It’s 1930s America as seen in the movies, through music, and the evasions of newsreels. Franklin Delano Roosevelt preaches prosperity while James Cagney slugs out the decade as a smart-tongued everyman — in a dozen different roles. Director Philippe Mora investigates what was then a new kind of revisionist info-tainment formula: applying old film footage to new purposes. 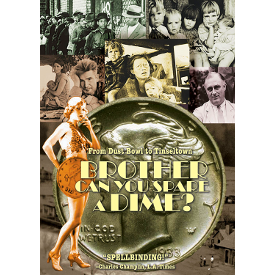 Years before he was briefly sidetracked into sequels for The Howling, Philippe Mora was an accomplished artist and documentary filmmaker. Backed by producers Sanford Lieberson and David Puttnam, his 1974 documentary Swastika pulled a controversial switch on the usual historical fare about the Third Reich — the archived film clips Mora chose illustrated not atrocities or armies on the move, but German citizens engaged in ‘neutral’ or positive activities, and going about their normal lives. Mora was making a point about historical perceptions, with the added message that we’re maybe not all that different. 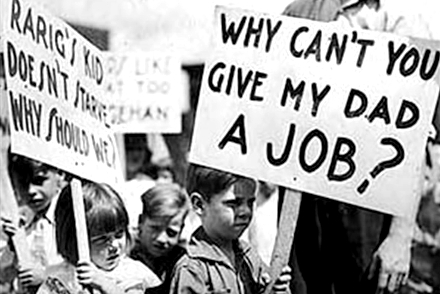 Mora’s innovative approach is much more common today: he uses ‘found’ film in a different context, to illustrate ideas not intended by the original filmmakers, in service of a new thesis. Divorced from a filmic context of ‘evil,’ Germans work happily in agricultural collectives, and Eva Braun socializes on the patio of Hitler’s mountain retreat. We’re forced to realize that it’s all perception. Even Hitler’s image can be ‘softened,’ with the right approach.

Mora and his producers followed up Swastika with an even more ambitious project, Brother Can You Spare a Dime Without narration and using only a few explanatory inter-titles, the feature length show tells the story of America’s Great Depression, using both news film and clips from feature films. The editing is everything, contrasting ‘real’ events with the reactions of Hollywood actors in old movies, mostly from the Warner Bros. library F.D.R. makes speeches about Fear Itself, and people like James Cagney listen to their radios. 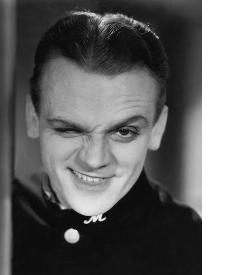 While other studios tended to sell a glamorous vision of American life, social comment and conscience was a concentration at Warners. They made enough movies about the Depression to form a backbone for the show — the Raoul Walsh feature The Roaring Twenties has big scenes of people reacting to Prohibition, or reeling from the crash of the stock market. Remember those expressionistic montages of coins stacking, and a ticker tape machine as big as a skyscraper? That’s here too, along with Busby Berkeley musical numbers that smile in the face of grinding poverty, like “We’re in the Money”. A Columbia clip of Frank Capra’s American Madness shows us a riot-like run on a bank.

A loose organization arranges clips into a chronology that hits all the main topics — bread lines, unemployment marches, union battles. ‘Forgotten Men’ go to prison and come out as gangsters, or go to Hollywood and become rich. The plight of the homeless and destitute comes out with frightening clips from movies that almost seem to be advocating revolution, like William Wellman’s Wild Boys of the Road. James Cagney is seen everywhere, snapping out dialogue zingers that express the frustration of the times, but also the cocky determination that everything’s gonna be okay. For patriotic fervor, the show falls back on surefire footage of James Stewart at the Lincoln Memorial in Mr. Smith Goes to Washington. “Sentimental idealism’ was a big part of the optimistic diet back then as well.

I at first thought that Mora’s film may have been inspired by the scene in Bonnie and Clyde where the bank robbers duck into a movie theater and see Ginger Rogers singing in a costume made of big silver dollars. In 1968, the 1930s seemed very, very far in the past. Although the timing isn’t quite right, That’s Entertainment! might have been an influence as well, if only its idea about repurposing old movies to make a new feature attraction.

The music woven through the montage-narrative is a hit parade of the decade, at least in terms of songs that relate to the national situation. The title song “Brother, Can You Spare a Dime?” is covered by Al Jolson, Rudy Vallee and Bing Crosby, while Ruth Etting’s “Ten Cents a Dance” depicts the crisis of a young woman forced to become a taxi dancer to earn a living. And what better tune to illustrate the nation’s thousands of new hobos than Harry McClintock’s hilarious “The Big Rock Candy Mountain”, or Bessie Smith’s “Nobody Knows You When You’re Down and Out”? Cheerleading for dreams of something better, or happiness for its own sake are “Hooray for Hollywood” and a Roosevelt campaign jingle. 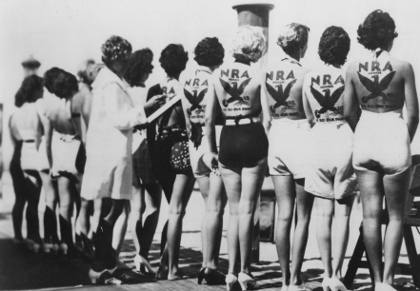 The show comes off as a real hybrid: a cultural history lesson that’s an entertaining hop, skip and jump through hard times. In 1975 the ’30s were something the older generation couldn’t seem to get us youngsters to appreciate, at least not in the ways they wanted us to; my parents didn’t realize that watching a diet of old movies was making me more comfortable with the ’30s and ’40s than with my own time.

Before home video one had to be an enthusiast to be familiar with old movies. Many of the clips seen in Brother Can You Spare a Dime were fresh content in ’75. I’m sure that the general public today would find most of the material just as unfamiliar — my fellow disc collectors and TCM watchers are numerous, but still a minority. Actually, Dime could serve as a terrific party game, with prizes for the viewer who can identify the most clips shown. It’s also a great quiz for actors of the decade, although the selection is again skewed toward faces seen in Warners pix.

The cannibalizing of odd film sources to put forth a political thesis reached a new height six years later with The Atomic Cafe, an insightful look at Cold War insanity laced with a dimension of morbid irony. It would be great if Cafe and Dime could be reconstructed from improved visual materials — most of the contents of both shows have been restored in better condition. 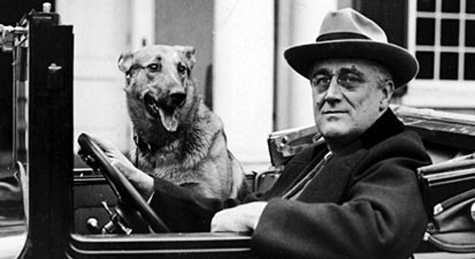 The Sprocket Vault’s DVD of Brother Can You Spare a Dime is a satisfactory encoding of this show made almost entirely from stock shots and licensed film clips. The clips were accessed and duplicated in ‘the old days’ before any of these films had been restored, so not all of them are in prime shape. Making the show an even more useful teaching tool is an extra, an hours’ worth of Pathé newsreels from the period.

I’m told that a Blu-ray is now available, but the review copy I was provided is a DVD.

A final thought: in 1975 the producers Lieberson and Puttnam probably used personal connections to obtain affordable access to all those film clips and celebrity clearances. In short order, stock footage that once cost only a few cents a foot suddenly became a gold mine. Today there is no such thing as an inexpensive film clip, excepting some public domain resources on the web. Producers now must have deep pockets to make a show like this one, and rights holders will hold them for ransom for anything special. When one sees a video documentary about the movies, it’s either very selective with clips, or the studio itself is the producer or one of the main producers. And that means that they have editorial power — in general, you won’t see a politically critical docu about old films.

It’s the same when trying to make a war movie — if you expect cooperation from the armed services, your project better be pro-military. Warners or MGM can’t stop you from making a show about studio scandals, crime or labor troubles, but they can withhold access to archival materials. The entertainment world isn’t publicly owned. If the powers that be ever decide to privatize the Smithsonian (which isn’t at all unthinkable), access to our own history may be controlled by profit interests as well.