An Encore Edition. Peckinpah’s macabre South of the border shoot ’em up is back for a second limited edition, with a new commentary. It’s still a picture sure to separate the Peckinpah lovers from the auteur tourists – it’s grisly, grim and resolutely exploitative, but also has about it a streak of grimy honesty. 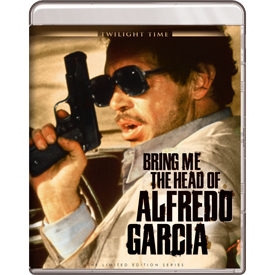 Nothing if not committed to the memory of writer-director Sam Peckinpah, Twilight Time reissues a sold-out disc with another limited edition pressing. The good news is that Bloody Sam fanatics have a second shot at this excellent-quality release. The other good news is that Twilight has sweetened the deal with a third audio commentary. More details below, after this ‘encore’ review.

A title long utilized as a takeoff point for jokes and spoofs, Bring Me the Head of Alfredo Garcia is actually one of Sam Peckinpah’s better pictures, at least from the autobiographical point of view. As the last film made before the director’s career dissolved in alcohol and drugs, it shows a personal commitment difficult to perceive in any of his subsequent work, with the partial exception of his one war movie, Cross of Iron. Peckinpah’s crumbling personality is strongly felt in the tale of a no-account gringo on a godforsaken mission on the back highways of Mexico, steeling himself for the terrible things he must do with a constant flow of booze. 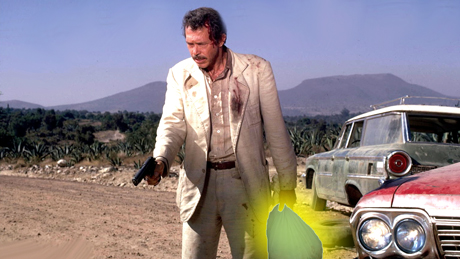 Thoroughly dissipated lounge pianist/drifter Bennie (Warren Oates) sees a way out of his moral and physical decrepitude when a bizarre opportunity comes his way. Through the underworld fixer Max (Helmut Dantine), land baron El Jefe (Emilio Fernández) puts out a huge bounty for the delivery of the head of Alfredo García, the man who impregnated his daughter. Bennie discovers that his quarry has since died, and takes to the road with his sometime-lover, call girl Elita (Isela Vega). His idea is to do some midnight grave robbing. Little does Bennie realize that Max’s unscrupulous operatives Sappensly and Quill (Robert Webber & Gig Young) have tipped him off only so that they can watch him do the hard work, steal his prize and collect the reward for themselves. More ugly adventures await Bennie on the road, like a biker (Kris Kristofferson) who threatens Elita with rape.

In mainstream audience terms Bring Me the Head of Alfredo Garcia is a thoroughly nasty crime tale featuring a despicable and physically filthy hero. A scene guaranteed to clear old ladies from theaters sees Bennie pouring alcohol onto his groin in an attempt to kill the lice he’s picked up. We never saw Julie Andrews do that, did we?   Gross-out aspects aside, the show has plenty to offer Sam Peckinpah addicts. What is possibly the director’s most freewheeling, off-the-cuff movie has a fine performance from Warren Oates, who stumbles and mumbles from one semi-improvised scene to the next. The actor seems at all times either drunk or hung over, yet he delivers his stream of consciousness dialogue like a master. Oates’ brief tenure as a leading man (Dillinger, Chandler) was surely squelched by this outing. Yet Peckinpah praised the film as his only movie released as he fully envisioned it.

Frank Kowalski and Sam Peckinpah’s original story is a grabber that combines the director’s marketable screen violence with a morbid theme that might have given Edgar Allan Poe pause. For at least half an hour Bennie races his car across the Mexican countryside, while on the passenger seat next to him rests a human head in a filthy gunnysack, partly packed in ice. Bennie carries on philosophical and personal conversations with the decapitated noggin as flies buzz around the car interior. He sometimes splashes liquor on the cabeza that he’ll soon swap for cold cash. It’s deliriously creepy, a sick expression of what a man’s gotta do to get ahead get by in the modern West. Distinguishing Bennie from the other bounty killers is his growing personal curiosity about the severed head. He soon needs to know why someone wants it so badly. Peckinpah mounts a number of impressive scenes in bars and on the road, and most of his actors behave as if genuinely slumming for a few extra bucks South of the border. Robert Webber and Gig Young’s intimidating homosexual hit men are given minimal exposition. Scenes in the low-rent hovels of Mexico City carry a depressing air of authenticity. By contrast, the formal doings in El Jefe’s palatial hacienda are like something from an earlier century. A priest and nuns look on, and a gallery of black-clad women observes through veils. Too much of an old-school warlord to be the ringleader of a modern drug cartel, El Jefe brings back associations with The Wild Bunch — actor and director Emilio Fernández is thoroughly in charge here, and a thoroughly scary presence.

Unfortunately, this is where Peckinpah’s lousy judgment kicks in. Alfredo Garcia is also packed with lazy and stupid exploitation scenes. The most insulting sees American biker Kris Kristofferson and a pal simply show up on the road, and escort Elita away from Bennie for sex at gunpoint. The dull scene (shot day for night) seems to exist only so that Peckinpah can indulge himself with yet another shot of a woman’s clothing being ripped away. That Elita gives herself to her rapist voluntarily shows Peckinpah’s latter-career ineptitude with female characters (no slur on Isela Vega’s brave performance). As was the case with the beautiful but meandering Pat Garrett and Billy the Kid, the Kristofferson scene could be removed entirely without a disruption in continuity. It’s just commercial padding, with another pal of Peckinpah making a cameo appearance to help make the movie marketable. The director’s trashy instincts also yank the rug out from under the film’s otherwise lyrical and dramatic opening. El Jefe’s pregnant daughter is put on trial and tortured to make her give up Alfredo García’s name. As if unable to think of any other bit of business to add to the scene, Sam has two of El Jefe’s retainers strip her as well. The grindhouse audience surely approved but it comes off as simply coarse and lazy filmmaking. Peckinpah may be a “Gutsy maverick” but by this time his movies use women almost exclusively as exploitable, abuse-able objects.

Peckinpah’s action scenes play like self-parodies addressing his unfair reputation as a violence-mad hack. Warren Oates slings a mean .45 automatic, but Peckinpah films and edits his slow-motion shots of blood spurts and exploding bric-a-brack as if he were directing on automatic pilot. A roadside machine gun slaughter simply assembles uninspired coverage from Peckinpah’s multiple cameras, as extras line up for the express purpose of being mowed down. The only thrill is seeing the gleeful faces of Gig Young and Robert Webber as they hose down the location with machine gun bullets. Peckinpah’s violence in his gripping Straw Dogs showed some ingenuity. Here the tension doesn’t pick up until Bennie shoots up a gangland accounting office, and then goes all radical/existential/murderous in the tiled court of El Jefe. He finds himself surrounded by six trigger-happy Mexican marksmen, yet mysteriously beats them all to the draw. The last we saw of Pike Bishop in The Wild Bunch he was aiming for the sky as if trying to shoot God Almighty. For the final shot of Alfredo Garcia, Peckinpah’s editors give us the hollow visual of a machine gun firing directly at us, the audience. Far out, man…

Bring Me the Head of Alfredo Garcia has found proud places on both worst and best movie lists for forty years, so it must be doing something right. Critics and fans deeply committed to the Tao of Sam overlook its faults and see it as Peckinpah’s ultimate expression of rage: the warlord and the mob are surrogates for those hated suits at the movie studios. For this viewer the film is a definite mixed bag, an outrageous story just barely put across by a director who has lost all sense of proportion about himself and his craft. With Warren Oates embodying Peckinpah right down to the heavy dark glasses, the artist does make his statement — a commitment to a drunkard’s notion of personal honor. The Twilight Time Encore Edition Blu-ray of Bring Me the Head of Alfredo Garcia is a beautiful transfer, a repeat of the company’s 2014 limited release. On one of the commentaries it is amusing to hear commentator Nick Redman wondering about the state of the original camera elements. What we see looks pristine, while Redman was apparently monitoring a far less attractive file copy. MGM and Deluxe Digital’s transfer is so good, we can see when cameraman Álex Phillips Jr. changes lens filters for the close-ups of Bennie and Elita’s long “will you marry me” scene by the side of the road.

Twilight Time Encore Edition contains everything from the 2014 release, and adds one more commentary. The first old commentary with the ‘Peckinpah Posse’ of biographers (Paul Seydor, Garner Simmons, David Weddle) has been carried over, and a second allows Nick Redman to prompt associate producer & writer Gordon T. Dawson about his ten years working with Peckinpah. Dawson concurs that the director was in full self-destruct mode by the time Alfredo Garcia went before the cameras. Sam was better when drinking than when doing drugs, because with the alcohol he’d eventually pass out and give his minders some peace. Dawson’s description of Peckinpah’s behavior indicates a director that was rarely prepared, absented himself from the set, couldn’t remember his own instructions and heaped abuse and blame on everyone around him. Yet Dawson misses him deeply.

A brand new commentary brings back Paul Seydor and Nick Redman, this time with director’s assistant and longtime companion Katy Haber, for yet another perspective on the film. Whereas the Posse commentary had each author elbowing each other to explain their personal attachment to Sam and the second a Gordon Dawson reminiscence, here Ms. Haber is given a chance to tell the story of her association with Peckinpah from Straw Dogs through eight or nine more movies. Seydor and to a degree Redman see Alfredo Garcia as a beautiful movie and seem in denial of its more crass elements. I stand respectful of Paul Seydor’s knowledge and understanding of Sam Peckinpah, but when he assures us that the director’s nude scenes are always especially respectful and gentle to women, never exploitative, something really doesn’t add up. Likewise, saying that the film’s homosexual hit men are in any way groundbreaking or revolutionary, is just silly — there had even been a James Bond movie with a running gag about gay hit men.

The featurettes are repeats. Filmmaker and Peckinpah expert Mike Siegel offers two comprehensive interview documentaries, made in 2013. Passion and Poetry: Sam’s Favorite Film (55 minutes) gathers numerous Alfredo Garcia actors and personnel for an hour-long making-of show. A Writer’s Journey (25 minutes) sticks with biographer Garner Simmons, who was present for the filming in Mexico and played a small role as well. A third item puts Jerry Fielding’s music score behind a montage of ad posters and artwork. Six TV spots and the original trailer are also present.