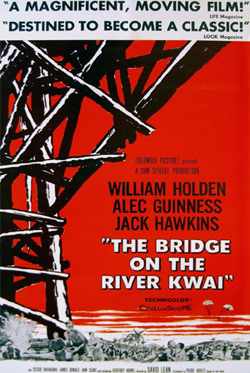 The Bridge on the River Kwai

David Lean’s 2 hour and 41 minute war drama was a box office smash in 1957, beloved not only by critics but World War II vets as well, regardless of the fact that its hero, played by Alec Guiness, is in fact an anti-hero, a by-the-book pedant whose obsession with military protocol only succeeds in aiding his enemy. The canny screenplay (by Carl Foreman) provides two compelling counterpoints to Guiness’ driven colonel in William Holden’s deadbeat sailor and Sessue Hayakawa’s weak-willed commandant. Lean’s masterful command of the widescreen action and intimate drama makes The Bridge on the River Kwai an endlessly re-watchable experience.