Do you love movies about cute animals? The original pet-lion-in-Africa romp is actually a well balanced nature film about the separation between wild animals and those raised by humans. Virginia McKenna and Bill Travers winningly play the Adamsons, game wardens that dedicate themselves to the well-being of Elsa, the lioness they raise from infancy. 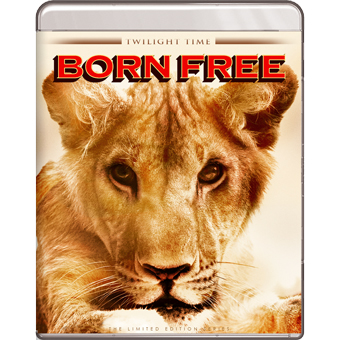 Savant normally becomes sullen and anti-social around overly committed animal lovers, I suppose because I think the world gets a little out of balance when people seriously consider their domestic pets as family members with full human rights. I’m not a dog or cat hater. I’m with the film Grizzly Man in that wild animals deserve to be left the hell alone when possible. The issue becomes even further clouded with the effort to close down circus-zoos like Sea World, and the uproar over that dentist who enjoys blasting down endangered lions when major animal species are disappearing at an alarming rate. I wouldn’t be all that surprised if next year’s Oscars Obituary montage showed a sentimental picture of a Black-horned African Rhino. I mean, they include agents now. 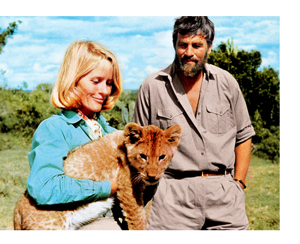 Movies about making wild animals into ‘pets’ of one kind or another have come a long way since the days of Frank Buck, when a nature film might consist of throwing two mismatched predators into a pit and rolling the cameras. Disney got in his licks, promulgating the lie that arctic lemmings have a furry Death Wish. The pioneering film seen here uses the old formula of turning dangerous animals into pets, yet takes many steps in a positive direction.

A sterling case of the family-animal film upgraded to quality status, Born Free is a fine entertainment that approaches its subject with maturity and grace. It became a must-see in 1966, aided greatly by a popular AM radio vocal by Matt Monro. The story of the lioness Elsa and her human parents may not teach us everything there is to know about lions, but neither does it insult our intelligence. The husband and wife animal-activist team of Virginia McKenna and Bill Travers are always pleasant company.

The story is a case of boy and girl meet lion cubs, keep growing lion, set grown lion free. African game wardens Joy and George Adamson (Virginia McKenna and Bill Travers) adopt three orphaned lion cubs when George has to shoot their mother. When they grow too big, two are sent to a zoo in the Netherlands. But Joy can’t bear to be separated from the smallest of the cubs, her ‘daughter’, Elsa, so George relents and they keep her. Elsa eventually becomes unmanageable, but instead of shipping the grown lioness away, Joy and George dedicate themselves to acclimatizing her to the wild, so that she can live free.

The producers of Born Free definitely got it right – at the last minute, unofficial producer Carl Foreman reinstated the Matt Monro song, the one that finishes the film behnd a shot of happy lions, ensuring that audiences leave the theater on a positive note. As Monro’s vocal hasn’t stopped playing since 1966, the John Barry score is still pleasingly familiar. In the tense scenes, it sounds a lot like his Thunderball music from the year before.

The show is basically the old story of a wild pet that becomes a member of the family, but it’s not an infantile embarrassment. The incredibly cute scenes of the lion cubs playing are right up front, and win us over without delay. Perhaps the practical issues of daily life with a trio of growing lions are a bit exaggerated, but Bill and Virginia are so down to Earth that we never get stuck in MGM bathos (“Don’t shoot my deer, daddy!”) or Disney idiocy (“Now those two bear cubs, heh heh, have a little fun in the kitchen!”). When the comedy comes, it’s pretty sly. I love the shot of three long, droopy lions being carried to a truck, like a trio of laid-back Pink Panthers. When the lioness Elsa reaches ‘womanhood’, the Adamsons’ acknowledge a healthy attitude about sex. They can make sly faces at one another (“Elsa’s in season now!”) and still keep the film on track.

Educators and Parent’s Magazine types naturally applauded the fairly realistic presentation of the wild animals, which are never given human qualities. Elsa is a pet and there are a number of staged scenes, but she’s never required to act like Lassie. The play in the surf scene wasn’t bettered until The Black Stallion came along. Even Virginia’s emotional attachment, that prompts the couple go to extraordinary lengths to make Elsa’s life a success, is placed in perspective. These people are uniquely qualified to let lion ownership be the governing principle of their lives. It isn’t the kind of MGM situation where adults are sacrificing all to save one motley lion, or some other kind of out-of-proportion arrangement. Actually, keeping tabs on Elsa is such a full-time job, we wonder how the Adamsons fulfill their other obligations as game wardens.

Director James Hill rarely merits a mention for this show, although he had a busy career. His short subject Giuseppina won an Oscar back in 1960, and his director’s credit is also on the Sherlock Holmes mystery A Study in Terror, and the Jules Verne action picture Captain Nemo and the Underwater City. Hill’s direction is really clean for this kind of movie. We see very little cheating or hasty cutting to avoid problems in the animal scenes, and he doesn’t try to ‘integrate’ mismatched old footage with new action.

Few other films have learned the lessons of Born Free. There’s the interesting Ring of Bright Water, also with Virginia and Bill, but sea otters aren’t quite as loveable as baby lions. That was the hook in 1966: we thought that baby cats playing was the most hilarious footage ever filmed… before YouTube. Television’s Ivan Tors exhausted the commercial prospects by engulfing us with animal shows, the kind that always ended like this: 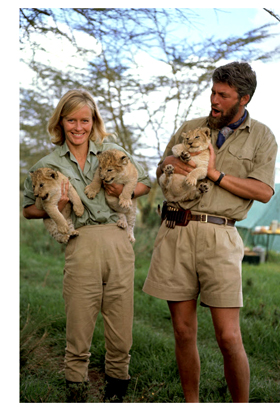 Father character:  “Well, I guess that takes
care of those poachers!”

( All laugh, then
Flipper / Gentle Ben / generic animal
responds by
chattering and dancing on its tail / woofing and
nodding its head / whatever )

Tors & Co. made a fortune, but really mucked up the genre with cross-eyed lions and zebras in the kitchen, etc., so much so that real animals rarely had a place in films. Unfortunately, an eventual sequel called Living Free retold the same story, only with over-hyped jungle dangers – animal attacks, floods, etc. The last film of this kind I paid any attention to was Free Willy. It turned out not to be a randy ad in the personals section, but another lamentable Lassie story where the problems of one lonely whale are much bigger than a hill of beans in this world, and don’t you forget it.

Born Free is a relaxing pleasure. The charismatic Travers and McKenna were dedicated to quality entertainment, often of an ecologically progressive nature. McKenna had become an icon of integrity for her playing of the patriotic spy Violette Szabo in Carve Her Name With Pride. When Bill Travers did a monster movie, it was the superior Gorgo, a colossal sea creature tale with an anti-exploitation, pro-nature subtext:

“… she turns, turns with her young, leaving the haunts of man, leaving
man to ponder the proud boast that he alone is lord over all creation.”

That’s basically what Elsa does at the end of Born Free, too, only with hugs and kisses. 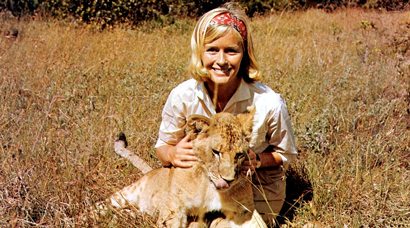 The Twilight Time Blu-ray of Born Free is a stunning presentation with a razor sharp image and gorgeous color. The improvement over the old (2003) DVD is easily seen. Even the occasional stock shot is well matched. The show was filmed over the better part of a year in full Panavision.

Twilight Time gives us a full Isolated Score Track for the famous John Barry music, which means that this Blu-ray doubles as an original soundtrack album.. Music specialist Jon Burlingame has a lot to say about Barry on the commentary hosted by TT’s Julie Kirgo and Nick Redman. Kirgo’s liner notes this time offer a dramatic counterpoint to the film, telling the true story of what happened to the real-life Elsa and the Adamsons’ marriage. Unlike the movie, sending their feline ‘child’ back into the wilderness didn’t work out so well. Born Free will have a special appeal to lovers of big cats and nature in general. And it’s highly recommended to anyone trying to teach kids what animals are really like.