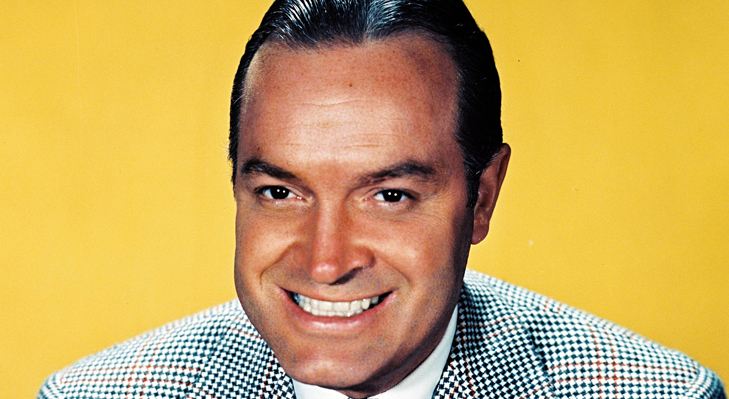 You pick up a lot of baggage when you live to be 100, a sentiment confirmed by the long, long movie career of Bob Hope. His unofficial status as the preeminent entertainer of the 20th century is open to debate but he was without a doubt that era’s most conspicuous comedian. Marlon Brando’s infamous dismissal, “He’ll go to the opening of a market to receive an award”, was mean-spirited but it had the sting of truth; for over eighty years Hope was everywhere, for better or worse. 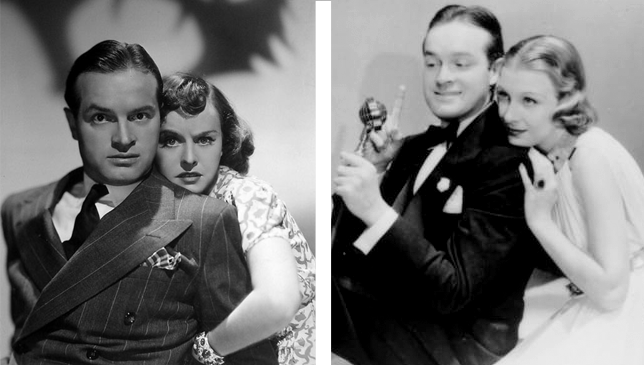 Living up to his nickname, “Rapid Robert”, the 31-year old Hope shot out of the gate in 1934 with a series of quick-on-their feet comic shorts revolving around his unique presence as a leading man and comical sidekick rolled into one. It wasn’t long before he was starring in pleasantly prosaic musicals like The Big Broadcast of 1938 and handsomely mounted farces like 1939’s The Cat and the Canary.

American audiences were hungry for diversion during the war-torn 40’s and Hope was eager to serve with stylish parodies like The Ghost Breakers and the frantic, fourth-wall breaking Road pictures co-starring Bing Crosby. The 50’s found him no less energized in comic book burlesques like Son of Paleface and Casanova’s Big Night. But as Hope maintained an Astaire-like level of dexterity in his craft, his schtick was beginning to out-live its shelf life. Meanwhile storm clouds brewed; the swinging sixties loomed just around the corner and with them a new audience hungry for something more than the vaudeville gags Hope had to offer. 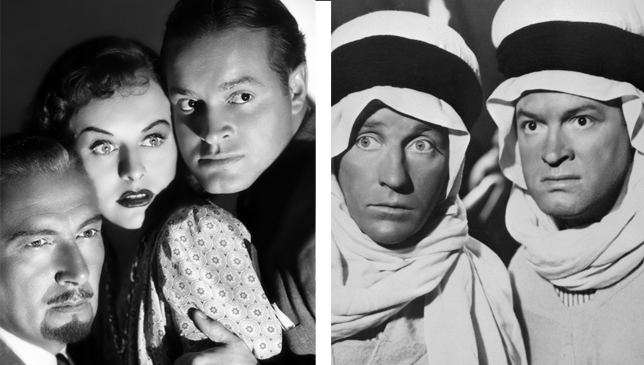 The sheer volume of his output (more than 70 films), not to mention his prodigious radio and TV career, would have broken the back of most artists. Yet Hope hung around, the late sixties finding him all but bereft of the lithe wit and easy charm that made him king-of-the-hill for over three decades. Like the aimless zombies of Dawn of the Dead who loitered around the shopping mall because it reminded them of “something they used to need”, Hope haunted the gate at Paramount just to fan the flame of a memory inching toward extinction.

Luckily Kino Lorber has decided to take up that flame themselves, releasing five of Hope’s mid-period comedies on blu ray. This bunch of films (spanning 1947 to 1952) only occasionally hints at his prodigious skills but, like the great comedian’s career, the results are a mixed but ultimately rewarding experience. 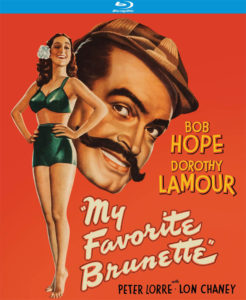 Elliott Nugent, a one-time actor turned director, had a sophisticated eye and brisk approach to storytelling that mixed well with Hope’s animated personality, a creative collaboration that first paid off in 1939’s The Cat and the Canary where the old dark house tropes were left intact allowing Hope to saunter in and lay waste to the spooky atmosphere.

The same holds true for Hope and Nugent’s 1947 My Favorite Brunette, a satire of noir thrillers in which the genre’s affectations are once again perfectly replicated; duplicitous damsels in distress, lonely rooms draped in dark shadows and cultivated but cruel villains who, particularly in the case of the smirking menace of Peter Lorre, are no laughing matter. 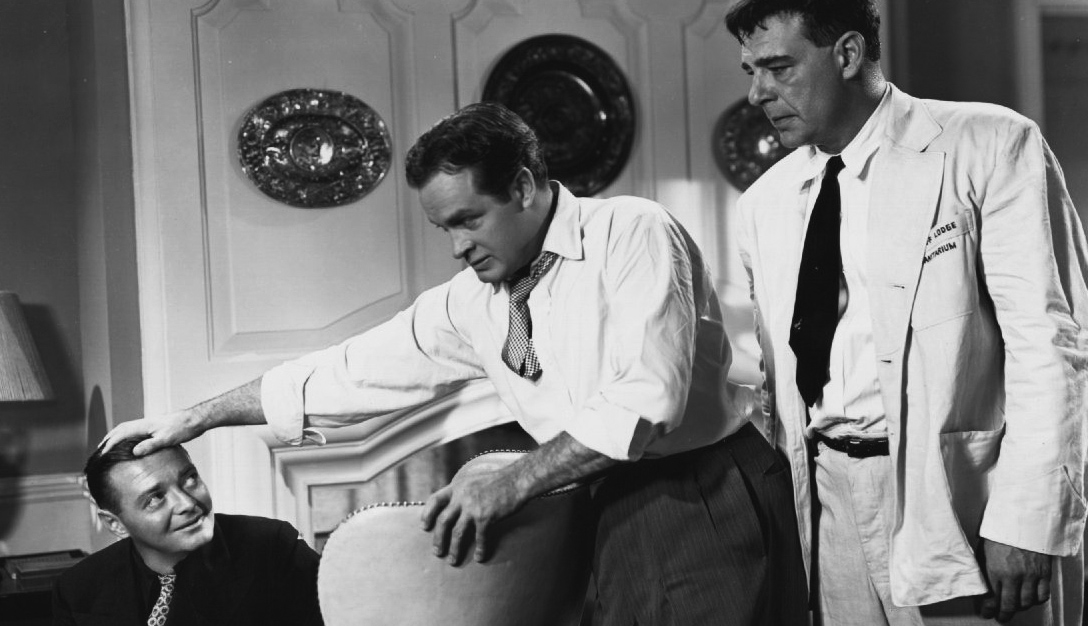 Hope plays San Francisco baby photographer Ronnie Jackson who dreams of ditching the diaper trade and becoming a private eye. Through the time-honored tradition of mistaken identities, Hope gets his chance when Dorothy Lamour appears seeking help for an uncle who’s been kidnapped by a spy ring. Lorre and Lon Chaney Jr. (offering the first of many send-ups of his Lenny character from Of Mice and Men) are determined to thwart Hope’s rescue attempts and their sinister back and forth provides most of the comedy.

With a script by Edmund Beloin and Jack Rose that hits all the right genre beats and Nugent’s typically facile direction, My Favorite Brunette is a solid Hope vehicle climaxing with a de rigueur but very funny Crosby gag. 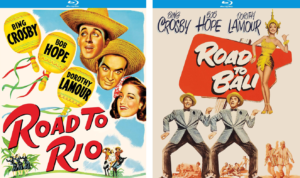 Speaking of Crosby, his early collaborations with Hope in the Road To… series were the personification of disposable fun, fueled by topical jokes from week-old newspapers and charming but usually forgettable songs. It’s the splendidly intuitive byplay between the two stars that keeps the Road films fresh and funny even today. Their globe-trotting adventures covered a lot of ground, scheduling stops in Singapore, Morocco and eventually Rio and Bali (that the boys never left the backlots of Paramount Studios was part of the gag).

After 1945’s Road to Utopia, the Road picture formula, with its outrageous plot turns and general disregard for logic, began to lean toward more conventional musical comedies with blasé storylines and production numbers almost entirely insulated from the rest of the picture. Still, under Norman McLeod’s savvy leadership, Road to Rio succeeds on its own merits.

Hope and Crosby sunk their own money in this film and the enhanced production values may have been the result of two cagey businessmen making sure all their bets were covered. They even borrowed the Andrews Sisters from Abbott and Costello for a buoyant novelty number with Crosby, “You Don’t Have to Know the Language”.

The fellas play two musicians who stow away aboard a Rio-bound cruise ship (shades of the Marx Brothers’ farce Monkey Business, also directed by McLeod) and land in the middle of a plot to swindle a beautiful heiress played by Hope and Crosby’s perennial heartthrob, Dorothy Lamour. The film constantly threatens to lose the plot (and often does) but it’s an entertaining shambles, particularly in contrast to its follow-up. 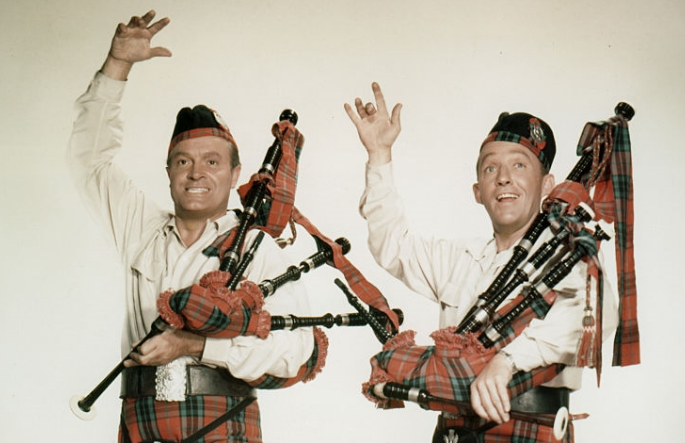 From their inception the movie posters for the Road pictures were illustrated in blazingly bright colors but it wouldn’t be till Road To Bali that audiences would be able to see the boys in all their Technicolor glory. Unfortunately Technicolor can’t make the jokes in this 1952 release any funnier. Hope, Crosby and their writers seem to suffer from tired blood and they’re not helped by director Hal Walker who serves mainly as a traffic cop for the film’s calculated shenanigans.

The movie was shot concurrently with that year’s Son of Paleface and Bali literally advertises Hope’s western spoof with a cameo from Jane Russell. Part of the fun of the Road pictures was that the audience always felt like they were in on the joke, but here Hope’s naked self-promotion has a mildly rapacious feel. Those audiences could have cared less, Bali was one of the top box office draws of the year. 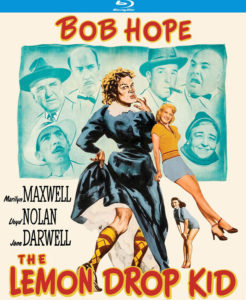 How many Christmas movies give us the opportunity to see William Frawley and Tor Johnson side by side in Santa Claus suits? That unlikely duo are just two of the affable mobsters featured in 1951’s The Lemon Drop Kid, directed by Sidney Lanfield and adapted from a story by that sentimental Broadway fabulist Damon Runyon. Hope plays the titular crook who organizes a phony charity to help repay his debt to a cantankerous crime boss (played by Fred Clark).

Lanfield was an efficient journeyman director whose resume was stocked with comedies, musicals and drawing-room dramas but his most successful effort may have been 1939’s sleekly mounted version of The Hound of the Baskervilles, notable for Basil Rathbone’s debut as the supercilious sleuth Sherlock Holmes. Lanfield certainly seemed more at home in that film’s gloomy atmosphere than in light comedies and it shows in his adaptation of Runyon’s story. Hope himself is oddly subdued but he’s nevertheless confident and relaxed and the film (with a little help from an uncredited Frank Tashlin) is a predictable but satisfying holiday farce. 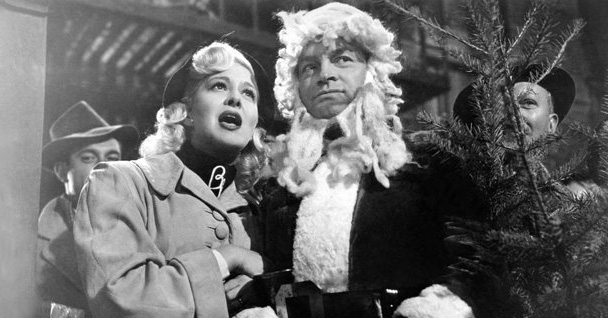 As a side note, The Lemon Drop Kid, once again found Hope acting as a premiere introducer of classic songs adding that holiday perennial Silver Bells to a catalog that already included Thanks for the Memory, and Buttons and Bows. 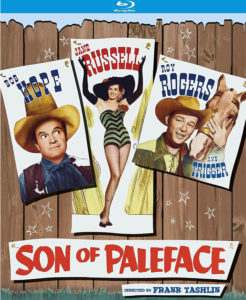 Frank Tashlin turned to live action after a long stint directing some of Warner Bros.’ greatest cartoons. After his little-seen marital comedy The First Time, Tashlin teamed with Bob Hope for Son of Paleface, a follow-up to Hope’s enormously successful 1948 cowpoke parody, The Paleface. Hope is the cowardly offspring of the similarly squeamish “Painless” Potter, the cowardly dentist of the original directed by Norman Z. McLeod. Clearly not wishing to mess with success, Son of Paleface is basically a retread with Jane Russell once again the strapping amazon who whips the bad guys into shape while Hope cowers on the sidelines.

While Tashlin’s cartoonish instincts drive most of the film, the gags are consistently half-baked and Hope is (literally) running through the motions. And even for those who love Roy Rogers (and I do), his all-American boy schtick feels out-of-place in Tashlin’s Looney Tunes atmosphere.

Kino Lorber has done an excellent job with these long neglected titles, in particular My Favorite Brunette, a public domain eyesore and long a prisoner of atrocious video releases, the film looks remarkably fine in this new version, fitting because this savvy noir spoof stands out as the most rewarding of these new releases.

The image quality of Road to Rio is shaky with more than a few faded and overly grainy sequences while Bali looks ripely colorful and reasonably sharp. Lemon Drop Kid and Son of Paleface both look terrific, the blacks are deep and the image quality is nicely honed in each film. Son of Paleface’s palette, somewhat more muted than most Technicolor offerings, is still radiant and the image’s sharpness feels just right.

The discs include a small but worthy assortment of extras including a commentary from Michael Schlesinger and Mark Evanier on Road to Bali  and a commentary by filmmaker Greg Ford on Son of Paleface along with 1946’s The Lady Said No, an animated short by Frank Tashlin.