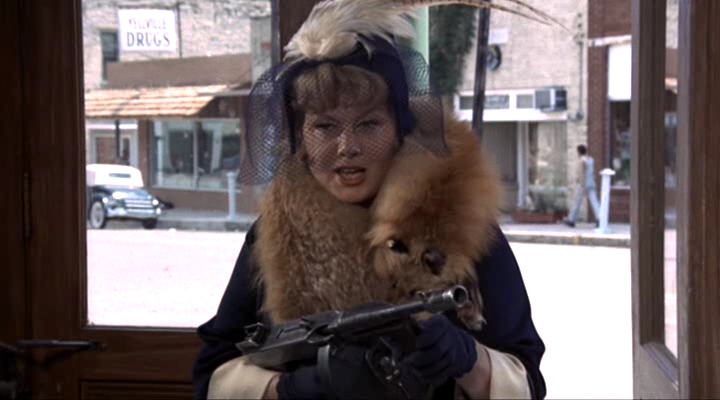 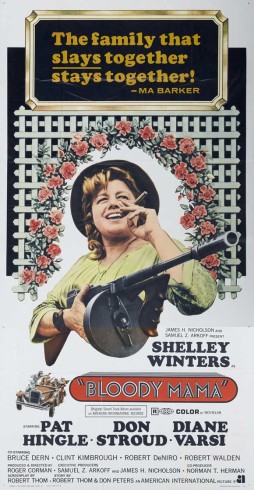 BLOODY MAMA, based on the depression‑era exploits of Ma Barker and her homicidal progeny, is one of the most substantial films in producer‑director Roger Corman’s prolific career, and certain to enjoy an enthusiastic reception from action fans and others drawn by some of the more exotic sex angles. Although for the most part the violence is more underplayed than might be expected, there is plenty of excitement and prospects are very strong for exploitation houses and drive‑ins. For Southern markets especially, the AIP release holds promise of becoming one of the most popular attractions in recent years. Filmed entirely in Arkansas, most of the action is of the sort that helped make BONNIE AND CLYDE a hit.

The period atmosphere, car chase sequence, and the serio‑comic Barrow‑like bank robberies will inescapably invoke comparison to the Arthur Penn film, but MAMA is strong enough to stand on its own as an individual entity. Corman’s characteristic stylization and injection of quirky humor make this a somewhat more offbeat proposition than its title might suggest, and imbue what could have been no more than a cheap exploitation picture with moments of genuine sensitivity and dramatic impact. Under this sometimes eclectic but always riveting control, Robert Thom’s uneven screenplay seems as much a nostalgic evocation of a past that was both the worst and best of times as it does a gangster epic.

Shelley Winters’ portrayal of Ma Barker at first appears overly flamboyant, but as the film progresses, she develops into a thoroughly credible, near‑tragic “outsider” in the Corman tradition. Cheated by the times, she envisions herself as a decent, God‑fearing American simply trying to make a better life for her sons‑through robbery and murder. Forced as a child into sexual relations with her own family, Kate Barker raises four delinquent sons in rural poverty, quitting her weak‑willed husband to take to the road with her offspring, each of whom emerges as a distinct personality. The psychotic nature of Don Stroud, the eldest, manifests itself when he kills a passenger during a robbery on a country ferry, in a scene which shifts deftly from comedy to horror. Youngest son, Robert Walden, a homosexual masochist, introduces boyfriend Bruce Dern into the gang, while son Robert DeNiro becomes a drug addict.

Clint Kimbrough is a more stable sort, taking after his father. Stroud’s prostitute mistress, a frizzy‑haired and decidedly unglamorous Diane Varsi, also joins the group. Practicing her own brand of motherly love, Ma sleeps with all her sons and Dern, while ruling the gang with an iron hand. After some minor bank jobs and a couple of murders, the Barkers’ big moment comes with the kidnapping of industrialist Pat Hingle. Ma orders him shot, but the boys fail to carry this out because his eyes are like their father’s, a recurring Corman motif. “G‑men” catch up with the Barkers in Florida and a furious machine‑gun battle ensues with a fascinated group of picnickers watching from nearby. Finally a boozy, disintegrated Ma sees each of her sons killed, and as she goes to embrace Stroud, he turns a machine gun to his face and fires.

Supporting performances, not usually a strong point with Corman, are exceptionally good. Stroud and DeNiro are the most forceful Barker sons, and Hingle’s understated performance is all the more remarkable for being played almost entirely while blindfolded. Dern has little to do, but as usual, does it memorably, and Pamela Dunlap is fine as a girl whose chance meeting with DeNiro leads to her murder by Ma. Flaws lie in some substandard post‑synching and a few too abrupt transitions, particularly that of Ma from violated child to monstrous mother. Interpolated newsreel footage from the period appears inserted more to plug narrative gaps resulting from last‑minute cutting than to enhance authenticity, but does supply a welcome counterpoint. Apart from a bogus “downhome” title tune, Don Randi’s score is restrained and, at times, even powerful.