Good and evil are depicted to some degree in almost every movie.  I tend to view any character drinking wine as “good,” which leads to some confusion when screening “Rosemary’s Baby.” 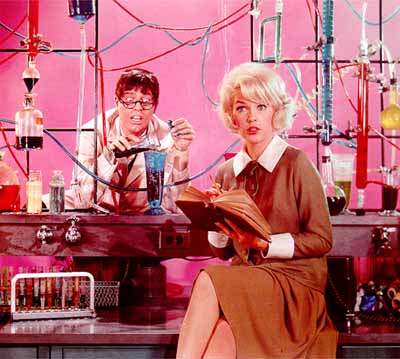 In “The Nutty Professor,” Jerry Lewis portrays both good and evil in his dual role as the goofy chemistry prof and his suave, slick alter-ego.  Lewis has stated that the characters represent both sides of the good/evil coin, a coin I received in change at Whole Foods the other day.  President Lincoln is heads, while tails shows Honest Abe mooning us through the columns of the Lincoln Memorial.

Observers have speculated that Lewis patterned Buddy Love after his former partner Dean Martin, but the Clown Prince of France says that was not the case.  He has expressed regret for not making the Love character more overtly evil.  It seems most of the fan mail went to B. Love, not J. Kelp.

While perusing the notion of Jerry Lewis as Jekyll and Hyde, the question arises: What kinds of wine would Julius Kelp and Buddy Love drink?  At least it arises for me, a few more times a day than I’d like to admit.

Kelp – the hapless nerd – probably knows either too little or too much about wine, just like in real life.  Most folks who know just enough about wine seem boring to those at the low end of the spectrum and dimwitted to the other side.

Love – the cool hipster – would probably drink Champagne from a little-known artisan grower, if he drank wine at all.  In the film, Love orders a drink like this: “two shots of vodka, a little rum, some bitters, a smidgen of vinegar, a shot of vermouth, a shot of gin, a little brandy, a lemon peel, orange peel, cherry, some more scotch.”  Paraphrasing the bartender, you can either drink it or take it home and rub it on your chest.

Lewis has brought “The Nutty Professor” to the stage, off-Broadway.  How far off?  Try Tennessee.  It’s the last stage musical completed by Marvin Hamlisch before his death in August 2012 and there are hopes it will make it to The Big Apple.

A natural wine pairing for “The Nutty Professor” is Hugh Hamilton’s Jekyll and Hyde Shiraz Viognier.  The McLaren Vale producer says the wine is co-fermented, both disparate grapes picked and fermented together rather than being blended after separate fermentation.  This is how they prevent unwanted hair growth after consumption.  (You didn’t believe that last part, did you?)

Jekel Vineyards – This Monterey County producer has Riesling for the hipster in you, Merlot for that other side.

Hyde Vineyards – In Napa Valley’s Carneros section, this vineyard provides grapes to a number of stellar winemakers.  They don’t have cherries, orange peel, vermouth or scotch.

Jerry Lewis’ Pinot Noir – Sold by an animal shelter in Wisconsin, if this Chilean Pinot has any connection with Jerry Lewis beyond his name on the label, it’s well hidden.

Jekyll and Hyde Coffee and Wine Bar – So which is which?  Before the triple espresso, and after?