Exploitation films have their mavericks, their patron saints and their bad boys: this well-researched and lovingly assembled shock-bio introduces us to a particularly talented persistent filmmaker whose sexed-up horror & action grindhouse non-epics proved commercially viable even into the video age. Then comes the Ghastly Death part, a cruelly undeserved finish for a movie guy liked and admired by his collaborators. 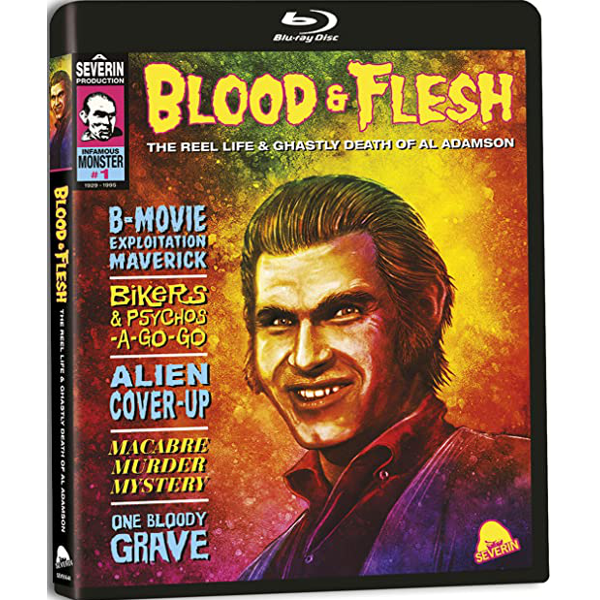 What makes lower-echelon exploitation producer-directors so interesting?  I think it’s because they put it all on the line. Every film student born imagines himself boldly directing movies that set the world on fire. We secretly admired our peers that were able to put together any kind of dramatic release, against the odds. We didn’t admire the older schlockmeisters that ground out grindhouse fare, the carny types that made no claim whatsoever to making quality goods. But we did have to admit that they knew how to stay in business, one way or another.

Now they’re considered Cult Filmmakers. Whether they were charlatans, thieves, or sincere movie-lovers, these fly-by night filmmakers stayed in business for a long time, proving that somebody got paid or that their collaborators believed in them. The great movie Ed Wood is largely fiction, turning the woebegone moviemaker into a clown. But old Angora Eddie had loyal friends; he’s a regular George Bailey of the flea pits. Normally there’s not much to say about the one-hit wonder independent filmmaker. They tend to be treated cruelly by critics and business people that measure everything in terms of commercial success. Quite a few made little money from films that got major releases. I have associates that actually knew Phil Tucker and had long conversations with Tom Graeff, back in the day.

Compared to them the subject of this film was a big businessman… on a small scale. Blood & Flesh: The Reel Life & Ghastly Death of Al Adamson tells the story of the man behind ‘Independent-International Pictures.’  The company made perhaps 25 separate movies between 1965 and 1990, that with myriad re-titlings may account for twice as many releases for theater and TV. Adamson’s story is told in a fast-paced welter of film clips, new interviews with his surviving collaborators and older archived interviews with Al and others that have passed on. Evidence that Adamson had what it took to entice ‘name’ talent to join his crazy parade act in his films comes with clips of actors like Paula Raymond, Kent Taylor, Tommy Kirk, and especially John Carradine. We are told that Carradine was so professional, he could pop out of a stupor, snap out instantly-memorized dialogue, and between takes go back into mental hibernation. Many of these people returned to work for Adamson time and again: it either had to be love (his companion Regina Carrol) or guaranteed cash on the line, or — they just liked to work.

To explain the money end one of the interviewees tells us that when someone demanded their pay during a shoot, Adamson left the set and came back later with a pile of bills and coins — he’d collected on the paper route he ran to make ends meet.  Effective producers know that opportunity is everything. Adamson acquired the enthusiastic services of Oscar-nominated Russ Tamblyn because the timing was ideal: the terrific actor simply needed money to fund his art-craft lifestyle. Tamblyn then came back for a second Adamson film. In his interview, Tamblyn expresses awe that, when he finally met Quentin Tarantino, the film the director wanted to talk about Satan’s Sadists.

We learn that Adamson came from a ‘movie’ family in that his father produced his own cowboy pictures back in the day. Bitten by the moviemaking bug, Al started with marginal exploitation-horror fare, eventually adding a loyal partner, Sam Sherman. If a show didn’t get enough bookings they’d recut it with new commercial content, adding go-go girls, more gore or entire new subplots. Grindhouse distributors only bothered themselves with the poster art and the title — who cared what went up on the screen?   The word ‘Blood’ gets recycled a lot. Filled with migraine-inducing dialogue, pasted together with add-on material, some of the films are more Frankensteinian than Adamson’s rubber-faced Frankenstein monster (which is fairly original-looking, at least). The abysmal Horror of the Blood Monsters tacks a color sci-fi premise onto several reels of B&W footage from a Philippine opus about cavemen and bat monsters. Bogus science blather about a phenomenon called ‘Spectrum X’ motivates the intercutting of color scenes with color-tinted B&W material. (top poster ↑ )

Dreadful is the word for most of these pictures. Blood & Flesh gleefully shows us highlights of sex and gore, none of which is particularly convincing. But the thorough, sincere interviews tell us that a great many sort-of-in-the-industry veterans loved Adamson and loved working on his pictures. One hilarious interview gives us a finance associate who became ‘Zandor Vorkov’ to play a vampire for Dracula vs. Frankenstein. Forrest J. Ackerman reportedly coined the name. Dubbed the worst Dracula ever, this guy looks no more appropriate for the role than did Ed Wood’s chiropractor. Jammed into his mouth are the same dime-store fangs that we bought as kids (I probably still have a pair here somewhere).

I’ll die most any place, but please don’t make me die in INDIO.

Blood & Flesh has a killer final act. Instead of tapering off it becomes a scary real-life mystery, an all-too credible case of SoCal horror.  Al Adamson filmed at the Spahn ranch and luckily didn’t become heavily involved with Charlie Manson — even though collaborator John ‘Bud’ Cardos tells us that he had to physically remove Charlie from one of their shoots!  But much later, when Adamson was winding down his affairs with his second wife at houses in Las Vegas and Indio, he got involved with a handyman ‘contractor’ who got too close, envied Adamson’s wealth and freedom, and started stealing from him. Then Adamson simply disappeared one day. Blood & Flesh benefits from a great deal of actual footage of Riverside County deputies digging up a suspicious new floor where an old Jacuzzi once was. The tearful testimony of Adamson’s housemaid adds appreciably to the drama — she obviously thought a lot of him too. The maker of sleazy horror & sex pictures ended up the star of a genuine ‘ghastly death,’ the kind of demise that almost nobody deserves.

The show incorporates lots of odd material without losing its shape or momentum.  Adamson’s unfinished UFO movie shows him becoming attached to the flakiest of conspiracy theories, and Sam Sherman says he was a serious adherent to the craze. Al’s second wife Stevee Ashlock infers that Al met an actual Alien being living amongst us. It’s a bit hard to make up our minds about Al, who in interviews and photos looks . . .  well, like a slightly shifty character. His associates say he was cheap and didn’t always pay, yet they insist he was a great guy who enriched their lives. That’s enough of an endorsement for me… I just don’t want to meet his contractor.

Apologies to residents of Indio.

Severin Films’ Blu-ray of Blood & Flesh: The Reel Life & Ghastly Death of Al Adamson plays as a solid commercial item, and is certainly tops in the field of docus about marginal filmmakers. Thanks to the excellent video footage of the murder investigation, the true-crime framework gives Blood & Flesh crossover potential into the ‘dark investigation’ reality genre. Director David Gregory has cooked up a true-life Sunset Blvd. tale, on a different scale of Hollywood sex and glamour.

Director Gregory made the queasy horror offering Plague Town in 2008, and in 2014 the excellent documentary Lost Soul: The Doomed Journey of Richard Stanley’s Island of Dr. Moreau.  If I’m reading events correctly, Lost Soul has singlehandedly reignited the directing career of Richard Stanley. Even if it lacks the star power and flashy insult battles between Marlon Brando and Val Kilmer, Blood & Flesh is just as engaging. It floats a somewhat jokey, pop-docu editorial style, perhaps imposed by editor Mark Hartley, the director of arresting pop docus like Not Quite Hollywood: The Wild, Untold Story of Ozploitation!  Verbal questions raised in the narration and interviews are frequently answered by humorous dialogue lifts from Adamson’s features. It gives the show more momentum, even as it reminds us that the movies in question aren’t exactly great filmmaking.

Severin’s extras are surprising. For Blood & Flesh we’re given some outtakes, a dreadful promo reel for the unfinished UFO docu Beyond this Earth and an endless poster gallery. The disc also contains an entire second feature, Adamson’s The Female Bunch from 1971. The lurid quasi-western has plenty of sex, mutilation and riding around in Utah scenery. Lonesome cowboy Russ Tamblyn tumbles in the wrong haystack and ends up with a cross carved into his forehead, a Squeaky Fromme Special. The print on view was cobbled together from a few surviving projection prints, so delivers authentic grindhouse sleaze appeal. The extra feature presentation comes with its own extras. The Bunch Speaks Out (15.5 minutes) collects some actress interviews. One of them talks about taking her son to the show, only to find out that Adamson had given her nude scenes using a body double. Two minutes of footage deemed too damaged to make the feature presentation are collected from a VHS source. Also a trailer, with typically brain-numbing narration copy: “Turning Women’s Lib into a Menacing Reality!”

Severin has been putting together lavish, elaborate collections of outré exploitation filmmaking, as with 2018’s Blood Island Collection. (I still like the Cholorphyl Man.) Concurrent with the release of this docu is a massive Severin Al Adamson: The Masterpiece Collection. What looks like the filmmaker’s full output is presented on 14 discs, plus a whole book. In this instance, I think the use of the word Masterpiece is pretty inspired appropriately cheeky.