It’s hard to know much exaggeration is used in movies about crazy Suth’un politics, when some of the serious movies resemble Julius Caesar with mint juleps. This true story is about an old-school populist Louisiana governor who falls for a nationally-known stripper, the famous Blaze Starr, and is told from the stripper’s POV. Paul Newman is at his late-career best, and Lolita Davidovich lights up the screen. The governor can get away with most anything except what he wants to do most — pass some color-blind laws about hiring and voting. 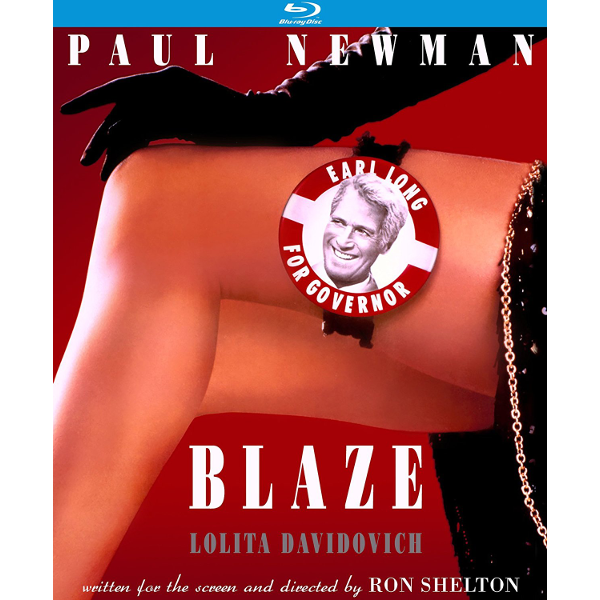 “Never trust a man who says ‘Trust Me.'”

That’s mother’s warning before Belle Fleming leaves her tiny rural home in the South. Not only is it good advice, but the girl is a fast learner. The future Blaze Starr has soon mastered the distinction between a nightclub stripper and a lady, even if circumstances make it better not to be too public about it. Blaze is an entertaining true (?) tale of love and politics in Louisiana circa 1960, written and directed by Ron Shelton of popular Bull Durham fame. It generates the appropriate overheated strip-club ambience when needed, but ends up as a funny, endearing love story about a pair of idealized Show People — she on her runway, he on his barnstorming political jags. The only nagging drawback is that the elder politico Earl Long can’t have looked this handsome, no matter how bedraggled Paul Newman tries to make himself. We can also wonder if the real Blaze Starr was quite the noble princess that this movie makes her out to be. 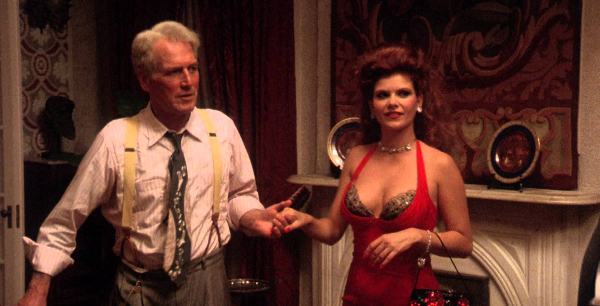 A young woman (Lolita Davidovich) with no real singing talent strikes out on her own and is discovered in a diner by promoter Red Snyder (Robert Wuhl). He gives her the name Blaze Starr and starts her off as a stripper of the tease & leave ’em happy variety. Migrating to New Orleans, she becomes the object of lust for the eccentric governor ‘Uncle’ Earl Long, brother of the assassinated Huey Long of the depression era. Although Long must hide Blaze from the press, she proves an emotional aid and eventually a staunch supporter of her political boyfriend. She stands by Huey even when his opponents try to have him committed to stem his progressive ideas about racial equality.

“Now that is the finest bunch of yes-man ever assembled.”

Paul Newman continued to star in interesting movies as he got older. Although a liberal, he didn’t fall into the trap of making pictures with a consistent political slant. Newman stuck with Robert Altman through the director’s slump (Buffalo Bill and the Indians, Quintet) but maintained a healthy variety in his projects: Slap Shot, Absence of Malice, Fat Man and Little Boy. Still one very handsome man and arguably a better, more mellow actor after his years of experience. In Blaze he retains the swagger of Hud, now joined with enough gravity to carry a complex role without effort.

Ron Shelton hands Newman a part that requires a lot of Big Acting. Earl Long is a moderately progressive thinker in a notably backwards part of the country. To be effective, he uses plenty of old fashioned attention-getting behavior, and when he really gets rolling, plenty of people think he’s gone out of his head. With the Civil Rights Movement underway, Long’s good-old-boy cronies see his efforts to integrate hospitals as political suicide, not a start toward racial equality. Earl’s outrageous antics are rarely on the level. He’s not above storming the state legislature to protest, or punching out foes in the opposition. Newman’s screen authority is such that he can play this crude, rude man without giving offense. Earl Long is an infantile womanizer and as slippery a politician as ever was. The film’s key dialogue arrives when Blaze observes that politics is a lot like show biz. Earl is quick to agree.

“I’m tellin’ you, we gotta quit sleeping with ’em at night and kicking ’em in the day.”

Long’s liberalism works in Shelton’s favor by giving Blaze a P.C. attitude in a setting where progressive ideas about racial equality were anything but popular. By showing Long as somewhat ineffectual and motivated more by personal intransigence than personal commitment, Shelton avoids the usual trap of movies that want to impose present-day ideals on less enlightened times. We instead see a vulgar man whose eye on the future is unappreciated. He can only be described as an Enlightened Bigot. In his fight for equal voting rights for blacks he uses the word ‘nigger’ as often as any of his peers. We definitely fall on Long’s side when his opposition has him committed to a state hospital. With Blaze Starr’s help, Long dodges this setback by firing the medical examiners, all of whom he appointed, and serve at his pleasure. That development seems particularly relevant in today’s politics in Washington.

Just the same, the best thing in the picture is Lolita Davidovich (Gods and Monsters), who matches Newman for spirit and strength. Although a Serbian raised in Canada and England Davidovich delivers a convincing Southern accent. Actresses that want to be taken seriously no longer do nude scenes, and she manages the ones here with dignity and aplomb. As the kind of stripper who dishes out dirty patter to ‘the boys’ instead of putting on a straight sex show, Blaze Starr maintains a certain dignity, the finer points of which are lost on the general public. She and Earl begin their torrid love affair, commencing with a hilarious scene where he wears boots to bed for traction. The affair provides the perfect ammunition for his political foes. Pro-integration, shacking up with a harlot, provoking controversy in public = crazy man.

New Orleans circa 1959 comes off as a foreign country with an entirely different political system. Long openly discusses methods of serving another term in office by gaming the state laws; you’d think he wanted to set himself up as king for life in Louisiana. His racist cronies are opposed by old boys even more openly racist. As always with a Newman picture, the faces are well chosen: Jerry Hardin, Gailard Sartain. Richard Jenkins of last year’s The Shape of Water is a journalist forever hitting Long with difficult questions. He always manages to sidestep, distract and disengage.

“A man in public office has to be discreet in his indiscretions.”

The tempest in the governor’s mansion in Blaze reminds me of the movie Ada. It’s about a governor (Dean Martin) with a wife who’s an ex-hooker (Susan Hayward). She helps him solve his political problems in a more flamboyant fashion. Since Ada was released about the time of the events of Blaze, there’s only a superficial connection, and because none of the after-dark strip-show life could be pictured, we wonder what the fuss is all about when Susan Hayward is accused of being a hussy. Shelton handles the last chapters of Blaze quite well. Blaze gets her defeated man in shape for a long-shot run at a congressional office. She works on the sidelines, but the script doesn’t turn the stripper into a king-maker. 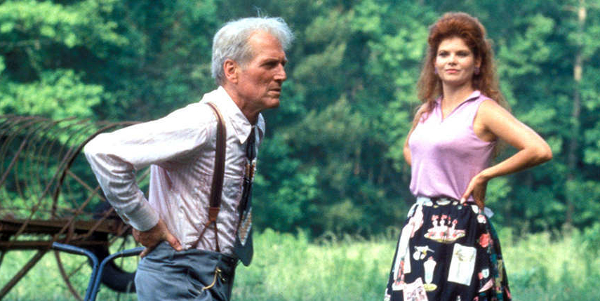 Blaze has a great sense of humor. It’s less raucous than Bull Durham but steers away from becoming a girly show farce. Blaze shows up for dinner with the governor (he does the cooking himself) in a scandalous dress and is openly insulted by the wives of his yes-men (one of them, I believe, is the real Blaze Starr). When Earl buys Blaze a panther for a pet, her ‘heat’ is compared to that of an animal. The big cat is useful to scare away the pesky reporters. An awful-looking stuffed bobcat with a stupid taxidermy grin on its face proves itself good for a last-minute joke. To remind us that the story events are real, some authentic Earl Long audio bites are heard over the end credits.

American politics can be so crooked colorful that we have to remind ourselves that this is supposed to be a true story. The only real strain on credibility is that Paul Newman looks too hale and hearty to be the supposedly aged and broken-down Earl Long, a man with serious medical ailments. When he falls faint on election day, we really think it’s just a passing problem. 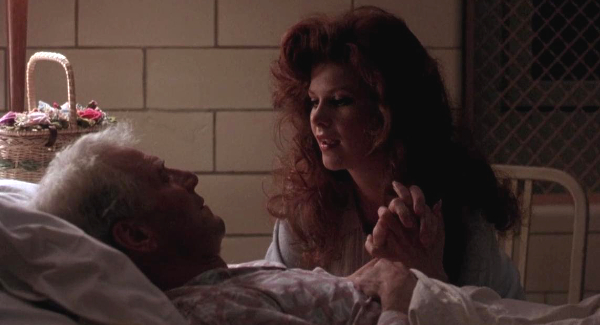 The KL Studio Classics Blu-ray of Blaze is a good-looking disc. Don’t be fooled by the somewhat dirty title sequence, as it’s the optical that’s dirty, not the film itself. The balance of the picture looks great — Haskell Wexler infuses the screen with warm tones and naturally lit interiors.

I was right to be confused by the foggy mountains under the titles; my perception of Louisiana is that it is a flat state ready to flood at any moment. Ron Shelton’s full commentary straightens it all out — the story starts in West Virginia, which is where Blaze Starr came from. She was already a success in Baltimore before heading south.

Shelton’s commentary discusses the story’s sources, telling us things such as the fact that Blaze did indeed name herself, and that she had such a head for business that she soon owned a string of clubs of her own. On the other hand, detractors of the film say that Blaze Starr didn’t play such an important role in Earl Kemp Long’s life or career. They may have a point — the movie skips a lot of ‘details.’ Earl had a wife at home all through his career. I don’t recall her being mentioned in the movie, or Earl denounced as an adulterer. The movie also implies that Earl had little money, which isn’t so. It was his wife that committed him to the state hospital.

Also included is an original trailer.