An admiring nod to ’60s dream siren Daliah Lavi! American-International leaps into an epic Jules Verne comedy about a trip to the moon, a good-looking but slow and unfunny farce that must squeak by on the goodwill of its cast of comedians. Burl Ives is excellent casting as P.T. Barnum, promoting a Greatest Show OFF the Earth. 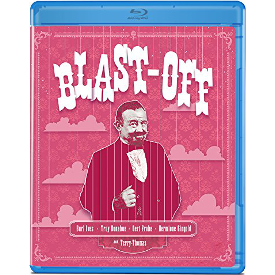 I was just mentioning various movies that I persist in wishing were better than they are. This colorful Jules Verne fantasy seemingly gathers all the filmic Tinkertoys to insure success, so what happened? The answer resides with producer Harry Allan Towers. In radio in the 1950s he was such a creative whirlwind that The New Yorker wrote him when he was working with Orson Welles. Next came English television and finally feature films, doing cut-price features for Seven Arts and American-International. An original runaway wheeler-dealer, Towers specialized in taking advantage of subsidies in countries encouraging foreign productions. He would eventually chase around the globe from one host country to the next — Spain, Turkey, even South Africa during the worst years of Apartheid. He got his start taking advantage of tax incentives in Ireland, with The Face of Fu Manchu. Next came this rather extravagant Jules Verne fantasy for A.I.P. in conjunction with moneyman Nat Cohen.

Compared to Towers’ productions with Jesús Franco, 1967’s Blast-Off is a lavish affair. It’s a period picture filmed in Panavision and dolled up with ten name actors. The original English title Jules Verne’s Rocket to the Moon echoes the tradition of the family-fare Jules Verne adaptations begun a decade before by Disney and Michael Todd. The American title Those Fantastic Flying Fools seeks an association with the big 65mm hit family comedy, Those Magnificent Men in Their Flying Machines. How it ended up with the Blast-Off title, I have no idea. Was it chosen for TV use? Or was it perhaps tacked on to enable a stealth re-issue?

Towers cobbled together the stories for many of his movies. Written to formula, Blast-Off shapes up as a talky, episodic show with a thin central narrative around which are clumped four or five additional comic side-stories. Fleeing his creditors after his circus burns down, impresario P.T. Barnum (Burl Ives), accompanied by his friend General Tom Thumb (Jimmy Clitheroe), latches on to the idea of promoting an expedition to the moon. German inventor von Bulow (Gert Fröbe) has perfected an incredibly powerful explosive, while the English engineer Sir Charles Dillworthy (Lionel Jeffries) has plans for the projectile-capsule rocket that will transport Tom Thumb to the moon (although Barnum doesn’t tell Thumb about this part of the plan).

Dillworthy is dropped from the project when the American balloonist Gaylord Sullivan (Troy Donahue) displays a superior projectile design with landing rockets that enable the passenger to return to the Earth alive. Gaylord is courting the elegant but clueless Madelaine (Daliah Lavi), but she keeps forgetting that she’s engaged to the wealthy Frenchman, Henri (Edward De Souza). Meanwhile, Dillworthy teams with his dastardly brother-in-law Harry Washington-Smythe (Terry-Thomas) and his equally corrupt friend the Duke of Barset (Dennis Price), to skim away the money that Barnum has raised for the project. That’s when the romantically- frustrated Henri comes forward with an offer to personally bankroll the moon shot. His gesture pleases everyone but Gaylord: the deal stipulates that the American must serve as the first moon-voyaging astronaut.

Towers borrows ideas from other movies to give his large cast something to do; seventy percent of the feature is comprised of sub- Benny Hill gags, with cartoonish characters doing silly things. Gert Fröbe clowns around on a beach in painfully unfunny skits testing his new explosive, accompanied by a squadron of uniformed German helpers. For one gag he tests a mini-cannon he’s attached to his helmet. Lionel Jeffries pouts and complains as the total-jerk inventor, who can’t understand why his suicidal one-way rocket plan has been rejected. Terry-Thomas and Dennis Price do their best to amuse with their sneering villainy, but a single film can sustain only so much eye rolling and mustache twirling. One running gag with Terry-Thomas does work exceedingly well — he steals gas from individual homes to power his gas automobile, hooking up a rubber hose to their lighting outlets.

The actors work hard at the jokes, in their period costumes. Towers has found a stately Irish home or two to provide most of the interior settings, and the England we see leans heavily on rolling Irish greenery, as had been the case with Towers’ Fu Manchu movie. Actor Burl Ives’s scenes work well mainly because he’s an excellent P.T. Barnum. Perhaps Ives didn’t realize how sloppy the film would be overall, for his playing is worthy of a much better show.

The story drags out in isolated skits, which I can’t resist relating to the fact that the credited screenwriter was best known for Carry On movies and a season of The Benny Hill Show. Everybody has a ‘funny’ sidekick. The midget General Tom Thumb works well as a companion for the enormous Barnum, but Fröbe and Terry-Thomas both have hapless, long-suffering assistants. Also sneaking around is a Russian spy, Bulgeroff (Joachim Teege) who applies himself with unfunny zeal to the task of sabotaging the rocket, or better yet, hijacking it. 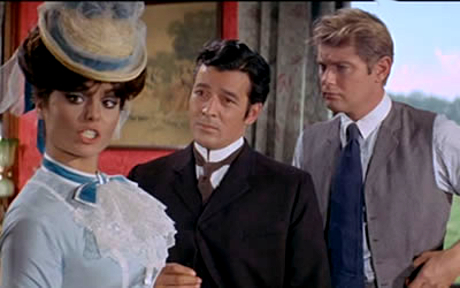 The romantic sub-plot gets little traction simply because it’s so insubstantial. The Gaylord – Henri rivalry is weak, and Madelaine’s silly behavior is poorly motivated. The love triangle is purposely made Victorian-stiff, but no satirical angle emerges. It picks up only when Madelaine discovers the villains’ evil plan to sabotage the rocket. To get her out of the way, Terry-Thomas spirits Madelaine away to the Bawdy House of Angelica (Hermione Gingold), an unlikely establishment in the rapturously green Irish English countryside. Gingold is yet another notable actor in for a day’s work and most likely paid cash on exit. Seeng the faux-innocent Madelaine put under threat in a house of ill repukes sounds like a great idea, but the result just amounts to ten extra minutes of skulking around, raised-eyebrow close-ups and weak jokes. If that’s not enough, an assistant played by Graham Stark also starts a romance with a passing lady, which results in more humor on park benches, Benny Hill- style. The comedy has too much clutter and not enough focus.

Director Don Sharp previously helmed Towers’ The Face of Fu Manchu, which tried to stretch too few resources to feature length. Although many Blast-Off scenes play out on empty beaches and lonely hills, Towers and Sharp do manage set pieces with enough costumed extras to fill an epic-sized screen. The most notable is the large launch-pad setup, apparently constructed in a quarry. Even Queen Victoria (Joan Sterndale-Bennett) shows up to wish the rocket-projectile a safe journey. A fairly impressive full-sized prop rocket is transported by wagon through the countryside. And the interior set for the spaceship is at least amusing, even if not as clever or as detailed as earlier exercises in Victorian art direction. Blast-Off’s real problem is a story with little forward momentum, which is never as funny as it thinks it is. With the combined talent on screen, we watch Blast-Off expecting general hilarity to break out at any minute. Two hours later, when the show is grinding to a finish, we’re still waiting.

The Olive Films Blu-ray of Blast-Off is a great-looking transfer of this rather tame comedy. Forget memories of old flat TV prints, for the Panavision expanse is usually filled with colorful period bric-a-brac. John Scott’s busy music does its best to perk up the comedy, but does better with a slight romantic theme.

I saw the movie new (as Those Fantastic Flying Fools) in a Redondo Beach theater one evening while visiting an aunt. I checked a head shop across the street first, and remember looking at all the hippie-themed posters. The second feature was Frank Sinatra in The Naked Runner, which I liked a lot. Fantastic Flying Fools should have been right up my alley as I was a Jules Verne and H.G. Wells fanatic from an early age. All I remember is that people were excited but nothing seemed to be happening.

Twenty years later, I met Harry Allan Towers briefly at a Cannon meeting to straighten out a deal with some movie he’d shot in South Africa. How perfectly appropriate it seemed for the Cannon Group to be working with people willing to make a buck from that regime. Towers said little because we were just handing over a cut of a trailer. He was dressed in a full suit, and was accompanied by a young woman suitably attired for a lawn party, with a big hat. A dapper little man, he looked a lot like the character actor Gene Lockhart, already dressed up to play a part in a movie.

Now I look at Blast-Off and realize that the version I saw was surely a cut-down, by either ten or fifteen minutes. The show simply doesn’t sustain interest for a full two hours. I’m not sure that cutting would make it better, but on this viewing my mind wandered off the movie, to that imagined task.