Fox touted Black Widow as the first murder mystery in CinemaScope. Ace writer / tyro director Nunnally Johnson tries an ‘All About Eve’ dissection of Broadway swells but in a mystery context, with beaucoup flashbacks. The result is something akin to Rope, with scenes all taking place in apartments with views of Central Park. Nobody complained about the big marquee names Ginger Rogers, Van Heflin, Gene Tierney and George Raft, but I re-watch to marvel over the dreamy, interesting Virginia Leith. Raymond Durgnat encouraged us to indulge our screen fantasies! 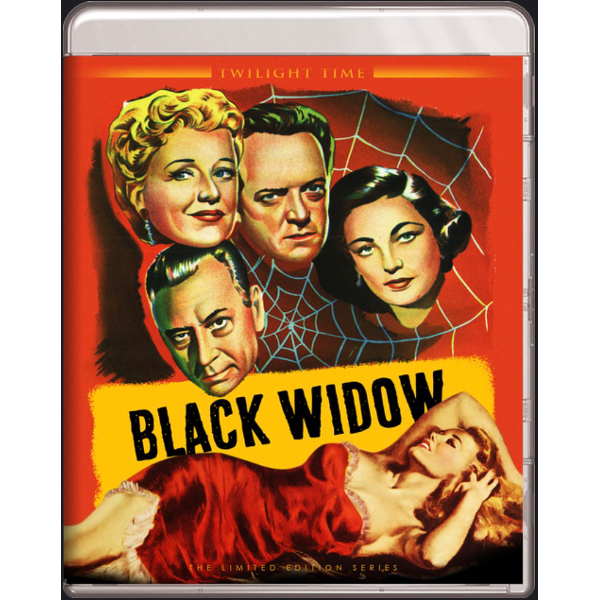 Dialogue of this sort is best delivered by somebody with at least one Oscar nomination! Nunnally Johnson wrote, produced and directed this slick Fox murder whodunit set among the New York theater crowd. One of the earliest CinemaScope productions, it suffers from lumpy construction yet continues to appeal thanks to an uneven, interesting cast. Ginger Rogers is an outspoken and imperious Broadway star, and Van Heflin is a man unjustly accused of infidelity and then murder. Former child actress Peggy Ann Garner (Daisy Kenyon) is only adequate as an unstable Broadway wannabe. The film’s main problem is that star billing immediately reveals the identity of the murderer.

The story is unspooled in and around several extended flashbacks. Aspiring writer Nanny Ordway (Peggy Ann Garner) comes to New York from Savannah. She stops briefly with her Uncle Gordon Ling (Otto Kruger), an actor currently working in the latest hit play starring Lottie Martin (Ginger Rogers) and produced by Peter Denver (Van Heflin). Nanny rooms with artist Claire Amberly (Virginia Leith) long enough for Claire’s brother John (Skip Homeier) to form a crush on her. She also meets Lottie Martin’s househusband Brian Mullen (Reginald Gardner). Peter Denver’s wife Iris (Gene Tierney) stays away for several weeks, so he allows Nanny to use his high-rise apartment to write in when he’s away at work. But when Denver brings Iris home from the airport they’re greeted by a horrible scene that requires calling Detective Bruce (George Raft). Within a few hours, witnesses claim that Denver was having an affair with Nanny, an accusation that he has difficulty disproving.

Black Widow is an entertaining but flawed murder mystery that makes use of Fox’s declining roster of contract talent, and not in the best way. Did each of the stars owe the studio a picture? Van Heflin plays yet another good guy framed for murder, and comes off fairly well. But the transparent mystery renders some characters wholly superfluous, like Gene Tierney’s show-biz wife. [Tierney’s high billing belies her minimal contribution to the film; we wonder if a) Ginger Rogers lobbied to reduce her role, or if b) Ms. Tierney’s mental-emotional issues mandated changes.]

The surprise is Ginger Rogers, who was once irresistibly likable in everything she played. Rogers’ Lottie is much too obnoxious when trying to pull off a Bette Davis-like diva impersonation, and her dramatic fits at the finale show lack the finesse associated with the actress. The actress had a similar problem in 1955’s Tight Spot, a noir thriller that she seemingly took as a star showcase. Playing against the material to favor her character, Rogers warps an otherwise fine film out of shape.

With Rogers hogging the spotlight, Reginald Gardiner’s obvious weakling is pushed into the wings, despite doing well in one scene where he proclaims his odd status as a celebrity’s husband. The filmic non-entity George Raft is on autopilot as a dull detective. Peggy Ann Garner’s Nanny Ordway is a variation on the generic Eve Harrington character, a young woman that tries to get ahead by forcing herself into the lives of important people. Nanny charms her peers and makes an irresistible show of her supposed innocence and enthusiasm, only to plot and scheme like a fresh-faced Lucretia Borgia. The real enjoyment comes from watching the non-stars. Bea Benaderet and future TV mogul Aaron Spelling appear in small roles. Skip Homeier is barely on-screen, but beautiful Virginia Leith makes a strong impression — she looks as if she’d make an excellent ‘hip chick’ beatnik in the Carolyn Jones mold. Leith won a series of odd but memorable roles, starting with Stanley Kubrick’s odd first film Fear and Desire. In Violent Saturday she’s the object of a Peeping Tom, but she capped her career by making something worthwhile out of the worst role imaginable, the hypnotic disembodied head in the maudit Z-film The Brain that Wouldn’t Die.

Ace screenwriter Nunnally Johnson doesn’t put a whole lot of effort into Black Widow. The narrative doesn’t exactly cheat, but as mysteries go it’s rather lazy. Foolishly swayed by Nanny’s artistic pretensions (expressed in morbid music and poetry), Peter Denver is taken unawares. Before he knows it, he’s alone and hunted by the police, running around town trying to clear his name. Characters seem to exist only to hinder Peter Denver or to pose as potential long-shot murder suspects. Nanny’s poorly defined Uncle Ling is seen hiding a pair of women’s gloves, which turn out to signify exactly nothing. One of the film’s few insert shots singles out Detective Bruce picking up a note pad on which someone has scribbled some doodles. As the only other drawings we’ve seen are cartoons by Nanny, we know the doodle will become important evidence.

This was Nunnally Johnson’s second outing as director. His first was Night People, a smart Cold War suspense thriller filmed in West Germany. His work with actors is good in both films but his camera direction is much improved here — characters aren’t marooned at the opposite ends of the 2:55 screen quite as often. It took several pictures for Johnson to figure out how to use CinemaScope better; even his best picture The Man in the Gray Flannel Suit has a standard Fox-‘Scope flat appearance, that severely limits visual possibilities. Hey, where’s the Twilight Time disc of Flannel Suit?

The ‘truth’ about Nanny is finally revealed in a series of dramatic flashbacks related by Brian Mullen and Lottie Martin. These seem a serious cheat: if both of these witnesses are telling highly subjective stories, how can we accept their accounting of Nanny as an absolute truth? The film’s pat ending isn’t particularly satisfactory.

Johnson appears to have been mostly concerned with establishing an ‘All About Eve‘ milieu of showbiz sophistication, but it lacks Joe Mankiewicz’s theatrical grandeur. We instead are given dated ‘smart’ dialogue and vaguely unpleasant high-toned types. Typical is a scene with Gene Tierney’s elegant Iris, who we’re supposed to admire. When Iris finds Nanny’s coat on her sofa she immediately checks its label. Presumably discovering that the coat is some off-the-rack piece, Iris drops it as if it were garbage: this creature Nanny is clearly a ‘nobody.’ The message of Black Widow is that outsiders to showbiz need to be shunned like the plague.

The Twilight Time Blu-ray of Black Widow has been handsomely encoded in HD in its correct 2.55:1 aspect ratio. As with many early CinemaScope films, the movie is largely staged in wide master shots that make many rooms look as big as tennis courts, including Peter Denver’s apartment. The ubiquitous painted backdrops of Central Park aren’t particularly convincing either. Every once in awhile we see a shot taken on location, and the film immediately opens up. Charles B. Clarke also photographed Nunnally Johnson’s previous Night People, which is a veritable catalog of ways to mis-use CinemaScope. The tendency to stay wide is still in evidence, but Clarke and director Johnson do much better this time out the gate.

The extras are all ported from Fox’s 2008 DVD — even the Isolated Music Track, which indicates that TT honcho Nick Redman may have been involved. Welcome back is a commentary by Alan Rode, who reminds us that just a couple of years before a small-scale murder mystery like Black Widow would have been in small-screen B&W, not color, ‘Scope and 4-channel stereo. Rode scoffs at George Raft’s appearance as a working NYPD detective… the actor must have insisted on wearing an inappropriately refined wardrobe.

Also returned is an okay featurette about Ginger Rogers’ career at Fox, embellished with cute clips from Roxie Hart. Another brief piece on Gene Tierney tells us that during the making of Black Widow, the actress was already showing signs of a nervous breakdown and having difficulty reading lines. Along with the original trailer (that gives away the villain in its first shot), the disc showcases Leigh Harline’s score on its own track.

The film begins with a giant close-up of a black widow spider to launch the theme of females that murder their mates. The movie has neither a widow nor a mate-killing woman. The poster art used for TT’s cover also cheats, in that the film offers nothing to correspond to the illustration of the voluptuous ‘pulp fiction’ dame reclining in red silk. That creature is supposed to be Peggy Ann Garner?

As does Alan Rode, liner notes writer Julie Kirgo stresses that Black Widow pushed the then-strict Production Code, with the very fact that a character is revealed to have become pregnant out of wedlock, with the quasi-forbidden word actually used.