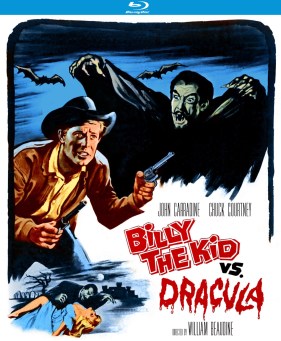 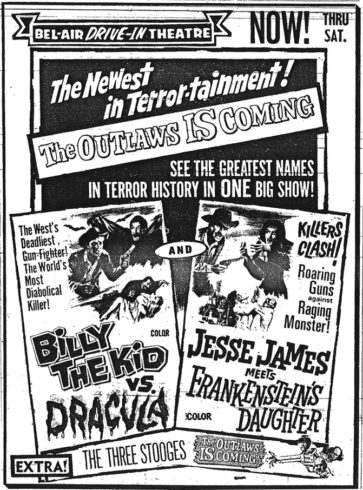 William Beaudine, the human assembly line behind a warehouse full of movies that included Voodoo Man and Bowery Buckeroos, hauls John Carradine onto an over-lit and under-budget stage for another shot at the Count in Billy the Kid VS. Dracula.

Shot in eight days, producer Carroll Case and writer Carl K. Hittleman conceived the title as part of a matched set for the drive-in crowd – both Billy and Jesse James Meets Frankenstein’s Daughter were shot back-to-back and arrived in theaters on April 10, 1966 (Jesse James, another fleabit western with gothic overtones, was also directed by Beaudine – the two “thrillers” would be his final feature films). 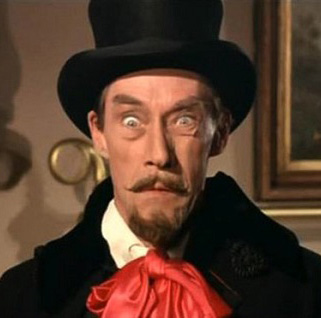 The popularity of TV westerns and the cresting monster-mania of the early 60’s made this thing possible – the craggy Count, dandied up in with a goatee and top hat, descends upon a dried up cattle-town called Wickenburg and latches on to local belle Betty Bentley as his vampire bride-to-be. The undead lech, apparently a fan of Shadow of a Doubt, insinuates himself into the family as Betty’s uncle, “Mr. Underhill.”

Billy the Kid, working incognito as a ranch hand, has his own ideas about Betty and is more than a little skeptical of the gaunt figure currently creeping around the campfire – when Billy’s not engaged in half-hearted barroom brawls he’s staking out the ranch-house in search of clues about his girlfriend’s funny uncle. 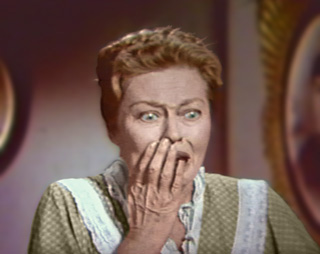 Virginia Christine, another member of Universal’s elite monster unit (she was a memorably ethereal Egyptian princess in 1944’s The Mummy’s Curse) embodies the perfect Nordic grandmama, whipping up a fresh batch of Wolf bane to sooth the suddenly wan young Betty. Meanwhile the townfolk hoot n’ holler, biding their time for something – anything – to happen.

The performances by Chuck Courtney and Melinda Plowman as Billy and Betty are no better or worse than the majority of westerns clogging that week’s TV Guide and there are plenty of familiar – and welcome – faces among the sparse crowd scenes including Richard Reeves, John Ford-favorite Harry Carey Jr. and the perennial blackguard Roy Barcroft (playing a jovial sheriff for once). 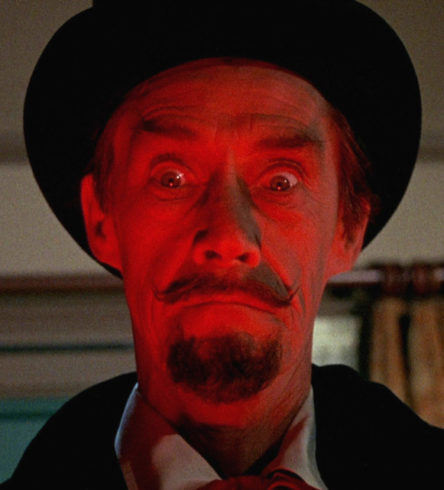 Transformed by a production of The Merchant of Venice when he was eleven, John Carradine’s zealous approach to his art opened the door to everything from The Grapes of Wrath to Myra Breckinridge – he could animate the most destitute Monogram film with a Shakespearean flourish while draining the last bit of juice from the tin-ear dialog. Carradine was a man invested in his craft – Beaudine was his polar opposite.

Throughout his career the industrious Beaudine kept his nose to the grindstone, directing almost 500 films by the time he retired – maybe he should have got up from that grindstone and looked through the camera every once and a while.

In Billy the Kid the director flouts his legendary incompetence – the moribund staging is expected but his sloppiness is unforgivable – bite marks appear on a victim’s throat before she’s bitten, a crew member’s reflection pops up in a window long enough for us to count the hairs on the guy’s head. Beaudine might as well be wrapping fish. 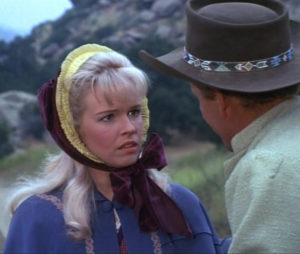 Lothrop B. Worth (I Was a Teenage Frankenstein) was the cinematographer and lit each frame like an operating room – occasionally a character will cast a shadow but more often than not the lighting has all the subtlety of a tanning bed.

Irony of ironies, Kino Lorber’s new Blu ray looks preposterously good – some of the garish color choices are as vivid as a Russ Meyer nudie. On the other hand the music score by Raoul Kraushaar is anything but colorful – it’s left to well-worn library cues to set the tone including a memorably spooky refrain that propped up Daughter of Dr. Jekyll back in 1957.

Kino’s Blu ray comes with a commentary from Lee Gambin and John Harrison and a few trailers that have little to do with the feature – they might have included the trailer for Edward Dein’s intriguing Curse of the Undead with a doom-ridden Michael Pate as a vampirized gunslinger. As a matter of fact, how bout it, Kino – Curse of the Undead on Blu ray?