Forget the ‘famous book’ doldrums — this exciting seagoing drama will take your head off. Criminally unseen and unheralded, Allied Artists’ classic is an impressive feat by director-co-screenwriter and star Peter Ustinov. It introduced Terence Stamp and provided Robert Ryan with a deserved career highlight. 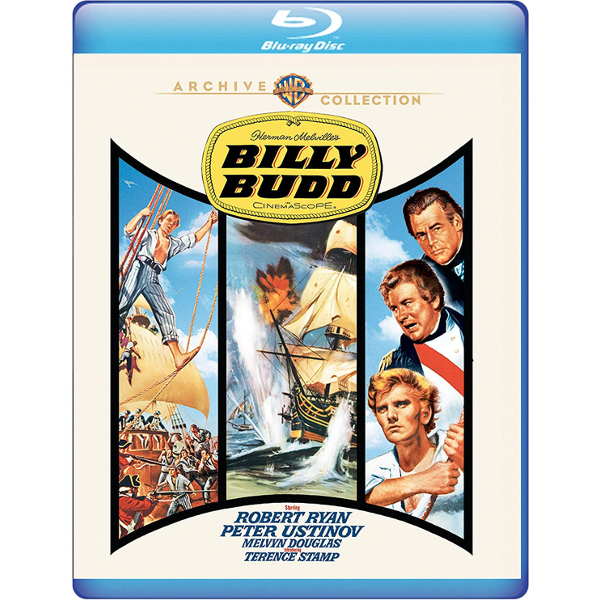 Talk about a book that works like gangbusters… When Warners’ first DVD came out in 2007 I found out that two of my children had read Herman Melville’s Billy Budd, Foretopman in high school. Their discussion impressed me. My oldest son explained that the Peter Ustinov version stresses some aspects of the story’s moral dilemma, but not others. The film is a superb, almost mysterious examination of the duties and obligations of men at war — to their country, their officers, to each other and to themselves. Seeing it as a simple conflict between good and evil between the Terence Stamp and Robert Ryan characters doesn’t do the story justice. The heavily symbolic book is given an insightful and subtle interpretation by the versatile Peter Ustinov, with an assist from writer DeWitt Bodeen. It’s easily the best Melville committed to film.

It’s 1797 in the Queen’s navy. The illiterate and inarticulate Billy Budd (Terence Stamp) is impressed from a merchant vessel to join the crew of the frigate Avenger fighting the French. Captain Edwin Fairfax Vere (Peter Ustinov) runs a tight ship, knowing that only by discipline can he keep his unhappy crew from rebelling: the ship’s contingent of armed Marines are necessary to prevent a mutiny. A hearty friend to all, Billy wins over even the most belligerent of his mates with his good spirits and fair attitude. But he soon runs afoul of John Claggart, the sadistic Master d’Arms (Robert Ryan). Claggart sees the need to verbally test Billy with suspicious remarks that the young man doesn’t really understand. He takes Billy’s smiles and weak answers as proof of disrespect and insubordination. Claggart becomes enraged at the idea of a sailor who doesn’t fear him, and resolves to use his authority against the innocent young man.

The moral dilemma conjured by Herman Melville for Billy Budd is both universal and timeless. In the brutal and extreme situation of men at war, authority and discipline can exact a terrible toll on the individual sailor, so much so that one’s own officers can seem more of an enemy than the foreigners on the opposing ships. Billy Budd sets up a recipe for disaster. Resentment and harsh discipline on the man o’ war are a given state of affairs, and the open-faced Billy upsets that balance with his simple goodness. Among the officers only the reasonable Captain Vere seems to appreciate Billy. Vere can envision a navy where the sailors serve because they believe in the mission and trust their officers, and not because they are threatened and whipped. 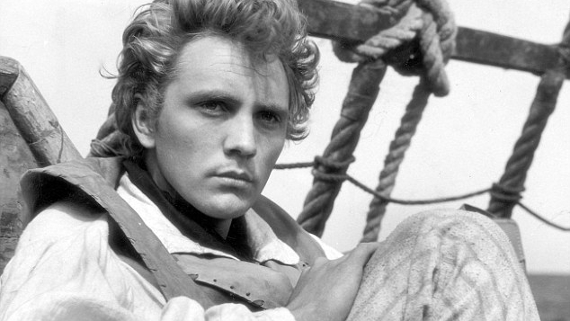 As with movies as diverse as The Flight of the Phoenix and The Wild Bunch, the story of Billy Budd is an exacting exercise in the way men relate to each other under harsh conditions. The sailors below decks are a cross section of strength and weakness. Billy makes friends with all of them, even though he first must fight the hotheaded Enoch Jenkins (Ronald Lewis of Mr. Sardonicus). The old sail maker Dansker (Melvyn Douglas, Hud & The Americanization of Emily) and others accept Billy for exactly what he is, uncomplicated and honest.

Above decks it’s a different matter. The junior officers (Paul Rogers, John Neville, David McCallum) stay neutral so as not to be accused of favoritism, but the malevolent Claggart firmly believes that no ship can run properly unless the crew is properly terrorized. Claggart enjoys the whippings on deck. He hides his cruel tricks from the captain and employs secret snitches like Squeak (Lee Montague) to impose his reign of terror. Billy believes in the fairness of his superiors and takes Captain Vere’s morale speeches literally. He bears no malice but also fears no man. He normally responds to authority with an honest smile and his own attempt at a chipper reply. But Billy faces an unreasonable foe in the murderously insecure Claggart, who assumes that any crew member not cowering before him, is showing disrespect. When faced with a hostile situation, Billy sometimes cannot get his words out. When he stammers, Claggart decides that the boy is mocking him. 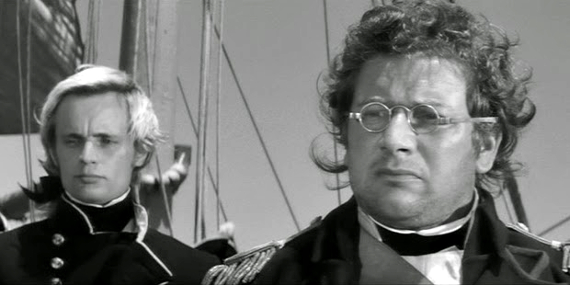 High school literature teachers analyze Billy Budd by deciding that Billy is The Christ, Claggart is Satan and Captain Vere an unhappy Pontius Pilate. But the problems in Billy Budd will be familiar to any person caught in a political bind — at work, in school, in any organization — where it seems that good intentions are defeated by the malicious application of the power of rank. After a shocking 3rd Act incident Captain Vere is put into an impossible position of condemning a man he knows to be essentially innocent. Protocol and the rules of the sea demand one thing and justice and decency demand another. Vere is supposed to do what’s good for the whole boat, not just one foretopman. Will dispensing mercy show weakness, and lessen the fighting ability of his crew? Will he be showing favoritism?

Billy Budd comes to a shattering moral climax unseen in most movies of this kind. Stanley Kubrick’s Paths of Glory faces a similar issue with nothing like the finesse and subtlety shown here — Glory chooses a situation where our only rational conclusion is to brand the officer class as murderers and swine. Captain Vere and his command are much more complex, and nobody is simply a villain. Even the black-hearted sadist Claggart is a product of the system, just as is Billy.

Billy Budd is a realistic adventure story with plenty of exciting incident. Ustinov filmed it aboard a real sailing vessel at sea, and the film looks it; we wonder if they suffered some of the practical problems recounted by Steven Spielberg in Jaws. Terence Stamp’s debut picture shows only one aspect of the actor’s talent, but he’s a perfect Billy … one never forgets his joyful cry, “God Bless Captain Vere!” In the context of the scene, Billy’s shout cuts like a knife. Ustinov’s masterful direction of actors can be criticized only when it comes to his own character. Conceived to serve as an audience surrogate, Captain Vere never settles on any particular mindset. He isn’t quite so vulnerable in the book. Perhaps that’s really evidence of directorial wisdom, and not a weakness.

Robert Ryan is incredibly good as the monstrous Claggart. Saddled with a career playing uninteresting soldiers and western bad guys, the really desirable Robert Ryan roles stand out like gems: The Set-Up, On Dangerous Ground, Men in War. John Claggart has uncommon depth; we watch his face for subtle changes of mood. When Ryan’s eyes start to go glassy we know trouble is on the way. Claggart teaches an important lesson about not just the armed forces, but any organization that gives chosen men absolute power over others. When the wrong man achieves a position of authority, even a small office setup can encourage serious sociopathic behavior.

The Warner Archive Collection Blu-ray of Billy Budd is a sterling presentation. Released through Allied Artists, the international production looks far different than a typical studio-made movie of its year. Although MGM’s Mutiny on the Bounty has shipboard scenes just as authentic and ‘open air,’ it was made for many times the cost of Ustinov’s picture. Using the improved 2nd-generation CinemaScope lens system, the B&W image is clean and sharp, giving us a good look at all the early-’60s acting talent. If you want to get the attention of someone under fifty, point out Ducky from N.C.I.S. and The Baron from Gilliam’s The Adventures of Baron Munchausen. They may think you’re trying to kid them.

A trailer is included. An added plus is a commentary in which the excellent film-talker Steven Soderbergh interviews Terence Stamp regarding his entire experience back in 1961. We hear good stories about several of the other actors as well Stamp’s reaction to landing such a showcase role for his first film … instant stardom resulted. The actor is both articulate and likeable. Soderbergh directed Stamp back in 2001, in the superior crime thriller The Limey.