Costa-Gavras sets his focus on right-wing political terror in the American heartland, where FBI agent Debra Winger finds farmer Tom Berenger at the head of a clan of murderous white supremacists. Our friends and neighbors! 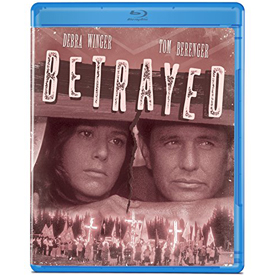 Filmmaker Cost-Gavras occupies a high roost where political activism is concerned. His most popular films ‘Z’, Stage of Siege, The Confession and Missing put strong values before wide audiences in the Nixon and Reagan years, when few major filmmakers would go near such touchy subjects. 1988’s Betrayed is equally bold but is also more of a Hollywood product. As liberal pictures go its message is surely one that needs to be delivered. In 1984 a Denver-based Jewish shock jock named Alan Berg was gunned down in his driveway. Berg had engaged in on-air arguments about anti-Semitism; the FBI later determined that he was murdered by members of a white nationalist group called The Order. Controversial screenwriter Joe Eszterhas’ screenplay turns the incident into a conspiracy thriller about a white supremacist group operating in the heartland wheat belt. Although the film has problems balancing its thriller elements with responsible filmmaking, it was certainly prescient, considering the big upswing in cultish anti-government paramilitary activity, and major terror crimes such as the Oklahoma City Bombing seven years later. Much farther down the line, we’re dealing with the same issues, with pro-gun paranoia and anti-government sentiment creating violent incidents disturbing enough to distort our entire political process.

Costa-Gavras’ classic political movies were filmed under frightening conditions: the dictatorial governments of Greece, Argentina and Chile might well have taken violent action against him, and two of the films had to be produced in secret. Betrayed suffers from being a full-blown Hollywood product with big stars, one that must function as a glossy suspense thriller. As such its extreme content is less effective than it should be, and in a couple of cases, in questionable taste.

A controversial radio talk show host (Richard Libertini) is machine-gunned to death, with the letters ‘Z O G’ spray-painted at the scene. FBI agent Michael Carnes (John Heard of Cutter’s Way) assigns his former lover, undercover agent Cathy Weaver (Debra Winger) to pose as a combine harvester operator. She’s dispatched to investigate farmer Gary Simmons (Tom Berenger), a widower whose wife died under mysterious, brutal circumstances. The emotionally deprived Cathy sees no wrongdoing in Gary, and in fact falls in love with him and his family. But after she’s assured Michael that her new boyfriend is innocent, Gary reveals the horrendous truth — he is at the center of a white supremacist group in league with anti-government radicals and even neo-Nazis. They killed the talk show host and have a plan to assassinate a wide range of enemies — opponents in the government, Jews, blacks. Eager to not repeat the mistake he made with his first wife, Gary takes Cathy into his confidence. He brings along on a morale-building nighttime ‘hunt’ — where his colleagues track down and shoot a kidnapped black victim. Cathy can barely believe that this is happening, and with a man she loves. Michael wants her to stay to get evidence against Gary, even though his hotheaded best friend Wes (Ted Levine of The Silence of the Lambs) is convinced that she’s a government spy.

Betrayed takes on a vitally important topic, but the typically shallow and exploitative Joe Eszterhas screenplay flattens it into a standard entertainment form. Cathy Weaver is much like Ingrid Bergman’s ‘love commando’ in Alfred Hitchcock’s Notorious, a woman who marries a man as part of a criminal/political investigation. Eszterhas makes a soap opera mess of the situation, giving Cathy a phony romantic history with her FBI boss. The script also muffs her behavior undercover — she’s forever sneaking out for pay phone calls and disappearing on long shopping trips. The fact that the supremacists don’t enforce tighter security is puzzling. Nobody can be anonymous out in this country setting where everybody knows everybody else’s business. Gary wouldn’t have to watch Cathy closely, when he’s got an entire community of radical traitors to help him out. It’s Invasion of the Body Snatchers in the cornbelt.

The whole point of Betrayed is that such Norman Rockwell Salt of the Earth types are actually vicious political radicals. I don’t doubt that thesis, but the show glamorizes them so much that credibility is shaken. All the farms look idyllic, at a time when banks and corporations were already close to wiping out the concept of a family farm. Agreed, Ted Levine’s Wes is a creep, but the kind of people that blow up government buildings and seize federal land at gunpoint to proclaim their own fiefdoms are freaks, not average farmers. The maniac Timothy McVeigh learned brutality as a soldier in Operation Desert Storm, and the ‘noble ranchers’ seizing land in Idaho are failed businessmen and malcontent ideologues. Betrayed spends a lot of time confronting Cathy with people oddly comfortable in the role of traitorous guerilla warriors. Her potential mother-in-law (Betsy Blair of Marty) is living a denial dream, solidly behind her son’s political radicalism while insisting on good manners and clean talk at the dinner table. Family friend Shorty (John Mahoney) is a sad guy who lost his farm (bankruptcy) and his son (Vietnam) to the ‘evil government,’ and is now happy to be a guerilla warrior. He’s both warm ‘n’ fuzzy and a maniac killer, a perfect ‘pod’ radical. A cursory look at real white supremacists and ingrate rebels shows something entirely different — unpleasant losers and gun nuts that take on irrational politics the way other people get obsessed with golf or radio control airplanes. And Eszterhaus lumps them all together. If you really want to rob banks and pull off mass assassinations, wouldn’t it be a good idea to lay off the recreational murders of black men for a while?

The killing of the kidnapped black man is a moral showstopper. To even go forward with a business-as-usual thriller after such a scene seems reprehensible (which, after Showgirls is no doubt Eszterhas’s middle name). The appalling event punches a hole in the proceedings, much bigger than simple credibility. The movie acts as if such crimes might be happening on a regular basis, in which case there would be a lot of missing person cases cropping up in the cornbelt. It’s also makes us sick to think that Betrayed might encourage copycat racist lynching games. After Gary Simmons is revealed to be capable of this abomination, the movie continues for an hour watching Cathy wrestle with her conscience: “Gee, my hunky fiancé really is a rabid racist who commits atrocious murders. But (sigh) I guess I’m still attracted to him.” Indeed, we’re still supposed to feel concerned about Gary Simmons. He cries over the death of a beloved horse, even as he dismisses the slaughter of blacks because they are just ‘mud people,’ and teaches his kids that Rabbis are disgusting fiends that, ‘do it with children.’ But hey, he’s a patriot: he hates those damn Iowa Nazis!  I guess it takes all kinds.

We in the audience have already checked out of Cathy’s dramatic dilemma. We’d be happy to see angels with flaming swords descend on Gary and his friends and wipe out their whole goddamn town. If some innocents get fried, that’s the breaks. Gary’s cute kids seem impossibly tainted as well. How did the Germans ever re-educate the Hitler Youth? Or did they bother? 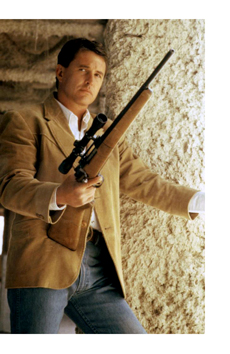 The action is exciting and the suspense not as klunky as it ought to be, thanks to the excellent performances of Debra Winger, Tom Berenger and the whole cast. If the show fails for the wide audience, it’s because of an unsatisfying ending that skips over scenes we want to see, and need to see. We only hear that the radicals are being rounded up and their stores of arms seized. Cathy acts as if she’s a victim of the government too, and is most concerned about being used by the FBI. The shooting of one of the supremacists is presented as an out-and-out execution murder, just to make the FBI seem themselves to be ruthless zealots. Is it Costa-Gavras’ intention to blame the U.S. Government, just as the armed radicals do? The show wraps things up on a personal, sentimental note, which cannot help but trivialize the bigger political dilemma. The audience I saw the picture with was ready to run to the lobby and buy War Bonds to fight the anti-white supremacist militia.

Question: Farmer Gary Simmons is not liked by his neighbors, that won’t talk to him. Why? Is it maybe because his first wife was local, and they resent him? Is it because there are still sane, patriotic farmers in his community that know about the activities of his rotten armed terrorist group? In either case, why the hell hasn’t anybody informed on him yet?

Second question: Gary has a computer that links him (internet links? in 1988?) to a countrywide system of white supremacist traitors. I guess it was a bit early, but one would think that the FBI would learn all it needs to know if Cathy simply copied Gary’s hard drive. The image of life on the vast prairie looks so idyllic that one feels like faulting the foreign filmmakers for grasping at easy images of American farm life — white cake, picnics, beer — and misrepresenting a whole class of people. I worked for several years with a devoutly Christian video technician, who could not wait to get his wife and child away from the Sodom of Los Angeles and back to his home country of Oklahoma. He was a completely ethical, peace-loving and rational guy that I’d trust implicitly, even though I know he disliked my personal politics.

Betrayed behaves as if it is revealing an All-American source of Evil that is responsible, by extension, for the political crimes and tragedies perpetrated on the countries in Costa-Gavras’ earlier classic political movies. I don’t believe that’s true – the same ugly political forces causing trouble here in our ‘exceptional’ country are present everywhere in the world.

Olive Films’ Blu-ray of Betrayed is a very handsome encoding of this beautiful (too beautiful) political thriller. French cameraman Patrick Bossier pulls off some gorgeous images even when the subject matter would seemingly demand more grit and less glamour. A fourth of July picnic looks particularly stunning.

The only extra is a trailer, that positions Betrayed as a murder thriller in the countryside, sort of Witness crossed with Mississippi Burning. For an insane movie about a (fantasy) insurrection by left-wing militants, see the gritty, obscure AFI feature film Ice. Its image of an America tightening security because of terror attacks within and without is frighteningly similar to today’s trends, too.