Pity the poor exhibitors in 1953 that splurged on 3-D equipment, only to see the payroll soar and the profits fall. Nope, Anamorphic Widescreen was the innovation that swept the world. It proved perfect for stories with scenic grandeur, such as Fox’s very early mini-epic shot on Florida locations. Thanks to Bernard Herrmann’s impressive music score, this one’s not going away. 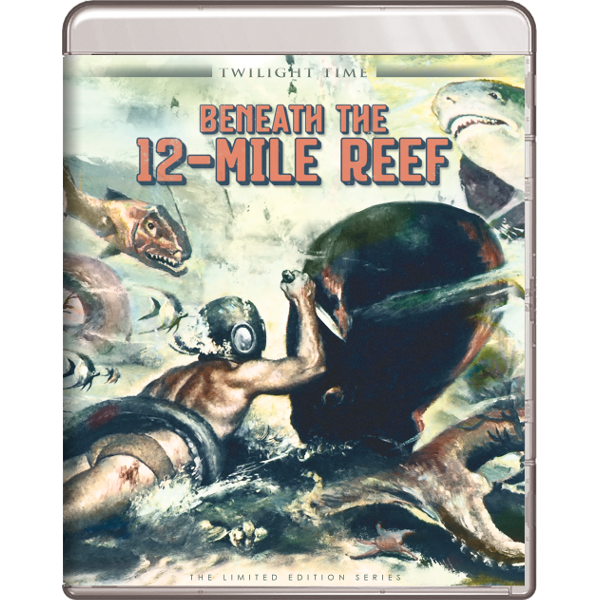 Four years have passed since the now dormant 20th Century Fox Cinema Archives DVD-R label stealth-released a surprise DVD of this very early CinemaScope attraction. The big fan draw then and now is the exciting music score by Bernard Herrmann. What a perfect release this iw for Twilight Time, which dotes on its music tracks, often including an isolated music score as an extra. For the Herrmann adepts this is a gotta-have Blu-ray event.

The third (some sources say the second) movie filmed in Darryl Zanuck’s bet-the-farm ‘miracle’ format CinemaScope is Beneath the 12-Mile Reef, 20th- Fox’s Christmas release for 1953. The colorful outdoors adventure was nominated for Best Cinematography, probably because the Academy was impressed by the glorious vistas of Florida sunsets and underwater life in ‘Scope and Technicolor. The film hasn’t seen much appreciation over the years, due to a lack of decent copies. All that circulated were poor pan-scans of what was originally an ultra-wide 2.55:1 screen ratio.

Zanuck committed everything to CinemaScope. The smartly organized promotion almost immediately made the anamorphic lens system available to other studios as well. Early C-‘Scope productions showed off big stars but also impressed audiences with wide screen spectacle and stereophonic sound. Beneath the 12-Mile Reef took the new process on location, with a cast of character actors led by the up ‘n’ coming star Robert Wagner in his first leading role.

Former author A.I. Bezzerides wasn’t a prolific screenwriter, but he made a big mark on Hollywood by giving all of his screen work a socially critical edge. Beneath the 12-Mile Reef comes off as a cross between Romeo and Juliet and Bezzerides’ own Thieves’ Highway, a scathing indictment of cutthroat business practices among Greeks, Poles and Italians in the produce trade. On the West Coast of Florida, the partially assimilated Greek immigrant Mike Petrakis (Gilbert Roland) makes a living diving for sponges. Mike’s wife and his daughter Penny (Angela Clarke & Gloria Gordon) wait for Mike’s boat Aegli to come in. Mike is not getting the good catches these days because the best sponge beds are illegally held as exclusive territory by a casual conspiracy of ‘Conches’, the Anglo fishermen led by Thomas Rhys (Richard Boone). Mike, his first mate ‘Soak’ Houlis (J. Carrol Naish) and his son Tony (Robert Wagner) sneak into the reserved shallows off Key West. After the Petrakis boat has filled up with sponges, the piratical Conches Arnold Dix and Griff Rhys (Peter Graves & Harry Carey Jr.) steal the entire catch by threatening to cut Mike’s oxygen line with an axe. Back in town, Mike can do little against Thomas Rhys’ gang. But the handsome young Tony captures the eye of Rhys’ mischievous daughter Gwyneth (Terry Moore), much to the consternation of the jealous Arnold, Gwyneth’s steady. Desperate for a marketable catch, Mike takes his crew to the notorious 12-Mile Reef, a deep dive with treacherous currents. Tony wants badly to start diving himself, while the hate-filled Arnold Dix is looking for any reason to retaliate against Tony and the Petrakis clan.

Handsomely filmed, Beneath the 12-Mile Reef is given fairly active direction by Robert D. Webb, a former assistant- and second unit director who made a number of ‘Scope movies for Fox, including the well known Elvis debut vehicle Love Me Tender. Although none of the actors appear to be authentic Greeks, the Petrakis family generates a lot of enthusiasm: Mexican Gilbert Roland’s paterfamilias is every bit as lusty as the Greeks played by fellow Mexican Anthony Quinn. Irishman J. Carrol Naish yet again proves himself capable of impersonating any ethnic extraction to perfection. After paying his dues in two years’ worth of featured bits and supporting parts, the lean and muscular All-American screen idol Robert Wagner turns on the charm under a big crop of extra-curly Greek hair. Wagner’s broad smile does most of the work, but he and Terry Moore work up one or two reasonably frisky courting scenes.

Sponge fishing in itself isn’t all that exciting to see,
as the little critters apparently don’t put up much of a fight.To compensate Beneath the 12-Mile Reef throws in plenty of breathtaking scenery, exotic underwater photography and a few ethnic ceremonies. In one ritual a Greek Orthodox priest tosses a heavy cross into the water, and all the Greek boys rush to retrieve it. When Tony wins he receives a personal public blessing. As the Anglo ‘Conch’ thugs have sewn up the good fishing areas, the Greeks must fight for their place in the ‘free market economy.’ Thomas Rhys doesn’t mind seeing the Greeks ripped off once in a while, but the jealous Arnold pushes things over the top, beating up Tony and setting fire to the Petrakis’ boat while stealing a second load of sponges. In the end Tony is the Petrakis male that must make peace with the Conches, and risk his life in the depths of the dangerous reef.

It’s fun to see character actors Richard Boone and Peter Graves playing heavies as they attempt to get their careers rolling. Graves is the main creep, while Boone’s Anglo authority figure is just trying to keep those pesky Greeks in line. Writer Bezzerides’ story isn’t an acid-penned indictment like his Thieves’ Highway but it is frank about ethnic bigotry in economic crunch times. Were it made in a less politically repressed year, the script might have been more overtly political. That aspect of the show invites direct comparison to Louis Malle’s bitter movie about similar economic thug-bigotry, Alamo Bay. Beneath the 12-Mile Reef doesn’t carry any major story surprises — boy avoids giant octopus, boy fights off villain, boy gets girl — but its narrative framework is solid. It is amusing that when Tony decides he’s man enough to don the diving suit, his first ‘adult and mature’ act is to smoke a cigarette like his Pop.

The Twilight Time Blu-ray of Beneath the 12-Mile Reef is a dazzler. Sometime around 2010 the title went from a pan-scan eyesore to the brilliant and colorful encoding on this disc. Early CinemaScope pictures tend to stand back from the action because of a shallow depth of field and the distortion of wide-angle lenses. The default no-risk scene blocking strategy is to just place the actors in a line across the screen. The added resolution of HD gives us a better look at faces. Peter Graves now appears to be actually performing, while perky Terry Moore and Gloria Gordon no longer seem pushed to the margins. This is perhaps Ms. Moore’s best ‘adult’ role — she seems the kind of wild child that would grow up in this fisherman’s wharf culture.

The earlier DVD was extras-free, but TT has jumped in with their Isolated Music track and a featurette about the career of Robert Wagner, the original ’50s right-guy-in-the-right place Hollywood star. He got a better launch and a better deal than anyone, including Fox’s other hopeful Jeffrey Hunter.

With apologies to Mr. Wagner (who was pretty cute on selected episodes of TV’s NCIS), the big appeal of Beneath the 12-Mile Reef nowadays is for movie soundtrack fans. Bernard Herrmann’s impressive music score is almost wall-to-wall in this movie and amounts to a 105-minute concert with dialogue and effects just getting in the way. Herrmann fleshes out almost every scene with his dynamic, unusual themes, even offering his take on ethnic Greek tunes. He did not compose one featured song called “Yiati Yiati.” Its music and lyrics are by James Harakas and Andrew Ladas.

The first CinemaScope features carried 4-track stereophonic sound, which tended to be LOUD and dramatic. Impressive Bernard Herrmann music scores also adorn the fourth CinemaScope film King of the Khyber Rifles as well as the next year’s Garden of Evil and parts of The Egyptian. The last two titles are also Twilight Time offerings, with equally superb Isolated Music tracks.

In her liner notes, Julie Kirgo’s DNA check on Beneath also comes up with Romeo and Julie but with a trace of a Beach Party movie. She goes into the details of the new CinemaScope roll-out and finds a wholly appropriate descriptor for the Bernard Herrmann music score: “other-worldly.”