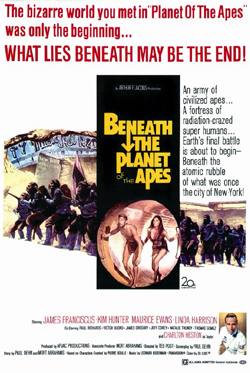 Beneath the Planet of the Apes

This surprisingly downbeat first of four sequels remains the most profitable of the Apes series, primarily due to its comparatively low budget. None-too-subtle anti-Vietnam war undertones waft through writer Paul Dehn’s‚ subterranean ‚ rehash of the original, enhanced with the addition of nuclear warhead-worshipping‚ mutant heavies.