We’re still waiting for the role that will prove that Jon Hamm has a future after Mad Men. This middling hostage negotiation drama doesn’t insult our intelligence yet is still not that much more impressive than an average ‘let’s go to a war zone!’ episode of NCIS. Rosamund Pike plays an intrepid diplomat/agent who chooses to go rogue with Hamm’s character because (surprise) the system is so corrupt. 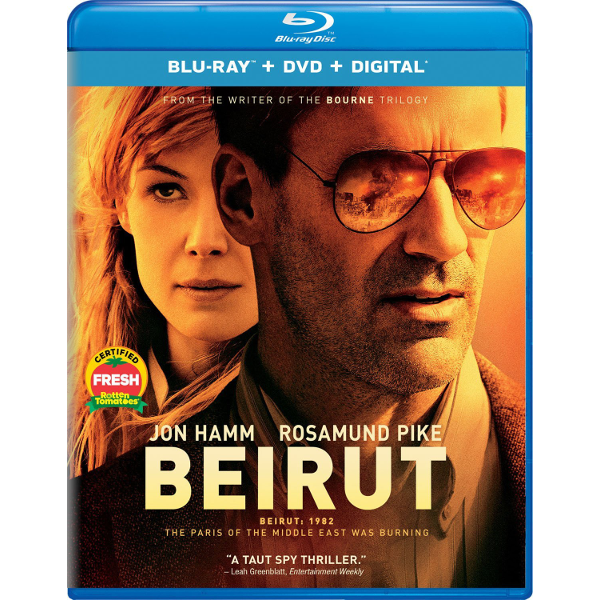 Back in 1981 United Artists briefly distributed an amazing French- produced movie by Volker Schlöndorff called Circle of Deceit. For my money it got the story of warfare in Lebanon exactly right, before most Americans had thought much about how upsets in the Middle East might affect the world at large. The ugly conflict is fed by media attention: Bruno Ganz’s reporter finds that massacres are being staged so photographers can supply horrific images for readers of German and French magazines to deplore. Even though the show is about Germans caught up in the Lebanese civil war, the focus is on the right thing, a political catastrophe. It’s a fine picture that ought to be better known.

This last week was released a sequel to the first Sicario movie, continuing the impressive tale of total lawless anarchy on the Texas border. It will of course depend on action movie grit to bring in audiences, but I have to say that its claim that nobody is in charge of anything in the War on Drugs is quite credible: ‘Beirut’ is beginning to happen all around us, even if our biggest threat is homegrown radicalism. The amusing thing about the Sicario movies is that their ‘personal revenge’ connection isn’t an embarrassment. Benicio Del Toro’s implacable hit man places himself beyond emotion in his quest for blood retribution. That appears to be the highest ideal in American film fiction these days. Happily, in the next multiplex movie-box, the MisterRogers docu might be playing too. But most movies about unpleasant things that happen to ‘other people overseas’ are more like Bleeker Street’s Beirut, from the capable filmmakers Brad Anderson and Tony Gilroy. A handsome white guy must deal with trouble in a foreign hot spot AND a traumatic past event. But he’ll return to save a friend and perhaps find a kernel of good amid the tragedy. At his side is a attractive woman, whose purpose is to enable noble white heroes to overcome their doubts.

The best thing about Beirut (working title High Wire Act; UK title The Negotiator) is that our hero is not a killer with a gun. In a prologue from 1972, American diplomat Mason Skiles (Jon Hamm) is doing his best to keep the peace in Lebanon when various security agents including Israelis insist that he surrender his adopted son Karim, because Karim’s older brother is one of the Palestinians behind the Olympics Massacre (as chronicled in Spielberg’s Munich.) But the brother Rami (Ben Affan) attacks, kidnaps Karim and kills Mason’s wife Nadia (Leïla Bekhti).

Ten years later Mason is a conflict negotiator in labor disputes, and an alcoholic. He’s cajoled/tricked into returning to Lebanon to make an address at the University, but a cabal of intelligence spooks really needs him because his old buddy Cal (Mark Pellegrino) has been kidnapped. The kidnappers have demanded that Mason do the negotiating. It is 1982 and Beirut is now a ruined shell riddled with militias, snipers and random killings. Mason connects with Cal’s wife Alice (Kate Fleetwood) but finds the only person he can trust is Sandy Crowder (Rosamund Pike), a mid-level intelligence functionary. He soon begins to believe that there’s something fishy happening among the ‘good guys,’ whose priorities are mostly political. The Israelis appear to be looking for excuses to invade Lebanon.

Of course, the center of the story is Mason Skiles’ relationship to the kidnapper, who he knows personally. A rather well-organized string of setbacks, detours and perceived treacheries eventually lead Mason and the attractive Sandy to go extra-legal and act independently. Sandy even steals millions of dollars from the Embassy vault, after their cynical superiors find it expedient to write Cal off the books. And we get several scenes in which Jon Hamm’s Mason gets to shine, using well-honed negotiating tools to manipulate the kidnappers — stalling, bluffing, and fronting extreme shows of sincerity.

Beirut goes so far as to include Israel among the ruthless factions that routinely commit evil acts in the name of national security. To the film’s credit, this attitude is more than a simplistic ‘a pox on all their houses’ cynicism. But the format still makes us think of the average TV crisis drama show, where Arabs can be divided into evil villains, tragically decent villains, and women and children victims (or villains). The focus is of course on the Anglos on our side. With the exception of the actress playing Mason’s unfortunate spouse, the first ethnic name in the billing list comes up in position #11.

Unfortunately, the only non- Mad Men Jon Hamm appearances I can remember seeing are forgettable functionary roles in the awful Keanu Barata Nikto and Ben Affleck’s The Town. Beirut gives him bushy sideburns for the 1972 flashback, and then outfits him with sallow cheeks and a hangover stubble to wear through the rest of the movie. The talented Hamm does nothing wrong. It’s just that the script’s device of having him regret/resolve the killing of his wife is just too much of a cliché. Liam Neeson has made this same plot device his life’s work. It seemed overdone sixty years ago, when both Kirk Douglas and Gregory Peck came out with westerns about white guys avenging the killings of their ethnic wives: Last Train from Gun Hill and The Bravados. Has avenging a heinous wrong done a family member become the only thing that will motivate a story? At Cannon we called the phenomenon TTIP: This Time It’s Personal.

And how many times has a multi-faction spy showdown ended up with the most ruthless, cagey players being Israel’s Mossad? Way back in the Harry Palmer tale Funeral in Berlin Israel ruled the roost for moral righteousness. Beirut’s relatively happy finale (key baddies dead or demoted, key goodies alive and promoted) still boils down to a comfortable fantasy.

The impressive production makes us wonder if the civic authorities in Morocco have preserved big sections of ruins as a permanent, ‘shoot Middle East movies here’ filming site. The direction is quite polished and the production more than adequate. Explosions and gun battles are not hyped, and we do get the sense that anybody can be killed at any time. Jon Hamm’s version of Martin Sheen’s “Saigon – sh**!” moment from Apocalypse Now comes when he wakes up in a Beirut hotel room and we see that an artillery hit has knocked out a couple of rooms right next to his own. Beirut can’t touch Circle of Deceit for the feeling of being in a war zone in 1980 — even reporters dared not to leave their hotels.

Universal Pictures Home Entertainment/Bleeker Street’s Blu-ray + DVD + Digital of Beirut is an attractive, polished encoding of a picture shot on film and finished on video. Tech specs are right up there. The cinematography does have a tendency to make everything seem ‘pretty,’ which is surely a necessity for commercial films at this level. The music track incorporates flavorful Middle Eastern themes, but we hear too much music overall. The constant use of music covers the drama like carpeting, pulling us out of the carefully assembled illusion of reality.

The extras are two promotional featurettes that position Beirut as a thoughtful and serious picture, which it mostly is.