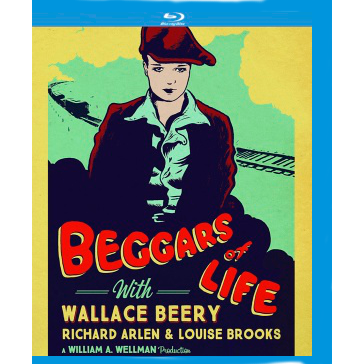 Director William Wellman didn’t gripe and groan about the sameness of Hollywood product; when he wanted to make something completely different, he just went out and did it. After the big success of Wings Wellman could write his own ticket. He chose to take his cameras out on the rails for a story about life among the hobos. His Wings star Richard Arlen came along, with Wallace Beery as a boisterously lovable bad guy and the legendary personality Louise Brooks as a female hobo passing for male.

Filmed on rail lines in the Mohave Desert and in mountains just to the East of San Diego, Beggars of Life is a fine mix of light romantic adventure with a strong streak of naturalistic realism. More than a few moments remind us of von Stroheim’s Greed, but with a sense of humor. Young hobo Jim (Richard Arlen) comes to a farmhouse door in search of a meal and discovers that the young Nancy (Louise Brooks) has just killed her stepfather with a rifle. They take to the rails together, with Nancy disguised as a boy. Way out in the middle of nowhere they land in a hobo jungle, and Nancy’s charade is uncovered. The Arkansas Snake (Robert Perry) claims Nancy in the ‘share all’ rule of the jungle, but the alpha male Oklahoma Red (Wallace Beery) wants her for his own. The only sympathetic hobo is the thoughtful Black Mose (Edgar Washington Blue). A big brawl puts off what seems to be an inevitable fate for Nancy, long enough for the railroad deputies to catch up with our heroine — she’s already wanted for murder, with a stiff reward. 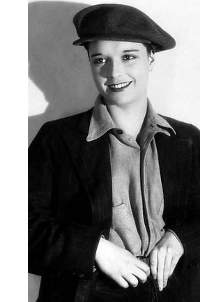 Wellman must have read the ‘on the thumb’ novels and stories of Jack London, for Beggars of Life takes an unusually realistic tack regarding the hobo life. Jim approaches the farmhouse meekly, offering to work for a meal. When they take off running, he first gathers up all the food he can see. They sleep in a haystack. Jim teaches Nancy how to hop a freight before it gets going too quickly. It’s not at all easy riding the rails, for at any moment a railroad bull armed with a club can force them to jump, from a train going thirty or forty miles an hour.

The unfussy photography sets a standard for train films, tracking with the freight cars as they board and riding high up top for scenic views. Yet cameraman Harry Gerrard indulges silent-movie graces. Soft mattes isolate objects in the frame, and occasional soft-focus vignettes make farm scenes look like valentine cards. A battle between hobos and cops on a train ascending a steep grade is filmed with precision and detail, as Oklahoma Red uncouples cars so they begin to slide back down the hill. Excepting the comic brawl in the hobo jungle, most of what we see seems fresh and original. It’s an ancient silent picture, that in many ways seems quite modern.

Richard Arlen’s talents didn’t to translate to sound pictures all that well, as his vocal acting was on a par with Buster Crabbe. He comes across great in the silent pantomime needed here. Wallace Beery plays one of his goons with a heart of gold, the kind of guy that changes his mind about raping the heroine and instead gives his life to save her. The context is so rough-and-ready that the melodramatic element doesn’t offend. Beery is in far better shape than in his ’30s pictures at MGM; it really is him climbing around on those moving trains.

[Aside — my grandfather was a railroad man, and the stories told by my father have given me a healthy respect for them . . . which is why any show filmed in and around real moving trains impresses me. This picture’s railroad thrills may not be as suicidally daring as Buster Keaton’s The General but they’re still nothing to sniff at — it’s just too easy to slip up and get killed when ‘playing’ with real trains.]

I think I’ve seen most of Louise Brooks’ major surviving pictures now. The Criterion Pandora’s Box is OOP and going for stiff prices, but Kino Classics’ Diary of a Lost Girl is now available in a beautiful restoration. Perhaps her French talkie Prix de beauté will be restored soon as well. I’ve seen parts of silent comedies with Brooks, and even in those she seems more ‘real,’ and less affected than other Hollywood beauties of her day. Brooks projects a presence, an intelligence as an individual, that makes her seem the character she’s playing more than the performers around her. She’s very much in this mode in Beggars of Life. For her introduction Nancy descends some steps and is surprised to see Jim over the body of her stepfather. There is no overstated reaction, no big facial expression, just sort of a doe in the headlights situation. When she matter-of-factly explains what happened, we see artful superimpositions of her stepfather’s rape attempt. An inter-title explains that the father ‘bought her out of an orphanage.’

Even when dressed as a male, with a cap pulled down low on her forehead, Brooks doesn’t play for cute effects. Wellman doesn’t pull back on the sordid realities of the hobo jungle, where for at least two full reels Nancy is threatened with a gang rape. Arkansaw Snake’s hands make grasping motions just as her stepfather’s did in the flashback. While the hobos restrain Jim, Arkansas and Oklahoma fight for possession of Nancy. We can presume that the rest of the eager hobos will form a pecking order to see in what order Nancy is taken. Even with some of the funny bits in the fighting (one of the bums is the familiar Roscoe Karns), the basic Adult situation is not covered up in the least! Nancy is also not given extraordinary powers — although she helps Jim get the upper hand at one point, her vulnerability is not questioned. Yet she never breaks up or cries. Life has been so harsh for this orphan that the malice of men is a familiar experience. The show has a rich pre-Code feel.

Louise Brooks gave Beggars of Life a big part in her legend-building autobiography, where she openly describes herself as an adventuress who liked the company of men and openly pursued many affairs. She describes the weeks camping on location in the backwoods of Southern California as a sexual idyll to top the often- exaggerated stories of Hollywood orgies. A genuine independent, Brooks was a serious Kansas dancer, a Broadway showgirl deluxe, and a blaze across Hollywood before answering the call to Germany, G.W. Pabst and cinema fame. Depending on how you judge it, she was either a brat that Hollywood wouldn’t tolerate, or a victim of a male-dominated studio system. For all the excess, I haven’t heard that she ever acted out of malice or sullied herself with a public scandal. Like Mary Astor, Brooks was a class-act independent woman.

William Wellman set more films in the railroad world (Other Men’s Women is a winner) and revisited some of the Beggars experience into his remarkable Depression-Era ‘revolt’ movie Wild Boys of the Road. Teenaged boys leave home because their parents can’t feed them; while riding the rails our heroes meet a girl passing for male, just like Beggars’ Nancy. She’s the be-freckled Dorothy Coonan, who comes off as convincingly tomboyish. That’s funny because Coonan was also a chorus star in the Busby Berkeley musicals, one of the dazzlingly glamorous showgirls singled out for key close-ups.

Beggars of Life has a poetic scene in which Nancy invokes the title to explain her theory about how everybody is cast adrift in this world, in one way or another. The show is a forerunner of other hobo pictures, on and off trains, that come back every so often: Scarecrow, Emperor of the North. More importantly, Preston Sturges seems to have had it in mind when he made his marvelous social comedy Sullivan’s Travels. Sturges has a much more complicated thesis in mind, but he still uses the notion of a glamorous woman who dresses to pass as a boy, complete with driving cap pulled down over her forehead. Sullivan’s Travels gets to have its cake and eat it too – it seriously takes in the plight of the down-and-out homeless, while ribbing the whole notion of hobo ‘glamour’ — flea bites are not half as much fun as they are in cartoons. 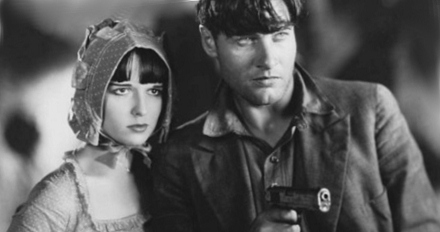 The Kino Classics Blu-ray of Beggars of Life is a very good scan of elements held by the George Eastman Museum (where Ms. Louise lived for a great part of her retirement). The film is worn up front but entirely intact; I noticed no missing frames. Sharpness and stability are excellent, with the proviso that some scenes are purposely soft-focus filtered for a dreamy, hazy look. The Mont Alto Motion Picture Orchestra performs a fine score sourced partly from an original Paramount Pictures music cue sheet calling up various song selections for individual scenes. This is a great way to see this movie.

Two academic commentaries are in place. William Wellman Jr.’s track is of course centered on his father’s career, while Thomas Gladysz of the Louise Brooks Society, takes his commentary into star-worship mode. Gladysz also contributed a track for Kino’s Diary of a Lost Girl, and is no slouch with the facts. It’s a very good listen.

Nick Pinkerton is the author of the essay in Kino’s ten-page insert booklet. Kino (and their producers Robert Sweeney and Bret Wood have given us an exemplary disc of a great silent movie.