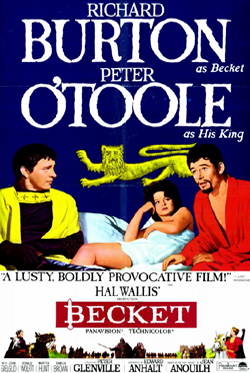 Out of circulation for decades, Peter Glenville’s acclaimed film of Jean Anouilh’s 1959 play was recently restored by The Academy of Motion Picture Arts and Sciences and Martin Scorsese’s Film Foundation. Friendly rivals Richard Burton and Peter O’Toole once again don regal robes as Archbishop Thomas Becket and King Henry II, whose emotional relationship sours over matters of faith. Edward Anhalt’s eloquent, endlessly quotable screenplay won the only one of the 12 Oscars this film was nominated for. Five years later O’Toole played an older Henry II in The Lion in Winter.