It’s a classic from the Golden Year of 1939, directed in fine style by Wild Bill Wellman and well cast with Paramount stars Gary Cooper, Ray Milland, and Robert Preston, and with Brian Donlevy as one of the movies’ most hissable villains. The popular story has been remade and spoofed innumerable times, yet this remains the indelible best version. A commentary with William Wellman Jr. and Frank Thompson points out many things we didn’t notice before, including where some excised scenes belong, and what originally happened in them. 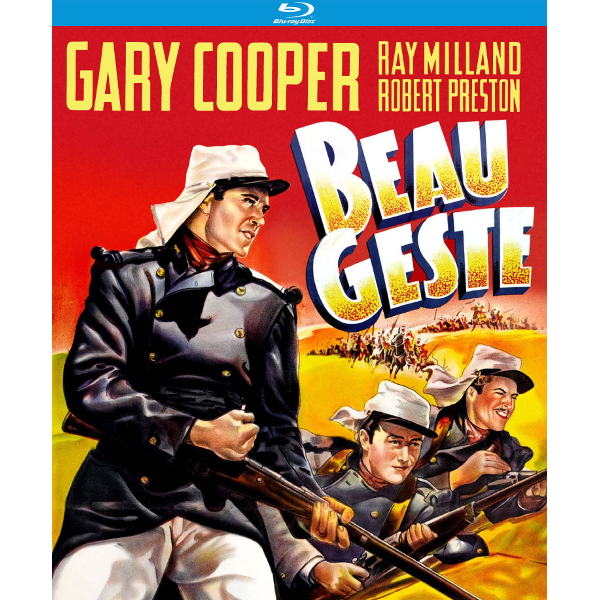 The French Foreign Legion has always been the stuff of romantic legend, with the notion (myth?) that any willing man could enlist, no questions asked. Dramatists populated dime novels with ‘lost’ men fleeing criminal charges, public scandals, or failed romances. In other words, a touching back story or a death wish could be found in every pack and bedroll. Josef Von Sternberg’s great Morocco gets its power because its world-weary chanteuse Marlene Dietrich falls in love with a Legionnaire with ‘no past, no regrets.’

The Legion has been been the focus of a number of great pictures, and more than a few losers. Dramatizing disgraced men finding self-worth fighting in Algeria gives plenty of opportunities for moral lessons about virtue, patriotism and loyalty. On the opposite end of the scale is Julien Duvivier’s La Bandera, a weirdly pessimistic, downbeat drama with Jean Gabin, set in the Spanish Foreign Legion. With no way to return to society, the legionnaires already consider themselves dead men. They fight gory losing battles, and carry on doomed romances with prostitutes. The death imagery is unforgettable — one legionnaire wears a full-face tattoo that makes him look like a skull. 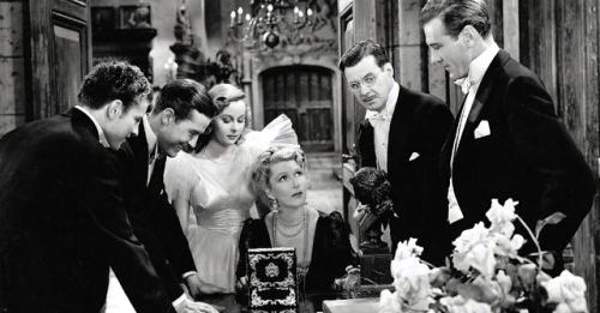 On the other hand, the highly romantic Beau Geste makes light entertainment of what might have been a horror story about a doomed battalion. Like the English epic The Four Feathers it’s a story of boys that go away to fight, but there’s no colonial flag-waving involved, or even a patriotic theme — the international regiment’s oath is to the Legion, not the French flag. The subject of Beau Geste is personal honor. It’s idealized, exaggerated old-school stuff — and very attractive.

Every ’50s kids knew about this film — it’s the one with the dead guys propped up on the fortress wall. We all admired the impossible gallantry of Beau Geste, a hero who takes noble self-sacrifice to higher level. One of the heralded ‘Golden Movies’ from 1939, it carries a terrific pedigree of star talent even in its bit roles. The only ’39 adventure film that could lay claim to being more popular is likely George Stevens’ brilliant Gunga Din, which is now dulled by outdated racial attitudes. However, Beau Geste avoids offending non-white cultures mainly by not depicting them. The Legion’s Touareg enemies are seen only in battle. 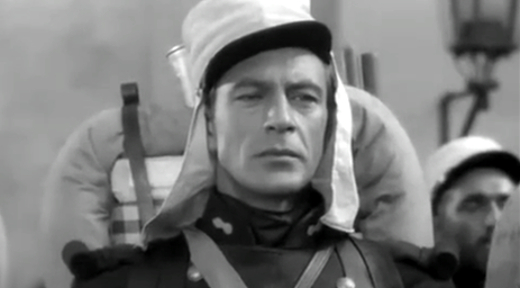 Here’s a synopsis that has no spoilers. A prologue showing the discovery of a ‘ghost fort’ in the desert, manned by dead troops, precedes a flashback wherein we meet the three Geste brothers, all adopted kin of their beloved Lady Patricia (Heather Thatcher). The boys have already developed a keen sense of loyalty, honor, and risky behavior. Their nemesis is Lady Patricia’s genuine heir Augustus. He’s well-played by David Holt, repeating his obnoxious ‘whiny Sid’ act from the previous year’s The Adventures of Tom Sawyer. A favorite trivia question is the actor who plays Beau Geste as a child — future Singin’ in the Rain star Donald O’Connor. A leap forward gives us a couple of scenes with the grown Gestes, who are now Beau (Gary Gooper), Digby (Robert Preston), and John (Ray Milland). Preston and Milland were established actors but still well before they became top Hollywood stars. With breaks for TV and stage work, it could be argued that Robert Preston didn’t become a full A- lister until The Music Man.

The romantic lead in the movie, Isobel, is played by a young Susan Hayward in just a couple of scenes. She hasn’t much to do but look pretty, yet Beau Geste had to be a significant step up for her — it’s only her second credited role.

Anyway, the three Geste boys individually enlist in the French Foreign Legion, all taking the blame for a crime that will go unmentioned. Their loyalty to the flag is tested under the iron fist of the sadistic Sergeant Markoff (Brian Donlevy), a sicko who grins when his C.O. dies. It’s a key role for Donlevy, the heaviest of his ’30s heavies. but Markoff is such a showcase that Donlevy was able to move on to occasional leading parts, even heroic leading roles when the war came along and tough guys were needed. His real break was probably Preston Sturges’ The Great McGinty, a comedy. With his thick neck and surly promises to murder men he doesn’t like, Donlevy’s swinish Markoff became an archetype for The Evil Boss. The sergeant’s one redeeming quality is his ability to command during battle, which even Beau acknowledges.

The Legion barracks is packed with great personalities, several of whom are on camera long enough to sketch great characters. The wonderful J. Carrol Naish is Rasinoff, a thieving weasel with a squeaky voice; Naish was praised as an acting chameleon in dozens of different ethnic roles. The way Naish lumbers around the fort, you’d think he was rehearsing to play his hunchback in Universal’s later House of Frankenstein. 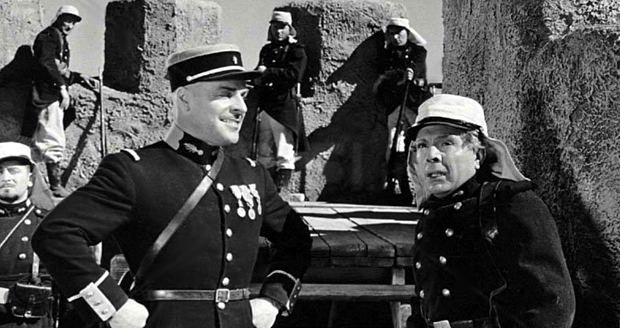 The major cliché that we overlook is when the mutiny story is suddenly pre-empted by an attack by Arab Touaregs, who might as well be Wild Injuns — they mostly offer themselves as targets while picking off the fort’s defenders one by one. Markoff has a morbid solution to keeping the fort’s embrasures (new word for me) manned. The final attack is prefaced with a classic ‘laughing in the face of death’ scene, that works pretty well thanks to J. Carroll Naish’s creepy laugh — audiences likely laughed along as well. The attacks finally pay off in a clever series of events that explain everything — the mysterious opening, the full bond between the brothers, and the reason that they decided to flee to the Legion. A childhood oath of honor is fulfilled as well. The final lesson is of course that no young men ever behaved with more valor, and that those that die will become ultra-classy legends: ‘Gee, was he COOL, or what?’ Nothing in real life ever wraps up as satisfyingly as does this story. 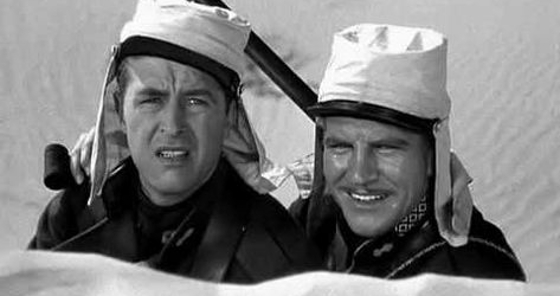 Cooper, Preston and Milland are charming in winning roles even if this isn’t the kind of movie to tax their talents. Aided by much 2nd-unit work by Richard Talmadge, William Wellman’s assured direction gives a high polish to what is already an unbreakable script. The film is only 112 minutes in duration, but the pacing and scale gives the impression of a BIG movie. It feels like a epic.

There’s a major California sand dune area near Palm Springs that was often used for filming, and a second bigger one near the Arizona border down by Yuma. If this was filmed at the second location, the same giant dunes were used 43 years later for the opening of Return of the Jedi. 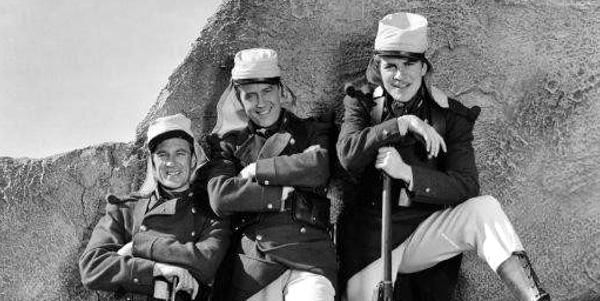 The KL Studio Classics Blu-ray of Beau Geste is a nifty new 4K encoding. The picture is rich, with a perfect contrast range and nice grain texture; I only noticed one brief scratch and a jump cut in a battle scene that possibly always was there. Alfred Newman’s music isn’t all that distinctive, but it comes across very well.

Kino has put together a solid and rewarding new commentary with William Wellman Jr. and Frank Thompson, the co-author of that monster Wellman book that came out a couple of years ago. He knows his stuff, right down to having visited the shooting site and carrying away souvenirs of the demolished fort set. Wellman Jr. provides many personal notes, and Thompson knocks us down with filming details. 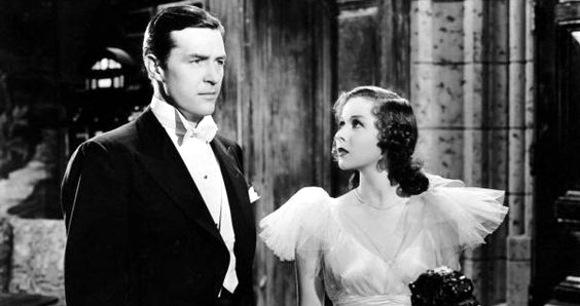 We’re told that the cruelty in the Legionnaire fort was toned way down from the silent version due to objections from the French Consolate — the Legionnaire mob originally crucified Rasinoff to a mess table, with bayonets. Author Thompson suggests that a character name or two were changed to sound more Russian than French. They say no horses were hurt and that the animal cruelty people approved of the shoot, but that seems a stretch considering the tumbles we see. I have prejudiced visions of ASPCA people enjoying Happy Hour in a Yuma bar.

Thompson has a lot to say about long shots of the fort, especially when it is on fire. I believe that he is correct that some angles use either a miniature fort or a painted fort, matted over full-scale fire filmed either on location or in some other clear area.

We also hear about a too-morbid scene that was cut, that explains what happens to two corpses left in the fort’s tower. Thompson also points out an optical trick used to editorially skip an entire battle scene (yes, I noticed the freeze frame on my first viewing). The missing battle showed the Arabs scaling the walls and throwing fire bombs. We’re told that the movie was six minutes longer when originally released, and believes the scene was cut for a 1950 re-issue and lost. Paramount might have kept the original uncut version in their vault — but when MCA bought the library in the 1950s, only Paramount printing elements were transferred — alternate versions and ‘extra’ stuff for hundreds of films may not have been retained. Everything else was junked.

The other extra is a trailer for Beau Geste and a tall stack of trailers for Kino discs of pictures by Cooper, Preston and Milland.