Powell & Pressburger’s big-scale historical epic is perhaps the best film ever about an old-school naval encounter between battleships. The first half depicts the showdown between England and Germany in the South Atlantic, and the second half a tense diplomatic game in the neutral country of Uruguay. Peter Finch, Bernard Lee and Anthony Quayle shine as sea captains. 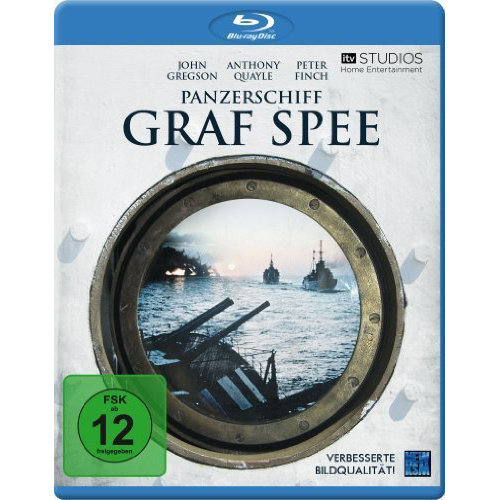 The best way so far to see the impressive The Battle of the River Plate is this German Blu-ray given the title Panzerschiff Graf Spee. In the 1950s the English film industry did its best to laud the embattled island’s valiant war experience, with pictures about air raids, prison escapes and special missions. One of the biggest of these ‘how I won the war’ epics is also one of the last films by The Archers, the writing-producing-directing team of Michael Powell and Emeric Pressberger. 1956’s The Battle of the River Plate stars a high-ranking assortment of acting talent: Peter Finch, Anthony Quayle, John Gregson and Bernard Lee. Filmed in the large-format VistaVision process, it can boast filmdom’s most ferocious naval battle. Shorn of a full thirteen minutes, it was released here as The Pursuit of the Graf Spee. 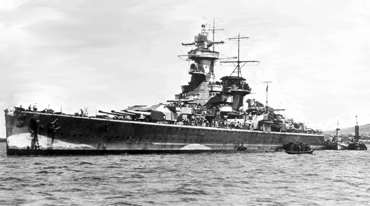 A dramatic highlight of the early war took place in the South Atlantic in December 1939. The German pocket battleship Graf Spee raided the sea-lanes to India, sinking England-bound freighters and seizing their crews. A trio of smaller Royal Navy fighting ships anticipated the Graf Spee’s position and attacked, sustaining heavy damage but forcing the battleship to flee to the neutral Uruguayan port of Montevideo. There began a diplomatic game of cat and mouse as British intelligence agents bluffed the Germans into thinking that more ships were waiting in ambush at the mouth of the broad (140 miles) estuary of the Rio de la Plata. Germany’s national prestige was at stake. Should the Graf Spee allow itself to overstay in Montevideo, and by the rules of neutrality be seized by Uruguay? Or should it make a run for the open sea? The deathwatch for the giant battleship was covered live on radio. 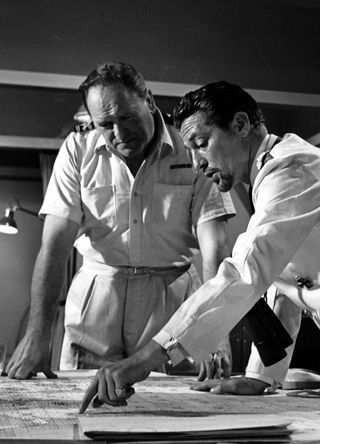 Powell & Pressberger wanted to make something other than the typical oceangoing movie in which large model boats fought one another in a special effects tank. As this was the middle 1950s they opted for VistaVision, Paramount’s new large format process that yielded remarkably bright, sharp images, especially when printed in Technicolor. The filmmakers secured the cooperation of several navies to use real ships to “play” the Royal Navy cruisers HMS Exeter, HMS Achilles and HMS Ajax. Only the Achilles plays itself, as it had been re-commissioned as a ship of the Indian Navy. The American heavy cruiser Salem impersonates the Graf Spee. As the USN would not permit the Salem’s large bow numbers to be painted over, Powell & Pressberger excuse them as part of the German camouflage effort.

Miniature effects were employed to depict parts of the sea battle, but Michael Powell puts more stress on the experience of the sailors and civilians involved in the conflict. We stay locked up with the captured merchant seamen below decks on the Graf Spee, and share the concerns of the captains and the crews of the three cruisers tasked with engaging the far larger battleship. Merchant captain Dove (Bernard Lee, “M” in the early James Bond films) forms a friendship with the German Captain Langsdorff, played with reserve and respect by Peter Finch. The British Commodore and Captains (Anthony Quayle, Ian Hunter, John Gregson, Jack Gwillim) enter into the fight in high spirits and pursue their foe even when the Exeter is almost sunk and other ships heavily damaged. A surface battle is a real melee — groups of men on opposing ships shooting each other to bits. A hit on the Exeter’s bridge wipes out most of its ranking officers.

The show is split in halves between the ambush at sea and the public relations / espionage story on land. A montage of nighttime Montevideo lights heralds the second half of the film and introduces a group of cagey diplomats (Anthony Bushell, Douglas Wilmer) and British Naval Intelligence agents (Michael Goodliffe, William Squire). American broadcaster Mike Fowler (Lionel Murton, the chaplain in Patton) sets up a live radio reporting post from a portside bar owned by the easily annoyed Manolo (Christopher Lee). Midnight oil burns at the embassies as the British and French ministers flaunt their superior relations with the Uruguayan foreign minister. Quoting Article 12 of the Hague Convention, the Brits initially press to force the Graf Spee out of the neutral port in 48 hours. They then reverse their strategy and scheme to keep her in port, to allow more time for British ships to assemble at the mouth of the river. 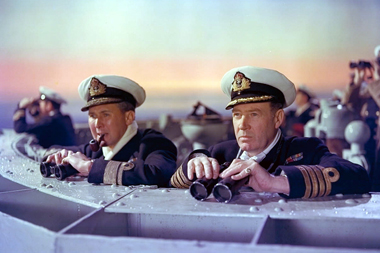 The realistic subject matter of The Battle of the River Plate calls for a different style than that pioneered by Powell and Pressberger for their history-making visual feasts Black Narcissus and The Red Shoes. They employ some of the same creative talent, including production designer Arthur Lawson, composer Brian Easdale and artistic adviser Hein Heckroth. The film favors wide masters in dialogue scenes and avoids image-degrading opticals where possible by using clean cuts instead of dissolves. For one shot Powell puts the VistaVision camera in a small craft that rolls with the sea waves. The wildly pitching image plays as a visual joke, a literal representation of seasickness.

The film has a truly epic feel, whether observing the fast ships in action or taking in the spectacle of thousands of Uruguayos crowding the Montevideo wharf to witness the fate of the Graf Spee. The Archers team reserves its expressive film tricks for a few battle details — like an ‘impossible’ view of a shell slicing its way through iron decks — and the concluding chapter, which plays out under a fiery South American sunset. Most likely filmed in normal 35mm, the model work isn’t as sharp as the VistaVision footage around it. But clever stage tricks show the British Minister observing the Graf Spee from the balcony of his embassy, adding greatly to the dramatic finale. 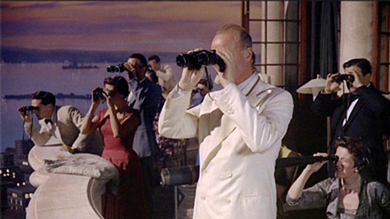 Although a stiff upper lip approach to some of the derring-do is unavoidable, Powell & Pressberger’s script emphasizes memorable human reactions. While his ship makes hasty repairs, Commodore Harwood (Anthony Quayle) shares a laugh with his peers, explaining how a German hit on his quarters has destroyed both his golf clubs and the ship’s only bathtub. Captain Langsdorff’s aide throws a Christmas party for his prisoners, and then jubilantly announces that, because Montevideo is a neutral port, they will all be set free. The British spies purposely leak bogus ship movements on phone lines known to be monitored by German counter-agents. And radio personality Mike Fowler can only secure his perfect perch on the bar’s oceanfront patio by buying hundreds of drinks he can’t possibly enjoy. Re-creating the famous live broadcast of the final naval showdown just outside Montevideo, Fowler plays up the drama for a worldwide radio audience. 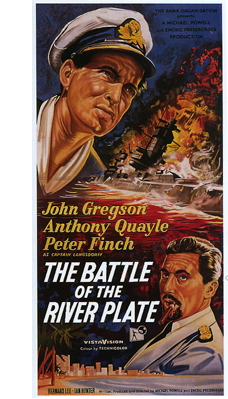 The movie is clearly a valentine to the intrepid British Naval forces that challenged a foe that far outmatched them, at least on paper. But Michael Powell typically refuses to cast the enemy as standard villains. Peter Finch’s Captain Langsdorff is afforded a great deal of sympathy as he is backed into a true no-win situation. His choice not to precipitate a pointlessly bloody battle for the sole purpose of maintaining Nazi prestige has been debated ever since. But for all practical purposes Langsdorff went down with his ship. He committed suicide in Buenos Aires only two days later.

ITV Studios Home Entertainment’s Region B Blu-ray of The Battle of the River Plate is a fine encoding of this handsome picture. Colors are excellent and no film damage is visible. The audio can be heard in the original English or in a German dub, but there are no English subtitles. I confirmed that the disc will not play in a Region A machine.

An alternate ending and a deleted scene are curious additions. The previous DVDs and the MGMHD cable presentations I’ve seen include the beginning of a Christmas party on board the Graf Spee, when German sailors enter the quarters of the captured English sea captains bearing gifts, food and wearing funny hats. The first minute of this apparently didn’t go over well in Germany (why?) so on this presentation it’s presented as a deleted scene. The ‘alternate ending’ is slightly different too. As the ships retire from the field of combat, one version includes additional glimpses of the principal players back in Montevideo, including Mike Fowler’s radio sign-off. Again, it would have been nicer just to see the longest cut interpolated into the film itself; perhaps a future Region A release will do this.

The restoration demo is simple enough, and an image gallery and a very ragged trailer are included. If they can play Region B discs, lovers of Powell & Pressburger’s adventure and war films won’t be disappointed.