Move over James Jones — Leon Uris clobbers the big screen with a sprawling adaptation of his WW2 combat novel, loaded down with roles for promising young actors. This is the one where twice as much time is spent on love affairs than fighting. War may be hell, but if Mona Freeman, Nancy Olson, Dorothy Malone and Allyn McLerie are going to be there for comfort, sign me up. 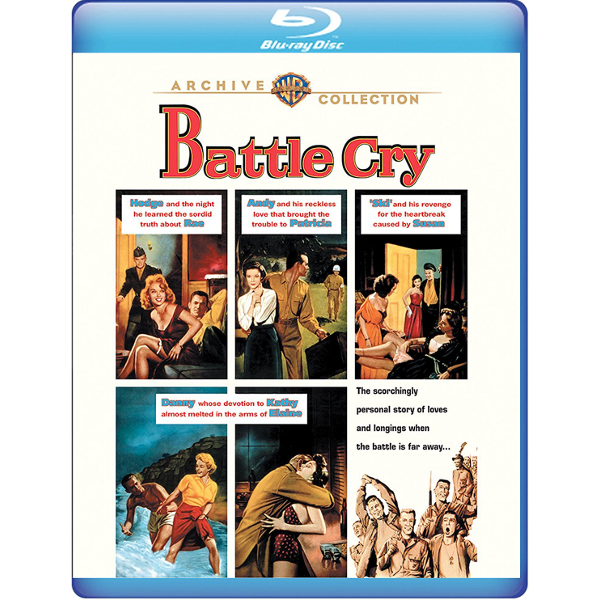 For three or four years after WW2, the studios decided that the public wanted a break from combat related fare. The flood of pictures revisiting action in Europe and the South Pacific didn’t start again until 1949. Not long after that, the marketers at MGM and elsewhere, heeding the data from the bean counters, decreed that all-male action pictures were inadvisable, because the ‘woman of the house’ made the family film-going decisions, and presumably wanted pictures with romance. Thus we have a movie about dropping the first Atom Bomb, with the main conflict being that killing thousands of people can be really tough on a pilot’s family life. 1954’s The Caine Mutiny, already lumbered with pages of added pro-Navy proselytizing, throws in an annoying, irrelevant girlfriend and a romantic vacation in a National Park, padding the picture by almost two reels.

Leon Uris first broke through with his 1953 novel Battle Cry, which essentially takes the James Jones The Thin Red Line formula, and as Tex Avery might advise, ‘Adds A Little Sex .’ The book is an ensemble piece about the men of a Marine battalion from training to combat, but a high school dropout named Danny Forrester gets the most attention. Warner Bros.’ 1955 film version of Battle Cry jettisons most of the combat material, gives almost all of the Marines a love interest, and concentrates much more on soap opera melodramatics. Join the Marines, kid — they make you march once in a while, but half the time you’re shacked up with AWE girls: Available, Willing, and Eager.

I used to make a joke of Battle Cry because I had only seen pieces of it in passing while channel surfing — I somehow landed on the same scene time after time, with hunky Aldo Ray flexing his muscles while felling a tree for the delight of Nancy Olson. The picture is much better than that, and scores appreciably higher than the similar ’50s soldiers ‘n’ smooching marathons Between Heaven and Hell and The Young Lions. Considering all of the bald enlistment propagandizing involved, the personal love stories come off rather well. War has broken out. The depleted Marine Corps gets in its first batch of volunteer recruits, eager to fight. Major Huxley (Van Heflin) decrees backbreaking training, with the idea that those Marines that can’t take it might as well drop out before they get into combat. His MSgt. Mac (James Whitmore) talks tough but is also an advocate for his men. The recruits are a cross section of All-American heroes. Danny Forrester (Tab Hunter) has a girl back home, Kathy (Mona Freeman of Angel Face) but when in San Diego begins a torrid affair with Elaine (Dorothy Malone), a USO worker married to a Navy officer. Washington lumberjack Andy Hookens (Aldo Ray) espouses a love ’em and leave ’em attitude until he falls in love with a young New Zealander war widow, Pat Rogers (Nancy Olson). Intellectual Marion ‘Sister Mary’ Hotchkiss (John Lupton) avoids women until he encounters swell dish Rae (Anne Francis) on a ferryboat; he later suffers a terrible disillusion when he learns that she’s one of many promiscuous girls seemingly available to anybody. ‘Ski’ Wronski (William Campbell) is serious about his girl Susan (Susan Morrow) but falls apart when she marries someone else. The outfit performs communications work during tough mop-ups at Guadalcanal and Tarawa, but also rests up in New Zealand, allowing for ample fraternization time. Then finally comes Saipan, where Major Huxley gets the company a perilous job in the first assault. Battle Cry plays much better in widescreen on a large monitor, where Raoul Walsh’s direction doesn’t seem so sluggish; we instead concentrate on the performances, which are better than average. ‘Standard’ but good input comes from most of the established stars. These include Van Heflin’s committed, stressed commander, and James Whitmore’s top kick sergeant, who serves as sort of a camp counselor to all the lovesick gyrenes under his wing. Whitmore’s ‘Mac’ character, by the way, is the narrator in author Leon Uris’s book, not the intellectual Marine who wants to be a writer some day. [For the record, my own uncle Glenn, who I was named after, was a Marine radio operator on Guadalcanal. As much as I wish, that fact doesn’t make me any tougher.]

I imagine that Warners was swarmed with agents angling to get their clients into the high-profile production Battle Cry, even actors already on the studio contract roster. ‘A- number one’ pretty boy Tab Hunter scored big with his Danny Forrester character, even if he isn’t quite yet up to some of the acting required. Although Tab’s drunken scene needs work, he’s not really bad in the role. He was/is so personable that he’d probably have scored the same roles and career with no talent at all.

Reversing the emphasis in the book, Danny is somewhat demoted in favor of Aldo Ray’s lumberjack character, Andy. The more established Ray excels as the beefy, outgoing skirt chaser, and projects so much personality when propositioning dames that we like him, and believe he could score. Ray’s scenes with the underrated Nancy Olson are quite affecting. When we see him go at that tree with a rusty axe, we want him to be our pal, too. I like Aldo Ray here more than I do in his more prestigious George Cukor film The Marrying Kind, where he has to play a clownish, stylized ‘nice guy.’ By the 1970s Ray’s career was all but finished because of personal problems, but he was an incredibly nice ‘nice guy,’ revered by the crews he worked with.

The rest of the company is a grab-bag of well done clichés. Perennially passed-over Perry Lopez is the company card-sharp and cheat. We’d prefer to see him get shot until he loosens up and pulls a truly good stunt in a Kiwi bar — suddenly his crooked ‘Spanish Joe’ character becomes a good guy too. Fess Parker strums a guitar but has few dialogue lines. I assume this was at the same time that his Disney Davy Crockett connection was transforming him into a national phenomenon, so he perhaps had one foot out the door from one studio to the other.

William Campbell had been around five years and was winning plum supporting roles with everyone from John Wayne to Kirk Douglas. For whatever reason, he never leaped to starring parts. ‘Mr. Invisible’ John Lupton is excellent as the book soldier Sister Mary, but his career quickly tapered off to steady TV work. Likewise Tommy Cook, a well-regarded juvenile performer (Cry of the City) who didn’t have the right combo of agent and breaks to advance to better roles. In 1955 the name of the game was to package dreamboat lover-boys with manufactured names: Tab Hunter, Rock Hudson, Ty Hardin, Troy Donohue. Completely from left field is actor Justus E. McQueen, a lanky joker from Texas with a big mouth. Although he eventually became a solid performer, McQueen’s broad acting is pretty painful. He grates here, and before he found his footing he’d really stink up movies like Toward the Unknown. Justus’s character in Battle Cry is Lamont Quincy Jones, or ‘L.Q.’. The actor immediately changed his name to match.

Nancy Olson takes acting honors as the most effective of the girlfriends; when her Pat turns Aldo Ray’s lady killer into a sweetheart, we know everything’s going to be okay. Mona Freeman’s Kathy doesn’t have much to do but romp around a fake seaside set with Tab Hunter’s Danny, and the pair’s scenes are rather weak. Dorothy Malone always made a positive impression, and her adulterous liaison with Danny is the film’s sexy highpoint. Her Elaine merely juts her chest out and suggests that she and Danny go for a swim, and we take the bait just like he does. Getting only three or four minutes of good screen time is Anne Francis, who tries to pick up John Lupton’s Sister Mary, and then must make amends by assuring him that he is special after all. This must be quality soap opera, because we pretty much have to agree that we’d take Anne Francis back no matter what she might do. It’s also great to see Broadway attraction Allyn Ann McLerie in several abbreviated scenes, as a waitress that Aldo Ray’s Andy hits on. McLerie is fine in both Calamity Jane (1953) and They Shoot Horses, Don’t They? (1969), and here she makes an impact both sexy and smart.

After waiting ninety minutes for the battles to start, most of the film’s fighting takes place in voiceover montages, with Marine and Army maneuvers standing in for the jungle warfare of the South Pacific. One nice touch is the inclusion of Navajo Marines. Pvt. Lighttower (Jonas Applegarth) is introduced in a bad hotfoot joke that has him hopping on one foot in a racist parody of an Indian dance. But the Navajos are treated with respect from that point forward. Their use as communicators in the field, speaking in a language the Japanese can’t interpret, predates by decades the ‘revelation’ in the 1990s of the contribution of Navajo ‘wind talkers’ to the Pacific campaign.

We see Japanese fighters in close-up for just one shot. Part of the cleanup of Uris’s book seems to have been to eliminate all the anti-Japanese sentiment that was of course the motivation behind the Marine’s training. By sentiment, I mean Jap slurs and murderous epithets. The strongest I’ve seen in Hollywood pictures is in Objective, Burma! (‘those monkeys ought to be wiped off the face of the Earth!’) and the Universal war picture Gung Ho! (‘I’ll tell ya why I want to be a Marine — I want to kill Japs!’).

The show may be a little slack at 2.5 hours, but like the Commander-in-Chief says, we knew we were getting into a long and loose war saga when we signed up. Raoul Walsh certainly wouldn’t be winning any directing honors but he does help his actors give the best they’ve got. Seen on a reasonably big screen in CinemaScope and without commercials, Battle Cry fulfills its mission.

The audio is a 5.1 stereophonic track likely sourced from the original stereo mix. The composer of note is Max Steiner, who leans heavily on martial standards but comes up with plenty of brassy mid-‘fifties WB underscoring. His score was nominated for an Oscar, but the statuette went to Alfred Newman, for Love is a Many-Splendored Thing.

The one extra is an original trailer that shouts the film’s importance.