Stanley Kubrick’s contribution to great cinema of the 1970s offers his vision of what an epic should be. Transported by images that recall great paintings of the period, and Kubrick’s new approaches to low-light cinematography, we witness a rogue’s progress through troubled times. And even Ryan O’Neal is good! 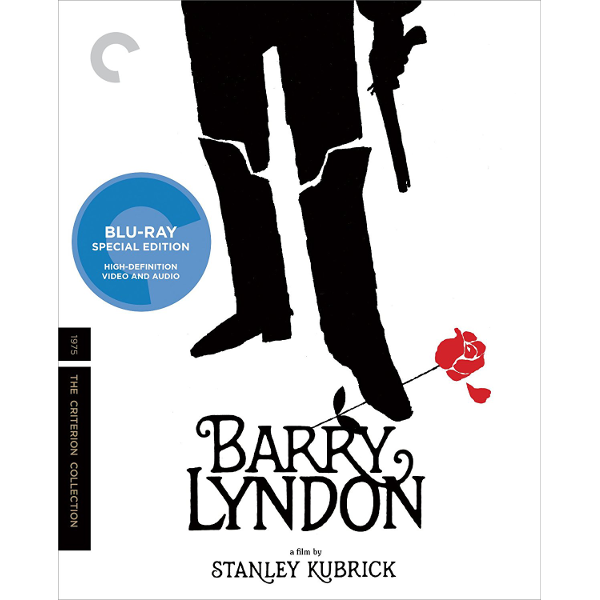 The past as Stanley Kubrick sees it is not a fancy storybook where notable people have a jolly time with warfare and adventures, seeking to benefit their fellow men and basking in the knowledge that their exploits will be immortalized in print. The director must have found himself in an amusing situation on Spartacus, charged with telling a story that was so against his personal preferences. The three-hour civics lesson about political oppression, slavery, freedom, etc. may be immensely entertaining and fulfilling, but if Kubrick had his way he’d likely remove every grandstanding lecture and ‘meaningful’ statement about human dignity. No, a Kubrick character is generally an individual that doesn’t see beyond his appointed position in a specific place and time in history. His armed robbers, soldiers, spacemen and juvenile delinquents do what comes naturally, without offering speeches about being part of some larger human crusade. Kubrick spent years preparing a movie about Napoleon, amassing a huge volume of research. Still fired up to make his own period epic, he chose Thackeray’s Barry Lyndon. Kubrick buries most of Thackeray’s satire, replacing Redmond Barry’s transparently self-condemning narration with droll, matter-of-fact voiceovers by Michael Hordern, and adding a few slightly satirical inter-titles. Otherwise, the story is told straight. Kubrick simplifies the narrative, inventing a few characters but sticking with Thackeray’s general story outline. The greater ironies Kubrick applies do not suggest an easy moral closure. Amazingly beautiful, the movie seems to say, “This is the past. Things were different, but people were pretty much as unpredictable as they are now, predictably virtuous or selfish. Stop expecting to reinforce your own petty values.”

Years after the end of the Hollywood Road Show, Barry Lyndon runs three hours and has an intermission. Young Irishman Redmond Barry (Ryan O’Neal) is proud, stubborn and self-centered, but he’s also strong and good-looking. In love with his cousin Nora (Gay Hamilton), he so spoils her efforts to marry her to the English Captain Quin (Leonard Rossiter) that his relatives (badly in need of the captain’s income) pull off a clever ruse with a duel to trick Redmond into leaving for Dublin. Robbed on the way and too ashamed to tell his mother (Marie Kean) of his failure, Redmond joins the Army. His first experience in battle convinces him to desert, and he steals an officer’s identity and flees to Allied Prussian territory. There his ruse is uncovered by the Prussian Captain Potzdorf (Hardy Krüger of The Flight of the Phoenix), who forces him to enlist in the far more brutal Prussian army. Redmond’s heroics in battle earn him Potzdorf’s gratitude and trust; the Captain enlists him as a police spy for his uncle. Redmond’s first quarry is ‘The Chevalier du Balibari,’ a suspected Irish mountebank. Redmond instead double-crosses Potzdorf and teams up with Balibari to wander Europe as gamblers, using sophisticated methods to fleece various noblemen. Under Balibari’s tutelage Redmond realizes that the only way to find security in life is to marry into money. Armed with his manners and good looks, he sets his sights on the beautiful Lady Honoria Lyndon (Marisa Berenson), whose elderly husband has a multitude of health problems. Critics slamming Stanley Kubrick’s films as cold and remote miss the point. His stories are packed with human emotion of all kinds, it’s just that he refuses to pull the melodramatic strings that convert the emotions into ordinary stage mummery: the music rises, the picture zooms into a close-up to catch a smile or a tear, and if needed a heavenly light gives an actor a convenient halo. Kubrick isn’t cold or cynical, but Life is. The director’s muted approach to satire doesn’t celebrate cynicism for easy jokes. Everybody acts in sincere earnestness. Redmond begins as callow and somewhat thickheaded; he learns to be devious by experience, and learning common sense: Soldiering is dangerous! He also discovers that his good manners and angelic face can get him most anything. Redmond seeks security and advancement, and isn’t too picky about how he gets it. Life is short and brutal, so why not give it go?

Kubrick’s visuals plunge us into the 18th century as interpreted by classical paintings. Assuming we’re not seeing special effects, Kubrick and his cameraman John Alcott made the actors wait in beautiful locations for perfect weather conditions at the perfect time of day. Establishing shots are wide views with longish lenses, flattening incredible scenery into images that look like they could be paintings. A recurring motif will frame a person in the center of a shot, walking or riding toward us from the distance. Psychologically speaking, I’ve always felt that there’s a correlation between distance in a composition, and distance in time. The 18th century is ‘remote’, but we can go there in our imaginations. A standard drama shows ‘important’ characters as they make crucial decisions, or explain their lofty motives to supporting characters. Nobody in Barry Lyndon steps into the rose garden like Greer Garson, to spout an author’s message at the first person that walks by. Kubrick skips all that nonsense, and instead just shows what Redmond does. The narrator fills in with the unspoken reasons for his actions. Barry’s big ‘decisions’ are often impulses that come directly from his emotions, such as when his stubborn pride causes him to challenge Captain Quin to a duel. His sudden tearful confession to the crooked cardsharp and confidence artiste Balibari is an honest gesture from one Lost Irishman to another. While it lasts, it’s a match made in bunco heaven. Redmond’s slow decline comes when he overreaches, betraying the love of his new wife and trying to buy himself a title. Entering the ‘peerage’ would apparently allow Redmond to inherit his wife’s property. Unfortunately, Redmond’s undisciplined ways and a lousy relationship with his stepson Lord Bullington (Leon Vitali) undo all of his bribes and entreaties. This is a rich vision of a bygone age. The large-scale battles defy modern common sense: as hiding or running would break some code of courage or chivalry, marching soldiers offer themselves as red-coated targets for lines of muskets. Redmond’s ‘learning experiences’ include a marvelous run-in with an old-fashioned highwayman (Arthur O’Sullivan), and a tearful farewell to his old friend Captain Grogan (Godfrey Quigley). Perhaps borrowed from Renoir’s The Grand Illusion, Redmond takes a break from war with a German woman (Diana Koerner) whose man is also off fighting. On his way up the social ladder, Redmond has some terrific luck, but it deserts him when he tries to become a man of secure property. After a public scandal, even his new friend Lord Wendover (André Morell) must ignore him.

Kubrick doesn’t shortchange his actors. Murray Melvin (A Taste of Honey) plays the parson and tutor for the Lyndon family. We think he’ll be used for clownish comedy, but the character turns out to be entirely ethical and worthy of respect. Only one moment seemed odd. Redmond steals a horse and uniform from a pair of gay English officers. Their dialogue is probably accurate for the period, but to us the scene plays like a Monty Python sketch, and takes us out of the carefully maintained period atmosphere.

Most critics in 1975 appreciated Barry Lyndon but the one aspect that won unanimous approval is its stunning cinematography. Kubrick’s technical acumen was advanced far beyond most directors, and his special effects billing and Oscar for 2001: A Space Odyssey was entirely earned. He overcame the challenge of lighting night interiors by helping develop a lens fast enough to shoot by candlelight. Film and video today barely need lights, but this was big news in 1975. The soft, warm images obtained for the show are marvelous, and also resemble classic paintings by the greats of the time. American Cinematographer routinely championed the work of name cameramen, but it could also take on a doubtful attitude about artistic statements, as when the Italian cinematographer Vittorio Storaro described his work in lofty psychological terms. But there was no denying the innovative genius demonstrated here. Kubrick’s innovations were always the talk of the Hollywood camera departments.

Seen now 42 years later, Stanley Kubrick’s Barry Lyndon seems more impressive than ever, a stylistic oasis from the 1970s. It’s not difficult to proclaim Kubrick a genius standing apart from average filmmaking. His pictures are distinctive and committed to excellence, and he’s much more of a humanist than he’s given credit for. The Criterion Collection’s Blu-ray finally gives us Barry Lyndon in a form that allows us to appreciate its visual achievement. I saw it flat and fuzzy on the old ‘Z’ Channel, where there was no way it would look good; I also walked out of a repertory screening of a scratched and slightly faded 35mm print. HD is just good enough for us to read the detail of the wide shots, and to decipher the texture of those candle-lit interiors. Warm and harsh, some of those shots have an almost impressionist quality.

Criterion offers Kubrick’s original mono audio but also a DTS multi-track re-mix. One Blu-ray disc is devoted to the feature’s two parts, and all the extras are on a second disc. A new featurette docu gives us input from cast and crew as well as an archived Kubrick interview; and two of John Alcott’s camera crew help out with a second docu piece on the movie’s visuals. A third item discusses the film from a fine art perspective.

The forty page color-illustrated insert booklet has an essay by Geoffrey O’Brien, and two of those American Cinematographer articles extolling the film’s innovative camerawork.