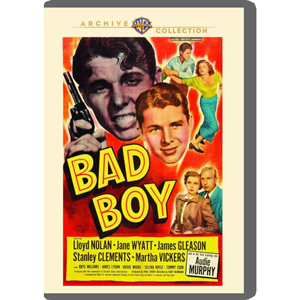 The American phenomenon Audie Murphy will forever be known as the most decorated soldier of WW2. His actions in combat were the stuff of hero worship for kids growing up in the 1950s. We remember him mostly for his later starring westerns, few of them particularly well made, where his appearance was sometimes a little bloated. Although thought of as being short, Murphy was 5’8″ and looked plenty lean in his earlier pictures.

Few of Murphy’s movies show his acting abilities in a favorable light. But he made at least three great films, two of them as a character actor for John Huston. In The Red Badge of Courage he plays against his popular image, as Stephen Crane’s universal soldier who at first believes himself to be a coward. In The Unforgiven Huston uses Murphy for a refreshingly honest image of an Indian hater, a frontier racist. As is typical for Huston, the character is also likeable and funny. It may be Murphy’s best picture. And in 1957’s Night Passage director James Nielsen gives Murphy the straight western hero treatment opposite James Stewart, with pleasingly positive results. He was a Texas kid and definitely knew his way around horses and guns, and for home-grown authenticity could hold his own against the Hollywood icon Randolph Scott or the USC football favorite John Wayne. Murphy wasn’t a natural actor but he was a natural. 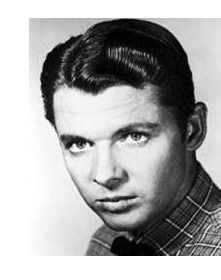 But life for Audie after the Army was not easy. After mustering out Murphy became responsible for what was left of his family, and he didn’t have the minimum of education to take advantage of the G.I. Bill. James Cagney sponsored him in preparation for an acting career, an arrangement that made news but didn’t last long, for beneath the positive PR was an emotionally unstable young man. He got a few movie bits but didn’t click until he connected with some Texas exhibitors who were investing in Allied Artists productions. As explained in this article, Hollywood had little faith in Murphy’s acting abilities. The Texas investors, led by an exhibitor-turned producer named Paul Short, proposed a movie about their ‘Boys Town’- like Variety Club Camp, a ranch home & reformatory for troubled kids (read: juvenile delinquents). Their money came with the demand that Audie get the lead role.

As it turns out, this starring showcase picture Bad Boy was ideal for Murphy. There are few demanding acting scenes. He roughs a few people up and threatens them with guns; he then puts on an emotionally untouchable act when the social worker types try to find out what makes him tick. ‘Producer’ Short made another film with Murphy, a western where he plays Billy the Kid. The movie was promoted as “a case of Juvenile delinquency from 70 years ago.” It led to a long-term contract with Universal, an achievement that unfortunately did not put the actor’s personal demons to rest. When John Huston hired Murphy for Red Badge of Courage he told author Lillian Ross that he perceived a rare quality in Murphy: behind the polite soldier boy manners, Huston sensed the calm nerve of a born killer.

Bad Boy begins similar to Monogram’s gangster picture Dillinger from four years previous. Not yet eighteen, the dangerous hood Danny Lester (Murphy) teams with another punk, Joe Shields (William F. Leicester, future screenwriter of The Last Man on Earth) to rob some gamblers in a hotel. Joe shoots a man and escapes; Danny is captured and brought before Judge Prentiss (Selena Royle). Danny’s record of violent crime militates against him, but social worker Marshall Brown (Lloyd Nolan) succeeds in having Danny transferred to his care at the Variety Club Youth Farm. Marshall can’t break through Danny’s two-faced, emotionally cold behavior. Danny worries Brown’s camp director, ‘Chief’ (James Gleason) but impresses Marshall’s wife Maud (Jane Wyatt) with his thoughtful and thorough work in her kitchen: he’s unusually respectful of women. Danny picks fights with the other boys, particularly the joker Bitsy Johnson (Stanley Clements, of various Bowery Boys movies) and straight-arrow Ted Hendry (Jimmy Lydon, of various ‘Henry Aldrich’ movies). Taking advantage of the camp’s honor system, Danny slips out at night to commit acts of burglary in the nearby town. He uses the stolen money to buy Ted’s horse. Forced to investigate Danny’s background on his own, Marshall discovers that Lester’s only living relatives Arnold (Rhys Williams) and Lila (Martha Vickers of The Big Sleep) are unpleasant revival-tent spiritualists. They have given Danny the idea that he’s responsible for the death of his mother, when she really died because of their neglect. But it may be too late, as Danny Lester is already threatening to launch another crime wave. 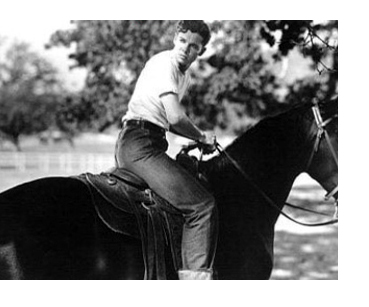 Bad Boy would indeed seem to be one of the missing links between the liberal “it’s not their fault!” social-activist juvenile delinquency movies of the 1930s, and the rather treacly “I’m a misunderstood innocent” pap sold in the teen crime movies exemplified by James Dean’s Rebel without a Cause. Fairly nimble in action, Audie Murphy convinces when fighting or brandishing guns, qualities that unfortunately have always been popular. It’s true that he has only a couple of attitudes to maintain, buttressed by a formidable group of supporting players. Lloyd Nolan is the concerned advisor, Jane Wyatt a potential mother substitute, and James Gleason his familiar crusty-but-lovable self. Otherwise the Allied Artists production seems a gathering spot for good players with stalled careers. Nolan never broke into the leading man category, and devoted his good playing to lesser roles and eventually TV. The grey-listed Jane Wyatt was at this time having to accept more marginalized parts, a situation that improved when she broke through as the perfect housewife on Father Knows Best. Jimmy Lydon, Dickie Moore and Tommy Cook were noted child & adolescent actors struggling in adult roles. Allied Artists’ own Stanley Clements is given a showcase scene playing guitar and singing a country western song. Five years earlier, Martha Vickers had made a big impression as the sultry nymphomaniac little sister in The Big Sleep. Like many actresses promoted by Howard Hawks, her big break didn’t lead to better roles. She became one of Mickey Rooney’s many wives.

Audie Murphy was still only 24 years old. Director Kurt Neumann definitely helped make look him good, and Bad Boy was enough of a success to advance the acclaimed veteran forward to his Billy the Kid movie. Neumann’s clean direction also succeeds in breaking away from the old, cheaper Monogram look. We don’t feel trapped in small interior sets, and it’s not obvious that Jane Wyatt’s work on location was very limited. Aided by designers Gordon Wiles and Theobold Holsopple, and the camerawork of Karl Struss, a pair of flashbacks to a younger Danny contrast stylishly with the airy scenes on the Honor Farm.

Murphy’s best acting is in the flashback, reacting in horror when he thinks he’s poisoned his own mother. We don’t object when Danny’s criminal life comes to a halt as soon as his ‘psychological’ issues are cleared up. The only depressing thing about the movie is that the Variety Club Farm appears to solve teen delinquency cases by shaping kids up and packing them off to the military. With the Korean conflict just a few months away, 1949 is bad timing for a mixed-up inductee into the infantry.

Director Neumann would continue with most of this group of artistic associates on his later genre films Rocketship X-M, She Devil, Kronos and The Fly.

The Warner Archive Collection DVD-R of Bad Boy is a clean transfer of this unusual B&W show, with Audie Murphy not as a soldier or cowboy, but a teen punk. Karl Struss’s cinematography is better than the Allied Artists norm for this time, giving Jane Wyatt and Martha Vickers attractive close-ups.

There are no extras. I looked but found few good ‘free range’ images online to illustrate the review.