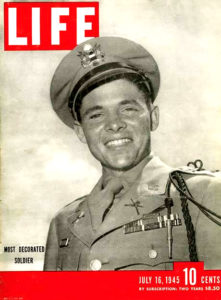 “My temper was explosive… perhaps I was trying to level with my fists what I assumed fate had put above me.” – To Hell and Back, Audie Murphy, 1949

A remarkably self-aware assessment for such an angry young man. To hear him tell it, Audie Murphy came out of the cradle itching for a fight—when Pearl Harbor was attacked, he got one. He was only 16 at the time so he marched down to the recruiting center and lied about his age. In 1945 Murphy left the Army as the most-decorated soldier of World War II. In 1971 his twin-engine plane crashed into a mountainside in Virginia’s Roanoke County killing everyone on board. In the 26 years between the end of the war and the end of his life he acted in 45 movies and five television series.

His began his film career in standard issue westerns but unlike most of his cowpoke contemporaries,  he felt like the real thing. He was modest to a fault—he responded to one director’s complaints about his “wooden” acting with “You forget I’ve got a hell of a handicap.” “So what is this handicap?” replied the director. “No talent.” said Murphy. He did suffer one very real obstacle; it was post-traumatic stress disorder and it moved the Medal of Honor recipient to sleep with a loaded German Walther pistol under his pillow.

That war-torn attitude led to the cautious and sometimes confrontational demeanor that colored many of his performances. His film debut was directed by William Castle in a fluffy romantic comedy, 1948’s Texas, Brooklyn and Heaven in which he had a walk-on as a copy boy. His dark side spilled out in his first starring roles where he played anti-heroes or outright villains; a juvenile delinquent in Kurt Neumann’s 1949 Bad Boy, Billy the Kid in Neumann’s 1950 The Kid from Texas and Jesse James in Ray Enright’s Kansas Raiders from that same year. 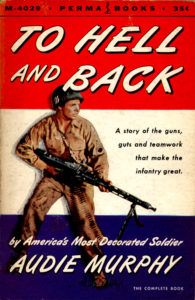 In 1955 Murphy enlisted again—this time at the ripe old age of 31—when he signed on for the true-life war film To Hell and Back. Directed by former pro footballer Jesse Hibbs, the movie was based on Murphy’s own ghostwritten autobiography, the story of a shy Texas farm boy who finds fame and fortune as a brilliant killing machine. The production carefully sidestepped any mention of Murphy’s confessions about mood swings or violent outbursts though that anger was hiding in plain sight. With four hours at his disposal and a superb Robert Bolt screenplay, David Lean still couldn’t get inside Lawrence’s head—Hibbs and screenwriter Gil Doud, eager for a feel-good story, didn’t even try. And Murphy’s fabled humility works against him here—even when leading the charge he seems to fade into the background. Nevertheless, the movie was an enormous hit—Universal’s biggest box-office performer until Jaws. 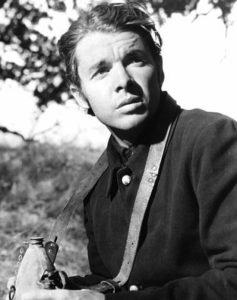 It was John Huston who revealed Murphy’s classical bent in his elegiac adaptation of The Red Badge of Courage. The young veteran’s performance as a greenhorn Union soldier anchors the MGM production even though it was the victim of one of the most infamous studio hatchet jobs in history, chopping Huston’s two hour meditation on Stephan Crane’s novel down to 69 minutes. The 1951 film has a timeless quality and Murphy’s presence is haunting—like an exile from a Matthew Brady photograph.

Murphy went on to spend the better part of his career slumming in war movies and cowboy films. While many of those movies were forgettable matinee fodder propping up the bottom half of double bills, some offered clues to the tight-lipped actor’s real passions. In 1958 he starred in The Quiet American—far from B movie territory the film was written and directed by Joesph Mankiewicz and co-starred Michael Redgrave. Set in Saigon in 1952 during the Vietnamese insurgency, the film drew critical praise along with controversy—Mankiewicz took Graham Greene’s book about U.S. intervention in Indochina and turned it into what the author called a “propaganda film for America.” Murphy made clear that if that change hadn’t been made, he wouldn’t have done the film. In 1961 he did the narration for War is Hell about a soldier who prolongs a battle for the sake of a few more medals. For Murphy, a proud but reluctant hero, the story was a stern warning to glory-seeking soldiers. 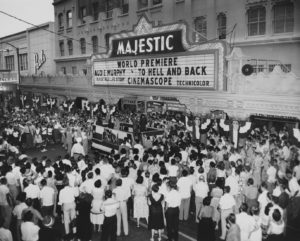 Murphy first worked with Budd Boetticher in 1952’s The Cimarron Kid. In 1969 he rejoined the director for A Time for Dying in which he played Jesse James a second time. It was the last film for both men. Murphy’s final years were full of trouble—he lost a small fortune in an Algerian oil venture and in 1970 he was arrested and later acquitted on a murder charge. But despite moviegoers embracing counter-culture heroes like Elliot Gould and Dustin Hoffman, Murphy’s All American story maintained its hold on the public. Some of that was glossy-eyed nostalgia for his cowboy fare but it was To Hell and Back, that CinemaScope tribute to Murphy’s glory days, that continued to resonate. The film remained a touchstone for the actor to the end of his life—it was being broadcast on New York’s WCBS on May 30th, 1971, the same day they were searching for his body on that Virginia mountainside.

Kino Lorber has collected three of this complicated man’s films in a new box set with the suitably brusque title, Audie Murphy Collection. The set features three of his most enduring westerns, one of them a shockingly good thriller highlighted by Murphy’s malevolent performance as a baby-faced killer in Clint Eastwood drag. 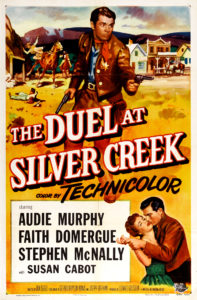 In Don Siegel’s The Duel at Silver Creek Murphy plays Luke Cromwell, a card shark on the trail of the men who killed his father. Luke’s success with poker and a gun earns him a nickname out of Zane Grey, “The Silver Kid.” His rogue’s reputation is put to rest when he’s deputized by Marshal “Lightning” Tyrone played by Stephen McNally. A mercenary no longer, Luke finally has the law on his side to avenge his family.

It’s really McNally’s film—savvy directors like Siegel discovered that surrounding Murphy with seasoned veterans helped smooth out the rough patches in their young star’s performances and sometimes those actors, confident and charismatic, would inadvertently take precedence over the neophyte. Siegel’s oater flips from horse opera to soap opera with the arrival of Faith Domergue as Opal, a sultry beauty with a mean streak (in her first scene she promptly strangles a man) and Susan Cabot, a pretty but feisty young tomboy—they both have their eye on McNally but for distinctly different reasons.

Though the cast and Gerald Adams’s script are serviceable at best, Siegel’s direction (this was just his fourth feature) already shows signs of the exacting style that marked his later work. The most thrilling aspect of the film remains Irving Glassberg’s ravishing Technicolor photography. 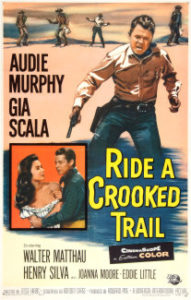 Borden Chase wrote the screenplay for this genial comic-western and there are enough unpredictable moments and oddball characters crowding the film that it takes on the off-kilter nature of a Robert Altman movie (Matthau’s character lives on a gently swaying houseboat that adds a silent comedy touch to some scenes). Chase risks portentousness with the amusingly contrived name he gives to Murphy’s two-faced cowpoke, “Joe Maybe” but the cheeky joke plays into Murphy’s unknowable nature—onscreen and off.

Gia Scala’s range was as limited as Murphy’s but the Liverpool-born Italian is completely charming as Tessa, the Creole beauty who masquerades as Maybe’s wife. Chase’s son Frank appears on the sidelines as one of Kyle’s hangers-on. Primarily a screenwriter like his dad, the younger Chase’s profile is most recognizable as the excitable deputy who cuts a rug with preeminent B-movie sexpot Yvette Vickers in Attack of the 50 Foot Woman.

This was Matthau’s eighth screen performance, still a few years away from his breakout appearances in Lonely are the Brave and Fail Safe. Crowned by a ridiculous grey wig the 38 year old Matthau gives his perennially soused lawman a W. C. Fields drawl that becomes even more cartoonish in scenes with the subdued Murphy. Harold Lipstein was responsible for the fine widescreen cinematography and Universal musical stalwart Joseph Gershenson handled the score, a mix of cues from various Universal soundtracks. 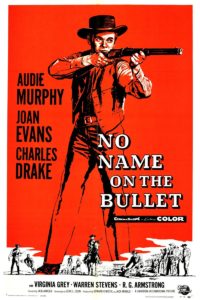 Jack Arnold directed few westerns but he knew his way around alien invasions. He turns No Name On the Bullet, set on the dusty streets of a backwater Arizona town, into a suspense film with the paranoid atmosphere of a Cold War sci-fi thriller. The invader is John Gant, an enigmatic gun-for-hire with an unknown but surely ominous agenda. The townsfolk are a guilty lot and each one is convinced that Gant has come for them. They’re kissing cousins to the citizens in The Twilight Zone episode, The Monsters are Due on Maple Street—that is, they behave like trapped animals and are just as dangerous.

Murphy’s compact stature works to his advantage here, with his stiff-backed gait and sepulchral uniform, he’s a more cold-blooded killer than Yul Brynner’s robotic gunslinger in Westworld: in response to one potential victim’s startled cry “Why didn’t you kill me?” Murphy replies, “I wasn’t paid to.” That chilling bit of dialog was written by Gene L. Coon (a prime creative talent behind Star Trek) and he gives the most ancillary characters, including Charles Drake, R.G. Armstrong, and Whit Bissell, a reason for being. Even future New Rochelle dentist Jerry Paris has a small but colorful turn as a nerve-wracked deputy. 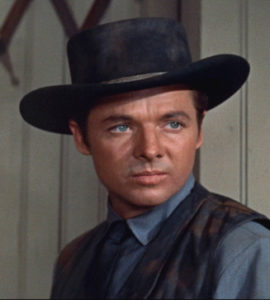 Herman Stein’s typically overheated music is oddly fitting for this intense film—particularly the Max Steiner-like pathos of the title theme. Arnold and Murphy keep both the townspeople and the audience off-balance till the film’s shocking finale—an implied rape followed by a metaphorical castration that is as nihilistic an exercise in old West justice if ever there was one. Harold Lipstein photographed this in Eastman Color, the same system he used on Ride a Crooked Trail. The process produces less lustrous results than Technicolor’s radiant hues—an effect that would have done Arnold and Coon’s hymn to anarchy a real disservice—this is not a pretty picture.

Though it’s a puzzlement why Kino Lorber would place three such short films on three separate discs, there’s little reason to carp. The features, one Academy ratio and two in CinemaScope, look fabulous. The only extras are a helping of trailers and commentaries from Steve Mitchell and Gary Gerani (for No Name on the Bullet) and Toby Roan, the human AFI Catalog (on The Duel at Silver Creek and Ride a Crooked Trail).

Here’s Joe Dante on No Name on the Bullet:

Here’s Joe Dante on The Red Badge of Courage: