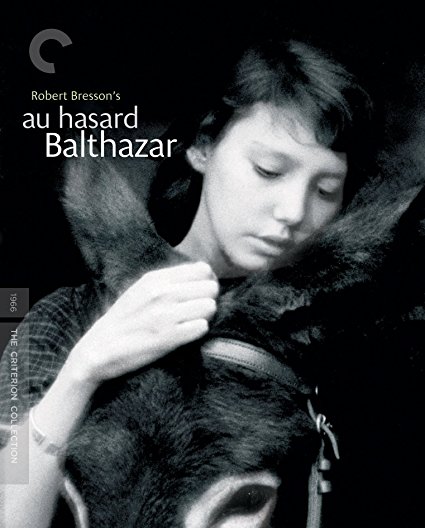 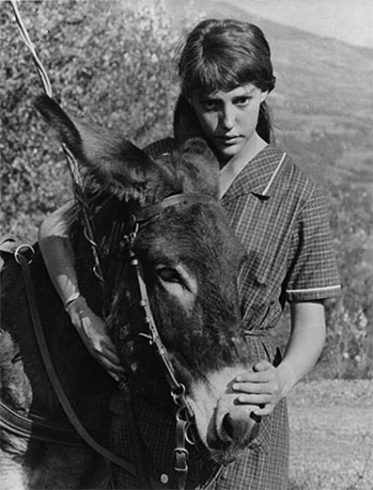 At moments in his career Robert Bresson, the filmmaker behind The Trial of Joan of Arc and The Diary of a Country Priest, seemed to be directing from the pulpit. Likewise, Au Hasard Balthazar, his 1966 film about a messianic donkey, just begs to be canonized – unlike most grabs for cinematic sanctitude, Balthazar deserves its pedestal.

A movie out of time, Balthazar‘s somber black and white landscape rebuffs its own era – a pop art wonderland that produced Blow Up, Modesty Blaise and Our Man Flint. Jean-Luc Godard, rule-breaking bomb-thrower of brightly colored social satires, heaped on the praise – “… this film is really the world in an hour and a half.” On the other hand, Ingmar Bergman, not exactly a popcorn munching thrill-seeker, thought it was a “bore”.

A soulful examination of human frailty and earthly spirituality, Bresson’s film has been projected in churches as well as theaters – watching it from the vantage point of a pew only enhances its resemblance to a particularly melancholy Sunday School parable.

In a small town in northern France, a baby burro is entrusted to a little girl who raises him as a combination playmate and confidant. Marie is more reflective than most seven-year olds – taking part in a makeshift baptism, she christens the cuddly critter “Balthazar”, after the Magi, and settles in for the first of many uncertain summers with the donkey her only abiding companion.

Marie’s father suffers a financial calamity and Balthazar must be traded off – away from the donkey’s influence, she becomes untethered – now a sullen teen with her mind on more worldly pleasures, Marie engages in a romantic version of musical chairs and lands on a smirking sociopath named Gerard. Balthazar’s fate is even more precarious.

Expelled from the manger, Balthazar begins an arduous journey reminiscent of that other holy fool, Pinocchio; shuttled between cruel villagers and boorish circus folk, abused, starved and left out in the cold (the little puppet shows his solidarity by transforming into a donkey – letting out a very Balthazar-like bray). Our hearts break at the sight but the beleaguered mule remains heroically stoic.

Such is the circular nature of small town dramas – Balthazar winds up in the grip of the monstrous Gerard. Worse, the unlucky animal is drawn into a confrontation in which the hateful delinquent escapes but Balthazar is mortally wounded. On cue, a flock of sheep appears over the hill and surrounds the dying donkey – Balthazar, who lived most of his life as a beast of burden, ends it as a shepherd.

Balthazar is quintessential Bresson, each scene lasts not one second longer than necessary, a technique that feels both swift and leisurely – the director takes his time but he doesn’t waste it. The movie sticks to your bones the way three hour blockbusters could only dream of.

In a nod to Hitchcock’s manipulative ways, Bresson referred to his actors as “models” and used mainly untrained amateurs for his films. Anne Wiazemsky as the self-loathing Marie, François Lafarge as the contemptuous Gerard along with the rest of the cast – while not merely pawns in his game – are certainly slaves to their director’s whims. Bresson might have happily copped to a God complex.

The photography was by the brilliant Ghislain Cloquet, the artist responsible for the pastoral splendor of Demy’s The Young Girls of Rochefort and Woody Allen’s Love and Death. His black and white work on Balthazar is no less exquisite and the wonderful new Blu ray release from Criterion captures every bristling hair on Balthazar’s weary shoulders. The package comes with a few worthy supplements including: