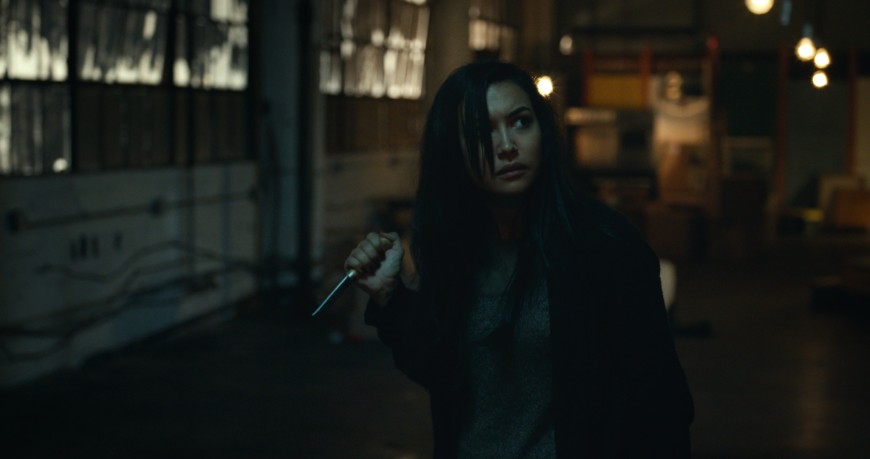 Sometimes getting there is more than half the fun. When it comes to genre storytelling, the buildup toward a presumably satisfying conclusion can create so much anticipation that the big reveal can’t help but end up something of a letdown. You can see the fingerprints of this dilemma in the way the recent sequel/remake of The Town That Dreaded Sundown lifted its endgame strategy right out of the Scream playbook, eschewing completely the free-floating sense of helpless fear that characterized the uneven 1976 original at its best. The Lazarus Effect, currently tiptoeing out of theaters and toward a Redbox near you, traded in well-crafted suspense spun from the mystery surrounding its central concept—What really happens when we die?—for a murky, standard-issue killer-on-the-loose scenario, complete with a cynical nod to a sequel that no one wants to see. And the inexplicably acclaimed You’re Next didn’t bother with a coherent tease at all, leaping whole hog into a bogus, indie-tinged dysfunctional-family-besieged-by-masked-psychos model in which its shocking reveals are consistently undercut by “realistic” characters who are as determined as the dimmest Crystal Lake camp counselor to behave only in ways that quicken their march to the slaughterhouse.

But what if the tease could be an end in itself? It’s a question writer-director Nicholas McCarthy (The Pact) considers in his most recent movie, last year’s At the Devil’s Door. McCarthy’s movie displays a remarkable assurance of style and purpose, especially for a movie that on one level seems to function experimentally, as a challenge to the expectations of a genre audience which seems equally at ease either swallowing well-worn formulas whole or rejecting them with a collective scoff. The movie begins with a satanic shell game in which a young girl (Ashley Rickards) sells her soul, only to eventually conclude that suicide is the only way out of the hellish bargain. Years later, a real estate agent named Leigh (Catalina Sandina Moreno) is trying to prepare the house where the girl died and sees a mysterious figure in a red rain slicker and matching crimson sneakers skulking about the house. Her attempts to discover the identity of the girl lead her, and eventually her sister Vera (Naya Rivera), toward a realization that what the demonic force bumping its way through the movie’s dim suburban hallways really wants is just a place to call its own.

McCarthy’s strategy is to build the movie almost entirely on a foundation of pulsating dread, on the energy generated by the anticipation of horrors to come. At the Devil’s Door tempts viewers who may think they want only on-schedule gore and shocks with the prospect of using camera movement and sound and light (or the lack thereof) to tantalize that audience and lead it toward understanding and exploiting the more genuine fear generated by the imagination.

The movie’s original title, Home, evokes a sense of the uneasy spirits (including the three main characters) seeking their ultimate refuge, as played out in images and settings evoking the economic discontent of bland suburban settings that McCarthy and his cinematographer Bridger Nielsen, as they did in The Pact, make palpably unsettling. But it also conveys, with a masterfully contagious confidence, the fearful pleasures of standing at the devil’s door, imagining what horrors might lie in wait on the other side and being unable to resist turning the knob and walking on through.

The movie employs creatively creepy sound design, which evokes blood pulsating through the temples and a gnawing discontent in the gut, to prime viewers for a series of subtle jump scares that actually work to build the mood, not shatter it. (There’s one that can stand toe to toe with the moment in Jaws when Hooper peeks through the hole in the hull of Ben Gardener’s boat. That’s all I’ll say.) And as the movie builds, the structure which once seemed frustrating, trifurcated between the chronologically intertwined stories of the three women, begins to take on a shape and a feeling that happily seems nothing like the cookie-cutter shapes in which the majority of modern horror movies are formed. McCarthy teases the expectations of the audience, tests their willingness to go along for the ride, and trusts they will accept smaller doses of shocks in deference to a storytelling method that pays off with an overall cohesiveness that is very satisfying indeed. (Some audiences may be less willing—for them the movie may feel elongated, with too much buildup, not enough relentless, pounding horror. Oh, well.)

At the Devil’s Door is at times reminiscent of the films of John Carpenter, Roman Polanski, George A. Romero and Nicolas Roeg among others, but not through hollow homage. This director finds ways to synthesize the influences of his heroes, and other less familiar ones (the movie is dedicated to iconic Spanish horror director Jess Franco), into something entirely his own. On the strength of his first two features alone, McCarthy has become adept at exacting measured suspense by examining the thick dread to be found in nondescript, darkened corridors cluttered with suburban kitsch or lined with frayed, discolored wallpaper. When you watch this movie or The Pact, you sense you’re in the hands of someone for whom the horror genre is rich with possibilities and meaning, not simply a means to other career ends.

All this strangely mundane atmosphere lends itself to an overall effect that perhaps couldn’t have been anticipated. After having seen it during a very short theatrical run last fall, I cued up At the Devil’s Door courtesy of my Netflix streaming account last weekend. As my daughter and I watched it together on my big-screen TV, I realized that the minor frustrations I’d had before with the movie’s pacing and its reluctance to parse out more of those big payoff moments had all melted away. At one point someone speculates to Vera, after she begins investigating the mystery behind the woman in the red raincoat for herself, that the demonic force slouching toward her wants to be all of someone. It’s just looking for a home. How perfect, then, that this challenging, atmospheric, ultimately disturbing thriller, should find its most effective manifestation in our living rooms, where all our defenses are at half-mast. Turn the lights down, turn the sound up. At the Devil’s Door will get ya.