Once upon a time a movie could really send you out of the theater with a smile on your face (Don’t make me explain what a movie theater was). James L. Brooks scores here with another fine entertainment, creating yet another character for Jack Nicholson to hit out of the park. But the generosity of characterization anoints the entire cast, especially Helen Hunt, the most emotionally deserving working woman since Shirley MacLaine’s Fran Kubelik. Nicholson’s miserable curmudgeon is once again a guy who learns how to be a mensch, at least a little bit. It’s an old story but Brooks makes it new again. 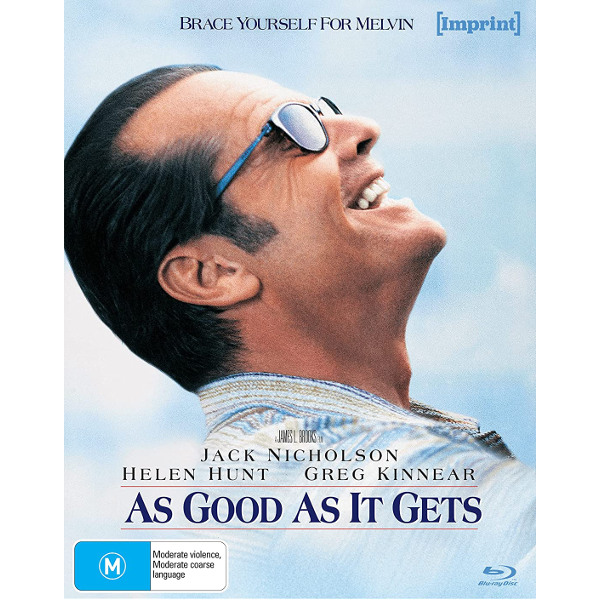 James L. Brooks isn’t just the man behind The Simpsons, he began creating entertaining movies and TV shows ages ago, as a writer, director and producer. His six feature films as director include three big successes: Terms of Endearment, Broadcast News and this disarmingly upbeat show from 1997, As Good As It Gets. It’s the kind of movie that connects with audiences on a personal level. By the middle 1990s pictures with this kind of warm audience appeal were becoming rare; one usually had to peel back several layers of irony to find an honest observation about people. The sentimental revelations in As Good as It Gets are simple enough: although everyone has problems relating to the world, we’re all interconnected, and we can help each other. Does that make it a modern fairy tale? 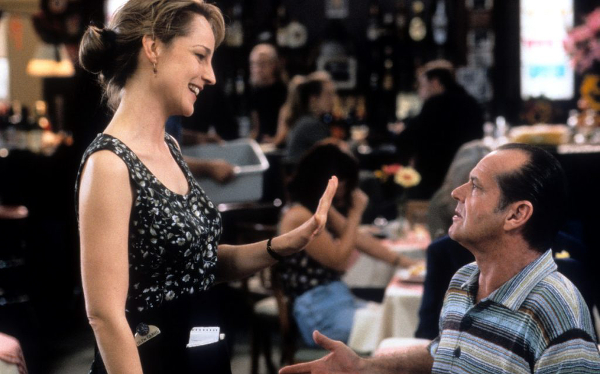 As Good as It Gets isn’t a practical guide to the real world. Its basic setup initially sounds like an out-of-control TV sitcom. Successful romance novelist Melvin Udall (Jack Nicholson) is a severely impaired obsessive-compulsive. Blindly abusive of other people, he has a terrible habit of unleashing vile verbal onslaughts at the slightest provocation, and at the least deserving targets. He’s also a racist, an anti-Semite and a homophobe. He’s so disconnected that he shoves his neighbor’s dog down his apartment building’s garbage chute.

Misanthropy is as misanthropy does. Melvin’s abuse is most strongly felt at his morning breakfast stop, where he cannot be happy unless he’s served by his favorite waitress Carol Connelly (Helen Hunt). Carol’s life is a mess — she cannot afford proper medical care for her asthmatic son and she’s too harried to enjoy any kind of personal life. Meanwhile, Melvin’s artist neighbor Simon Bishop (Greg Kinnear) becomes the victim of a savage beating. Simon’s slow recovery is compounded by news from his manager Frank Sachs (Cuba Gooding Jr.) that he’s also flat-broke bankrupt. The incredibly insensitive Melvin begins to open up when he allows two radical changes to his near-psychotic routine: he takes in Simon’s dog, and he intervenes to help out with Carol’s son’s medical problems. This comes as a shock to Carol, who fears that the outrageously unpredictable Melvin may demand some kind of physical relationship in return. Melvin’s mixed motivations turn out to be as frustratingly mysterious to him as they are to his new friends. He has to learn what a friend really is. 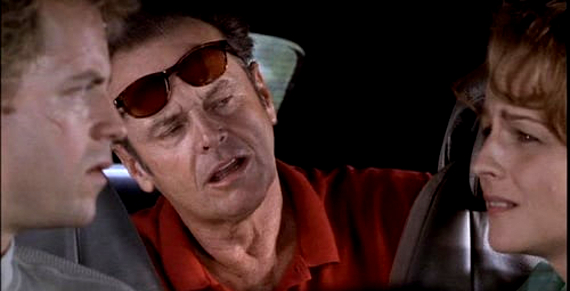 James Brooks clearly did not have to submit As Good as It Gets to a committee. The show is proof that a pleasing entertainment can be made from elements less than original. It’s very much like an old studio product that custom tailored all the roles to the personalities of the stars. Jack Nicholson cruised through a goodly percentage of his mid-career films on automatic, flashing his devilish smile and other familiar schtick, with a few sharp line readings thrown in. He was good at it, scoring a high average of hits. Melvin Udall’s nasty remarks to his gay neighbor and a pair of Jewish cafe patrons are unforgiveable, and experience tells us that attitudes like his don’t get ‘cured’ by a mere change of heart. Yet Nicholson pulls it off by convincing us that Udall is an unusually interesting monster, a guy so mal-socialized, he repels nice people as if he were made of anti-matter.

These scripted characters have free will as opposed to being compartmentalized by their particular problems … the Neil Simon confectionary specialty. Carol needs romance so badly that she thinks her hot-to-trot Friday night date won’t mind making love with a sick child and a nosy mother (Shirley Knight) in the next room. Simon is such a trusting fellow that he becomes an easy mark for the cohorts of the street hustler (Skeet Ulrich) that he invites in as an impromptu artist’s model. The dialogue is reasonably unforced and free of easy comedy lines. Melvin Udall thinks that he’s tossing out comedy zingers when they’re all really hateful statements. He can’t tell the difference. Like someone with Tourette Syndrome, he blurts out hurtful lines and then struggles to understand what he’s done wrong. 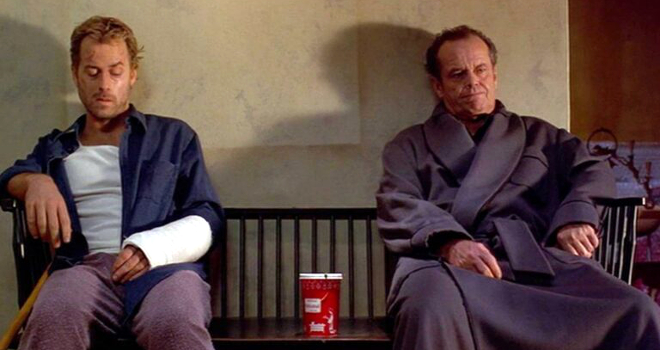 The movie IS often very funny, between bouts of dramatic concern for its characters. Only Jack Nicholson could get away with the clown act of waving a little dog around in panic as it piddles all over the hallway of a fancy Manhattan apartment building. The filmmakers must have had fun, rigging a ‘puppy squirt gun’ gag to make that work.

As is typical with Brooks the casting is inspired. Jack Nicholson really delivers, turning in a much more interesting performance than his amusing but effortless astronaut in Terms of Endearment. When Melvin Udall speaks we get ready to cringe. Melvin ignores his doctor’s orders to take pills that would even out his worst mood swings. The chemically imbalanced aspect of his character isn’t emphasized, allowing us to intially conclude that Udall is a rotten SOB sorely in need of chastisement and/or redemption.

Brooks sourced some of his great players from television. Helen Hunt is perhaps the most felicitously cast actress of the decade. She fits Carol Connelly like a glove and her every scene is a keeper. Carol the tolerant waitress is patient and understanding but also no pushover — when she blows up she really gives Melvin a piece of her mind. She’s the doting mother without begging for sympathy. Anybody can relate to Carol’s reaction when Melvin’s ‘surprise doctor’ (Harold Ramis) shows up to sort out her son’s allergy problems. Both Nicholson and Ms. Hunt took home Best Actor Oscars, which only seems proper. 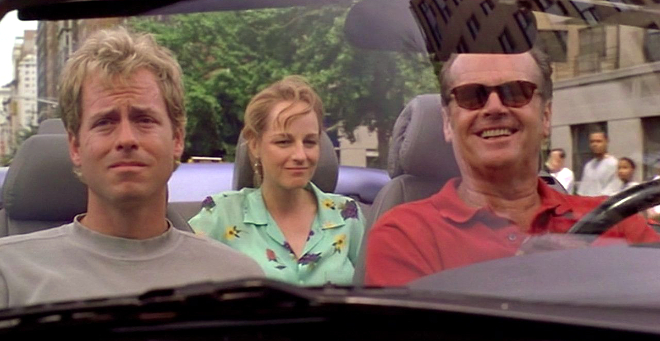 Did As Good as It Gets put Greg Kinnear and Cuba Gooding Jr. on the map?  Both were plenty busy before. Gooding really arrived, I suppose, in the previous year’s Jerry Maguire. Activist critics could perhaps frown at Kinnear’s Simon as a safe & unthreatening gay character. His sex life is not part of the on-screen dynamic. It’s interesting that the film’s most erotic scene is used to demonstrate Simon’s commitment to art. He becomes ‘excited’ by the beauty of Carol preparing a bath. The film avoids making a big statement about gay men and straight women, or sexual preference. Or maybe it does — people can become instant and affectionate friends without sex being necessary. Surely 20,000 actresses and wanna-be actresses saw Helen Hunt as Carol and cried, praying to someday land a once-in-a-lifetime role like that.

As Good as It Gets eventually brings its character conflict into focus with that standby device, the Road Trip — another cliché that here works like charm. Things are left ragged but hopeful, with Melvin getting serious about changing his neurotic dead end of a life (you know, the one where you’re also a famous and wealthy author). He really doesn’t want to blow his chances with Carol — going so far as to step on the cracks in the sidewalk. Audiences left As Good as It Gets feeling light on their feet, the sure mark of a superior entertainment. But it’s also possible that viewers simply appreciated a show that respects a range of human feelings. Movies like this shouldn’t be missed. 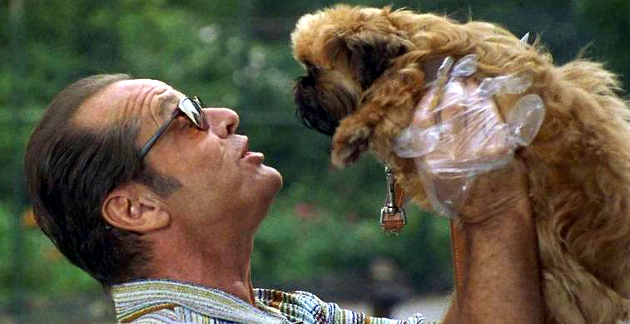 Viavision [Imprint]’s Blu-ray of As Good As It Gets pops up fine and bright in HD; the image looks the same as it did on the older Twilight Time disc. Spinning on a 4K player, up-rezzed, it’s even punchier. There are no complaints. For Helen Hunt’s tasteful bathtub scene the colors shift to very warm hues that on the old DVD would have ‘oranged-out’ (that’s a sophisticated technical term that only top colorists use…). Here, the visual experience beats what I saw in a theater.

Viavision provides an isolated track of Hans Zimmer’s light & friendly music score, which was possibly produced by Twilight Time as well — I wish other labels could follow through more on that particular extra. The fine older commentary track with Brooks and his three stars is a friendly listen. Nobody’s nervous or trying to score points; Jack Nicholson comes off as charming, never hogging the mike and contributing compliments for many of the supporting players. A trailer is present as well.

I was most impressed by Ian Mantgani’s visual essay. His talk about the movie hit on numerous points unfamiliar to me or my approach. He starts by relating the Melvin Udall character to the rising awareness in the ’90s of psychological obsessive-compulsive conditions and the like. in his 15 minute minutes Mantgani also says a lot about Brooks’ roots in sitcoms, the appeal and limitations of the form, and the ways in which As Good As It Gets surmounts them: it takes 100% acting personality to allow the almost intolerably caustic Melvin to transform into a warm / fuzzy guy, and Helen Hunt and Greg Kinnear’s characters can easily be boiled down to sitcom clichés — if we want to do so. This movie marshals the power of star/actor personalities as did classic Hollywood films, pulling us through a shared emotional experience about everyday people — that has the uplifting message that everyday people are extraordinary. I wasn’t thrilled with Mantgani’s piece on The Straight Story but after this I’ll be looking forward to what he has to say next.

The disc box calls out HOH subtitles … on one machine I couldn’t get them to play but on a second player they popped right up, so I have to assume my one machine is in fault. It’s a big risk when one finds a ‘problem’ with a disc — I once burned a bridge with Blue Underground, stupidly calling out a serious problem that was not their fault, but mine. I always try it in two players now.

This movie makes me miss Jack Nicholson, one of the few big stars left that could make thoroughly nasty characters fun to watch. He stopped acting in 2010. He was terrific in Martin Scorsese’s The Departed and came off well in Alexander Payne’s About Schmidt. The crowd that responded well to As Good as It Gets came back to see him with Diane Keaton in Nancy Meyers’ Something’s Gotta Give, as another over-the-hill bad boy who learns a late lesson about love. I remember it having some good scenes and good laughs, but it didn’t go over quite as smoothly as Brooks’s film.