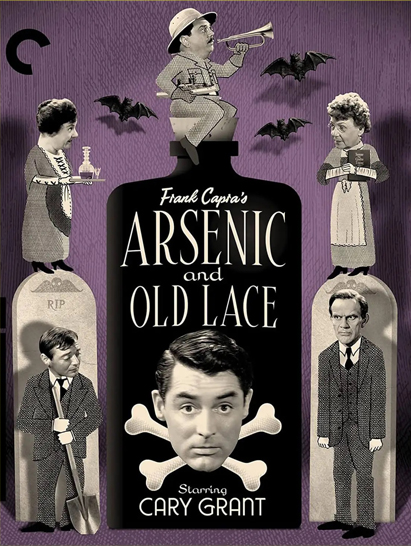 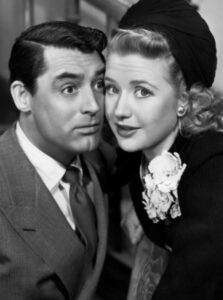 Almost supernaturally handsome, Mortimer Brewster is quite the catch; a celebrated man about town and theater critic who saves his most acerbic reviews for matrimony, Mortimer’s latest bestseller is a typically curdled diatribe called Mind over Marriage. He’s a tough egg to crack but leave it to his childhood sweetheart, a pretty strawberry blonde named Elaine Harper, to cure Mortimer’s gamophobia—and what better time for a nervous bachelor to get hitched than Halloween?

Their honeymoon is just around the corner but first the newlyweds have family business in Brooklyn, home to Elaine and Mortimer’s childhood haunts. They don’t realize just how haunted; the cozy Brewster homestead has been transformed into a makeshift cemetery where bodies are stored away in window seats and buried in the basement—and Mortimer’s aunts are happy to take all the credit.

Frank Capra filmed Arsenic and Old Lace in 1941 with Cary Grant and Priscilla Lane inheriting the roles of Mortimer and Elaine from Allyn Joslyn and Helen Woods in the stage production. Due to contractual obligations, Warner Bros. was compelled to delay the release till the Broadway version closed shop in 1944. One of the most successful runs in theatrical history, Joseph Kesselring’s tale about a columnist, his darling if deadly aunts, and his brothers—one comically cuckoo, the other criminally insane—was the blackest of black comedies. But its success was not so surprising; though some war-weary Americans escaped into the latest Technicolor musicals, other movie fans spent their free time whistling past the graveyard, cheered up by grimly funny films like Lubitsch’s To Be or Not to Be, George Marshall’s Murder He Says, and Chaplin’s cold-blooded post-war farce Monsieur Verdoux. 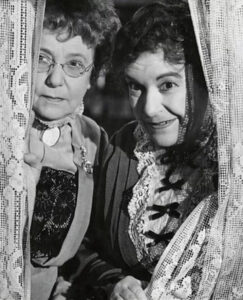 “Cold-blooded”, Arsenic and Old Lace is not. In fact, a common complaint is that the film is too high-strung. Capra telegraphs his screwball intentions in the opening scenes but his plan reaches lift off in Mortimer’s frenzied reactions to the homespun horrors at hand. It’s strange to consider any kind of controversy swirling around the debonair Grant—his comic chops were beyond reproach. But his feature-length conniption fit in Arsenic and Old Lace continues to divide the cognoscenti; some fans revel in the actor’s Tex Avery-like contortions, others are convinced he’d make Jim Carrey blush.

Grant’s loopy behavior does underline one of the movie’s better jokes, Mortimer is so screwy he makes the genuine crazies seem sane. That includes Josephine Hull and Ruth Adair as the apple pie aunts who send lonely old men to a happier place by poisoning them—they’re abetted by their brother Teddy who digs the graves for their latest victims. Played by John Alexander, Teddy believes he’s Theodore Roosevelt and those graves he’s digging are the Panama Canal. When the film was first broadcast on TV, Alexander’s full-throated battle cry of “charge” while bolting up the staircase instantly endeared him to a generation of children; Teddy is just another big kid. 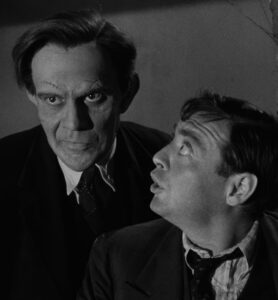 The odd man out in an already odd family is Mortimer’s brother Jonathan, a bloodthirsty boogey man who’s escaped from prison with the help of his plastic surgeon, Dr. Einstein. One must walk on eggshells around the hair-trigger Jonathan, and those in the know will never mention his resemblance to Boris Karloff—that wisecrack led to the death of at least one would-be wise guy. Karloff played Jonathan in the original stage production and one can only imagine the audience reaction to his fourth-wall breaking line, “He said I looked like Boris Karloff”—it must have rocked the house.

Raymond Massey assumes the role in Capra’s film and makeup man Perc Westmore works up a suitably ghoulish makeup for him— but Massey’s delivery of the “Karloff” line not only falls flat, it doesn’t make sense—he doesn’t look like Karloff, just perversely creepy. As Dr. Einstein, Peter Lorre looks exactly like Peter Lorre and he marches to his own drummer, refusing to be seduced by the chaotic atmosphere and resisting the urge to mug, his is the most assured—and funniest—performance in the film. 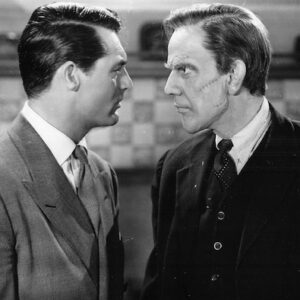 Capra displayed a real talent for horror in the “Pottersville” section of It’s a Wonderful Life but in Arsenic and Old Lace he opts for warm nostalgia and madcap horseplay. While making little effort to open up the action, Capra makes good use of art director Max Parker’s set—a stately piece of Victoriana that would suit the Addams Family—and the frantic pace at least avoids the stage bound theatrics that plague other Broadway adaptations. Especially nice are the studio exteriors of the house with their artificial trees, and paper mache leaves dotting a moonlit sky. A fitting backdrop for the Brewster home’s moonstruck inhabitants.

Photographed by Sol Polito in sumptuous black and white, Capra’s noirish laugh fest makes its Blu ray debut via The Criterion Collection. They’ve done a fine job capturing Polito’s work and, along with its superior picture quality, the disc features a new commentary by Charles Dennis, author of There’s a Body in the Window Seat!: The History of “Arsenic and Old Lace” which, among other dishy items, digs into the play’s real authors. Also included is a radio adaptation from 1952 starring Boris Karloff, and the film’s theatrical trailer. Inside the disc case is a new essay from Edinburgh professor David Cairns.