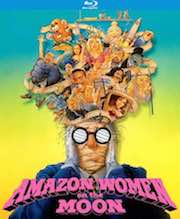 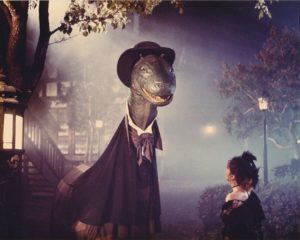 Mark Twain said “If you don’t like the weather in New England now, just wait a few minutes.” That applies just as well to 1987’s Amazon Women on the Moon, John Landis’s unofficial sequel to Kentucky Fried Movie and the bastard child of Joe Dante and Jon Davison’s The Movie Orgy. Like those back-handed tributes to the disreputable entertainments of our youth, Amazon Women is a smorgasbord of comedy skits, some served up just right and others pretty half-baked—but a judicious use of the remote control and patience rewards; overall the result is a good-natured vacation for the mind with three or four laugh-out-loud vaudeville sequences and a couple of bona-fide short-form classics. The new Blu ray from Kino Lorber raises the stakes in significant fashion, enhancing and even surpassing the theatrical experience with a boatload of extra footage, deleted scenes, and a new documentary on the making of the film.

Sandwiched between Landis’s two mega-hits, Three Amigos and Coming to America, Amazon Women had a wobbly beginning; the concept—a multi-part satire about the “vast wasteland” of television and the couch potatoes who live there—flummoxed Universal’s marketing department and Landis, the movie’s executive producer, confesses, “(the film) was not a first priority with me.” Already faced with less than vigorous studio support, the production nevertheless forged ahead with Landis bringing on two long-time writers for Johnny Carson, Michael Barrie and Jim Muholland, and surrounding himself with directors used to shooting from the hip; Robert K. Weiss, Carl Gottlieb and Dante (the fifth director was Peter Horton, who made his feature debut thanks to his then-wife, Michelle Pfeiffer, who co-stars with Horton in Landis’s sequence, Hospital). 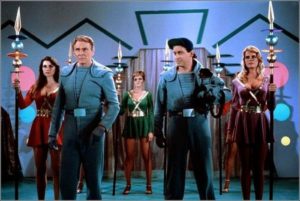 The central concept is a typical evening of channel-flipping fun in America, the main attraction being a broadcast of Weiss’s Amazon Women on the Moon, a parody of low rent science fiction films of the 50’s. Amazon Women is to Queen of Outer Space as Young Frankenstein was to Son of Frankenstein, a note for note parody of a well-loved, if musty, genre film. Steve Forrest is the tight-lipped incarnation of Eric Fleming’s stolid space commander in Queen and the statuesque B-movie star Sybil Danning fills in for the haughty Zsa Zsa Gabor. To complete the illusion of a low budget sci-if thriller, spaceships wobble, space babes jiggle and the actors, including Forrest, Robert Colbert and Joey Travolta, deftly impersonate non-actors. 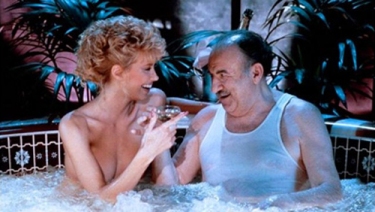 Weiss’s Murray in Videoland introduces the movie’s audience surrogate—Lou Jacobi as a TV loving schlemiel whose new-fangled remote sucks him into the TV screen clad only in his underwear. Thematically, the short is a continuation of Woody Allen’s Everything You Wanted to Know About Sex but Were Afraid to Ask in which Jacobi played a bumbling but enthusiastic transvestite who suffers exposure in increasingly humiliating fashion. Carrying on with that sad-sack persona, Lou appears Zelig-like throughout Amazon Women—he shows up alongside King Kong, Bambi and even Ronald Reagan—and he’s always more than welcome, particularly when he pops up after a segment lacking in laughs.

Amazon Women‘s alternately raunchy/infantile tone is announced in one of its first sequences, Gottlieb’s Pethouse Video, a day in the life of the always-naked Monique Gabrielle. Dante’s sequences are more aligned with the critiques of TV culture and he scores points even when the satire is more surreal than trenchant—particularly in his good-natured parody of the ABC show Ripley’s Believe it or Not called Bullshit or Not—a stoned fantasy reminiscent of Firesign Theater’s more esoteric mind-games (Firesign’s Phil Proctor appears in Weiss’s sketch, Silly Pâté). The segment deftly combines the legends of the Loch Ness monster and Jack the Ripper—two figures who continue to consume the imaginations of wide-eyed fairy-tale fans and conspiracy theorists. 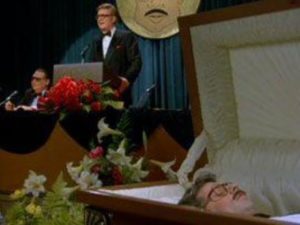 Dante takes the gloves off in Critics Corner, a straight-faced parody of Siskel and Ebert’s Sneak Previews in which two pundits sit nose to nose and pick apart the drab home life of one Harvey Pitnik as if his mere existence was a particularly lame movie plot. The curdled comedy of Critic’s Corner is but an appetizer for Dante’s blackly comic parody, Roast Your Loved One, in which the now-late Pitnik’s funeral service devolves into a Dean Martin-style roast with old school stand-bys Steve Allen, Charlie Callas and Henny Youngman at the dais and Dante mainstays Belinda Balaski as a widow with a hidden talent for one-liners and Robert Picardo as a combination funeral director and Vegas ringmaster. The late, great Rip Taylor shines and Dante makes sure to include a shot of the manic comedian’s confetti flakes fluttering gently into Pitnik’s coffin. 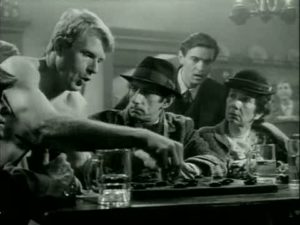 Amazon Women boasts two comic gems, each immaculate genre spoofs, Gottlieb’s Son of the Invisible Man and Dante’s Reckless Youth. Gottlieb’s segment stars Ed Begley Jr. as an exuberant fella convinced of his own invisibility—much of the humor lies in the slow motion reveal that this good natured soul is completely insane. He performs the Invisible One’s usual tricks, removing his clothes, lighting someone’s cigarette, all the while completely convinced that no one can actually see him (Begley, brave fellow, is starkers throughout the film). Fortunately he’s surrounded by understanding villagers on hand to humor him, in contrast to the usual Universal extras who can’t wait to get their mitts on torches and pitchforks. 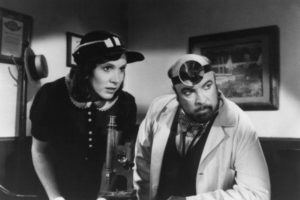 Dante’s Reckless Youth is the film’s clear winner but positioned, oddly, after the credits roll. It’s a superbly observed evocation of early 30’s “scare” films supposedly produced to warn unwitting teenagers about the dangers of promiscuity but in fact exploited their own racy subject matter (Cecil B. DeMille built an entire career on this hustle). Verisimilitude is paramount in a good parody and, like Son of the Invisible Man, all the signs of a film dragged out of mothballs are here—scratches, frame jumps and a weirdly disembodied soundtrack. Carrie Fisher pulls off the neat trick of inhabiting two roles; that of a B-movie starlet and the part she plays, “Mary Brown”—a wide-eyed not-so-innocent who winds up in the doctor’s office after a night of fun. The doctor who gives her the bad news is played by Paul Bartel, looking ever more deviant with each passing minute (he even wears eyeliner). The short is filmed, naturally, in black and white and Dante doesn’t miss a trick—every creaky cliche is in place and tweaked just enough to tip what should be a bleakly serious atmosphere into laugh-out-loud comedy.

Cinematographer Daniel Pearl performs like a champion—he photographed each segment and the experience (48 days spread over 32 locations) must have been daunting. Though perhaps best known as the DP for the original The Texas Chainsaw Massacre, he could be called King of the Music Videos because it seems he’s been behind the camera for every MTV hit under the sun including Michael Jackson, Bruce Springsteen, U2, and on and on. He does amazing work on Amazon Women, recreating the ambience of low rent science fiction movies, colorful pirate adventures, Universal monster movies and the distinctively decrepit look of pre-code quickies.

His work looks great on Kino’s new Blu ray, a disc loaded with outtakes and deleted scenes (courtesy of unofficial archivist Joe Dante) and a terrifically candid documentary on the making of the film with Landis, Dante and editor Marshall Harvey laying out the ups and downs of the production.