There’s one ironclad rule for mad scientist movies:  if you show a monstrous caged ape-creature in the first act, that ape-creature must absolutely break loose and wreak havoc before the end of Act III.  It makes no difference if the film is being made on Gower Gulch, or at Germany’s prestigious UfA Studios. Just ask George Zucco or John Carradine, they’ll set you straight. 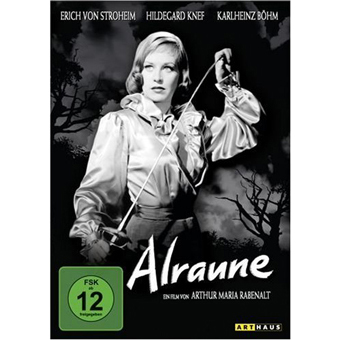 Note — this German-manufactured disc has no English track or subtitles.

Let’s go back to roughly 1911. German author Hanns Heinz Ewers was a genuine radical, a proto-national socialist. He was also adventurous. During WW1 he reportedly traveled to Mexico as a spy, to encourage Pancho Villa to attack the United States. Ewers’ horror writings followed in the footsteps of Edgar Allan Poe. Ewers wrote the screenplay for the first film version of The Student of Prague, which extends the idea of Poe’s doppelgänger tale William Wilson. Ewers’ strangest original tale Alraune is the second of three macabre stories featuring a young protagonist named Frank Braun. It’s a mix of perverse psychosexual ideas half invented and half pulled from mythology. According to (dirty) legend, the plant called the Mandrake Root, or the Mandragore, grows only under scaffolds and is born of the semen of hanged men. Alraune blended repressive religious ideas with misogynistic superstition — and new ‘social engineering’ ideas of Eugenics.

In an era when anything to do with reproduction was taboo, Ewers’ shocking book was certainly considered to be pornography. Yet several German versions were filmed. Along with his other writings, Alraune was for a while suppressed by the Nazis, a ban that was later rescinded.  Ewers’ present lack of literary popularity can be explained by the fact that he was personally commissioned by Adolf Hitler to write a biography of Horst Wessel. 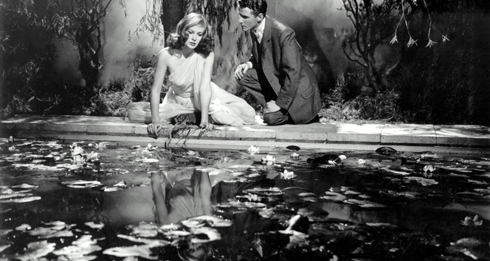 The classic 1928 silent film version by Henrik Galeen stars Brigitte Helm; she repeated the role for a talkie remake in 1930. The version of Alraune reviewed here is from postwar West Germany, 1952. It’s one of the last acting jobs for the famed silent film director Erich von Stroheim.

It is 1905. Banished from medical school for his perverse ideas, Professor Jacob ten Brinken (Erich von Stroheim) is also a crook in business, having conspired in various lucrative schemes with an ex-madam, ‘Princess’ Wolkonska (Trude Hesterberg). The Professor also has the help of a sinister confederate, Doctor Mohn (Harry Halm). Ten Brinken’s somewhat arrogant nephew, Frank Braun (Karl Böhm of Peeping Tom) borrows school money on the basis that he’s the Professor’s only heir. But Ten Brinken claims a closer relation: the mysterious Alraune (Hildegarde Knef of The Murderers Are Among Us). Frank, his student friend Count Gerodingen (Harry Meyen) and the artist Wolf Goutram (Rolf Henniger) are all charmed by the beautiful young woman they discover on the Brinken estate. Alraune also encourages the adoration of Doctor Mohn and the coachman Mathieu (Hans Cossy), but shows no sign of returning any particular suitor’s affection. When the Princess’s impressionable daughter Olga (Julia Koschka) becomes romantically linked with Frank, Alraune motivates her to try to kill herself. Alraune finds a mineral spring with the aid of a Mandrake Root that she considers her magic charm. Ten Brinken and The Princess immediately exploit the spring as having healing properties. Alraune ’causes’ the various men to fight over her, or to do foolish things to impress her. Several deaths and one fraud scandal later, Ten Brinken tells Alraune why she is loved but cannot love or shed tears: he created her through artificial insemination, using the semen of a double murderer and the egg from a prostitute procured by The Princess. The professor claims that his ‘daughter’ is a godless and unnatural ‘thing’ without a soul. Or is he only saying that because of his own incestuous desire for her?

The 1928 silent Alraune looks splendid in still photos. The silent siren Brigitte Helm sounds ideal for the lead role. The ‘life without soul’ idea relates the story to The Golem and Frankenstein. It now also seems obvious that Thea von Harbou’s story for Fritz Lang’s Metropolis encapsulates Ewers’ idea wholesale — the artificial robot Maria is equally soul-challenged, and therefore Evil with a capital “E.” Rich men kill each other in vain attempts to win the ‘False Maria.’  I’ll have to run that idea past Aitam Bar-sagi.

Humanistically speaking, this really is a rotten story idea, summing up misogynistic themes through the ages. Women are sexual seducers, therefore Evil; thus we call sexually aggressive women Black Widows, Femme Fatales, Vamps. Twenty years before Alraune, Frank Wedekind wrote a play called Pandora’s Box about a heartless dancer name Lulu, a ‘primal animal’ who spreads havoc in high society, and eventually falls into prostitution. Although the play sees Lulu destroying men, she’s really only the catalyst for their greed and desire; it transcends the genre. 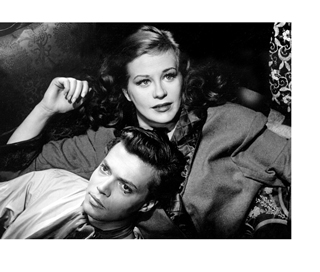 This Alraune from 1952 does not have a high reputation, but the curious seek it out to see the legendary Erich von Stroheim. Made at the end of his career, it’s his first film in Germany, in the German language. A Stroheim biographer said that the silent director showed up every morning having re-written each day’s scenes and asking that his pages be substituted. We’d think that that can’t be so, or the finished show would surely have more of an edge.

Director Arthur Maria Rabenault directs the letter of the script but doesn’t seem to have been told that it’s basically a horror story. The best material establishes Alraune as a mystery woman, found sitting by a reflecting pond like a fairy nymph, posing for a painting, besting an opponent with a fencing foil, riding a horse. When Hildegarde Knef tried for an American career, she was unfairly labeled an inexpressive ice queen. Yet here she fails to convey the malice of Alraune’s acts, and it must be the fault of the direction. Alraune clearly knows what she’s doing. She takes her various conquests for granted, and ignores their suffering. Alraune was caught reading an obscene book in a convent, but that happens off-screen. Knef’s Alraune has no malice. It’s almost as if director Rabenault wants to make everything ‘nice.’ Alraune and Olga are together in a bedroom, a scene so beautifully shot that we expect Alraune’s evil to include Lesbianism. She instead is rather vacuous, even as she sets up Olga for a suicide. 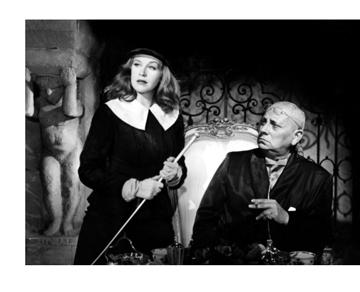 Von Stroheim’s Ten Brinken mostly observes from the sidelines. He becomes involved only when  he thinks he’s going to lose Alraune does he deliver the big news of her horrible origin.

Stroheim’s best moment comes up front. When the Mother Superior’s complains about Alraune’s ‘obscene influence,’ he responds with a sly smirk, as if to say, ‘That’s my girl.’ Of course, when Stroheim flexes the tiniest face muscle, perverse thoughts seem to radiate from his eyes. But his Ten Brinken doesn’t nibble toes or drool on anybody.

For the English language version Stroheim was badly dubbed by another actor. This is perhaps why Variety described his acting approach as ‘comic malevolence.’ Yet the Professor is dead serious. Ten Brinken says he used a criminal and a prostitute for his obscene experiment because “criminal characteristics are easier to find, and more interesting anyway.” Frank is shocked to learn that he’s in love with ‘a crime against nature.’ The story reinforces a socially mandated Original Sin: having a bad heritage is a personal offense, and common undesirables are  untouchable.  We’re told that modern artificial insemination was first performed in the 1880s, and of course now it is a common practice. Women set aside preserved eggs to await the right time to have children.

Even in 1952, stirring this pot of superstitious rot was culturally retrograde. With anti-science irrationality now making a big comeback and fundamentalists all but burning witches again, I wouldn’t be surprised to see the ‘Alraune’ argument revived. Ewers’ warped fascist heritage is everywhere. This is what makes this minor movie relevant today. 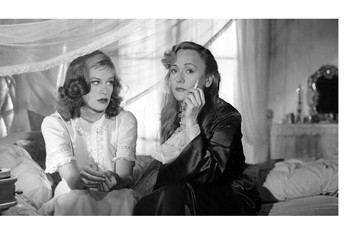 Rabenault’s movie is fairly well photographed, with sets designed by Robert Herlth of 1924’s The Last Laugh. Two ideas are woefully undeveloped. Alraune’s Mandrake Root looks like a sweet potato twisted into the vague shape of a human figure. As she considers it significant before she knows her origin, we don’t know where it came from. We also don’t know why she suddenly decides she can find water with it. Secondly, in an early scene we see a cage in Ten Brinken’s laboratory containing a monster ape-man, a scrawny guy who perhaps figures in another of the Professor’s perverse experiments — has he discovered the missing link proving evolution? It’s another echo of Poe, from Murders in the Rue Morgue. Ten Brinken is technically a mad doctor, and we all know that mad doctors habitually imprison monster apes, which always break loose and go on the rampage. It seems a terrible cheat that the monkey-man doesn’t amount to anything. If Ten Brinken were Doctor Moreau, he’d be trying to get Alraune and the monkey man together on a date.

(spoiler.) Instead, the story takes a turn that overturns what little logic has been built up. Alraune has indirectly inspired several deaths and one near-suicide. Her governess (beautiful Denise Vernac) is dismissed after being framed for theft. But Alraune suddenly sheds tears of sadness. She proclaims that she’s in love with Frank, and will go away with him. Ten Brinken’s incestuous jealousy immediately rises to the surface: he’s just as gone on the girl as were the other fools.

Hildegarde Knef sings two songs out by the reflecting pool, but this is no musical. Although the movie promises violent action, two characters die off-screen, robbing the film of what should be important content. The beautiful Ms.Knef looks terrific in the still photos, but we want to go back and tell her to drop the costume-drama smiles and turn on the Evil. 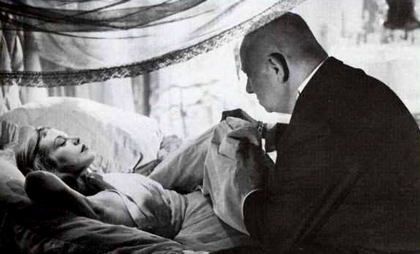 Arthaus’s Region 2 PAL DVD of Alraune is a good-looking transfer of this mostly attractive movie. The interiors are impressive, as is Ten Brinken’s classical-looking reflecting pool. Only some storm sequences and action scenes look weak. But unless you understand German, don’t rush off to buy this on Amazon.de. There is no English language track or subtitle option.

The DVD comes with a couple of old interviews that look as if they were sourced from VHS, plus some trailers for Karl Böhm movies. This was Böhm’s second picture, and he had quite a run as young leading man opposite beauties like Romy Schneider. 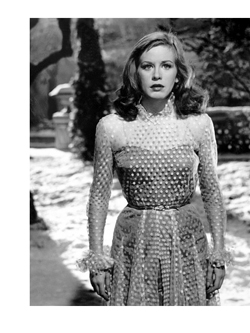 Seeing this version of Alraune gives me the idea that its basis has been subsumed into many movies, and not just the generic idea that heartless women justify the urge to ‘put the blame on Mame.’ Direct variations on the theme show up in other genres — killer babes are the monsters, and we watch to see them get their comeuppance. Edgar G. Ulmer’s dark The Strange Woman gives us Hedy Lamarr as a social climber who doesn’t stop at killing; it features a similar accident with a horse and wagon. John Krish’s tidy science fiction film The Unearthly Stranger gives us an alien beauty (Gabriela Licudi) who may be the spearhead for an invasion from space. Like Alraune, she falls in love, gains the ability to shed human tears, and changes her loyalty.

The sales page for the Alraune disc contains a long German Trailer, should one want to get better idea of what this strange cultural artifact looks like. Knef sings, and we can see both the Monkey Man and the Mandragore toy man.