Big star Gary Cooper kids his screen image as an infallible hero in a western that almost plays as a screwball comedy, complete with the ultimate grouchy sidekick, William Demarest. Loretta Young’s attraction to Coop’s goofy ‘bronc stomper’ seem glowingly authentic. The jokes are funny, and the sentiment feels real, right up to the unexpectedly violent ending. . . for 1945, that is. 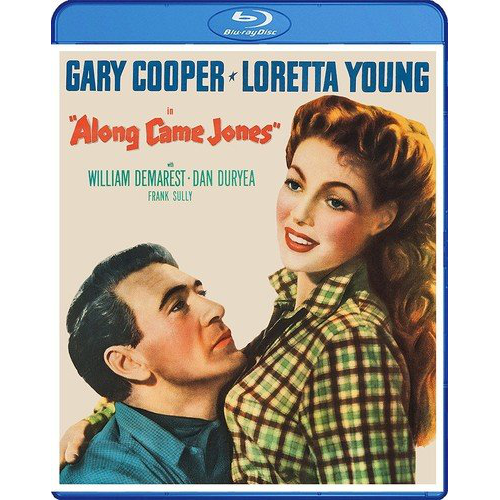 At the end of WW2 came forth a burst of new independent film production companies headed by actors and directors. A number of big stars were trying to find ways to participate in the enormous profits they earned for the moguls. James Cagney had tried and mostly failed in the decade just past, but more top stars were incorporating themselves and teaming up with agents or managers. Most were hurt by complicated tax laws that favored big companies. A group of top directors led by Frank Capra formed Liberty Pictures, only to find that the existing system almost guaranteed that profits would vanish.

Gary Cooper went the self-producing route early, for just one movie. He gathered some trusted talent together and helped them cook up a perfect Western vehicle to maximize his box office appeal. Cooper was often caricatured as a cowpoke so laconic that his vocabulary was limited to ‘yup’ and ‘nope.’ Released through RKO, ‘Cinema Artists” lighthearted Along Came Jones is concocted to please the Cooper fans, a mix of comedy, sentiment, romance and a little fancy gunplay. The basic joke is that Cooper’s hero, although dependably honest, upright and tolerant, has absolutely no aptitude whatsoever with a shootin’ iron. He fumbles his quick-draws so badly, his gun ends up tossed across the room. 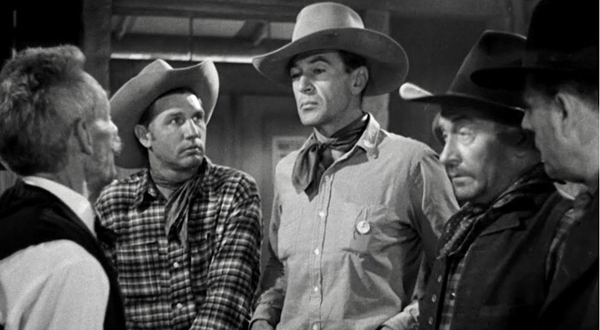 Lost cowpoke Melody Jones (Cooper) and his older sidekick George Fury (William Demarest) wander into the little town of Payneville, where the meek, unassuming Melody is mistaken for Monte Jarrad, a ruthless criminal responsible for a rash of robberies and murders. The Payneville locals cower when Melody comes near, which confuses him and confounds George until local ranch girl Cherry de Longpre (Loretta Young) comes to their assistance. Cherry is actually the girlfriend of the outlaw Jarrad (Dan Duryea), who is wounded and hiding back at her ranch house. Jealous and surly, Monte doesn’t believe Cherry when she insists that she’s using Melody as a decoy to help the outlaw escape. More mistaken identities come to light as Melody, Cherry and George try to avoid a posse, a stage express agent (Willard Robertson) and a couple of townspeople who aided Monte in the robbery, and want their cut.

Cooper had some big talent backing him up. Veteran director Stuart Heisler who had worked with the star on Goldwyn’s The Cowboy and the Lady, but the successful screenwriter Nunnally Johnson is given possessory credit on the film. Johnson had written Cooper’s previous comedy Casanova Brown; he worked from a book by Alan Le May, who had writing credits on two of Cooper’s pictures for Cecil B. DeMille. 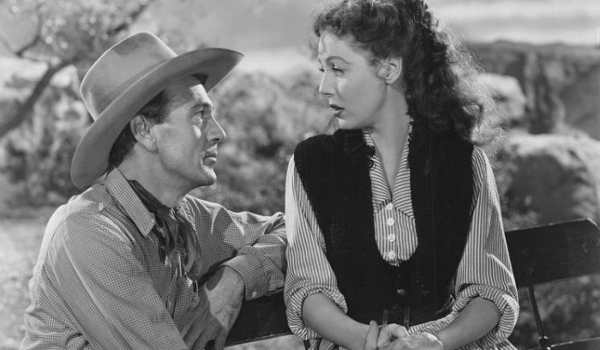 Along Came Jones’ first act is almost as funny as a Preston Sturges movie. Cooper’s Melody is a somewhat absent-minded softie who amuses himself on the trail by singing silly songs, or better, one song with a hundred silly verses. He’s hopeless with firearms, yet likes to feel respected in bar rooms. His posing as a tough guy disgusts William Demarest’s George. While everyone in town shudders and retreats from Melody, George can’t understand why the boys in the bar are giving him the laughingstock streatment. He didn’t see the official handbills posted all over, that proclaim:

MONTE JARRAD
Tall and skinny, mean tempered and
extra fast with gun. Travels with half-wit
uncle called Uncle Roscoe something.
$1000 REWARD DEAD OR ALIVELoretta Young’s Cherry de Longpre is given an excellent introduction. Melody defends Cherry’s honor on a street corner, and then gives her a kiss; her delighted reaction is quite a sight. Although Melody can’t hit the broad side of a barn with his pistol, he sticks to the proven Law of the Hollywood West: the hero might be bested in a gunfight, but is always good with his fists.

The more pragmatic George is always ready with useful advice: “You always want to shoot them in their right eye. It spoils their aim.” 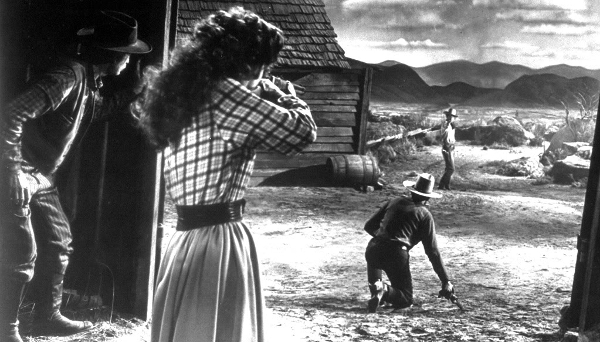 The film’s first two acts are nearly flawless. The coy repartee between Cherry and Melody is charming, and Dan Duryea’s bad guy is appropriately mean-spirited. Demarest’s sour-faced pal is always off to one side, providing top quality griping and second-guessing. In the third act Along Came Jones drops most of its humor for a fairly standard set of standoffs, reversals and double crosses. It’s all fairly well plotted, but we’d rather go back to the previous jolly tone. The final shootout is pretty tense, with the lovable heroes taking hits and others dropping like flies. Our neatly sketched comic characters seem a little out of place in a conclusion that’s not of a piece with the movie’s original, charming first half. Cooper’s picture misses classic status by dragging a bit in the home stretch.

We should probably be grateful that Along Came Jones doesn’t become a Bob Hope- like farce. Just before the finish we learn that Cherry shoots as well as Annie Oakley. A full-on comedy western with less of a pedigree would make Melody’s shooting skills bloom at the last minute by some silly means, like reading a book or drinking some of Pop de Longpre’s corn liquor. Critics in 1945 thought Along Came Jones would be surefire box office bait. If it didn’t make money, blame the distributors and bean counters. 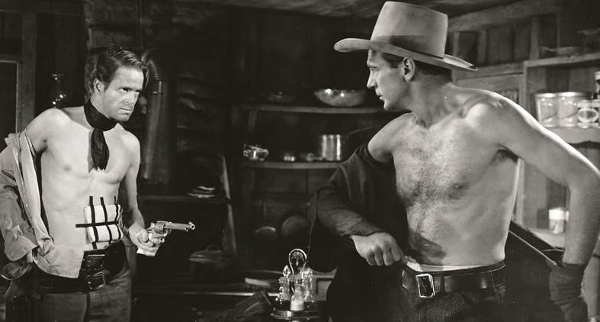 Although Gary Cooper gives his ‘cute’ act a solid workout, he doesn’t overdo the boyishly insecure hemming and hawing that he would routinely indulge in later pictures. Loretta Young generates all the romantic chemistry, and is luscious and vibrant at all times. It’s cute that her Cherry remains basically impetuous and innocent, despite being a robber’s moll who continues to manipulate Melody even after she’s fallen for him. These reversals give William Demarest plenty of opportunities to vent his disgust with the female sex — the comic triangle is like a perpetual motion amusement machine.

Poor Dan Duryea is left out of the fun. Never in on the joke, the bandit Monte Jarrad is a sour apple seething with dark thoughts. Part of his plan to escape is to change clothes with Melody and then blow his face off, and it looks as if he’s looking forward to the nasty business. BTW, the still just above doesn’t represent the feature, where we don’t really see the actors with their shirts off. Might someone have that that it looked too perverse?

Although he’s effective here, Duryea’s villainy is more entertaining in later pictures. His frontier rat in Winchester ’73 gets all the funniest lines, leaving hero James Stewart to play a largely humorless straight man. 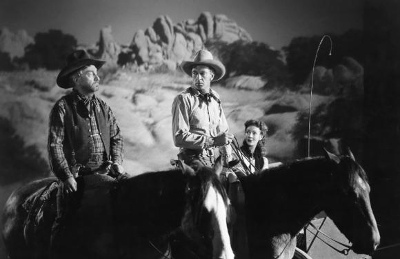 Along Came Jones was bankrolled by William Goetz’s International Pictures, which would a year later merge with Universal to become Universal-International. As a production the film relies on old studio techniques. Many exteriors are filmed on interior stages with giant cycloramic backgrounds. Riding scenes with dialogue are accomplished economically with distractingly fake rear-projection. But it is said that Cooper built an entire western town set on the Iverson Ranch just for the film. The standing set was in constant use for twenty years, until western production tapered off and the Simi Valley Freeway was built. As the notorious Spahn Ranch was part of the Iverson property, try to imagine Charles Manson’s family members rehearsing creepy-crawly tactics around the buildings where Gary Cooper and Loretta Young once made eyes at each other. 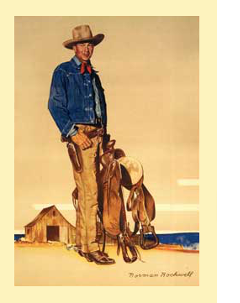 ClassicFlix’s Blu-ray of Along Came Jones is licensed from MGM, with a much-touted new 4K scan and restoration. The source carries a ‘Independent Releasing Corp.’ logo up front, indicating that the element is from a 1953 re-release. The sound and picture are so snappy that one wouldn’t know that ClassicFlix had to work with elements in poor shape, as a pair of opening disclaimer cards tell us. The movie has always looked pretty good, with some isolated damage here and there; when I was at MGM I just noticed some random scratches.

ClassicFlix’s digital fix-up job corrects most of the blemishes. The cleanup of white dirt bits, etc., is very good, as can be seen on a restoration comparison provided. As all the work was done to create a video master, it needs to be said that this isn’t a film restoration.

Working back at MGM, I didn’t realize that Along Came Jones wasn’t part of the official United Artists library. I included a brief clip from it in a comedy UA western montage I edited. After a quick succession of fast-draws from Steve McQueen to Clint Eastwood, Loretta Young pops up sputtering the words, “You two-bit butterfingered gun juggler!” It was only 1994 but I don’t think any of the young women running the Home Video marketing had ever heard of Loretta Young.

Confirmed western fans take note: this film’s climactic confrontation is almost identical to the key three-way gun-down scene in John Ford’s The Man Who Shot Liberty Valance, with Cherry taking the place of John Wayne’s Tom Doniphon. As George Fury would likely say, ‘When the legend becomes fact, let the rancher lady do the shooting.’