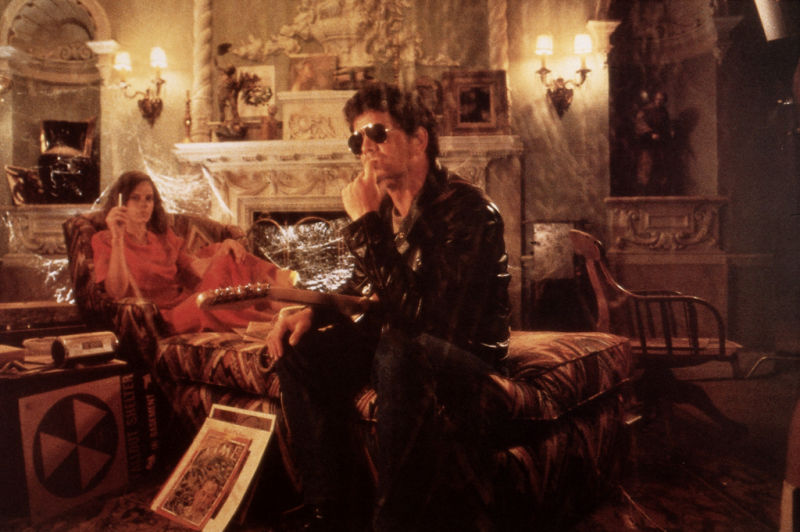 Allan Arkush’s criminally underseen, undervalued, and unavailable film Get Crazy is one of the few films to ever feature rock’n’roll legend Lou Reed in an honest-to-goodness acting role, that of a Dylan-esque folk musician. As such, we thought, reaching out to Allan for some Lou Reed memories would be a good thing to do on the event of Reed’s unfortunate death*. Reed, by all accounts, could be a gruff and insensitive person in interviews (that is, ‘a real asshole’)**. I don’t think this story shows that off at all.

I vividly remember this conversation with Lou reed on the set of Get Crazy in 1982. I asked Lou when it first struck him that he was indeed “Lou Reed”. He told me that starting with “Transformer ” 1972, people came up to him on the street all the time  and shared drug experiences or shared stories of being on the fringe of societal standards of behavior and how his music had inspired them to these extremes. Hearing those personal tales of decadence just made him uncomfortable and he did not like being the “Lou Reed” connection for only those types of  experiences.

He told me a story of when he was most happy being “Lou Reed”: it was in Manny’s Music Store (a very famous place where the guitarist  Mike Bloomfield bought the Fender he used on  “Like a Rolling Stone” on his way to the session,  and where countless other  amps,  guitars, and basses that mark the history of Rock were purchased).

Lou was just hanging out, buying some new guitar strings when he noticed that a young teen and his Dad were shopping for his first Fender guitar. The kid was 13 or so & practically shaking with excitement as he’d just put on the Telecaster and was being plugged in, a very serious part of the ritual of buying a guitar at Manny’s.

Lou was wondering what this geeked out teen would play to test out his momentous purchase. After some tuning and a squall of feedback from being turned up to 11, the boy  launched into the opening chords to “Sweet Jane”, the riff turned everyone’s head in the store.

In his typical dry and penetrating manner, Lou looked at  me: “That’s when I said to myself, Hey I’m Lou Reed!”

*Also because the more Lou Reed memories and remembrances we can get out there, the less I have to see dopes on Twitter confusing Lou Reed for Lou Bega.