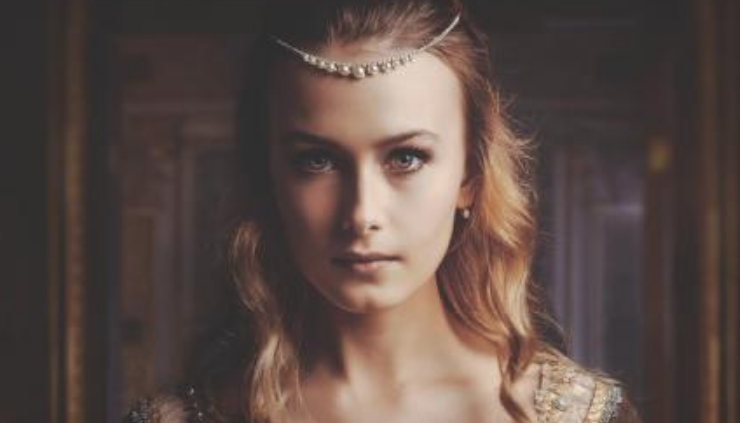 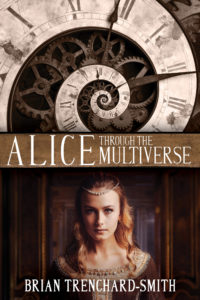 My first novel “ALICE THROUGH THE MULTIVERSE”  had a lengthy evolution. I am a film maker by trade, 42 crimes against Cinema, and counting. For me writing is an integral part of directing.   Here’s an account of this particular creative journey.

I often have wild dreams. One such, in 2003, was the genesis of Alice’s story. All I could remember next morning were a few images. A riot overwhelms a medieval execution… A young girl flees through the forest in a blinding thunderstorm… The girl faints… She wakes up in a 21st Century psychiatric institution… That’s all I could remember.  Strange. If dreams are the subconscious putting out the trash, what tortured region of my inner being did this come from?  Or was it just psychic screen grabs evoking movies I’ve seen, or maybe a movie I would want to see?   I groggily jotted down what I could remember, then ruminated on the concept during my then daily swims in the pool at UCLA , where my wife was doing doctoral studies.

As I lapped, for sometimes up to an hour, characters and plot twists would come to me. Is the girl the daughter of the executioner, perhaps? Does the psych hospital have a deadly agenda?  I would scribble bullet points on my hand as soon as I reached the locker room. The story developed its own momentum and a screenplay poured out of me, entitled The Executioner’s Daughter.  Two girls, five centuries apart, swap lives. They are zapped back and forth without warning, plunged into frightening conspiracies in both time zones. Are they skipping across parallel strands of the Multiverse? Or is Alice insane? It was a wacky genre cocktail with paranormal trimmings, part Medieval Palace drama, part Jason Bourne spy thriller.

The script was optioned twice for good money, but was never able to attract a star big enough to trigger the finance the project required. I relinquished the director’s chair to a talented German film maker with more sizzle at studios than I had. Christian Alvart, was fresh off a hit thriller Antibodies, and soon to direct Renee Zellweger in Case 39. I saw his director’s cut. It’s a good Bad Seed Demon movie, but Paramount at that time did not know how to release horror, and squandered its potential. It’s a pity because Christian has a strong visual style and would have done a great job on my script. These days he makes back to back movies and miniseries in Europe. But we could not get any of the rising female stars du jour to sign on to an independent Euro-shoot movie without a studio deal. And we could not get a studio deal without a star’s LOI. The script languished through 11 further drafts, trying to please different distributors till the option expired.

I went on to direct several more films, but Alice’s story still gnawed at my liver. So a few years ago I adapted the screenplay as a novel, something I had never done before, but I found the medium liberating. I could explore the character’s thoughts, make wry comments on the culture and politics in both centuries, and give the reader two hundred and fifty pages of blood and thunder amid time twisting paranormal thrills! What’s not to like? No publisher was interested. Only one bothered to reply. Again I put it aside. Then 18 months ago I said dammit – I’ll self publish. During the novelization process, the environmental and corporate conspiracy themes in the script grew stronger. It became a chase thriller/parallel universe/ ripping yarn sprinkled with nuggets of agit prop. A fun ride was developing a soul.

Because there was already a book on the market titled The Executioner’s Daughter (no similarity), I published the novel as The Headsman’s Daughter. My cover targeted action thriller readers combining the eyes of a mysterious woman, an axe, a gun and a pool of blood. There were 2 versions of the artwork. I chose the one with less gore for the cover.  I used the other to attract horror fans on Facebook. 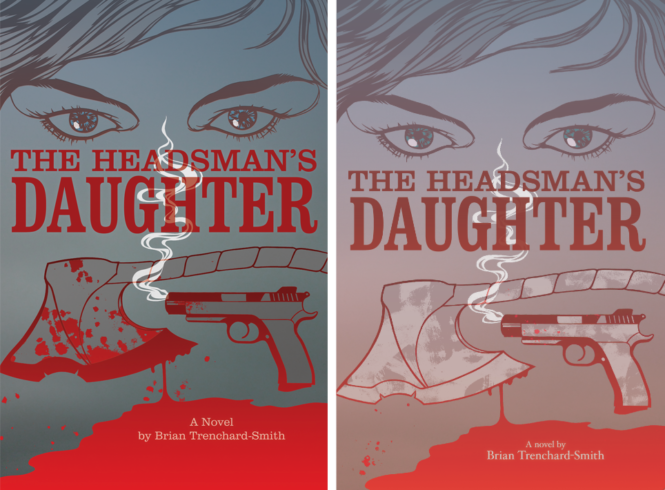 I think some female and some sophisticated fiction readers who might have been drawn to the story were put off by the implied “penny dreadful “illustration. Nonetheless 22 excellent reviews appeared on Amazon. When so many people asked me what a “headsman” was, I realized the title was not a grabber. I needed one that  would better attract science fiction, time travel, and particularly the Young Adult readership, where the progressive ideas might take root. Alice Through The Multiverse popped into my head one day. Thank you, Lewis Carroll. Then I got a great cover designer Kevin G. Summers to do the artwork, which I love.

But something was still gnawing at my liver. I read the book again. There was a loose end that I hadn’t thought important enough to resolve, which, on reflection, slightly soured the satisfaction at the end that I wanted the reader to experience.  So I added three more chapters, picking up from where the original ended. Then I consulted my spouse. Always a good idea.  A new twist came to us that reinforces the underlying themes. The last three pages will certainly spark some debate. The book has more heft now. After 15 years my fever dream finally found its purpose.  How readers will react to this second edition – in today’s self publishing universe of 4 million books – remains to be seen. Here’s the trailer and the link to YouTube. But I’m happy with Alice now. If she plays like a movie in your head, that’s the idea. Even a streaming series. Hey, a man can dream…

Brian Trenchard-Smith is an Anglo-Australian film and television director, producer, and writer, with a reputation for large scale movies on small scale budgets. Quentin Tarantino referred to him in Entertainment Weekly as his “favorite obscure director.” His early work is featured in Not Quite Hollywood, an award-winning documentary released by Magnolia in August 2009.

Born in England, where his Australian father was in the RAF, Trenchard-Smith attended UK’s prestigious Wellington College, where he neglected studies in favor of acting and making short films, before migrating to Australia. He started as a news film editor, then graduated to network promos before he became one of a group of young people that, as he recalls, “pushed, shoved, lobbied and bullied the government into introducing investment for Australian made films.” He persuaded Australia’s largest distribution-exhibition circuit at the time, the Greater Union Theater Organization, to form an in-house production company that he would run. The company made three successful films in a row, and his career was underway. In parallel careers, he was also founding editor of Australia’s quarterly Movie magazine for 6 years, and has made over 100 trailers for other directors in Australia, Europe, and America.

Among early successes among his 41 titles were The Man From Hong Kong, a wry James Bond/Chop Sockey cocktail, the Vietnam battle movie Siege Of Firebase Gloria, and the futuristic satire Dead End Drive-In, a particular Tarantino favorite. BMX Bandits, showcasing a 15-year old Nicole Kidman, won the Prix Chouette in Europe, as Best Saturday Matinee Movie. Miramax’s The Quest/Frog Dreaming, starring ET’s Henry Thomas, now on Blu Ray, won a prize at Montreal’s Children’s Film Festival. He has directed 43 episodes of television series as diverse as Silk Stalkings, Time Trax, Five Mile Creek, The Others, Flipper, Chemistry, and the Showtime docu-drama DC 9/11: Time Of Crisis, one of five movies he made for the network.

Among Trenchard-Smith’s recent films are Long Lost Son, starring Gabrielle Anwar and Chace Crawford for Lifetime, and the family drama disaster movie Arctic Blast, starring Michael Shanks and Bruce Davison, which premiered on Spanish television as the number 1 movie with a 15.6 market share, and more than 2.5 million viewers. In Dublin he shot The Cabin, a rom-com starring Lea Thompson for the Hallmark Channel. He produced and directed Absolute Deception, a thriller starring Academy Award Winner Cuba Gooding Jr. Recently released through Image is Drive Hard, an offbeat action comedy with John Cusack as the bank robber and Thomas Jane as his reluctant driver.

His body of work has been honored at the Paris Cinema, Karlovy Vary, Melbourne, Brisbane and Toronto Film Festivals. In 2016 he received a Lifetime Achievement Award from the Fantaspoa International Fantastic Film Festival. The National Film and Sound Archive of Australia recently hosted a three city retrospective of his films. He is a member of the Masters of Horror Circle, and is a contributing guru to Trailers From Hell. He is married to Byzantine historian Dr. Margaret Trenchard-Smith, and lives in Portland, Oregon.