This unique proto-slasher is not a rip-off of The Exorcist and for my taste is more meaningful, despite associating innocent children with horrible killings and religious repression. Director Alfred Sole uses these edgy elements to whip up an involving mystery, and a committed cast lifts it high above the exploitation gutter. Great extras, especially a commentary by Richard Harland Smith. 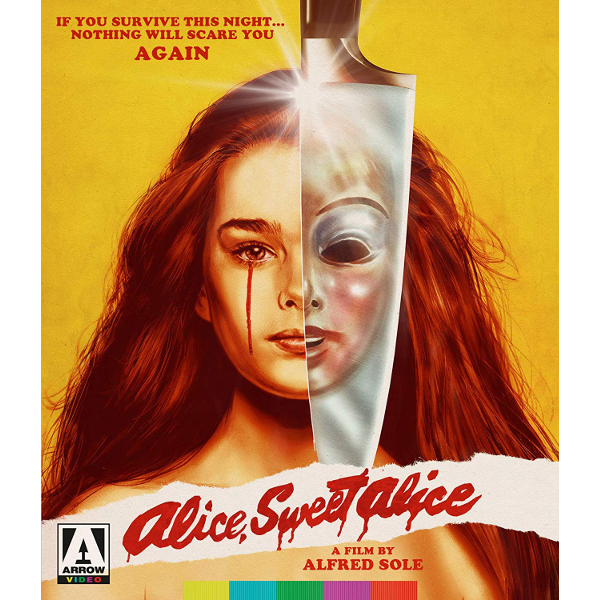 Back in the 1970s horror films didn’t always get a fair critical reception, so it was difficult to know which ones were the winners. Alice, Sweet Alice is an accomplished post- Exorcist shocker about mayhem in a dysfunctional Catholic family. Although the opening image is a little girl in a First Communion dress holding a dagger, the film is reasonably tasteful. The violence follows no genre cookie cutter pattern but instead follow logically as a result of sin and repression. Director Alfred Sole knows how to generate suspense while developing interesting, unusual characters.

A horrible murder ruins the First Communion ceremony run by Father Tom (Rudolph Willrich) and devastates the unhappy Spages family of Paterson, New Jersey. Catherine Spages (Linda Miller) and her surviving daughter Alice (Paula Sheppard) live in a rotting apartment building run by the obese Mr. Alphonso (Alphonso DeNoble); in the wake of the killing, Alice’s unpleasant Aunt Annie (Jane Lowry) moves in and makes everyone miserable. Catherine’s ex-husband Dom (Niles McMaster) arrives to help straighten things out because the troubled, precocious Alice is suspected of the crime. Annie is attacked on the stairway by someone wearing Alice’s scary mask and yellow raincoat, which results in Alice being remanded to psychiatric observation under the caring Dr. Whitman (Louisa Horton). Almost everyone is convinced that Alice is the killer except her mother, who is plagued by prank phone calls … Movies about kids in outrageous jeopardy proliferated after William Friedkin’s sensational hit The Exorcist, and not just foreign rip-offs: The Little Girl Who Lives Down The Lane, The Omen and the confused Audrey Rose. Alice, Sweet Alice seemingly borrows its central image of a tiny knife-wielding attacker in a plastic raincoat from Don’t Look Now but can pride itself on on not being just another exorcism clone. Rosemary Ritvo and Alfred Sole’s script instead churns up a sordid tale that would appear to make the Catholic Church responsible for all human ills. The film insists that the Church’s repression of human sexuality creates and encourages all kinds of psychological problems driven by fear and frustration. This issue dominates the characters, most of whom suffer from feelings of guilt. The parents are divorced, yet are still attracted to each another. The mother inadvertently favors one daughter over the other, setting into motion what looks like a female Cain & Abel situation. With the men either missing (father) or emasculated (Uncle Jim, played by Gary Allen), only the ‘sexless’ Father Tom remains, and he has become an emotional focus for all of the women. All trust and adore him: Catherine, young Karen (Brooke Shields) and his housekeeper Mrs. Tredoni (Mildred Clinton).

The story takes place in the early 1960s, and the Jackie Kennedy look is in vogue. The choice of period can only be to emphasize that a Catholic is in the White House, which indicates that the writers of Alice, Sweet Alice are either sincerely bitter about the Church or are amusing themselves with a complex anti-Catholic theme. Director Sole keeps the drama on its feet with sharp characters and situations we care about. Willful rebel Alice retreats to a secret hideout in the basement and likes to scare people with her mask. Repression is everywhere. Family communication breaks down whenever sex is involved. Mother assumes that Alice is still an innocent, and must be told by a psychologist that Alice is menstruating. Catherine also doesn’t know that Alice carries on a teasing, insulting discourse with the obese Mr. Alphonso, a potential child molester who lives in the apartment downstairs. Parental guilt and recriminations create children with deep problems. Catherine was unmarried when she became pregnant with Alice, and for some reason the younger, more obedient Karen has received the bulk of her motherly love. The absent father Dom is also gulity, especially when a phone call from his wife catches him kissing Catherine. Alice both needs her parents and resents them. Adding fuel to the fire is the harpy-like Aunt Annie, who orders everyone about and escalates every issue into a big problem.

(spoilers from here on in; there’s no other way)

As it turns out, a super-repressive maniac is responsible for everything. The killer sees Catherine Spages as an unclean whore who must be punished. Even in this odd horror film the blame is assigned to women. The men in the family never get a chance to solve anything, and the police stop looking for a culprit soon after seeing Alice’s disturbing school records.

Director Sole does well with his cast and script and his direction never shows haste or undue economizing. Angles are expressive and characters’ emotions well-covered. The various murders are stylish but not fetishized; the scary mask and Alice’s creepy two-faced doll achieve the intended effect. Sole is apparently a major fan of Alfred Hitchcock, and Stephen Lawrence’s good music often channels Bernard Herrmann’s Psycho score.

Some of the performers’ abilities are limited but most of the New York-based cast comes off well, especially young Paula Sheppard, who looks a bit like an underage Karen Allen. Her only other IMDB credit is 1982’s Liquid Sky, where she plays an even more disturbing character. Paula was 19 during filming but is completely convincing as a 12 year-old The impressive Mildred Clinton was Al Pacino’s mother in Serpico, and had a part in the pre- Sound of MusicGerman movie about the Von Trapp Family. The famous Lillian Roth has a small part as a morgue pathologist; it’s a kick to think she’s the same lady who parachuted from a wild party held in a dirigible in the bizarre pre-Code comedy Madam Satan.

The original on-screen title Communion makes the film seem even more anti-Catholic. The better-known replacement Alice, Sweet Alice tips us off that we’re watching a horror film, because it sounds similar to a famed Bette Davis feature. For me, Alfred Sole’s film works because the character relationships and interactions are compelling; anybody with complicated family issues can identify with Alice’s mother and father, trying to react properly under awful circumstances. The story has too much integrity to be merely a ‘hate Catholics’ tirade, and the violence is too personal to make us feel we’re watching a by-the-numbers slasher picture. Besides, the show predates Halloween by two years.

Arrow Video’s Blu-ray of Alice, Sweet Alice is a wonderful, new 2K restoration; I first reviewed the show in 2007 and lamented that what was available back then didn’t look so hot. In this case the beautiful widescreen image really helps the show take the leap from Interesting Oddity to Major Accomplishment.

“The movie was independently made, and ultimately picked up for release by Allied Artists. However, on that initial release, nobody bothered to put a copyright line on the print. And after it was initially released on VHS by AA’s short-lived home video label, it became widely pirated by PD outfits. A few years later, Max Rosenberg’s Dynamite Entertainment (who previously picked up a few unwanted Hammer movies from WB) sublicensed it and reissued it as Holy Terror to cash in on Brooke Shields’ small role. Technically, Warner Bros. holds the chain of title through Lorimar and their acquisition of AA’s assets. Similar problems have plagued Corman’s Death Race 2000. He fully owns the film, but because the first prints had no copyright notice, they’ve been bootlegged for years on DVD. Many Allied Artists movies have seen frequent PD releases despite being owned by WB.”

“What Alfred Sole did with the Roan Group for the laserdisc release was to make a small set of editorial changes, which allowed him to re-copyright that variant version and prevent it from being hijacked by PD companies. Some of these changes were changed back for the Anchor Bay DVD release, and the Hen’s Tooth release uses the AB transfer. Warner Bros. owns the original theatrical version and has the negative.” — Marc Edward Heuck

Arrow Video’s deluxe Blu-ray begins with an attractive new cover design that betters the original ad artwork, and manages to get what looks like an image of the 9 year-old Brooke Shields in as well. The original is on the flip side. The extras offer a battery of interesting items. The older commentary by director Alfred Sole and editor M. Edward Salier is present, along with a stand-alone video interview with Sole. The composer Stephen Lawrence gets a video interview too, as does as the good actor Niles McMaster. Alfred Sole’s cousin Dante Tomaselli weighs in as well; a quick look at his directing work makes us think that Alice, Sweet Alice must have been a big influence. Author Michael Gingold takes us on a video tour of the film’s New Jersey locations.

I was knocked over by Richard Harland Smith’s new commentary, which explains the religious context of the movie. He notes Alfred Sole’s compassionate approach, especially the ‘Eleanor Rigby’ effect of lonely people left adrift by the church experience. Smith has the horror angles down but also applies his in-depth familiarity with New York theater people and their forays into film work. As the competent but not well known actors arrive on screen, we get a compact bio on each, right down to who they acted with on stage. One bit player comes up, and Smith lets us know that he was convicted for murder only a couple of years later. Smith not only calls out exactly where things were filmed — the church locale is a composite of several locations — but explains in depth how director Sole got in trouble in the same town, for filming an adult film using the exteriors of important people’s homes.

I think my previous awareness of Sole was for his follow-up feature Tanya’s Island, which Cinefantastique magazine covered with glossy photos of model-singer Vanity being embraced by an ape-monster created by Rick Baker and Rob Bottin.