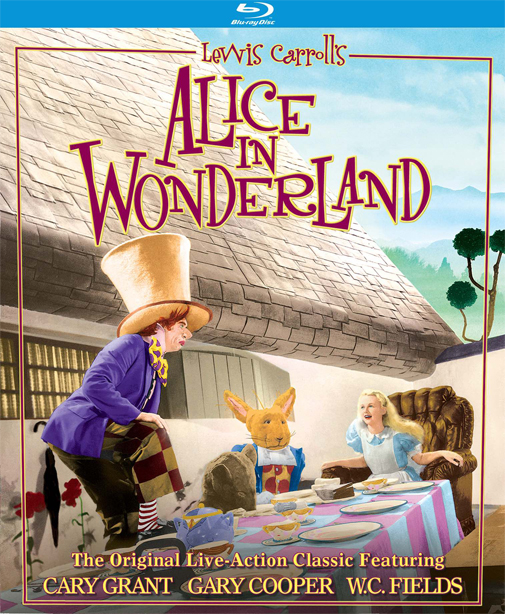 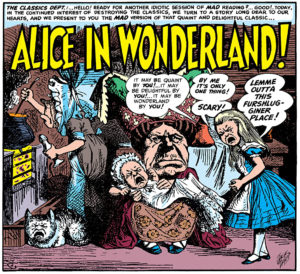 Written by Harvey Kurtzman with art by Jack Davis, Mad‘s 1954 parody of Alice in Wonderland stands as a succinct critique of Paramount Pictures’s 1933 adaptation. The film stars crowd pleasing performers like Cary Grant and W.C. Fields yet manages to be one of the most uniquely disturbing studio pictures ever made.

Directed by Norman Z. McLeod and written by Joseph L. Mankiewicz and William Cameron Menzies, the movie began production in 1932, the centennial of Lewis Carroll’s birth. Carroll’s classic was ripe for Paramount – the studio on Melrose was ground zero for absurdist humor in the early ’30s. McLeod had just wrapped the Marx Brothers’ sublime Horse Feathers while the Mankiewicz-scripted Million Dollar Legs was released the same year – both of them dream-logic farces that could have been warm ups for Alice’s bizarro world antics. 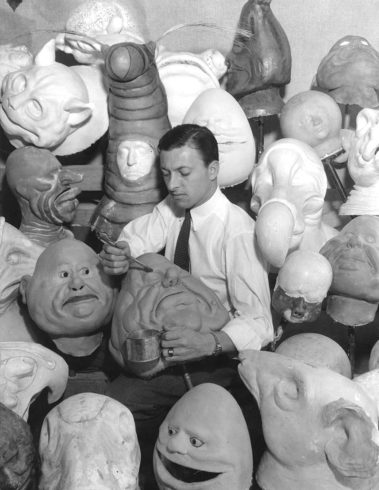 Along with his script duties, Menzies storyboarded the film, Robert Odell designed the sets and Wally Westmore devised the make-up that would transform some of Hollywood’s most beautiful people into nightmare material. To prepare the audience for what was coming, the title cards showed off the actors before and after their transformations – though some of the characters, like Grant’s Mock Turtle and Charlie Ruggles’ March Hare, sport full body suits and masks that suggest those actors got no closer to the soundstage than a recording studio.

The screenplay borrows from both Alice’s Adventures in Wonderland and Alice Through the Looking-Glass. Played by the 19 year old Charlotte Henry, Alice is a bored and sleepy 12 year old, trapped in an overstuffed Victorian sitting room thanks to a snowstorm. Since playing outside is verboten Alice finds escape in the mirror above the mantle just as Cocteau’s poet would do decades later in Orpheus. In that 1950 film the hero passed through his bedroom mirror into the Underworld and there’s definitely something devilish about the place Alice visits – a barren landscape inhabited by aggressively unpredictable freaks. 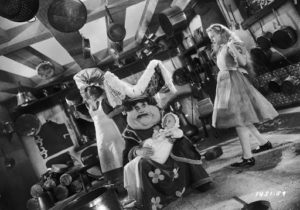 Carroll’s book is fast-paced – it’s only three paragraphs into the first page when Alice falls down the rabbit hole. But the prose feels leisurely; Carroll’s writing is at its most understated and droll when describing the most outrageous circumstances. McLeod’s film is positively frenetic – save for Alice’s conversation with Humpty Dumpty and her tête-à-tête with Gary Cooper’s White Knight, there’s not a contemplative moment in its 76 minutes. Mankiewicz and Menzies include most of Carroll’s most memorable set-pieces, – the hookah-smoking caterpillar, the Mad Hatter’s tea party and the Queen of Heart’s cruel croquet game (McLeod’s use of real flamingoes and hedgehogs is cringe-inducing). 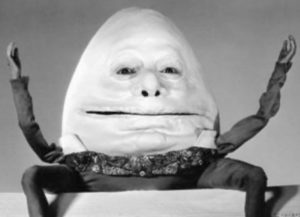 The actors enlisted to portray this peculiar bunch are mixed in their success. Edna May Oliver oozes just the right mix of entitlement and ignorance as the Red Queen but most, like the usually sunny Jack Oakie as Tweedle Dum, Alison Skipworth as The Duchess and Ned Sparks as the caterpillar, barely register thanks to the obtrusive, not to mention creepy, makeup. It falls to Louise Fazenda as The White Queen to provide the film with its most nightmarish image in the film’s chaotic finale; she sinks into a bowl of porridge surrounded by dancing muttons and other anthropomorphic foodstuffs.

One actor who neatly inhabits Carroll’s universe is W. C. Fields as the pompous egghead Humpty Dumpty – in part because the great comedian’s head is already egg-shaped (along with his nose) and the slit that Humpty has for a mouth is a perfect vent for Fields’ sardonic drawling. Fields was enamored of word-play (“Don’t be a luddy-duddy! Don’t be a mooncalf! Don’t be a jabbernowl!”) and Humpty’s authoritarian approach to language – “When I use a word, it means just what I choose it to mean — neither more nor less.” – suits Fields’ solipsistic worldview to a T. 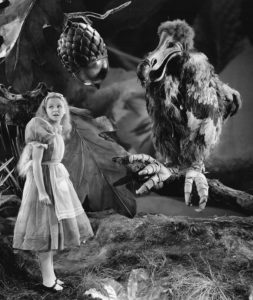 Over the last hundred years there have been dozens of adaptations of Alice including Disney’s insipid 1950 cartoon and Tim Burton’s digitized travesty from 2010. There was a noble effort in 1972 directed by William Sterling with a dream cast including Ralph Richardson, Spike Milligan and Peter Sellers. The most successful adaptation might be Jan Švankmajer’s Alice from 1988, a mixture of live action and Švankmajer’s otherworldly animation. Though McLeod’s film doesn’t capture Carroll’s spirit, at least the director’s spirit was willing and it showed in Paramount’s investment in a first rate cast and crew.

Dimitri Tiomkin composed the cheerfully idyllic score and the film employed two great cinematographers, Bert Glennon, who shot The Scarlet Empress, Stagecoach and House of Wax and Henry Sharp who, having shot Duck Soup, was used to this kind of madness. Their work is given a fine showcase in Kino Lorber’s new Blu ray. Along with the excellent, if slightly soft transfer, the disc presents a feature length commentary from by film historian Lee Gambin and the movie’s original theatrical trailer.