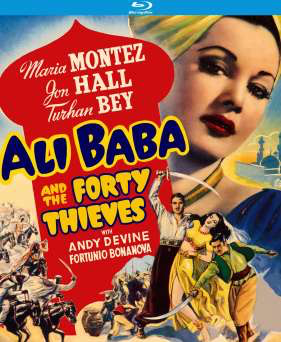 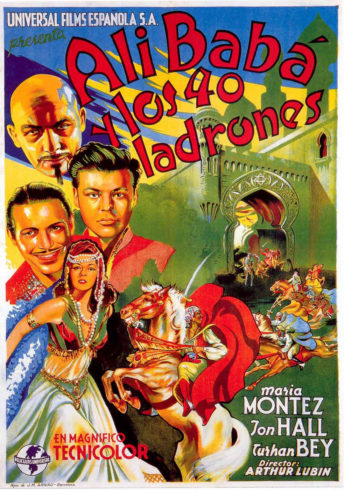 Thanks to George Robinson’s Technicolor photography and Vera West’s kaleidoscopic costumes, death and destruction look pretty as a picture in 1944’s Ali Baba and the Forty Thieves. Director Arthur Lubin’s action fantasy is no patch on the Fleischer brothers’ Popeye the Sailor Meets Ali Baba’s Forty Thieves (it too, a resplendent Technicolor production) but this Universal Pictures release is a cheerfully unassuming time-killer.

This Arabian Nights fable about a caliph’s son who grows up to lead a band of robbers contains a few nuggets of actual history; the movie’s bloodthirsty villain, Hulagu Khan, was indeed the grandson of the infamous Genghis. Hulagu was a thug who didn’t fall far from the tree; he conquered Baghdad and then decimated it, sending the then storybook city into a spiral. The rest of the characters are conjured up from the original folk tales; Jon Hall plays the purely fictional Ali and Maria Montez, his frequent co-star in Universal’s desert bound adventures, is Amara, Ali’s childhood sweetheart. Ali runs his rebel shop out of a hidden cave on the outskirts of Baghdad with a gang modeled on Robin Hood’s merry men – roughriders on the surface but pussycats when a friend is in need. 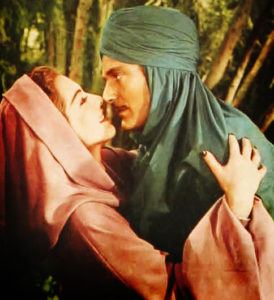 Just as Robin was hounded by Prince John, Hulagu has similar designs on Ali and his insurgent friends who offer the only resistance to the Mongol chief’s reign of torture and terror (again, even these ghastly scenes are given a cheerful glow thanks to cinematographer Robinson). To further gum up the works, the now grown-up (and how) Amara is betrothed to Hulagu leaving Ali with more pressing reasons to put an end to Hulagu’s rule.

The thieves are a typically boisterous bunch in a Middle Eastern John Ford kind of way and most of the fun comes from their comic relief-in-chief Abdullah, played by Andy Devine. The gregarious actor was mainly at home in cowboy movies where he was relegated to sidekick roles but whether hidden under a ten gallon hat or a turban there’s no mistaking that voice; the sound of a rooster being strangled. Stranded on the sidelines is odd man out Turhan Bey as Amara’s slave Jamiel. The handsome Bey, born in Austria to Turkish and Czech parents, is relegated to also-ran status to the affable but less than compelling Hall – a shame because Bey showed real leading man power when given the chance, especially in The Amazing Mr. X for the British-American company Eagle Lion Films. 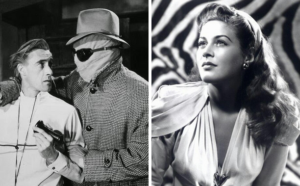 Being Universal, Hall, Bey and the other Technicolored actors performed similar service on the studio’s gothic side of town – part of the movie’s fun is observing Hall in such ripely colorful hues knowing he had a black and white double life as the titular star of that same year’s The Invisible Man’s Revenge. And flaming-haired stunner Ramsay Ames, who plays the duplicitous harem girl Nalu, had her own Classic Monster moment as the reincarnated Egyptian princess Amina Mansori in that year’s The Mummy’s Ghost. She is somehow more ravishing in black and white – go figure. 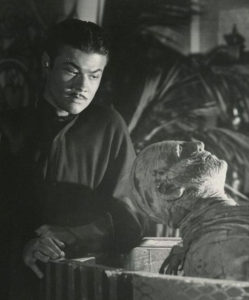 In 1942 Bey had his own run-in with Lon Chaney’s bandaged troublemaker in The Mummy’s Tomb in which he played the cool as a cucumber intruder who inherited the High Priest gig from George Zucco. And it wasn’t for Universal but Frank Puglia, who plays the traitorous Cassim, shows up as the kindly scientist in Ray Harryhausen’s 1957 monster mash 20 Million Miles to Earth. Puglia got another shot at Cassim; in 1965 Universal remade the film as The Sword of Ali Baba with Virgil Vogel directing and Puglia once again stepping into Cassim’s slippers (the studio also reused footage from the original).

Photographing Ali Baba and the Forty Thieves in black and white would have been a recipe for disaster; the ravishing color is just the right sugar coating needed to camouflage the moth-eaten script and wan performances. Fortunately Kino Lorber’s Blu ray of the Lubin fantasy is another top-notch rendering of a superior Technicolor product – Natalie Kalmus, Technicolor’s color director, was a legendary pain in the ass but she got results (sometimes in spite of herself) and Kino’s work shows it off to its best advantage. The disc also boasts a audio commentary from Phillipa Berry who takes a deep dive into the film’s production with scintillating info on the cast, crew and shooting locales. Ali‘s original theatrical trailer rounds off the extras.