If anybody’s dreams are interesting, Akira Kurosawa’s should be, and this late career fantasy is a consistently rewarding string of morality tales and visual essays that pop off the screen. Some of the imagery has input from the famed Ishiro Honda. 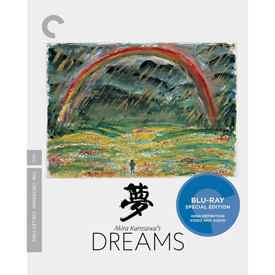 At the twilight of his career, after some episodes of instability and career frustration, Akira Kurosawa hit a high note with the epic costume dramas Kagemusha and Ran. Another few years passed before this movie, a personal project that is simply a series of the writer-director’s dreams brought to life. A definite ‘old man’s movie’, Akira Kurosawa’s Dreams is to some degree moralizing and pessimistic, being made by a man who witnessed some of the worst political events of the 20th century. Perhaps Kurosawa was inspired by Federico Fellini, who lost interest in storytelling and instead turned the last twenty years of his career into an examination of his own personal problems. Kurosawa is at least as interesting as Fellini, and not half as narcissistic. The great Japanese filmmaker’s special visual treatment blends traditionalism with a refreshingly playful use of special effects, right at the cusp of the incoming computer-generated visual revolution. Able to completely control every aspect of his images, Kurosawa’s mastery of cinema is as strong as ever.

Auteurists enjoy nothing better than a psychological profile, and Dreams provides all the self-examination any psycho-biographer could want. A character in each story is either a direct Kurosawa substitute, referred to in the script as “I,” or an observer who might as well be the director. The stories from childhood are steeped in traditional fables, childhood punishments, and references to siblings lost at an early age. The first ‘dream’ involves a fantastic wedding and the last a merry funeral, and in between are stories about the destruction of the environment and an obsession with war — the conflict from the 1940s and the feared future nuclear war. 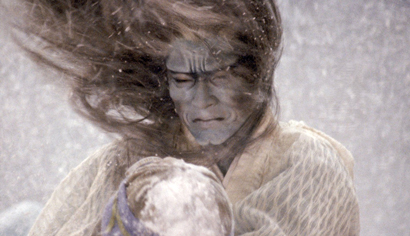 Western viewers and perhaps non-scholarly Japanese might need guidance to understand the fables being referenced, as when (Noh?) dancers restage a wedding procession for foxes, or a grove of fruit trees is represented by a hierarchy of elaborate dolls composing a royal court.

A strong component of each story are oneiric visual memories — images of scenes viewed from one angle, remembered in one particular way, such as the gate entrance to Kurosawa’s childhood home, or the grove of trees where the young “I” hides while witnessing the forbidden fox wedding. The visual control becomes even more impressive as Kurosawa’s art directors warp visual space, to make live settings look like 2-D story illustrations. A perfect matte places a rainbow over a fantastic field of flowers, where “I” will go to beg the foxes for his life. It’s an image that encapsules a life, as it suggests that the artist Kurosawa has been struggling for the better part of a century to justify himself to offended family members, and to nature itself.

Seen from afar, a terraced hillside that once held fruit trees looks like a series of shelves upon which fancy dolls might rest. Even without effects, natural settings are manipulated to create enclosed images. Kurosawa simplifies the story-concepts of his dreams into single unforgettable sights — a volcano ringed by fire, the entrance to a mountain tunnel, pools of water on the floor of a crater that reflect a red-sunset sky. That final image of the water reflections at first seems a miracle — as if Kurosawa and his crew and actors waited for the perfect conditions for such a compound image. Only after a while do we realize that some subtle digital manipulations might be responsible. 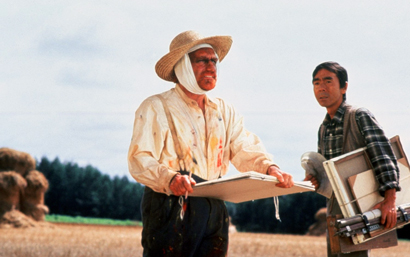 Kurosawa approaches the struggle of the artist with a sequence in which his substitute enters a Vincent Van Gogh canvas, to find the unhappy man painting in a field. Martin Scorsese plays Van Gogh, a fairly unrewarding idea. But the “I” character then proceeds to walk through several of Van Gogh’s ink drawings and preliminary sketches, like an Incredible Shrinking Art Critic come face to face with giant, thick daubs of paint. Digital matte-work makes the illusions practical, but Kurosawa doesn’t go overboard. The point is made without screaming ‘fabulous effects here.’ We immediately think of the showoff visuals in the elaborate but annoyingly lightweight film blanc What Dreams May Come. Kurosawa’s flat images actually have a thematic point.

Kurosawa’s WW2 remembrance is a J’accuse– like piece about a wandering ex-officer confronted by a battalion of ghost troops, phantoms that want to go home and don’t realize they’re dead. There’s no political angle on this, just the realization that every man of Kurosawa’s generation is figuratively surrounded by the ghosts of hundreds that were expended in warfare. This can only be a tangential “I” character, because Kurosawa himself didn’t serve in the army. 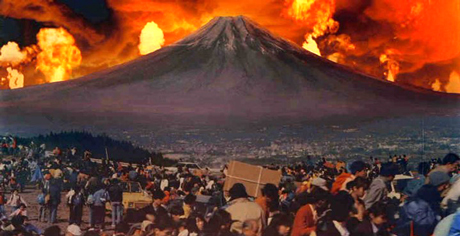 Kurosawa goes all-apocalyptic on us for a couple of episodes about atom war. One shockingly prophetic piece has six atom reactors exploding behind Mt. Fuji, creating a growing furnace of fire that begins to melt the mountain. It’s a dream of Fukushima, 21 years in advance. A panicked expert names the different kinds of deadly elements contained in each color of lethal gas. A whole population has been driven into the sea, leaving a beach littered with clothing and baby buggies, like the empty oyster shells in Lewis Carroll’s The Walrus and the Carpenter. A second post-apocalyptic episode on a similar volcanic hill sees a ragged survivor confronted by a horned human-demon, who shows him a place where more demons writhe in agony. All humanity will be transformed into demons, that will live by eating each other. Not a lot of hope there.

The key to those scenes and others is Kurosawa’s creative consultant, Ishiro Honda, who in the ’50s and ’60s was a top creative with Kurosawa at Toho, directing all those elaborate Kaiju and science fiction fantasies. If only Kurosawa had been able to collaborate with Honda back then — ! The image of the volcano was surely composited at ILM, but it has the graphic look of Honda’s spectacularly successful volcano at the end of his 1956 Rodan. The giant mutant plants in the post-apocalyptic blackout sketch remind us of the surreal flora of Honda’s scary (and very adult) Matango, still a superior horror tale. Kurosawa manages to slip a bit of classic Toho fantasy into his dreams. 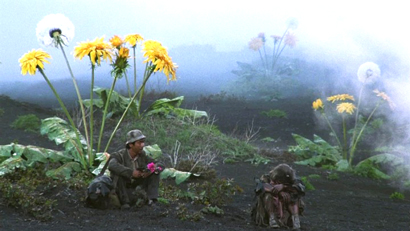 The final dream is a Utopian idyll that shows Kurosawa turning his back on futurism and endorsing traditional, nature-based values as the only hope for mankind. It’s not naïve but it doesn’t offer much help for the next generation, which has no way to follow the ideas, even if it wanted to. The “I” character visits a beautiful, nameless village on a stream lined with water wheels. An old man (Chishu Ryu) lectures him on the right way to do everything and explains why the funeral he’s to attend is a joyous thing. The village has little or no ecological footprint and no use for electricity; everything is natural and perfect. Well, it is a dream. The village also has no sickness, no outside competitors or enemies, no overpopulation and completely cooperative weather. They’re happy in their ignorance and are free of hatred, bigotry, envy or avarice. I don’t find it a very substantive dream, but more of a fairy tale. The same goes for Kurosawa’s un-filmed episode, originally proposed to be the last. A dream of universal international peace, it couldn’t be made because it required thousands of extras and scenes filmed around the world.

The Criterion Collection’s Blu-ray of Akira Kurosawa’s Dreams is a gorgeous item that provides Kurosawa’s delicate fantasy with the visual representation required to make it function. The two-hour movie has only six hundred shots, but each of them alternately caresses or attacks the eye. Even in ‘random’ backgrounds not a blade of grass appears to be out of place; it’s a real thing of beauty. The same goes for the soundtrack, which helps instill a series of moods that give each sequence the feel of a dream memory. 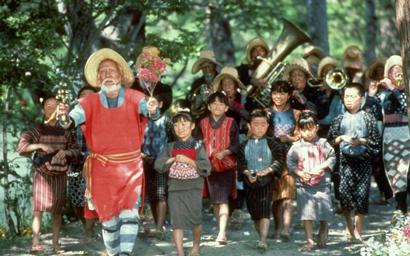 Criterion’s extras begin with Stephen Prince’s commentary, which tells us what we’re seeing but also fills in a lot of detail we gaijin would not intuit on our own. Prince also explains the international film politics behind Dreams, with America’s top ‘film student’ directors influencing Warner Bros. to bankroll Kurosawa’s picture. I didn’t get through a 150-minute documentary by director Nobuhiko Obayashi, the maker of the bizarro horror picture Hausu. Much of the running time is rather inferior video effects, in between extensive video coverage of the shoot. Perhaps there are sections mid-way with great revelations about Kurosawa, but I’ll have to look for them next time.

Kurosawa’s Way is a less artistic but more accessible docu by the director’s long-time English interpreter and part-collaborator, Catherine Cadou. She interviews a number of directors, who provide warm remembrances of their Japanese mentor (names below). Lengthy new interviews give us the thoughts and recollections of Teruyo Nogami, a production manager, and Takashi Koizumi, an assistant director. A trailer is included, and the illustrated insert booklet contains an essay by Bilge Ebiri, plus the script for that un-filmed ninth dream.

I have tangential personal memory pertaining to Dreams; in the middle 1980s I was still close pals with co-worker Rocco Gioffre, who was a matte painting apprentice on Close Encounters of the Third Kind. When Rocco went to Dream Quest, he was joined by an equally youthful Mark Sullivan, another artist-genius with a knack for finding great solutions for special effects problems. Apprenticing with Rocco one year was a Japanese fellow named Yusei Useugi. All three of them came to my house at one time or another to watch whatever ragged VHS movie I could dig up. So I was pleased to see the credits for Dreams with Mark Sullivan as a visual effects supervisor, and Yusei as ILM’s billed matte painter. I’m glad to have been able to watch those artists at work; it certainly added to my appreciation of where the real talent is in ‘filmland.’