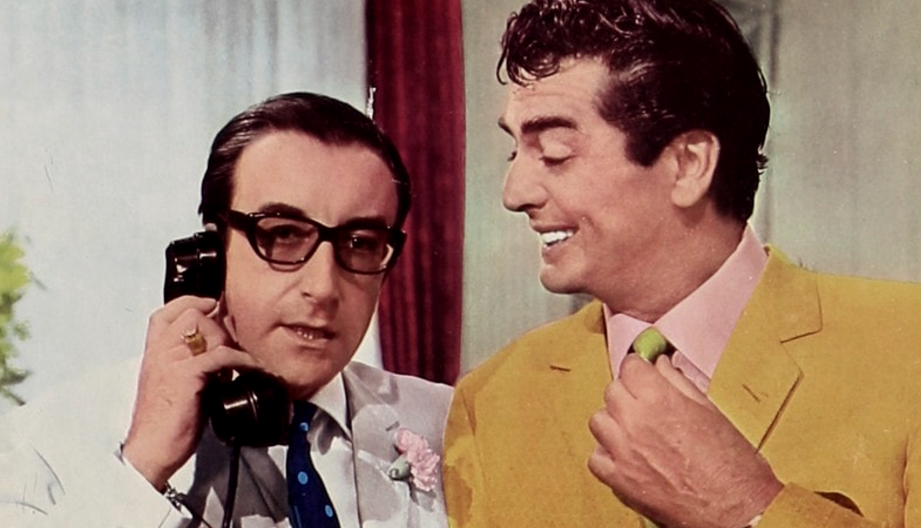 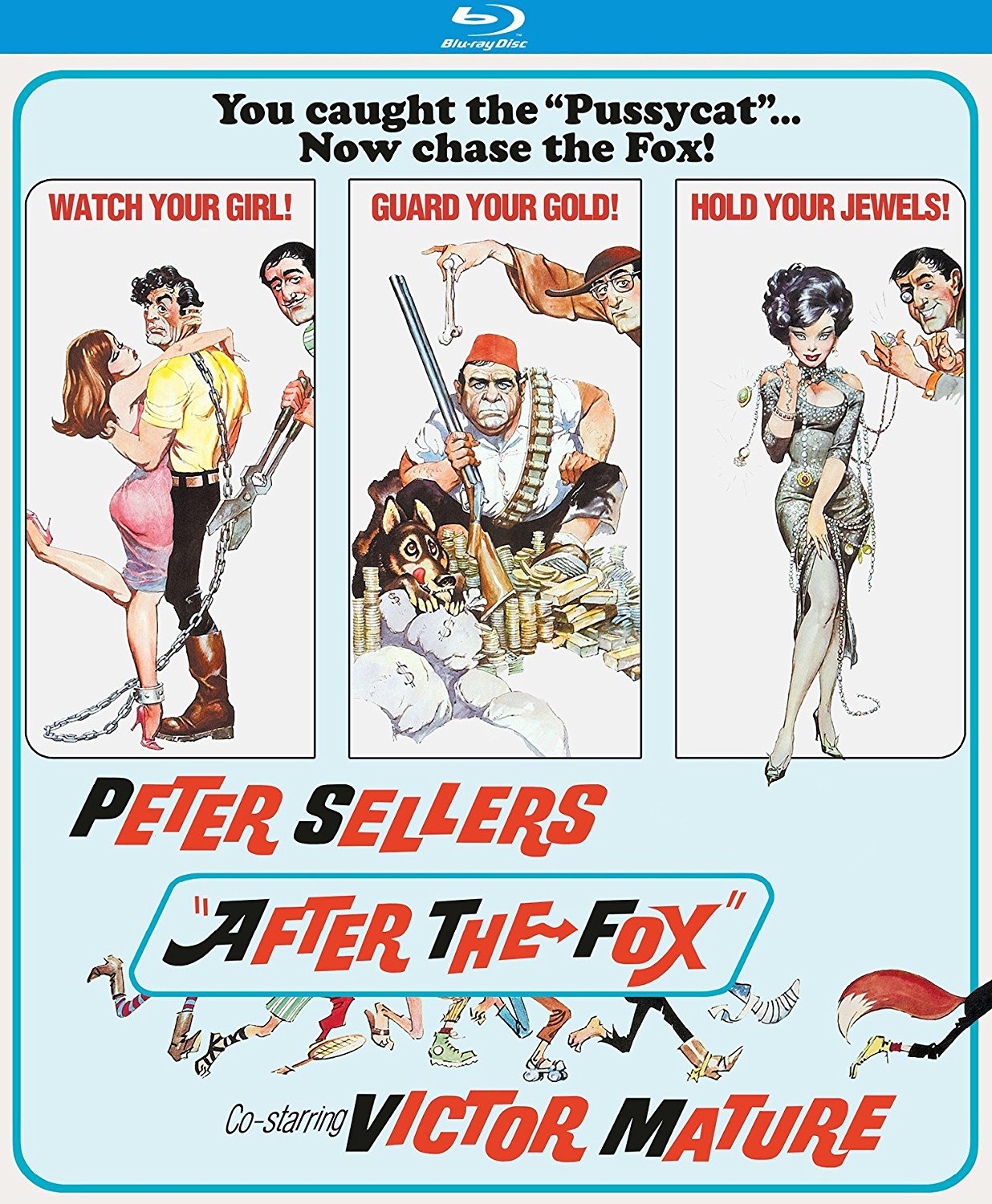 After The Fox, a sunny mid-sixties farce about con-artists and movie-makers, boasts a powerhouse pedigree featuring leading men Peter Sellers and Victor Mature, a script by Neil Simon and Cesare Zavattini, music by Burt Bacharach, poster art from Frank Frazetta and the legendary director/actor/gambler Vittorio De Sica at the helm. 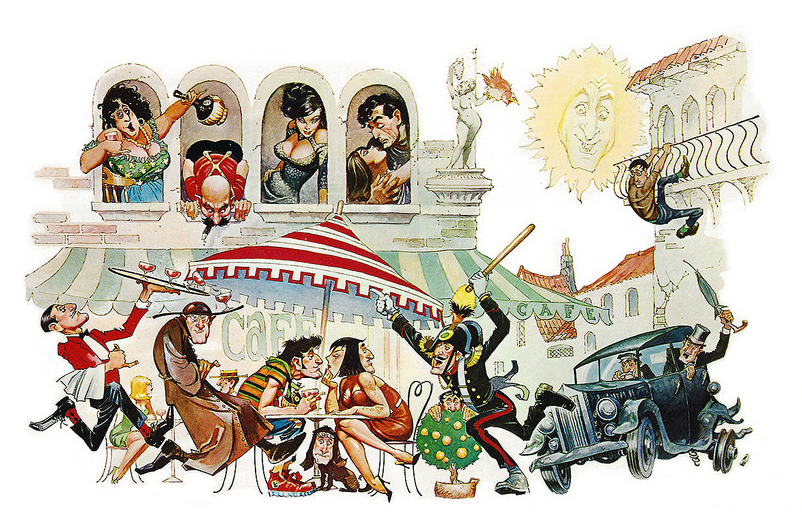 With such diverse talent on board, the film was somewhat misleadingly promoted as another in the line of 60’s screwball hipster comedies like Casino Royale and What’s New Pussycat. But the result is closer to De Sica’s laid back charmers from the ‘50s, Miracle in Milan and Gold of Naples (in fact, Gold of Naples figures in the film as a self-deprecating in-joke from De Sica himself).

Sellers plays Aldo Vanucci, a local legend known as The Fox, a master impersonator and frequent guest of the neighborhood prison. Though he lives in high style behind bars, he plots his escape for the opportunity to hijack a pile of gold bullion worth 3 million dollars. 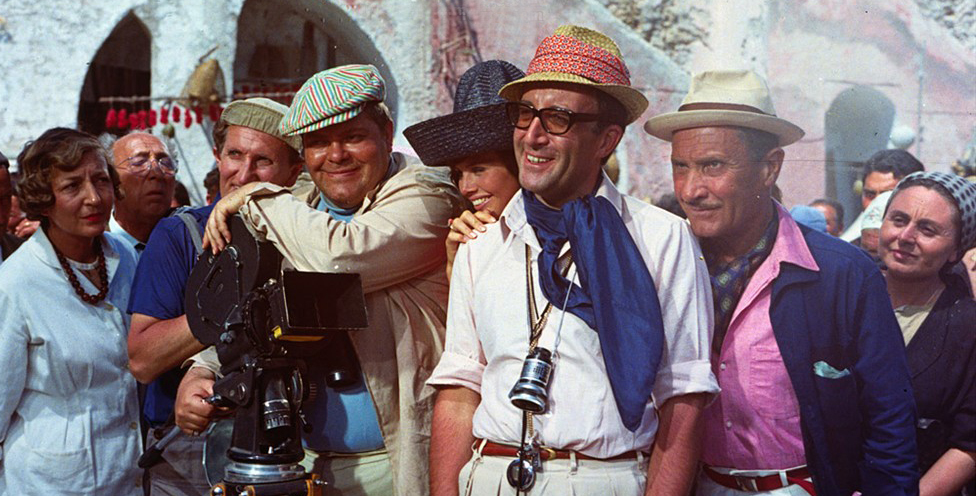 Accompanied by a motley crew of amiable thieves and Gina, his toothy sexpot sister (played by Britt Ekland), Vanucci disguises himself as “Federico Fabrizi”, a crazy quilt of several real-life Italian directors, and cons an affable but out-of-work actor (played by a comically self-aware Mature) to help pull off the heist.

After The Fox gets off to a shaky start, perhaps in part because the odd couple combo of Bronx-born Simon and Italian-bred Zavattini who wrote the script with the help of two very necessary translators. It doesn’t help that the actors are hampered by the capricious voice dubbing (indigenous to so many European productions) and there’s too much wink-wink comedy establishing the paper thin plot and characters.

But once De Sica assembles his merry band of thieves in the cozy confines of Sevalio, the bucolic fishing village where Vanucci’s trap will be sprung, the movie has achieved a mellow comic mood all its own. 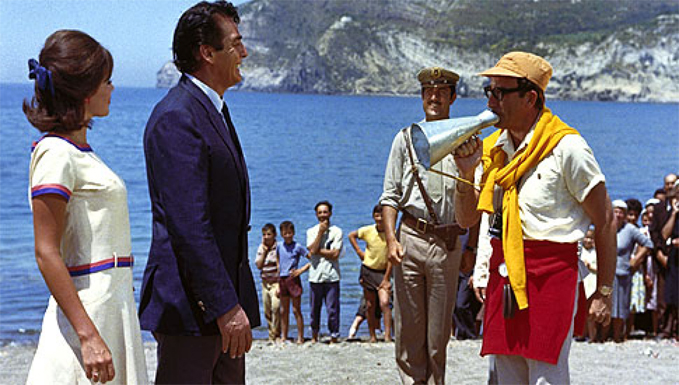 Throughout his brilliant career De Sica juggled comedy and tragedy with the ease of an Astaire two-step. As the petty thief who impersonates a war hero in Roberto Rossellini’s arresting black comedy General Della Rovere, De Sica anticipated that other great impersonator, Peter Sellers. Sellers repays the compliment with a relatively subdued performance that seems determined not to upstage his fellow clowns, enhancing the benevolent nature of De Sica’s lovely seaside burlesque.

Kino Lorber’s blu ray makes do with a very average source print to bring a generally pleasing picture to their new blu ray release. They’ve included a short list of extras including Larry Karaszawski’s Trailers From Hell commentary and high def trailers for not only After The Fox but its swingin’ sixties companion pieces, What’s New Pussycat and The Party. 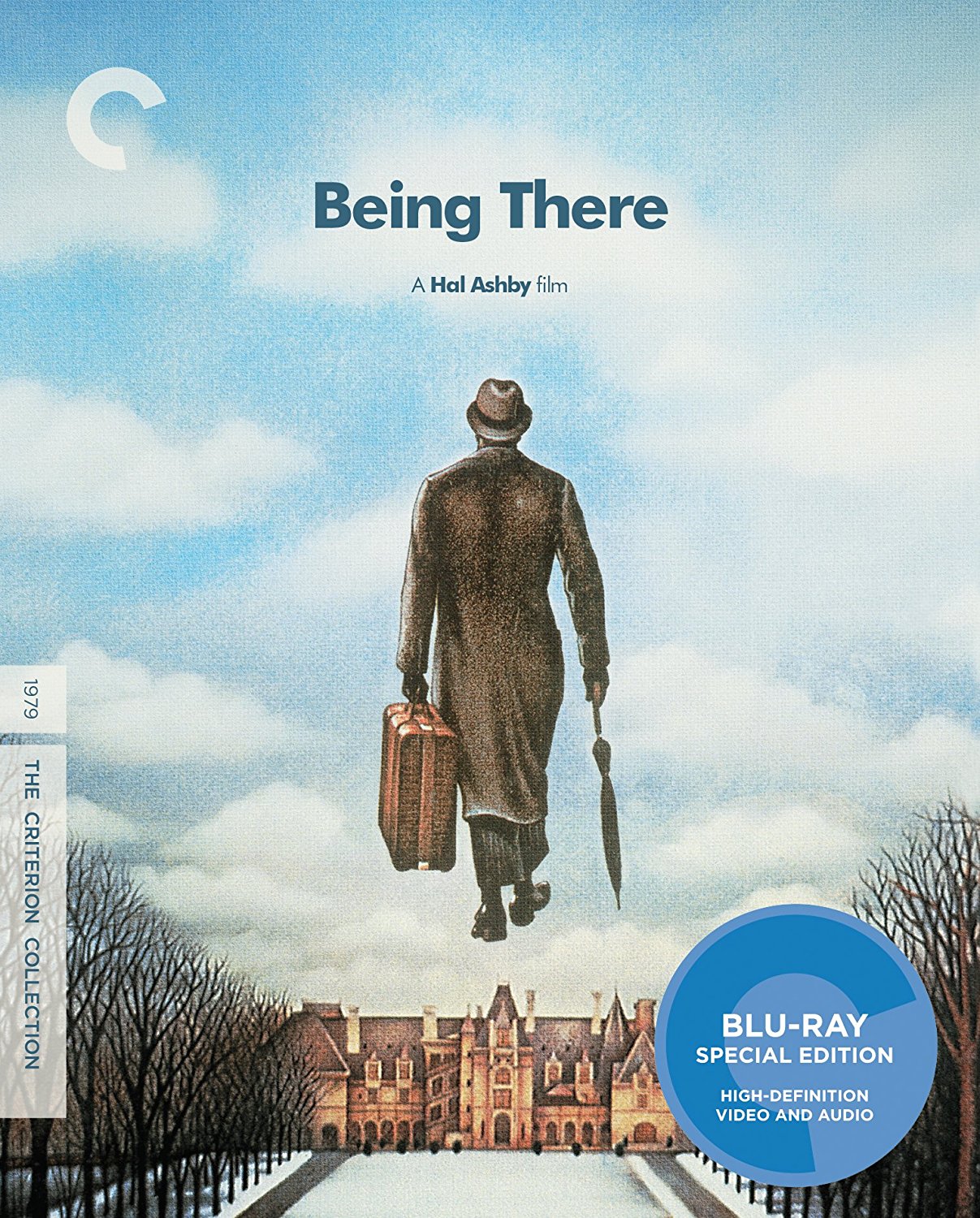 In an impersonation worthy of Peter Sellers himself, director Hal Ashby delivers a more than satisfactory approximation of Jerzy Kosiński ’s drolly satiric prose in 1979’s Being There.

Kosiński’s now all-too-plausible fairy tale, about a simpleton’s inconceivable rise to great power, was published in 1970 and took eight years to enter production (after a failed attempt by Kosiński himself to direct). Peter Sellers plays the novel’s ambivalent hero, an ethereal idiot named Chance who has lived his entire life within the confines of a deteriorating townhouse in the midst of the nation’s capitol. 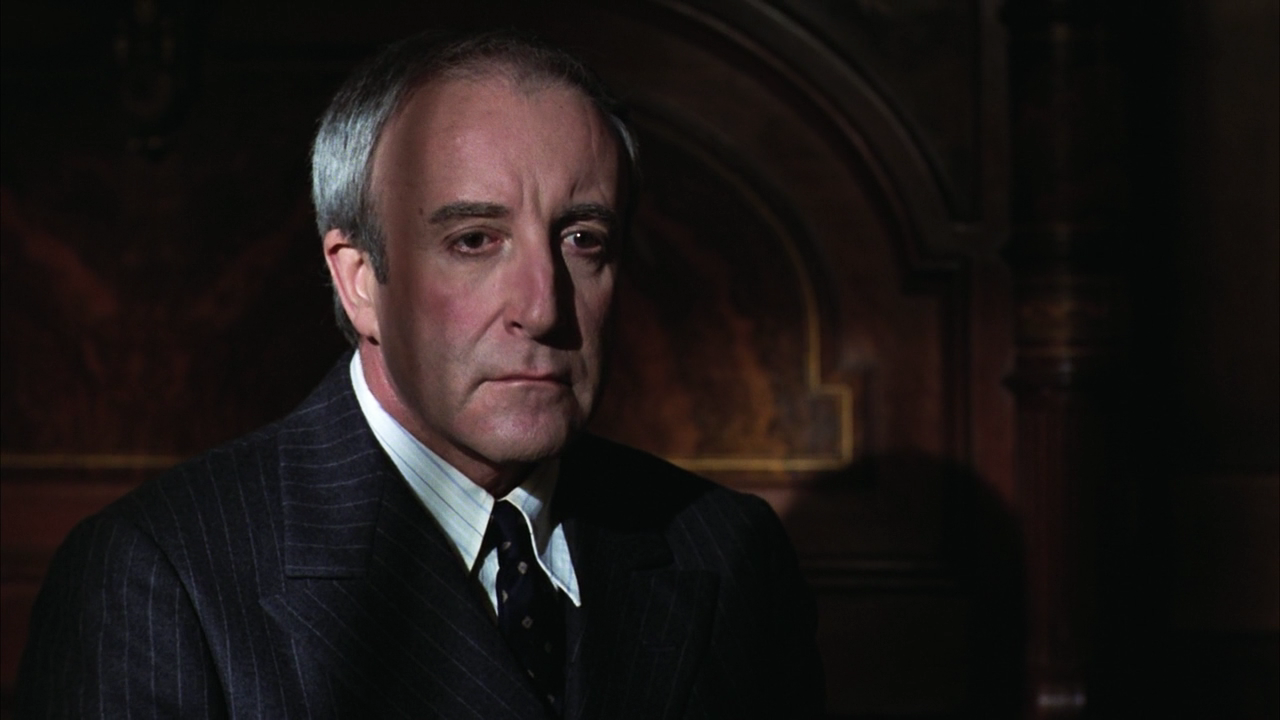 Chance’s days and nights consist of tending the estate’s garden and watching television. This decades-long exposure to the constantly caroming electrons of the Orthicon tube have flattened this mild-mannered soul’s personality into nothingness, he exists as a cipher – not just to those around him but seemingly to himself as well.

One day, the elderly owner of the estate dies and Chance is cast out on the mean streets of Washington’s slums. The film documents his absurd rise to fame and fortune, an incurious Candide for our curious times.

Chance, by chance, finds himself in the palatial home of an influential industrialist, Ben Rand (Melvyn Douglas) who himself is in the midst of dying. Even at death’s door Ben has hope in his heart and he perceives this grey-haired introvert’s halting descriptions of his unremarkable gardening career as the wisdom of a reticent buddha. And that is, in essence, the joke at the center of Being There; the world is run by people who hear what they want to hear and Chance, a sky-rocketing media sensation, is upheld as their celebrity savior. 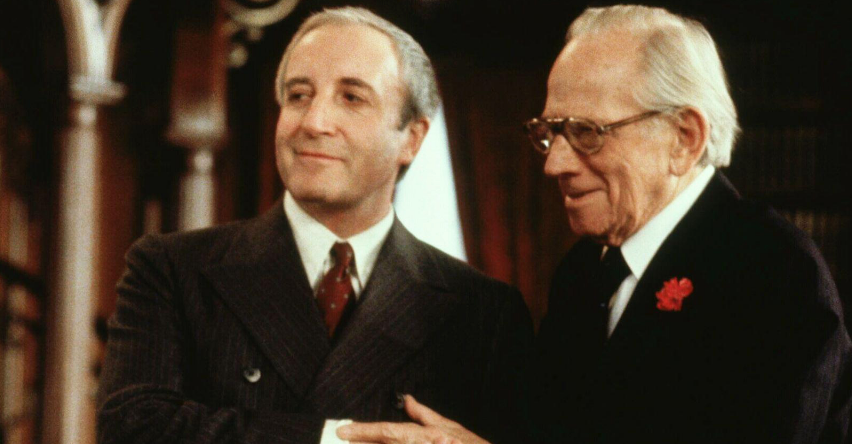 Kosiński and Robert C. Jones’ fine script revels in the art of talking at cross purposes and the film’s cast embraces each opportunity to misunderstand each other. As Rand’s shyly passionate wife, Shirley MacLaine joins a host of superb supporting players including Jack Warden as a gruff but empathetic president and Richard Basehart (as a jolly Russian diplomat) who all take turns hearing what they want to hear.

Sellers’ penultimate performance (he died just six months later) is an extraordinary departure for someone who made his bones inhabiting outrageous charlatans and surreal psychopaths. Chance the empty vessel was, apparently, Seller’s opportunity for a self portrait. As the man who said “I do not exist… there used to be a me, but I had it surgically removed”, Sellers found a way to tap into his own lack of character. The miracle is that he was able to make this blank slate so poignant. 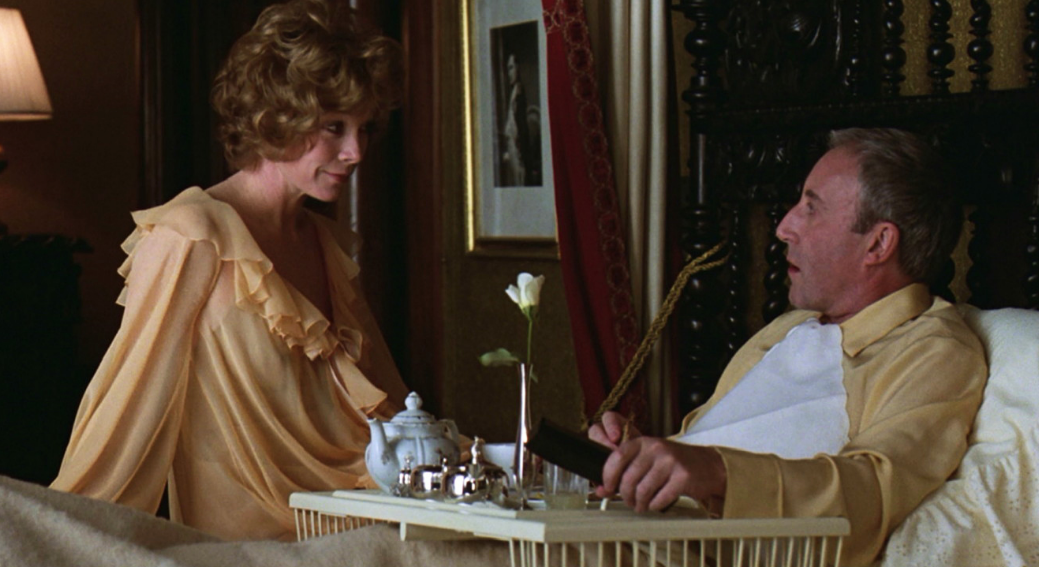 Criterion continues to pamper their customers… their release of Ashby’s melancholy satire is packed with fascinating material about the making of Being There and the people in front of and behind the scenes. Along with a vivid transfer of Caleb Deschanel’s delicate cinematography, the disc supplements include:

A newly produced documentary on the making of the film.
Excerpts from a 1980 American Film Institute appearance by Hal Ashby.
A The Dick Cavett Show from 1979 featuring Jerzy Kosiński.
Peter Sellers on NBC’s Today (with the alarming Gene Shalit) and Britain’s The Don Lane Show both from 1980.
Promotional spots featuring Sellers and Ashby and the original theatrical trailer and TV spots.
Criterion has also included an oddly aimless deleted scene plus outtakes of the hilariously infamous “You tell Raphael…” scene.
A print essay by critic Mark Harris is neatly folded into the blu ray case.