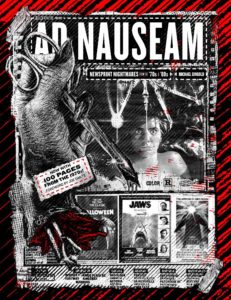 Ballyhoo, the art of selling the public something they don’t want, has never changed—but like the devil it has assumed many disguises. In the 19th century small towns were inundated with colorful broadsides, barn-sized murals promoting the arrival of the circus or a traveling vaudeville show. The 20th century made do with the daily newspaper’s theater section—all in black and white but jam-packed with exciting possibilities. Today we have Twitter and your neighbor’s cousin’s friend on Facebook. That’s not exactly progress.

The movie advertisements of a not-too-distant yesterday were called ad mats. They permeated the entertainment sections of the dailies, crammed together side by side like post-war housing developments. They were in close competition for our undivided attention so the artwork was designed to attract—and shock—the most jaundiced soul. The copy was as uninhibited as any carnival barker’s come-on: “If this movie doesn’t make your skin crawl… it’s on too tight!” “To avoid fainting just keep repeating ‘it’s only a movie, it’s only a movie…'” You can still experience the siren’s call of those lurid come-ons via the monthly schedule published by the New Beverly Theater, a Los Angeles repertory house that specializes in the glory days of rebel movie-making. For folks unable to make the trek to L.A., there’s a game version that comes in the form of a book—Michael Gingold’s Ad Nauseam, a 368 page encyclopedia featuring ad mats from the ’70s and ’80s with an accent on exploitation fare. The game is played thusly; Guess the Movie by the Blurb—Question: “A Love Story of Hate” Answer: Honky (a streetwise soap opera directed by William A. Graham and starring Brenda Sykes.) 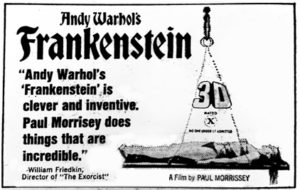 This is a world where Nicolas Roeg (Don’t Look Now) rubs elbows with  Al Adamson (Dracula Vs. Frankenstein). William Friedkin turns critic and gives a thumbs up to Andy Warhol’s Frankenstein. And for the movie scholar who thinks they know everything, there’s plenty of under the radar discoveries; The House that Vanished (Aka Scream… and Die!), and Please! Don’t Go in the Bedroom—a British-Spanish thriller directed by José Ramón Larraz. Eyes of Fire (Aka Cry Blue Sky), was a horror film set in the old west directed by Avery Crounse. And from 1979, choke, Dracula Blows His Cool, a disco-fueled sex comedy featuring the count as a horny fashion photographer. 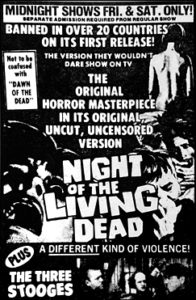 More fodder for the researchers—the endless retitling of exploitation fare like The Phantom of Terror (better known—much better known—as The Bird with the Crystal Plumage). Poor George Romero really got the run-around; his 1973 science-fiction film The Crazies showed up in some dives as Code Name: Trixie. Martin, the director’s 1978 film about a misunderstood night owl, became Martin The Blood Lover. And the cherry on top? Romero’s zombie classic, Night of the Living Dead, went out on a double bill with The Three Stooges (“A different kind of violence”)

After leafing through the cheap thrills of Psychic Killer and Dr. Black and Mr. Hyde, it’s a bit of a jolt to run into Jaws, the epitome of the big studio blockbuster—until you remember it’s five times more scarifying than Don’t Open the Window! and far bloodier than that grindhouse perennial, The Texas Chainsaw Massacre. The widespread acknowledgment that a big budget film could have low budget intentions signaled the moment when movie advertising began to eat itself—fast on the heels (fins) of the Spielberg classic is The Rocky Horror Picture Show: “A different set of Jaws.” 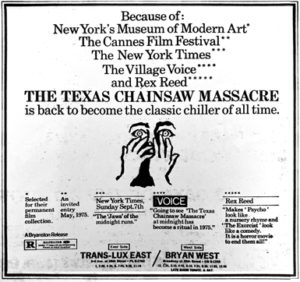 Gingold makes sure to document the time when a superb film could be marketed solely on its exploitation merits, which is what happened with Carrie. (“If you’ve got a taste for terror, take Carrie to the prom”). Luckily for Sissy Spacek, word about the superior quality of De Palma’s heartrending shocker spread soon enough and her Oscar nomination was assured. That approach was turned on its head when Leatherface was given a re-release touting his high art cred (“Because of New York’s Museum of Modern Art… The Texas Chainsaw Massacre is back as the classic chiller of all time”). 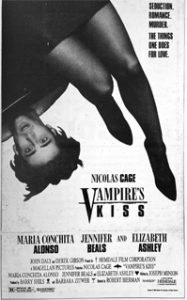 Along with The Stepfather and Vampire’s Kiss (whose advertising framed Robert Bierman’s gonzo psycho-thriller as a mere screwball comedy), there are more than a few class acts like Carrie floating alongside the usual flotsam and jetsam. Ad Nauseam gets it all right—it’s no small task to find these materials in such excellent shape (though many of them probably went through some restoration.) The first edition of Ad Nauseam focused on the ’80s, now it’s returned in a new revision with an expansive section on the ’70s, the exploration era’s peak decade. To celebrate these lowly pleasures, Joe Dante—who’s represented by a few of his own films, including Piranha, The Howling, and The ‘Burbs—introduces the book with a foreword that looks backward—to the days of stale popcorn, sticky linoleum, and triple bills to die for.

Gingold has put together an engrossing reclamation of the past, an entertaining time killer that reflects the same unserious attitude of the entertainment it documents. It’s also an inadvertent history lesson—from The Incredible 2 Headed Transplant to Killer Klowns from Outer Space, it’s somehow comforting to find that the more ballyhoo changes, the more it stays the same.