A CineSavant Article  A mention in a book by Tom Weaver of an odd shared visual in two Universal-International movies of the 1950s prompts a quick frame-grab comparison, and also some thoughts about how movies were really made back when twenty dollars was probably considered a big budget expenditure. Some savant I am … I simply didn’t see what was in front of my eyes! A contributor (and friend) had to hold me by the neck to see what a few others have figured out before. Bud and Lou are involved, so who can complain? 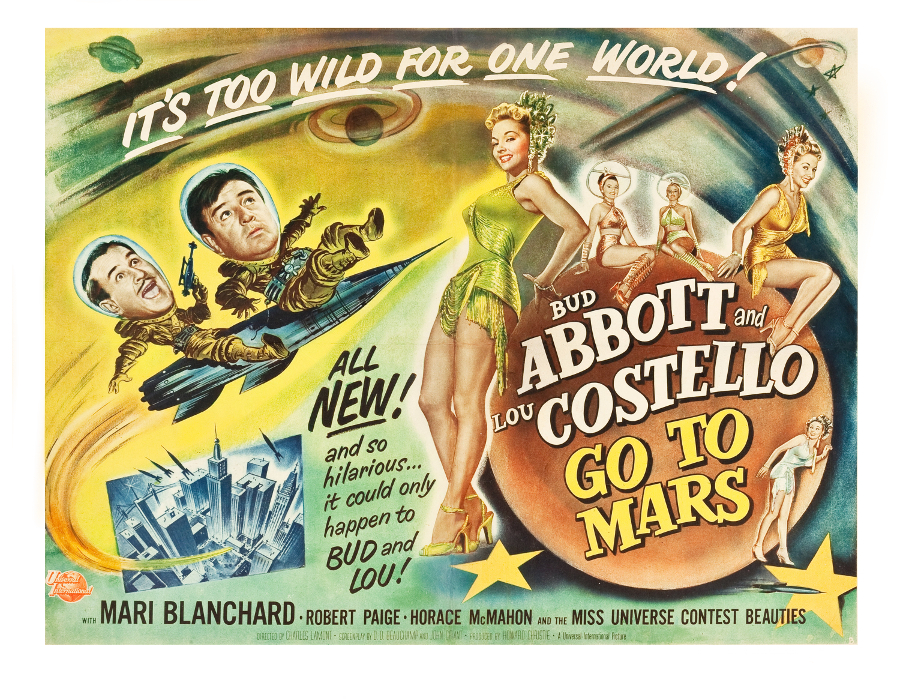 Now for some fun, the man said. This one gets filed in the IN BOX for ‘Odd Mysteries.’ Friend and advisor Craig Reardon has been enduring the world’s forced isolation (cough) by doing what we all do when the going gets tough, watching TV.

Craig found something while doing a feature-by-feature survey of Universal’s Abbott & Costello Disc Set, the one that Charlie Largent reviewed here at CineSavant last December. Craig was soaking up the kooky pastiche Abbott & Costello Go to Mars (1953), enjoying its smorgasbord of nifty David Horsley optical magic, when something caught his professional eye.

And We Thought We Knew ’50s Universal Pictures.

This observation got past me, even after reading Tom Weaver’s book The Creature Chronicles: Exploring the Black Lagoon Trilogy. Researcher and advisor Gary Teetzel pointed to page 84 of the book, where Tom Weaver details how Mark Wingfield, aka ‘blackbiped’, posted about this ‘anomaly’ on the Classic Horror Film Board. This little article offers some frame grabs illustrating Wingfield’s discovery, plus a little discussion.

Let’s start with a shot in Creature from the Black Lagoon, specifically the curious view of the underground grotto that serves as the Gill Man’s secret lair. Julia Adams lies atop a rock, like a sacrifice on an altar, while the Creature takes an oxygen break underwater. Viewers often notice the set of mystery columns visible in the deeper background. What are they? 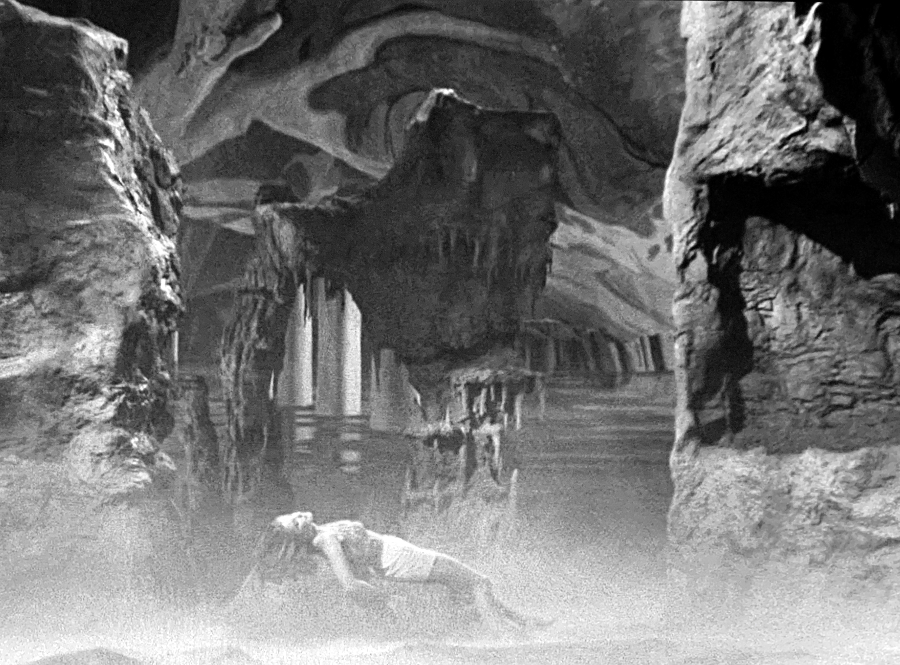 They’ve confused me for years. My standard joke is that they’re part of a pipe organ installed in the grotto because the Gill Man rooms with the Phantom of the Opera. Since there really ought not to be anything man-made in an undiscovered prehistoric cave, the pillars are a serious visual non-sequitur.

Where did the pillars come from?  What are they doing there?  Mark Wingfield found the answer to the first question, at least. 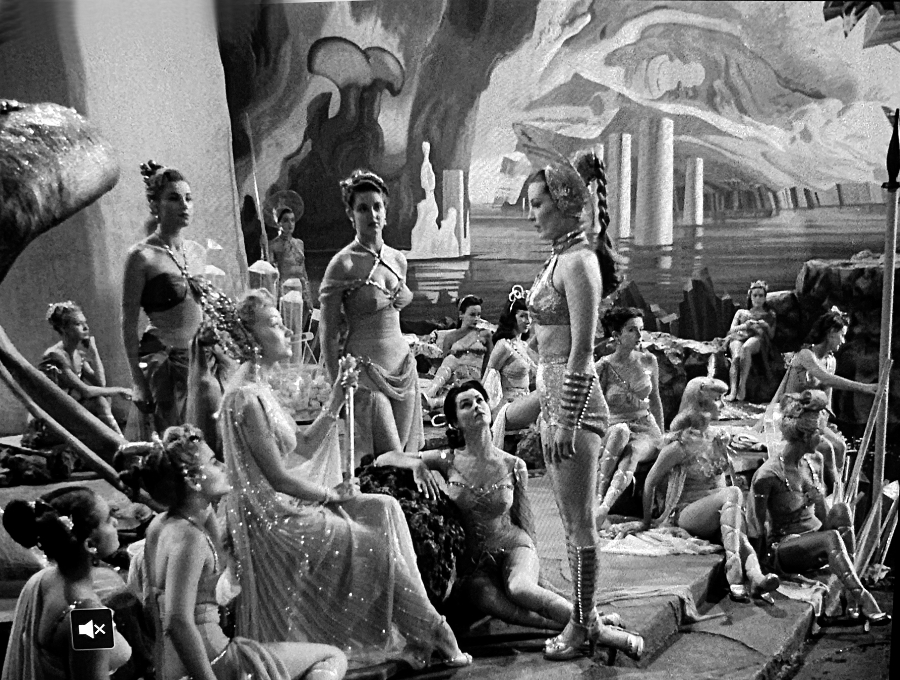 The answer is in full view in Abbott and Costello Go to Mars, a Universal picture released the previous year. When Bud and Lou end up on Venus (not Mars) they are soon playing footsie with the inhabitants, an all-female, all-gorgeous Venusian race. In the underground Amazon civilization flow ‘mysterious pools’ and streams, weirdly contorted rock formations with no rhyme or reason, and crazy ‘architecture’ of a similarly rushed and ad-hoc appearance. We’re invited to glom the big throne room of the imperious Queen (Mari Blanchard), where all the other glamor girls lounge around. The models and showgirls received individual credits in the main titles.

Let’s push in on the background of the weird environment. Looming behind the Queen’s sorority clatch is a huge, rather rushed-looking painted backdrop. 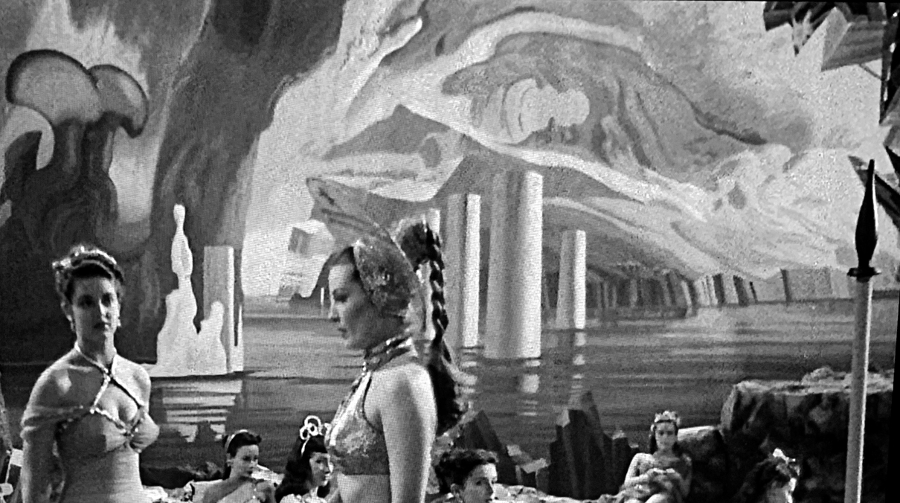 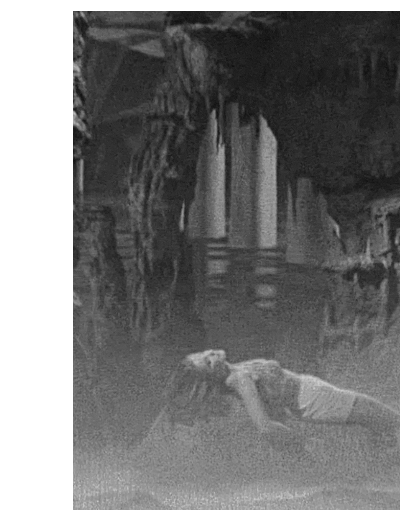 And right there in the middle of a body of [painted] water are the same pillars seen the next year in Creature from the Black Lagoon. Can’t miss them. Except, I did. Or rather, I misinterpreted them in innumerable viewings. In Mars the vertical columns clearly rise out of a painted body of water — we can see that a big underground pond is behind the Throne Room. I’ve never perceived that the background in Creature is supposed to be a pool of water. Not just because it is motionless — I always read the reflection of the pillars as a lower extension of the pillars, with dark stripes around them. My mind interpreted them not as pillars but as tall vertical pipes, as in a pipe organ. ( → ) I also never understood that a scenic backdrop was in use — the mist in the scene made me think I was looking at a real construction, sticking out of the rocks.

My mental image is still of a pipe organ-like thingy poking out of some rocks, a real physical construction on the set. Craig Reardon had to walk me through these frame grabs to convince me. Now I know what it’s like when a reader insists he’s seen something in a movie, that can easily be demonstrated was never there.

I checked the movie again. The pillars flash by in two or three more shots at the finale. They are also present in an earlier scene, when Richard Carlson and Richard Denning explore the cave. The setups in each movie include a pool of water in the foreground. Does that perhaps suggest that both shows were filmed on the same Universal sound stage?   Did each stage have its own scenery dock, or did some building on the lot store dozens of these big scenic backdrops?

Here’s where Craig Reardon’s experience comes in. He worked many times as a makeup specialist at Universal, and picked up quite a bit of the lot’s history. Craig asks us to remember a key thing about Universal: they never used a set once if it could be used six times. To create the Gill Man’s grotto for Black Lagoon they clearly hung this exact same scenic backdrop from A&C Go to Mars at the back of the stage, and rolled some different rock formations in front of it. The backdrop was given no modification at all — Craig says it would’ve taken a scenic artist no longer than his lunch hour to paint out the columns for Creature. But they didn’t even bother. 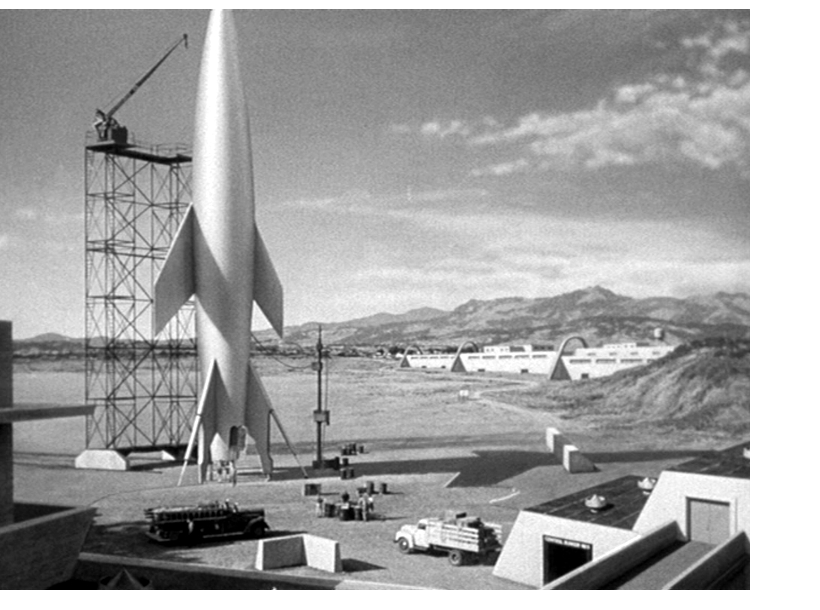 Craig assured me that Universal-International recycled everything, shamelessly. We only notice the borrowings in the movies we watch obsessively. In his commentary for The Leech Woman, Tom Weaver noted that all of the film’s interior sets had been inherited, unchanged, from a recent Douglas Sirk drama. Two years after A&C Go to Mars, the little tram car used by the glamour girls became a people-mover transport for This Island Earth. A mask from Abbott and Costello Meet Dr. Jekyll and Mr. Hyde was altered and repurposed for Tarantula. William Alland’s 3-D Creature film was clearly looking to cut corners. The monster’s underground grotto looks pretty good considering it was assembled from hand-me down rock cave scenery pieces, with a giant scenic backdrop to give it some scale.

In Weaver’s book about all things Creature, he ends the mention of Mark Wingfield’s keen observation with some input from another sci-fi film authority. Effects supervisor and author Robert Skotak also interviewed producer William Alland, and vaguely remembered Alland alluding to the possibility that one idea for Creature was a backstory about a lost Gill Man civilization. Unlike some other interviewees Tom Weaver had to endure, Alland was fairly reliable in most interviews. So maybe (and only maybe) when the Mars backdrop went up and he saw the big pillars, Alland said, “Ah, that’s just ruins from the city of the Creature’s ancestors. We’ll cover that story in sequel number fourteen.”

Of course there are other viewpoints … we at CineSavant have discovered that the respected Doctor Frank Baxter has his own theory for why the grotto where dwells the Creature from the Black Lagoon has those strange pillars: they were put there by The Mole People of Asia Minor. Needing a break from the Sumerian daily grind, those furry fossorial Mole People annexed the Amazon as an underground vacation destination.

I thank Craig Reardon for digging into this important issue, and coming up with the visual proof. As a consolation prize, Gary Teetzel reminds me that Lou Costello DID meet the Creature, in a comedy sketch at the end of a 1953 episode of the Colgate Comedy Hour. It’s viewable here. The Gill Man appears about 13 minutes in — I guess it must be his actual media debut.

(These images are much bigger when opened in a new window) …

Abbott and Costello Go to The Black Lagoon
Not on Disc, dammit
Movie: well it’s two movies, but I’m not reviewing a movie.
Video: See movie
Sound:ditto
Supplements: None. I get enough hostile mail as it is.
Posted: March 31, 2020
(6236mars)