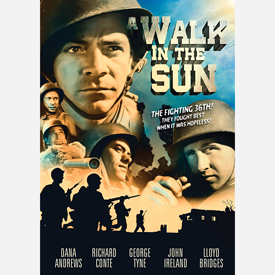 Out of hundreds of war-themed movies released during World War 2, most of those that dealt directly with combat were sanitized, or exaggerated, or carefully tuned to induce a specific response from viewers: anxiety, outrage, resolve, and even laughs. There were morbid atrocity-minded pictures and escapist romps where jolly commandos made Hitler’s men look like bumbling fools. In 1945 the European conflict was almost won. A year later Hollywood would want to put screen combat away for a few seasons, but first came some pictures with different agendas. John Ford’s They Were Expendable boosts the Navy, but its story concentrates on a series of numbing defeats. William Wellman’s The Story of G.I. Joe tells a no-frills tale of infantrymen in Italy, as filtered through the experience of war correspondent Ernie Pyle, who died on Okinawa sixty days before its premiere. The film is impressive in its avoidance of heroic clichés.

A third 1945 winner is Lewis Milestone’s A Walk in the Sun, an independent film with a rocky production history. Fledgling producer Samuel Bronston started the show but lost control of it when his backers withdrew their support. Milestone took over the production, which was eventually distributed by 20th Fox. Bronston had to sue to regain some points for his investment of time and money. Tax laws and studio accounting practices made it difficult for independents to poach in what the majors felt was their turf. Variety reported that neither man made any money on the film, despite a decent box office performance.

Made on a small budget, A Walk takes a folksy, poetic approach to its story of combat, using voiceovers and even songs to get into the thoughts and fears of a platoon making a beach landing at Salerno, Italy. An adaptation of a 1943 book by Harry Brown, the generic story follows a single platoon from the beach to the taking of a farmhouse a number of miles inland. The show has 21 speaking roles and the action is so limited that it could easily be produced as a play. Director Milestone stays in close on his excellent cast, which at the time featured only one top-lined name star, Dana Andrews. But almost every one of the actors makes a memorable impression. Several parlayed their performances here into long careers.

Rather than offer a straight synopsis, it’s easier to sketch out the film through its characters, who are introduced in photos on pages of Harry Brown’s book. Sgt. Bill Tyne (Dana Andrews) has the most screen time. He’s an affable fellow liked by all. Staff Sgt. Eddie Porter (Herbert Rudley of Decoy) must take command after two ranking officers are killed. He’s nervous and high-strung and clearly unfit to lead, a problem noticed by several men. Very aware of Porter’s problem is Pvt. Archimbeau (legend Norman Lloyd of Saboteur)), a gabby but reliable ‘thinker’ who thinks he’s always being given the worst jobs. PFC Windy Craven (John Ireland) is the most relaxed soldier on this perilous inland hike; he’s forever composing letters home to his wife in his head, sizing up the men around him. Working as a team on a .30 caliber machine gun are Pvt. Rivera (soon-to-be star Richard Conte) and his loader Pvt Jake Friedman (George Tyne). The two of them trade insults and quasi-complaints. Rivera mooches cigarettes (“Butt me”) and boasts of his prowess as a killer.

Future TV star Lloyd Bridges is a dependable Sergeant, a farmer from the Midwest. Bridges popped up before this in seemingly dozens of bit parts, but here he’s finally able to sketch out a full character. Various levels of nervousness and fatalism are provided by Pvt Judson (Steve Brodie of Out of the Past), Pvt. Tranella, whose Italian language skill comes in handy when some Eye-Tie prisoners are taken (Richard Benedict of Ace in the Hole), and Pvt. Riddle, who needles one of his comrades without mercy (John Kellogg, a memorable face from noir & gangster pictures). In tiny parts are actors that would have to wait years to make their mark. Chris Drake would later play the unlucky New Mexico State Trooper in Them! Robert Horton would go from nobody to TV star on Wagon Train. 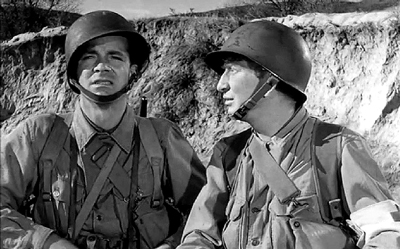 The most creative casting against type gives us the beloved comic and famed Disney voice artist Sterling Holloway as a well-intentioned but flaky medic. Also given a few choice lines is Huntz Hall, for almost the only time in his career playing something other than the Brooklyn wise-ass Bowery Boy Sach Jones. Director Milestone uses Holloway’s light-comedy associations to heighten the audience’s sense of jeopardy. When we meet Holloway in A Walk our first thought is, ‘he isn’t going to last long.’

The brilliant director Lewis Milestone makes A Walk in the Sun feel big-scale even though little production value is in evidence. The landing is just skipped over, by a dissolve from a stock shot of landing craft, to the platoon scaling the first hill in from the beach. American vehicles stand in for German hardware, and the most expensive looking scenes are flyovers of real aircraft. Some may be stock shots but a P-51 Mustang stands in for a German plane that strafes the patrol. At least the Agoura and Fox ranch locations look something like Italian terrain.

The action is limited but quite effective. Milestone intersperses his static close-ups and deep focus groupings with many trucking shots, either following soldiers as they walk or rushing across spaces from one group to another. And there’s also the director’s famed trucking shot that rakes across soldiers rushing toward the camera, used to great effect In his classic All Quiet on the Western Front. In that show the swift camera motion expresses the POV of a lethal machine gun. Milestone uses his signature everywhere. In The Front Page a similar shot show the bustle of a newspaper’s printing room. 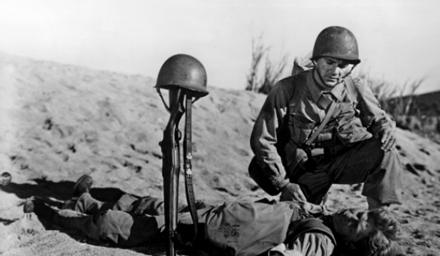 Burgess Meredith offers a narration up front, that seems redundant when songs take over to provide another stylized commentary. A mellow voice honors the soldiers of the patrol on what is ‘just a little walk in the sun;’ the lyrics have a past-tense feel. The songs are by left-wingers associated with pro-labor folk music, the kind condemned by the F.B.I. as Communist. Composer Earl Robinson and lyricist Millard Lampell would both become blacklist victims, Lampell just as he found success as a member of the singing trio The Almanac Singers. Sung in a ‘Paul Robeson’ style by baritone William Gillespie, the songs are used almost identically to the musical interludes in Leo Hurwitz and Paul Strand’s pro-labor patriotic protest film Native Land (1942).

Milestone also found himself blacklisted just a few years later, and busied himself on Europe and working for TV. His screenwriter Robert Rossen likewise tangled with the committees, and named names to keep his career. When Milestone returned briefly to studio work, his first show was the strongly anti-commie Korean War epic, Pork Chop Hill (1959). 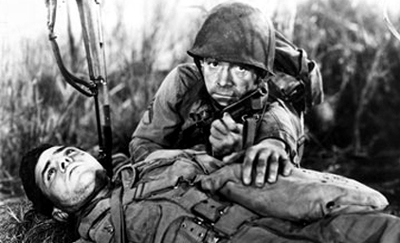 The personalities of A Walk in the Sun are what stick in the mind. The soldiers are not fully defined by ethnic qualities, even if the poetic narration identifies them with their home states and backgrounds. Their banter is excellent, even if somewhat stylized. Screenwriter Rossen uses transparent euphemisms for swearing, as when Rivera repeats the adjective ‘loving’ in a context that shows it’s subbing for the F-word. Rivera also says “Hoist tail!” twice, which would seem a placeholder for ‘haul ass.’ It’s amusing to hear the movie tough guy John Ireland speaking in poetic tones, but Rossen is also good with the boredom-passing / tension relieving idle tough talk. Yet I perceive none of the pontificating found in some Dalton Trumbo wartime scripts, where the discussion always seems to double back to thoughts of a rosy post-war future with a new sense of fairness and social justice.

The most unusual moment is when a commander has a nervous breakdown in front of our eyes, something that just didn’t happen in early wartime pictures. But other elements are predictable, such as the patriotic march tunes quoted by composer Fredric Efrem Rich for the final assault on the farmhouse. I’m told that director Sam Fuller, himself an actual infantry soldier, did not care for Milestone’s picture and put his thoughts in words. That story isn’t in the Sam Fuller autobio I’ve read.

We finish A Walk in the Sun still admiring its terrific cast. The overall elegiac tone is also pleasing. The movie tells us that these guys are heroes, the saviors of the world, precisely because they’re a non-pro citizen army motivated by an idealistic spirit and a democratic camaraderie. There’s nothing subversive about that. 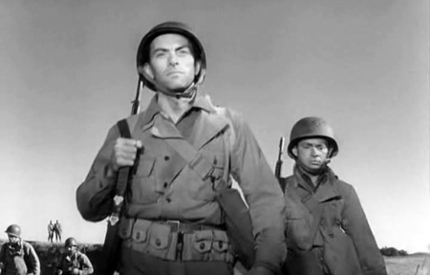 The Sprocket Vault / Kit Parker Films’ DVD of A Walk in the Sun is an older release being reviewed because the film can use the attention. After its original release by Fox, the film rights reverted to its producers, and it is not in the Public Domain. Just last year A Walk was selected for preservation by the National Film Registry of the Library of Congress. Although one would hope for a major restoration, Kit Parker’s DVD is better than adequate, quality-wise. The soundtrack is clear and the images, although not as bright or sharp as a newer transfer, are quite good.

The disc offers a nearly sixty-minute interview piece with actor Norman Lloyd. A camera records the famed actor/producer/director and lets him talk nonstop. Lloyd relates a great deal of information and anecdotes, but much of the running time consists of him juggling phrases as he tries to decide what to talk about next. Much more rewarding is a half-hour visual essay by Joel Blumberg, with whom I am not familiar. Blumberg displays excellent raconteur skills as he goes through the entire cast actor by actor, offering quick bio details, a character sketch and opinions about show business reputations. Those cast members that only look familiar, seem like old friends by the time Blumberg is done.

Also included are trailers for A Walk and other Sprocket Vault war movie holdings. The catalog includes a clutch of old noir entries from Lippert Pictures, a number of them co-productions with Hammer Films.

The show has removable English subtitles.