A Taiwanese wuxia masterpiece from director King Hu: three hours of suspense, visual beauty and amazing action scenes. A beautiful mystery woman captivates an artist-scholar. He who happily becomes her strategist in a battle to hold off an army… partly with ghost illusions. 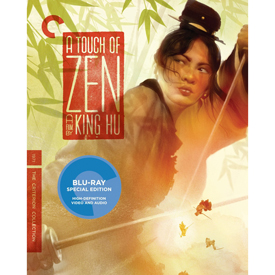 What I know about Asian cinema can be carried inside a thimble, and the very few pictures I’ve reviewed, such as the intriguing The Cave of Silken Web are usually recommended to me by other reviewers. Ang Lee’s Crouching Tiger, Hidden Dragon did almost zero for me, but I once had an incredibly weird trailer for Master of the Flying Guillotine, and was delighted to catch up with the whole demented movie. Criterion’s blurbs present King Hu’s A Touch of Zen as one of the treasures to be found among classy Hong Kong and Taiwanese martial arts epics. I found it to be a very impressive entertainment, indeed.

The epic action thriller has both grandeur and mystery. It takes place in a part-historical dimension, with characters and combat stylized in accordance with Chinese theatrical tradition. Realistic? It’s better than realistic. 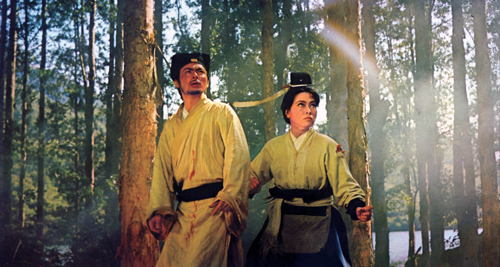 Gentle but shrewd artist-scholar Gu (Shih Chun) is intrigued when a mysterious stranger comes through his shop, apparently looking for someone. The stranger also prowls around a doctor-apothecary who sells medicines from a booth in the square. While taking care of his mother, Gu comes in contact with an equally mysterious woman, Yang (Hsu Feng), who has taken up residence in a ‘haunted’ ruin and has a habit of disappearing at a moment’s notice. More investigation reveals that representatives from the East are searching for Yang and the doctor, who are actually survivors of an unjust enemies purge at the Emperor’s court. Several years ago Yang’s father was tortured to death and his entire family sentenced to die. Yang escaped with two loyal generals and was saved from imperial patrols by a group of monks. But now they have been found and an entire army is on the way. Gu is not a fighter like Yang and her comrades, but he fancies himself an amateur military strategist. He advises the group on when and how to ambush their enemy, and suggests a novel way of getting an advantage: use the reputation of the haunted ruin to frighten the Emperor’s troops.

Welcome to the special Asian martial arts genre called wuxia. Director King Hu’s approach and style to epic action adventure is so Western-friendly that little or no adjustment is needed for newbie viewers. The basic story is simple enough, and there’s no necessity to remember dozens of names and faces, as sometimes is the case with traditional Japanese historical fantasies. Hu has terrific instincts for direction and a traditional approach to blocking out his scenes — we’re never at a loss for what is happening, where we are, or what our immediate surroundings are. This is important for a film with long passages without dialogue, especially in the first half. 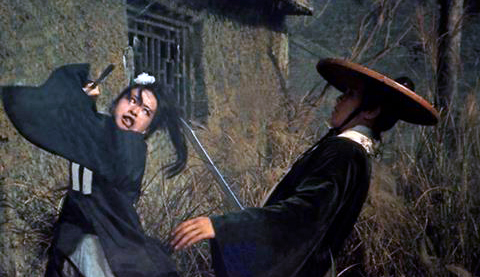 In building his initial mystery, King Hu adopts the basic subjective camera technique of Alfred Hitchcock. As Gu follows the stranger through town, and seeks the elusive mystery woman that attracts him so, Hu alternates shots of Gu’s curious face and precise trucking shots representing what he is seeing. The interesting surroundings and Gu’s likeable personality do the rest. King Hu’s narrative skill is such that a full hour passes before the first real action scene, which comes as a big surprise to our cultured hero. Gu has no idea that the quiet Yang is actually a blazingly fast swordfighter, and moves to protect her against an aggressive intruder. Yang instead steps forward, produces hidden weapons and engages the stranger in a running battle, vaulting between buildings and clashing on a bridge above a garden. We’re just as dazzled as is Gu.

A Touch of Zen uses standard flashbacks to fill in the story, elegant dissolves shift us in and out of different time frames, such as one from a campfire to a row of misty mountains. It doesn’t matter that the characters aren’t deep, as their externalized personalities are fascinating. We’re always watching their reactions to see when they’ll detect danger. A calm scene will be interrupted by a Leone-like close-up of giant eyes darting to one side. Yang and her two fighting confederates strike heroic poses, and turn their heads as one to react to an approaching foe. King Hu’s precise camerawork uses trucking shots that emphasize the warriors’ instinctively fine-tuned motions, starting and ending camera motions in perfect cadence with the characters.

Perhaps what makes Hu’s action scenes so special is that they are constructed like old American Musicals — it’s not ‘real’ combat, but the kind of Peking Opera whirling-dervish fighting that substitutes dynamic, ‘cool’ moves for realism. I hope that the slightly sped-up action is what’s making it all look so dangerous, as accidental sword-actor contact seems almost unavoidable. Lightning-fast blade slashes basically fan the air in front of Yang’s face. Simple hand-blocks stop what should be crushing blows. Heroes and villains alike toss thin iron mini-lances in groups of three, while archers shoot arrows in groups of three. Arrows shot full force are swatted away like they were tossed twigs. Yet the high intensity of the fights — the reactions, the editing, the visual elegance — makes all the CGI-enhanced light saber-ing in Star Wars look tame.

Also amusing are the yellow-clad monks, fighters that can hold off more than twice their number of armed soldiers despite carrying no weapons. It has to be magic: they can stop sword blades with a well timed two-finger pinch, block hammer blows with their fingers and send foes flying insensible with a flick of a wrist. Do their super-duper skills come from all that meditating?  The leader talks like Yul Brynner crossed with an aloof poet.

The loosey-goosey physics in these battles serve mainly to make them more exciting, as in old American westerns wherein fist-fighters exchange scores of kayo punches and neither party receives more than a light bruising. Some use is made of wire rigs, but Yangang and others often bound across rooms, leap through windows and hop through gardens with the aid of hidden trampolines. Again, it all seems derived from the aesthetic of comic books and musical choreography: it’s an action fantasy, not a historical document. If it looks exciting and dynamic, who cares if it’s not ‘real?’   We worry not about who will survive, but about what will happen between the unlikely couple Gu and Yang. Will Gu shake off his scholarly reserve and participate in the fighting?   The two share a great ‘instant heat’ romantic night in the empty fort. Will they fall in love, or will Yang tell us that her life is now dedicated to fighting for justice?

King Hu’s visual taste and judgment are impeccable. His shots are beautifully framed. The movie will frequently pause for us to take in a few stunning images of nature or the overgrown fort, before forging ahead with its story points. Three hours later, it all seems over much too soon.

We’re told that A Touch of Zen was originally shown in two parts, over a year apart. That might explain the under-performance of part two. Only three years later was it was revived at a film festival and given a new exhibition and critical life. 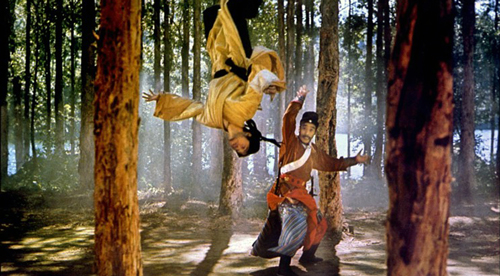 The Criterion Collection’s Blu-ray of A Touch of Zen looks great. It was mastered from a 4k restoration done in Italy and funded by the film’s star Hsu Feng, in honor of the great King Hu. The picture is rich and colorful, with only a few scenes (or shots, really) betraying some source issues. We do notice things that weren’t removed, such as a scene that had dirt on the lens. Also, one must simply accept that King Hu’s anamorphic lenses have severe distortion issues. In pan shots across rooms and distant scenery, the image w  a  R  p  s like a barrel. I suppose the distortion could be neutralized digitally, but after a few scenes I thought the effect gave the picture character, as if it were meant to be projected on a curved screen.

Stars Hsu Feng and Shih Chun are still with us, and both look terrific in new interviews from Criterion disc producer Curtis Tsui. Their memories make A Touch of Zen seem even more of an accomplishment: the show took three full years to film. We learn about King Hu’s earlier career with the Shaw Brothers, before leaving Hong Kong to produce and direct on his own in Taiwan. The martial arts aspect of the movies is addressed as well. King Hu left in an unplanned shot where Yang’s perfect warrior hair suddenly falls in her face: it happened because an errant sword swipe had just grazed her scalp, right above the hairline.

The interviews continue with directors Ang Lee and critic Tony Rayns, and a French docu from 2012 goes even deeper into Hu’s career and legacy. Criterion’s A Touch of Zen is a really special disc — Asian martial arts fans will appreciate the gorgeous restoration, and the educational extras allow newbies like myself to understand what’s going on in the wild wuxia action scenes.