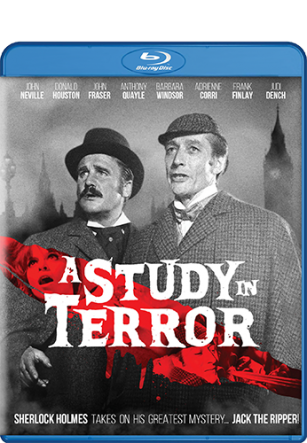 From master criminals like Professor Moriarty to Sebastian Moran, Sherlock Holmes faced his fair share of danger – but his greatest nemesis may have been the man who created him, Arthur Conan Doyle. Exasperated by his brainchild’s overwhelming popularity, the weary scribe groused, ”I think of slaying Holmes…  and winding him up for good and all. He takes my mind from better things.”

Doyle tried to kill off his cash-cow on at least one occasion but the great detective had the last word, maintaining a firm grip on our imagination decades after other seemingly invincible literary characters dropped down the memory hole – perhaps because Holmes is far more mysterious than any mystery he himself might have investigated – a very private private eye.

So coldly analytic that he made Mr. Spock seem like Gene Wilder in The Producers, Holmes was a fiddle-player, a celibate, a misogynist and an enthusiastic fan of cocaine when his restless mind was not being taxed to its utmost. 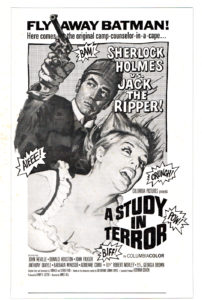 He was a man who seemed to live life entirely from the neck up – but when it came time for the brilliant sleuth’s appearance on the silver screen he may have been too brainy – over the years filmmakers hoping to waltz their audience through the talky parts began to brush aside the contemplative nature of the detective in favor of a more energetic stance, like Peter Cushing’s athletic interpretation in Hammer’s 1959 version of The Hound of the Baskervilles.

That action-packed approach met its breaking point in 1966 when the cerebral agoraphobe was compared to a bona fide superhero – at the height of the furor surrounding ABC’s Batman, the posters for A Study in Terror proclaimed “Here Comes the Original Caped Crusader”.

Batman’s entry into the pop art zeitgeist was inspired by Roy Lichtenstein’s mock-heroic artwork but the attempt to do the same for Holmes stalled in Columbia Pictures’ advertising department – A Study in Terror is standard-issue Holmesian product hewing close to the well-worn Victoriana of Baker Street’s most famous (and unchanging) resident.

Starring John Neville as Holmes (23 years before his glint-eyed take on Baron Munchausen) and Donald Houston as Watson, director James Hill’s fog-bound caper finds the legendary crimebusters hot on the trail of the infamous butcher Jack the Ripper. After acquiring a box of surgical instruments missing precisely one scalpel, Holmes and Watson follow a merry go round of clues strewn about the blood-soaked alley ways of Whitechapel and aristocratic gardens of the gentry – with some valuable advice from brilliant older brother Mycroft along the way.

Even the shadowy presence of the Ripper lurking at the film’s edges doesn’t energize the movie’s Jolly Old England cliches with their predictable barroom brawls, comical cockneys and bawdy streetwalkers. With a hawkish profile that could slice cheese, Neville captures the finicky appeal of the detective (and indeed engages in some Adam West-approved fisticuffs) but as Watson, Donald Houston rocks the boat with an annoyingly wide-eyed take on Nigel Bruce’s bumbling interpretation of the good doctor.

On the plus side of the ledger, the overly-familiar dramatics are buoyed by the presence of Anthony Qualye as a potentially duplicitous doctor, Frank Finley as Inspector Lestrade, Robert Morley as brother Mycroft and the unexpected appearance of Judi Dench as a young charity worker up to her neck in trouble.

This was not the only go-round for Holmes and the Ripper, they first met in a 1907 German story, How Jack the Ripper Was Taken and have crossed swords on other occasions, most memorably in Murder by Decree (featuring an over-achieving cast including James Mason, David Hemming, John Guilgud and Christopher Plummer as Holmes).

A Study in Terror was produced by Herman Cohen, the man responsible for sadistic shockers like Horrors of the Black Museum, in which a blond sexpot is impaled on a bed of knives, and Konga, where a blank-faced bobbysoxer finds herself sacrificed to a teen-eating plant. The then-40 year old filmmaker had been producing cruelly misanthropic variations on women-in-peril horrors like I Was a Teenage Werewolf and Black Zoo since 1952 and Study is no different, spending a good portion of its running time on lamplit scenes of thrusting daggers and bloodstained décolletage.

Cinematographer Desmond Dickinson – the veteran of such higher flown fare as The Rocking Horse Winner and Olivier’s Hamlet, lights up production designer Alex Vetchinsky’s sets with the ripe colors of a storybook bordello.

Those colors thrive in Mill Creek Entertainment’s Blu ray, a very nice looking presentation indeed – and hovering around nine bucks at internet stores everywhere, the bare-bones disc is a more than a bargain for aficionados of the singular sleuth.