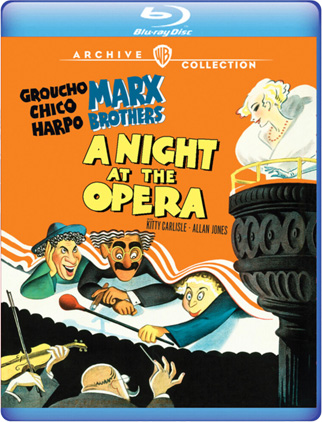 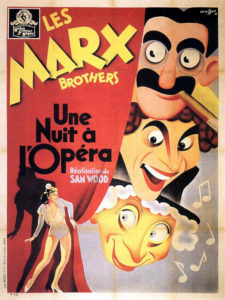 When the Marx Brothers bolted the scrappy but frugal Paramount for the gilded halls of Metro Goldwyn Mayer, fans of the comedians feared the worst—would the anarchic trio maintain their punk rock cred or had they sold out for the Top 40? The answer was revealed in their first go-round with the studio, 1935’s A Night at the Opera. And it was a standoff—though the Brothers remained world class provocateurs, MGM survived with its reputation intact and a big hit on their hands.

Opera‘s basic plot stays close to the Marxian blueprint; three agents of chaos, a fast-talking con man, a pun-happy piano player, and a tongue-tied hedonist, infiltrate a revered if musty institution, upend said institution, and go on their merry way. Though that premise fueled the Brothers’s comedies at Paramount, MGM still took the trouble to engage at least eight writers for their new employees—including an uncredited Buster Keaton, Jack Benny’s gagman, Al Boasberg, and Burt Kalmar and Harry Ruby, the screenwriters for Horse Feathers. When the dust cleared it fell to Pulitzer Prize winners George S. Kaufman and Morrie Rsykind to do the lion’s share of the work (the duo were already Marx alumni—Kaufman with 1925’s The Coconuts, and a team-up with Rsykind for 1928’s Animal Crackers). 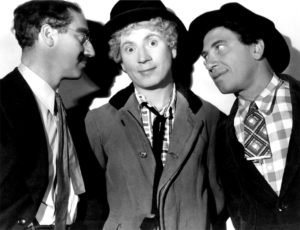 Overseeing Opera was Irving Thalberg, co-author of the Movie Production Code, generalissimo of MGM’s house style and the Marxes’s self-appointed hall monitor. Thalberg had already made sure that Kaufman and Ryskind would construct a traditional storyline rather than repeat the screw loose scenarios of their Paramount output and he upped the ante by hiring the trusty, if not exactly footloose, Sam Wood—best known for directing polished tearjerkers like Goodbye Mr. Chips and The Pride of the Yankees. Thalberg’s marching orders resonated throughout the production offices; gone were the joyfully nihilistic protest songs like Whatever It Is, I’m Against It, in their place were prosaic ballads like Arthur Fred’s Alone. Groucho’s distinctive jitterbugging was tossed for labored dance interludes staged in the grand MGM manner—even Harpo and Chico’s musical interludes took on the scale of an Astaire-Rogers number. And then there was the opera music itself—played and sung very straight by the film’s very straight romantic interests, Allan Jones and Kitty Carlisle (who remains chaste and unchased by Harpo). 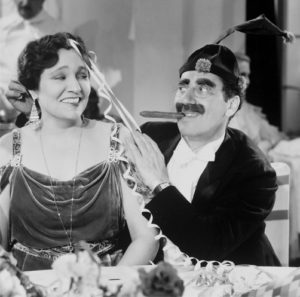 In some respects, the luxurious trappings, designed by Cedric Gibbons, work to the Brothers’s advantage—the glistening bric-a-brac and vaulted dining halls only accentuate the Marxes’s outsider status. Groucho plays Otis B. Driftwood, a flim-flam artiste who’s currently conning—once again—Margaret Dumont, who plays a wealthy dowager looking to extend her influence in high society. Harpo plays Tomasso, the dresser for the villain of the piece, an insufferable tenor named Rudolfo Lassparri who spends his off hours stalking Carlisle. Chico is Fiorello, the unofficial agent for a destitute singer named Ricardo Barone (Jones). They’re all aboard an ocean liner bound for New York and opening night at the opera where, after a few mad chases and some backstage shenanigans, the Brothers drop their pants and save the day. 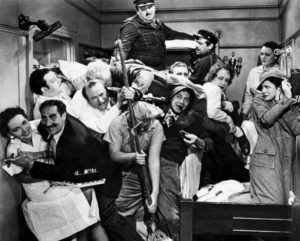 Even with the MGM guardrails in place, Minnie’s boys are in fine fettle, especially Groucho who woos Dumont with bizarro world logic; “I was with that other woman because she reminds me of you.” The brothers serve up several classic routines including the fabled contract negotiation between Groucho and Chico that centers around a “sanity clause” (presumably a reflection of the deal they just made with MGM) and the opera house finale in which Il Trovatore segues into Take Me Out to the Ballgame. The film’s centerpiece is a masterpiece—built on the premise, “you never know what is too much until you’ve seen it”, the sequence involves three Marx Brothers, one crooner and seventeen extras, including maids, waiters, manicurists, and one increasingly crowded stateroom. 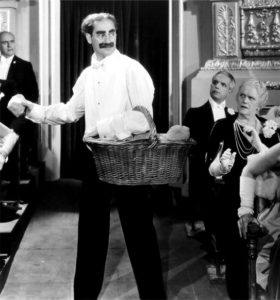 Thalberg was determined to make an epic Marx Brothers movie and for the most part he succeeded—though of the five films the trio ended up making for MGM, each has a glossy veneer that only gums up the works and kills the jokes. Though Groucho thought Opera was their best film, their relationship with the studio was short-lived. They followed up with A Day at the Races, left the studio and came back for At the Circus, Go West, and The Big Store.The laughs faded over time but MGM’s storied crews still put in the work, none more so than cinematographer Merritt B. Gerstad who made Opera look like a weekend at Xanadu (rather unexpected for the artist best known for 1932’s Freaks). Warner Archive has done Gerstad, Groucho, Chico, Harpo, and Irving proud. This is a beautiful new Blu ray and WA has included a healthy serving of extras.

First and foremost is the feature-length audio commentary from the formidable Leonard Maltin. Coming in a distant second is a half-hour segment from 2004, Remarks on Marx, featuring Carl Reiner, Robert B. Weide, and Larry Gelbart. A short clip from a 1961 Hy Gardner show has some historical interest;  Groucho tells the “real” story of how he and his brothers ended up naked in Irving Thalberg’s office. The jury is out as to whether any of it is true—but go ahead, print the legend. Rounding out the package are the original theatrical trailer and some unrelated but quite enjoyable vintage MGM shorts—one of Robert Benchley’s comic “how-to” instructional shorts, How to Sleep, a tourist fantasy about L.A. nightlife called Sunday Night at the Trocadero, and a bright Technicolor gem, Los Angeles: Wonder City of the West.