Ray Milland directs a fine western drama, strong on character and tension; it garnered enough praise to set him on a second, minor career behind the camera. Milland also stars as a gunman in the wrong place at the wrong time — framed for a mass murder in an unforgiving frontier town. Who ya gonna blame? That nasty sidewinder villain Raymond Burr, of course. 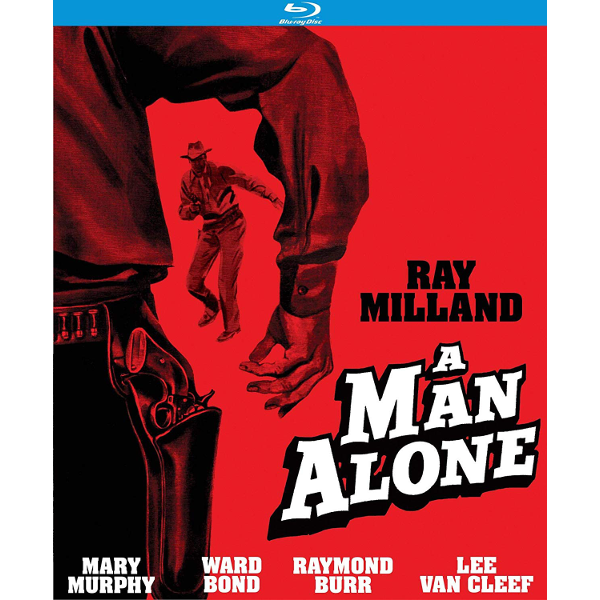 A Man Alone is yet another exceptional western from Republic Pictures. It seems unfair to slight the in-house studio talent, but too many Republic productions have a cookie-cutter feel, a sameness that sometimes makes a show from 1954 seem not that much different than one from 1938. Perhaps seeing his expiration date looming as an leading man, Ray Milland made the leap to directing with this small-scale but well-turned man-on-the-run sagebrush drama. He clearly put a lot of planning into his work — it’s a minor gem.

Gunslinger Wes Steele (Ray Milland) has to kill his horse out in the middle of the Arizona desert. He then comes upon the site of a stagecoach robbery only a few hours old; all the passengers were murdered. He takes one of the stage horses to ride into the town of Mesa, and is immediately attacked by an incompetent deputy, Jim Anderson (Alan Hale Jr.) As Steele has a gunfighting reputation, it’s assumed that he’s the murderer, even though the deed was done by thugs Clantin, Ortega and Sam (Lee Van Cleef, Martin Garralaga & Kim Spalding) hired by banker Stanley (Raymond Burr). The town searches desperately for Steele, who has already holed up in the basement of a private home. The owner turns out to be Sheriff Gil Corrigan (Ward Bond), who’s laid up with yellow fever. Corrigan’s daughter Nadine (Mary Murphy) comes across Steele in the basement; even though he at first threatens her, she doesn’t give him up to the town. In fact, as a day or so passes, she becomes attached to her secret boarder. As the town succumbs to lynching fever, encouraged by the unscrupulous Stanley, Steele and Nadine discover that her father’s record isn’t clean: in fact, he bears partial responsibility for the murders.

There’s a lot of good to report in A Man Alone. Even though he’s directing himself, Ray Milland does an excellent job, perhaps helped by the show’s intimate scale — for half of the film it’s just him alone on screen, or with his co-star Mary Murphy. For almost the first half-hour Milland’s character doesn’t even talk, which gives Milland a chance to show off his directing chops. Interestingly enough, just two years before he’d starred in the eccentric espionage thriller The Thief, a film with no spoken dialogue at all. 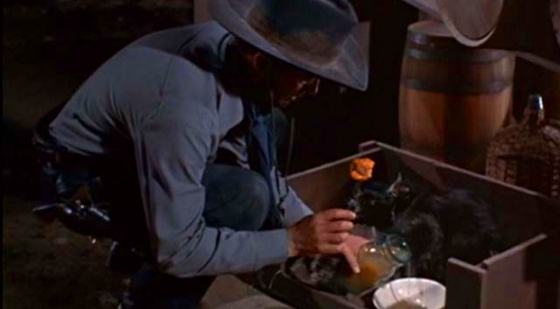 Ray Milland brought some key talent with him to Republic. Cameraman Lionel Lindon had shot Paramount’s Alias Nick Beal with Milland and was expert in both B&W and Technicolor; his excellent color work on this show was always noted in reviews, even though the prints were made with Republic’s in-house lab CFI’s Trucolor process. Victor Young had done some soundtrack work for Republic previous to this, and was scoring big with music assignments for prestigious shows (Three Coins in the Fountain, The Country Girl) and hit songs (When I Fall in Love).

John Tucker Battle’s screenplay is also atypical for Republic, both for its in-close subjectivity to Wes Steele’s experience, and its anti-authoritarian viewpoint. Instead of reinforcing the status quo with a simplistic Republic town, A Man Alone presents a frontier burg that’s rotten to the core. The business leader is a thief and a murderer, and the top law enforcer is in his pocket. The citizenry is a trigger-happy lynch mob. The general setup is more like a subversive film noir (The Lawless, for example) than a Roy Rogers picture. The bad guys, the real murderers, are the ones promoting an extra-legal killing of an innocent to cover their crime. Yep, that’s the America I wish I didn’t know. Writer battle also wrote the original story for the 1953 Invaders from Mars.

The citizens of Mesa are given unexpected nuances. Milland’s rootless gunman yearns to settle down, and is impressed by the homey touches Nadine has added to the house he hides in. When Wes hides out in the basement, he feeds a cat, a gesture that comes off as natural, not a ploy for easy sympathy. Milland is 24 years older than his leading lady, yet the age disparity is not jarring. Mary Murphy’s Nadine is more complicated than a typical Republic frontier woman. Her career has contours similar to that of other talented actresses in the postwar years — many tiny parts and but not enough opportunities to get attention. Murphy should have had a huge boost after playing opposite Marlon Brando on The Wild One, but something didn’t click. Did she not have a good agent? Was she stuck in a contract that restricted what jobs she could take?

Ward Bond also gets a chance at a more substantial character than usual — he’s a widower trying to do the best for his daughter, while also keeping her in an emotional prison. His respected Sheriff is revealed as a compromised crook, a man on the take, something that Bond makes wholly credible. His character arc is actually more interesting than that of Milland’s hero.

The able support crew is led by Raymond Burr’s venal hypocrite Stanley, the stock baddie of the story. Henchman Lee Van Cleef is a competent creep following orders, while Kim Spalding’s dissenting, drunken bad guy is a surprising touch. Spalding’s acting isn’t much better than his best known part three years later in the sci-fi picture It! The Terror from Beyond Space.

Arthur Space’s town doctor is very well sketched, both in the scripting and in performance. The doctor knows something isn’t right in the Corrigan household, and telegraphs that something is amiss regarding the Sheriff’s honesty. That the doctor and the Sheriff work out a moral agreement to handle the problem seems very mature — gunplay resolves some of the story but most of it is character-driven. Milland’s direction doesn’t flag when it comes time to handle crowds. The mob that gathers at the finish to lynch Wes feels properly motivated, especially when ‘steered’ into a hanging mood by Raymond Burr’s men, the actual murderers.

Cameraman Lionel Lindon helps Milland capture the beauty of locations in Utah (the St. George region) and Arizona that account for only a few minutes’ screen time. The detail work is excellent. Mesa in the dead of night is very convincing. Wes arrives during a sandstorm that buries much of the town in mini-drifts and dunes, a very nice touch. Much of the story is restricted to the Sheriff’s basement and house yet we don’t feel claustrophobic. Fine art direction and Lindon’s expressive lighting keep things interesting. The contrast with the usual high-key, one-angle-fits-all average Republic show is dramatic. The modest A Man Alone might not be an auteurist classic like Republic’s Johnny Guitar of the previous year, but it’s a wholly entertaining, involving drama. 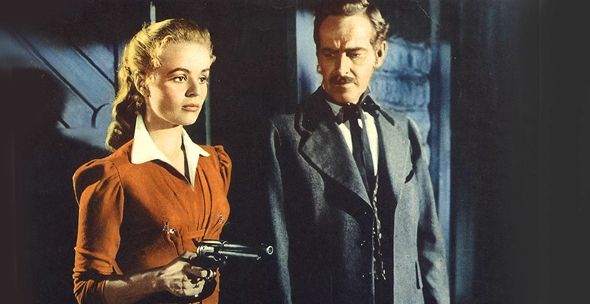 The KL Studio Classics Blu-ray of A Man Alone looks terrific, with rich color that might be better than original Trucolor prints: the original negative was ordinary Eastmancolor. In general Republic has taken excellent care of their library, and I see no evidence of fading or damage. Victor Young’s score comes across well, too. Note: none of the images seen here properly represent the excellent colors on the disc.

The release is enhanced by Toby Roan’s detailed audio commentary. Roan has a lot to say about the film’s genesis and Ray Milland’s urge to move into directing. Roan also did a commentary for Milland’s second directing effort Lisbon, released by Kino at the same time. That non-western is such a strange production, shot on a distant location, that there was more of interest to talk about. A Man Alone was largely filmed on the Republic lot, so we do get perhaps too many long lists of credits for everybody who appears on screen. Roan has the lowdown on every first- and secondary supporting actor we see. 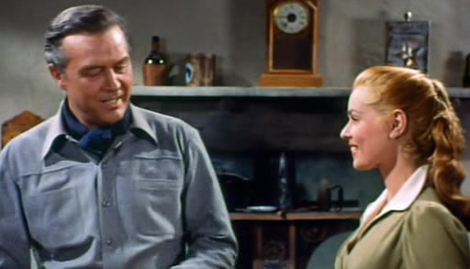 Ray Milland directed five feature films with varying success; he played a role in all of them, so when time was tight or a production was strained (as with Lisbon) the quality of his own performance sometimes suffers. The Safecracker and Hostile Witness don’t have particularly promising scripts, which leaves us to admire Milland’s skill at getting a releasable picture in the can. His most ambitious movie is Panic in Year Zero!, a science fiction thriller with an unbreakable story. Even with an inadequate production, iffy casting, bad music choices and Milland sometimes unable to gauge his own performance, it’s quite an achievement. A Man Alone is a much simpler affair, yet is Milland’s best-directed movie overall.

Along with Lisbon, Strangers in the Night, Hell’s Half Acre, Moonrise and some other titles, A Man Alone was resurrected for Republic Rediscovered, a 2017 screening series of forgotten Republic Pictures gems at the Museum of Modern Art. I hope that Kino or another label gets around to the Republic adventure fantasy Fair Wind to Java, with Fred MacMurray. I want to know if it is exciting as I thought it was the last time I saw it … at age ten.