Robert Wagner as a social climbing psycho killer?  I knew it!  ‘Mr. CinemaScope Smile’ grins only once or twice in this movie, and then only to fool an unsuspecting woman. A great cast brings tension to Ira Levin’s outrageous tale of murder. Joanne Woodward has a powerful role, but this time out my heart throbs for lovely Virginia Leith. 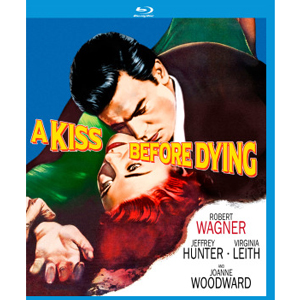 It’s a safe bet that a huge chunk of Americans now identify Robert Wagner as the father of Anthony DiNozzo on TV’s NCIS. But he’s been acting for 65 years — even longer than David McCallum. In the 1950s Wagner was the darling of the Fox lot, a green kid who cruised through no-stress showcase roles for almost the entire decade. But that’s not the whole truth. Wagner did get opportunities to play more demanding parts, including the new brand of psycho killer that doesn’t normally look or act crazy. In A Kiss Before Dying Wagner is an impoverished college kid seeking a quick way to the Good Life. We can tell that it’s a change of pace for Wagner because he doesn’t flash his signature smile until forty minutes into the picture. His character is a calculating rat with a talent for manipulating women, and he’s willing to spend innocent lives to get what he wants.

Still a snappy murder thriller,  A Kiss Before Dying rose in my estimation after seeing it in HD. It has some good characterizations and okay acting from a group of what were then called ‘promising studio youngsters.’ The most modern thing about the show is its unusually ruthless attitude. The screenplay doesn’t make excuses for its villain, as he’s neither a teen rebel nor a deserving underdog.

In college on the GI Bill, Korean War veteran Bud Corliss (Robert Wagner) plans to marry his way into the rich Kingship family, which owns a vast copper mine just outside Tucson. But it looks as if his girlfriend Dorie Kingship (Joanne Woodward) has become permanently estranged from her domineering father, Leo (George Macready), the man with all the money. Bud is plotting his next move when Dorie announces that she’s pregnant. He assures her that they’ll be married immediately — a promise inconsistent with his selfish behavior.

Even the trailer for A Kiss Before Dying compares the show to George Stevens’ A Place in the Sun, a tragedy about a far more sympathetic poor boy who falls victim to a moment of ambition. Bud Corliss is a monstrous version of the same character, a man who has looks and brains, and the desire to outsmart his way into a cozy lifestyle. He’ll do anything it takes to achieve this, including committing two ghastly killings. Robert Wagner nails the part, leaving us with no doubt that the outwardly charming Bud is capable of such deeds. He broods and schemes and does a lot of sneaking around to arrange a suicide note and steal arsenic from a school lab. Bud is also perfectly rotten to his hardworking mother. As played by Mary Astor, the mother seems aware of her son’s strong streak of insincerity. Given just a couple of scenes, Astor is excellent. Sixteen years before she was one of the screen’s most famous femme fatales in The Maltese Falcon.

The film is divided roughly at the 34-minute mark, when several more characters come into play. Second-billed Jeffrey Hunter is Gordon, Dorie’s math tutor; he also helps out for his uncle in the police department, an awkward arrangement that would suggest that the movie folded two book characters into one. Hunter is supposed to be gentlemanly and bookish, and is set up as a romantic alternative for Wagner with both women. Given what happens in the movie, we wonder why Gordon doesn’t have to account for his own movements on the day of the murder. Hunter and Wagner would later star together in Nicholas Ray’s weak juvenile delinquency-outlaw movie, The True Story of Jesse James.

Virginia Leith is Dorie’s sister Ellen, a beautiful copper heiress who spends the second half of the show trying to establish that a murder has taken place. Ellen is less vulnerable than her sister, but she has the same problem that Dorie had, a domineering father (George Macready). With with her deep voice and graceful bearing Ms. Leith is an interesting presence. A former model, she won several big parts in enduring films, but didn’t catch on with the public. She had already played opposite Robert Wagner once, when both were at Fox. I’m betting that Ms. Leith had an interesting personality that wasn’t given free rein in her movies. Her role in Black Widow shows hints of a nonconformist spirit.

In either her first or second film is Joanne Woodward, who will soon become the film’s biggest star. Clearly set up to be murdered in the first part of the story, her Dorie remains sympathetic even as she fails to heed any of the 101 danger signals broadcast by her dreamboat boyfriend. Woodward handles the role of an inconveniently pregnant woman with dignity — her Dorie needs support but never whines. Two years later Woodward would marry Paul Newman and establish a mini-acting dynasty; it’s interesting to compare her role opposite Robert Wagner in this movie, to Wagner’s role as ‘guest-lover’ in the later Newman-Woodward car racing drama, Winning.

Virginia Leith’s feature acting career ended in just a couple of years. She’s now most famous for a final footnote role that became a legend, in the cult favorite The Brain that Wouldn’t Die. The show may be absurd, but Ms. Leith is excellent in it.

I’ve already mentioned Mary Astor; George Macready is his usual creepy self as the copper magnate who likes to boss people around and is willing to disavow his own daughter for social reasons. Macready’s somewhat stiff performance somehow seems appropriate; by the finish he’s become a sympathetic father. Future American-International star Robert Quarry has a good little part as a student tennis star who unfortunately crosses the path of the diabolical Bud Corliss.

Most everyone notices that the movie eerily predates Alfred Hitchcock’s Psycho. A surprise death brings the story to a full stop, whereupon the thread is picked up by a sister determined to investigate. The movie even begins with a pair of unhappy lovers together on an unglamorous bed. In Hitchcock’s film, though, the heroine was a major star, so nobody seriously believed she’d make an abrupt exit only a half-hour into the feature. As Dorie, Woodward wears a very short hairstyle, that might remind viewers of Ingrid Bergman, Janet Leigh, or maybe even Gaby Rodgers, depending on what one has seen.

Director Gerd Oswald is perhaps best known for his classic The Outer Limits episodes; this is his first feature film. I would also recommend his second film noir, Crime of Passion with Barbara Stanwyck and Sterling Hayden. Oswald works up some expressive camera angles for tense scenes, and when Bud and then Ellen go prowling at night. A Kiss Before Dying made its reputation with a single violent moment, which for a mainstream melodrama of 1956 really carried a sting. The film’s refusal to ‘explain away’ Bud’s malevolent behavior was not the norm in ’56. It’s this harshness and unredeemable aspect of Bud Corliss that allies Kiss with late-period film noir. The novel was apparently Ira Levin’s first film sale. He’d later really clean up with two bestsellers and their film adaptations, Rosemary’s Baby and The Stepford Wives.

The KL Studio Classics Blu-ray of A Kiss Before Dying is a big improvement on the old (2002) MGM DVD. The jazzy title sequence, with hot letters and lips on black, could almost be for a romantic comedy. The HD image is strong and colorful throughout, with the exception of part of a reel in the middle, in which the source has faded unevenly — the colors pulse slowly between warm and cold. Ms. Leith’s cheeks keep changing from rosy pink to a colder bluish. I noted this same flaw with the earlier disc, so I suppose it’s possible that they’re the same transfer. In both discs an identical jump cut occurs near the end, during a shot with a giant steam shovel.

It was a coup for producer Robert L. Jacks to secure the artistic cameraman Lucien Ballard, who in the ’30s had worked with Josef von Sternberg. After a decade of cheap pix Ballard climbed back to the top of his profession at Fox. He collaborated with the greats — Stanley Kubrick, Budd Boetticher, Henry Hathaway, Sam Peckinpah. Ballard makes good use of the ‘Scope frame in the exteriors, but his garish night lighting is even better. Many setups look like the glossy, trashy covers of ’50s crime novels. Ballard either insisted on a good set of CinemaScope lenses, or was more cautious in adjusting them– I saw only one instance of field distortion, and no ‘CinemaScope mumps.’

The Nelson Riddle jazz score sounds fine, although the tracks get a little noisy at times. Lionel Newman’s title tune is heard as a vocal at one point, rather ineptly — the lyric, “A kiss before dying…” seems to be giving Bud Corliss an inspiration.

The trailer has a nonstop narration hyping the movie. It also ends by giving away the film’s key shock scene, so don’t watch it before the feature. Two final notes: reader Richard McQuillan identified “the” building in the movie as the Bank One Building, on the corner of Congress and Stone streets In Tucson, about a mile from the University of Arizona. Second note: The new Blu-ray has no foreign languages or subtitles. Seeing A Kiss Before Dying for the first time in HD, I noticed that at the very end, Jeffrey Hunter and Virginia Leith exchange a brief bit of dialogue that has been dropped, either on purpose or by accident. Hunter offers her a handkerchief. We see their lips flap, but no sound comes out. To me it looked as if Leith might be saying, “I still love him.”

Then I got the idea of accessing the Spanish track on the old DVD. Sure enough, the two short lines are retained there. Translation: Hunter: “Take it, you’re crying.” Leith: “But not for him.”

This missing dialogue would be so obvious on the big screen, that my guess is that somewhere along the line, United Artists accidentally dropped it when compositing a new track master from the music, effects and dialog stems. A continuity script would clear this up.