Clark Gable is still sufficiently frisky in this late career western to attract four well-chosen frontier women — who in this case happen to be a quartet of robbers’ wives, sitting on a rumored mountain of ill-gotten gains. Raoul Walsh abets the comedy-drama, as Gable’s fox-in-a-henhouse tries to determine which hen can lead him to the promised golden eggs. 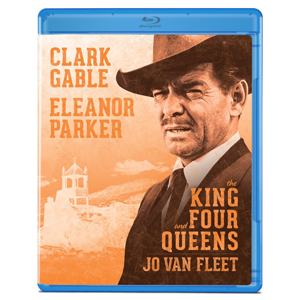 Olive’s latest dip into MGM’s United Artists holdings brings up the cheerful, not particularly distinguished western The King and Four Queens from 1956. Partly produced by its star Clark Gable, the show matches “The King of Hollywood” with five leading ladies. Gable’s second outing with veteran director Raoul Walsh has a clever concept but only a so-so script finish. It relies on its fetching cast to keep our attention. 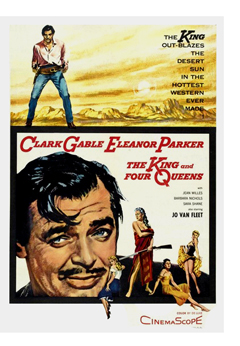 We’re greeted by the bright exterior cinematography of ace cameraman Lucien Ballard, as a lone rider is pursued across the desert scrubland. Gambler-drifter Dan Kehoe (Clark Gable) learns of five women living by themselves at a lonely ranch called Wagon Mound. Ma McDade (Jo Van Fleet) shoots trespassers; it’s well known that her absent sons were bank robbers. The sons’ four young brides have been awaiting the return of one of the surviving husband for two years, even though they don’t know which one. Sabina (Eleanor Parker) is quiet and smart, Ruby from El Paso (Jean Willes) is a ‘hot-blooded’ Mexican, Birdie (Barbara Nichols) a showgirl from Chicago and Oralie (Sara Shane) a devout blonde who married too young. The girls are convinced that none of the husbands are coming home, but Ma’s not having any of that defeatist talk. The part of the story that interests Dan Kehoe is the McDade treasure — Ma McDade is said to be guarding $100,000 dollars in stolen money.

Pretending to be on the run from the law, Dan enters the ranch. Ma hits him with a rifle shot, and the girls insist that he become a visitor while his wound heals. The sultry Ruby appeals directly to the handsome stranger, while the ex- dance hall entertainer Birdie tries to attract his attention with revealing costumes. Oralie is shy but interested, and Sabina is the most patient. Ma insists that the girls remain faithful to their missing husbands, but each is more interested in getting the stubborn matriarch to reveal where the treasure is buried. Let’s call The King and Four Queens a far lighter, more glamorous version of Clint Eastwood’s The Beguiled, with less desperation and no poisoned mushrooms.

Being the wives of desperate outlaws, more than one of the women has a sneaky plan to steal away with both the loot and the man. The self-confident Dan has little choice but to play along with his hostesses’ catty, sneaky games. Thankfully, somebody used superb taste when signing the four Queens — Clark Gable may have been at the far end of his appeal as a leading man, but with women of this caliber attracted to him, he still seems the most desirable male in Hollywood. 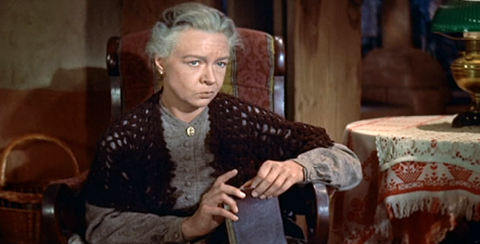 Stealing the show outright is Jo Van Fleet, the great stage actress whose late ’50s film career saw her playing other crusty older dames for Elia Kazan in East of Eden and Wild River. Ma McDade has some things in common with Margaret Wycherly’s Ma Jarrott in Raoul Walsh’s White Heat from nine years previous – she’s just as loyal to her outlaw sons, riding herd over the love-itchy women they left behind. But Ma McDade is basically sane, not a madwoman.

The remarkable Ms. Van Fleet is only 41 in this film, fifteen years younger than Clark Gable and not that much older than the other actresses. In this same year she showed up in Gunfight at the O.K. Corral not playing ‘over 55’, and we almost didn’t recognize her.

Barbara Nichols (Sweet Smell of Success) plays her standard bird-brained floozy, and is even given the name Birdie. Most viewers of my age discovered Nichols in the musical The Pajama Game, where she’s still the innocent sweetheart; after Sweet Smell she’d continue playing various kinds of ‘experienced’ women, sometimes disillusioned but almost always typed as ‘easy.’ Nichols is hilarious in Dear Heart, as a hotel concessionaire seemingly open to any reasonable offer of sex companionship. 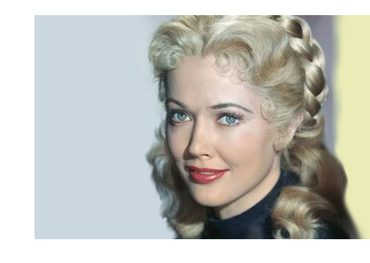 Sara Shane is the most obscure actress in the bunch. As Oralie she possesses an utterly beguiling smile but the character has difficulty asserting herself. Oralie gets the least attention of the four women, which is a shame because Ms. Shane is such a strong personality elsewhere. The film in which to see her at her best is in the excellent Gordon Scott movie Tarzan’s Greatest Adventure. Sara plays an adventuresome woman with spirit, who doesn’t need to be rescued. She matches Tarzan for bravado and joins in the action as an equal. I was sorry to see so few credits for the actress; the movies blew it by not promoting her. Shane epitomizes a ’50s ideal of blonde beauty, but her photos don’t reveal her bright personality. Neither does her role in this picture, not really.

Busy actress Jean Willes (Invasion of the Body Snatchers) pours herself into a red dress and smokes a cheroot to seduce Gable’s rogue male. Ms. Willes excels in supporting parts ranging from severe to sexy, but I don’t know of her being given any leading roles in movies. She sometimes seems to be chosen because she is not likely to upstage a female star — she has a harder look than, say, Jane Russell, and she often plays sensible women. A good example is her bit as the tough ticket seller at the Honolulu men’s club in From Here to Eternity. Ms. Willes makes Kim Novak look ‘softer’ in 5 Against the House, and Jane Russell look softer in Raoul Walsh’s The Revolt of Mamie Stover. In 1956, the remarkably prolific Ms. Willes appeared in five movies and ten TV shows.

The film’s billing order eliminates most of the film’s suspense. Dan Kehoe, of course, chooses the one McDade woman that doesn’t throw herself at him. Established star Eleanor Parker (The Man with the Golden Arm, Detective Story) is the one Queen in the deck big enough to share equal billing with Clark Gable. Her calculating Sabina is the bride most willing to level with Dan about the mysterious treasure. As the most mature of the four, Sabina is sort of a crooked Jo March figure at the forefront of a score of a different kind of Little Women.

The King and Four Queens wants to be a full-on farce, but the script instead takes its-fox in-the-henhouse situation at face value. As this is 1956 and the Production Code is in full force, Clark Gable’s handsome Dan Kehoe allows each of the four babes to dally with him according to their personal styles, while the sour-faced Ma sits with her rifle and an itchy trigger finger. Dan engages in little more than kissing with each of the four wives, depending on how we interpret a couple of scene fade-outs. What could have been a sexy romp is simply too restrained. The show is amusing, but doesn’t fully exploit its potential.

The script does make use of a few telling role reversal situations. Dan Kehoe is caught bathing naked in a pond, a ritual usually reserved for the leading lady. Birdie arrives, and instead of hiding Dan’s clothing, she hurries to undress and join him! Naturally, one of the other McDade brides intervenes. Good taste and the Production Code prevail, along with an unwillingness to make The King and Four Queens an outright comedy.

Director Raoul Walsh is no longer the dynamic director he was just a few years before, and doesn’t shape the material as well as he did his classics for movie stars like Humphrey Bogart and James Cagney. It’s likely that Walsh’s main effort on The King and Four Queens was to get the film in the can as efficiently as he could — it’s clearly not a high budget production. Adopting a relaxed approach, he often leaves the CinemaScope frame loose and wide. The problem is surely the changes in the business more than Walsh’s doing; his next movie Band of Angels also stars Clark Gable, and is a taste-challenged disaster. The director’s ’50s work is always more than competent. He seems more into the spirit of the later, much broader comedy western The Sheriff of Fractured Jaw, Jayne Mansfield’s last studio picture.

We wonder what Billy Wilder might have done with the situation of four sex-starved beauties confronted with the desirable Clark Gable; it sounds like a setup for one of Wilder’s dirty joke movies: ‘Kiss Me, Outlaw?’ Four Queens instead settles for conventional character twists and a subdued, non-violent conclusion. It’s sweet and stress-free, but it could have used a more compelling dramatic finale, or bigger laughs. 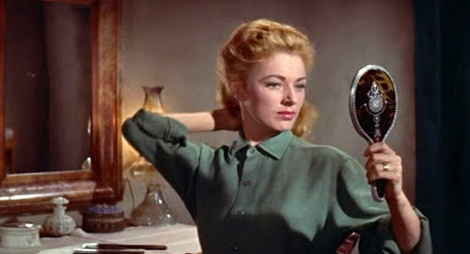 Olive Films’ Blu-ray of The King and Four Queens is a good encoding of this relaxing, amusing western. The old MGM DVD was on the blah side but this transfer snaps, with excellent color. The video colorists match the optical dissolve sections well, even though we can see them going a little soft. The attractive sets are by the interesting designer Wiard Ihnen – once we go inside, Ma McDade’s desert ‘shack’ is spacious and accommodating. It looks as though one or more of Ballard’s CinemaScope lenses weren’t properly adjusted, as many shots feature vertical lines that lean to the left or the right — doorways, support posts, etc.

Since Raoul Walsh frames much of the film fairly widely, the added resolution of HD is a big boost — we can read more expression in the actresses’ faces, even in the wide shots. A movie that seemed a bit remote on old TV broadcasts is now more engaging. The audio is full and rich but I noticed on my machine that parts of two reels were slightly out of synch. I don’t stress that because not all players may play the tracks the same way. Alex North’s bold soundtrack music opens the film well, and provides a hearty square dance for the central scene in which Kehoe doe-see-do’s with all four women at once.

The original trailer is included. The design of the cover art is weak, but perhaps a large image of Clark Gable is the right way to go, now that all of his costars will be known only to film and theater buffs. The movie also suffers from a lack of good production stills. Good going, Olive — thanks for the English subtitles.