The Fab Four’s first and biggest movie hit comes to 4K Ultra HD!  The Beatles brought something new and exciting to 1964 and the world embraced it. This United Artists release was a major event in the first wave of Beatlemania, setting the standard for Swinging London cool; thanks to Richard Lester’s flip approach and the Beatles’ positive energy little in the movie has dated. George Martin’s input for the musical end of things didn’t hurt either. The movie itself never gets old: new generations still respond with enthusiasm. It always looked super on home video, so what does the format boost add to the mix? 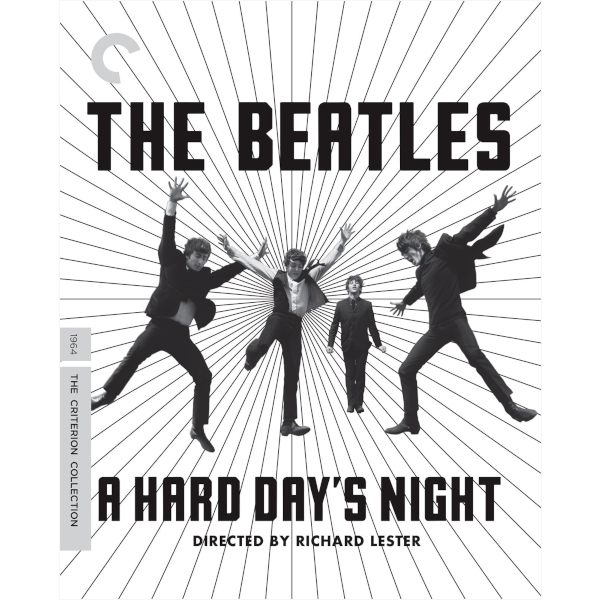 How great that director Richard Lester is still with us — he gives us some continuity with this liberating ‘Beatlemania’ wonderment film. It began as an iffy promotional requirement but became the spearhead for fandom. Just seven or eight months after we pre-teen kids leaned of the existence of The Beatles, there they were bigger than life with the music blasting out at us louder than any of us dared play our 45rpm records. A Hard Day’s Night has been no stranger to disc, and Criterion’s 2013 Blu-ray is excellent. What does 4K Ultra-HD add to the experience? 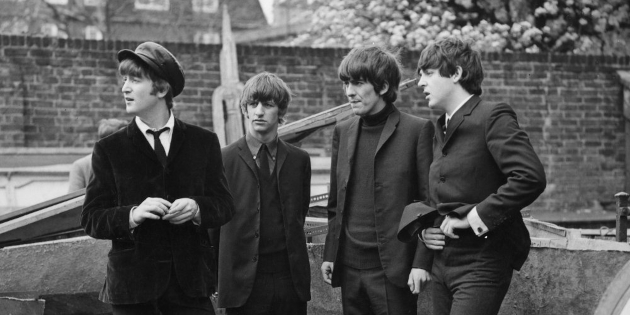 Everyone under age 25 seemed to be a Beatles fan in 1964. The big wave hit America hard and fast early in the year. The four British ‘lads’ were a breath of fresh air, a welcome break from a recent assassination and a nuclear standoff. Their songs were rich with melody and the ‘new sound’ that we didn’t expect from England. We were hungry for every snippet of B&W news footage of the Beatles smiling and making clever jokes in their unique suits and mop top haircuts. They just plain could do no wrong, as if they held the copyright on fun and happiness. For Gods such as these movie stardom couldn’t be far off.

A Hard Day’s Night turned out to be one of the happiest movie deals of the 1960s. David Picker signed for United Artists barely knowing what he was getting into, and the deal was closed so quickly that UA ceded ultimate ownership to producer Walter Shenson. But the choice of director was ideal for all parties. The Beatles had no intention of making a standard rock ‘n’ roll exploitation picture of the time. For every Jailhouse Rock, four major embarrassments showed unhappy singers lip-synching to playback and sharing the stage with whatever pop act the record companies were pushing that year. The Beatles were particularly allergic to the way musical talent was packaged and marketed, as with Cliff Richard. American director Richard Lester had worked with The Goons and Peter Sellers, and the Beatles approved of his anarchic approach to comedy. Working with a script by Alun Owen, a writer familiar with Liverpool argot, Lester fashioned a ‘day in the life’ farce that combined convincing newsreel-like action with a satire of London’s pop music culture. Viewers got plenty of privileged time to hang out with the four most admired young men in the world. 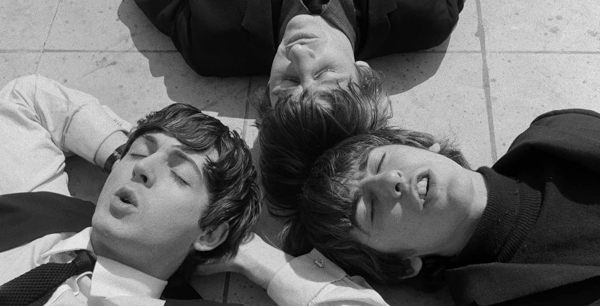 Although scripted, A Hard Day’s Night is so freely structured that audiences thought the Beatles were making it up as they went along. The Fab Four avoid teeming mobs of teenaged girls, attend parties, give reporters grief and amuse each other in hotels and on trains. They play with their public personalities, ratcheted up three notches in cleverness. The script invents a grandfather (Wilfred Brambell) for Paul, a crotchety gentleman who causes trouble with petty side hustles. Ringo becomes melancholy and wanders off just as rehearsals for a big television performance get underway. The neurotic Telly director comes unglued — will they make it back to the studio by airtime?

There’s nothing quite like this film: it’s hard to imagine a better way to introduce the Beatles to the mass audience. The show often takes on the look of a verité documentary, but with a cutting style that captures perfectly the Beatles’ impish sense of humor and effusive spontaneity. The lads give their minders headaches while tormenting (in good fun) the fussy BBC types preparing a video concert. Although never as bleakly absurd as a Goon skit the comedy draws upon silent-movie slapstick and silliness,  always in the service of character. Some of the Beatles’ interactions with passersby are inspired, such as John’s impromptu faux love scene in a narrow hallway with an actress (Anna Quayle ↓ ). Richard Lester indulges in many sidebar gags such as the car thief ignored by the Bobbies that dash about like Keystone Cops. As if realizing that a break from the hectic pace would be a good thing, director Lester takes time out for the slower sequence in which a lonely Ringo wanders down by the riverbank. Without his mates he’s just another sad-faced bloke. The movie gave the new sensations a stunning new visual approach and an anarchic line of comedy that Lester refined in his follow-up romantic comedy The Knack … and How to Get It. 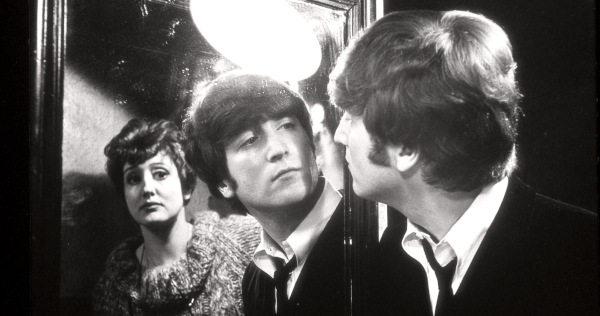 The musical interludes are placed with care and taste. The first is the most daring — the boys are playing cards in a train’s baggage car when one of their songs is heard. Across a cut they’ve suddenly unpacked their equipment and are performing to a small audience of fans peering through a wire mesh fence. Reality switches back and forth without warning but it all seems perfectly natural. Other songs are heard as quasi- rehearsals, open performances, instrumentals played over appropriate sequences — and the revolutionary “Can’t Buy Me Love” sequence, that compresses a year’s energy into a music video-like playground romp. George Martin arranged a half-dozen instrumental cuts that would now be classified as easy listening covers. The best is Martin’s arrangement of “This Boy”, which becomes a theme for Ringo. The big fireworks arrive in a finale in which The Beatles perform for a hall packed with screaming teenage girls. Brilliantly edited, it fully expressed Beatlemania hysteria. American kids yelled and cheered in film screenings as well. What can I say — I was one of them.

A Hard Day’s Night made us think we were privy to the ‘true’ personalities of the Beatles. Today an entire PR company would be in charge of the ‘spin’ given the Beatles’ image, but in this movie those decisions seem to have been arrived at by pure professional insight. The boys are mostly kept away from their hordes of star-crazed fans, leaving their status vaguely ‘available.’  No girlfriends (or wives) are in evidence to make the average female fan feel resentful or inadequate. The tearful, hysterical girls that pour out their hearts screaming at the finale are a phenomenon that no celebrity could deal with, so the only recourse was to remain remote Gods of music. The movies had scrubbed and flattened Elvis into a boring self-parody, but with intuitive marketing savvy (no committee, no focus group) the Beatles’ renown was instantaneously amplified tenfold. United Artists got an incredible bargain and the Beatles became superstars bigger than anything Hollywood had seen in decades.

The hotel staff, reporters, and television personnel are wildlife naturally found in the Beatles’ habitat. Amusing Wilfrid Brambell gets equal attention, and luckily isn’t too distracting. His character gives the boys someone to bounce off of and argue with. Grandfather’s sour, caustic attitude also provides a baseline to insure that the Beatles’ constant snippy remarks don’t come off as cynical.  A neurotic fashion exec (Kenneth Haigh) doesn’t recognize George and tries to squeeze him as a resource for ‘what the kids think.’  The scene shows the Beatles transcending marketing hogwash mainly by ignoring it. George is soon shown the door but not before introducing a new word to our lexicon: grotty.

The movie is perhaps the greatest national advertisement England ever exported. To us that island looked like Utopia. The police were sweet and thoughtful. Everyone was into rock music (sure they were…) and Youth seemed to rule all. America was hungry for more. American fans were given their first chance to see what the Beatles were like. They were differentiated by category: the cute one, the cool one, the quiet one and the funny one. With modifications, their public images stayed the same throughout their careers, even if The Beatles soon evolved beyond the personalities so firmly established here.

The Criterion Collection’s 4K Ultra-HD + Blu-ray of  A Hard Day’s Night 4K is best rendering yet of the B&W British docu-drama look on home video. The monochrome images of Gilbert Taylor (Dr. Strangelove, Star Wars) perfectly expose the soft London light — no bright sunlit shadows. Darker scenes have that Ilford Film contrast, always striking but not harsh or blocked-up. Don’t be fooled by the added granularity in the opening titles — those scenes are an optical dupe, another generation away from the original negative.

I would say that the new remastered 4K job has the edge on the older Blu-ray, but not by much, and the difference is only apparent on a higher-end large monitor or projection setup. It’s really for Home Theater folk, or those with 65″ TVs that can see the (slight) improvement. Experts can point to the finer grain and much wider contrast, but one would have to be an extremely discriminating viewer to judge. If you don’t have this title yet, I’d go for it — in five years home theater-grade monitors & projectors may be even more affordable than they are now.

The new 4K digital restoration was approved by Richard Lester. The UHD disc and Blu-ray carries three audio options: origina monaural, 2.0 stereo and 5.1 surround mixes. The edition carries one 4K UHD feature disc in Dolby Vision HDR and one Blu-ray with the feature and the special features. Also available as a free-standing Blu-ray and as a DVD, although the DVD includes fewer extras.

The extras appear to replicate the contents of the earlier special edition (2014) exactly. A 2002 commentary offers memories of the filming from a selection of the cast and various crew members. The short docu featurettes are excellent. In Their Own Voices (18 minutes) edits interview material with the Beatles to produce a montage of opinions on the making of the film. You Can’t Do That is a 1994 anniversary docu that includes an outtake of a Beatles song. Things They Said Today is a nicely assembled compendium of interviews, stills and clips and is also from the 2002 DVD. No Beatles music is heard. Helpful little arrows identify marginal actors and personalities in the clips. Richard Lester has the best quote:

“They told me I was the father of MTV. I wrote back and demanded a blood test.”

For Anatomy of a Style a story editor and music editor discuss the treatment of the film’s musical sequences. Picturewise is a thoughtful video essay on Richard Lester by David Cairns, narrated by Rita Tushingham. Beatles biographer Mark Lewisohn’s The Road to A Hard Day’s Night is an excellent, concise history of the quartet from their teenaged beginnings up until the production of their first movie. The final video extra is Lester’s Oscar-nominated The Running Jumping & Standing Still Film (1960), a short comedy made with The Goons. Two reissue trailers are included as well.