Everyday Noir in Prague: a one-of-a-kind Czech/Brit coproduction teams fine British actors (Anne Heywood, James Booth, Sir Donald Wolfit) with the home-grown star Rudolf Hrusínský, and the result is neither murder nor mayhem, but a real everyday tragedy that might happen anywhere. The bright B&W images chart an unhappy illicit romance, and a petty crime with awful consequences. 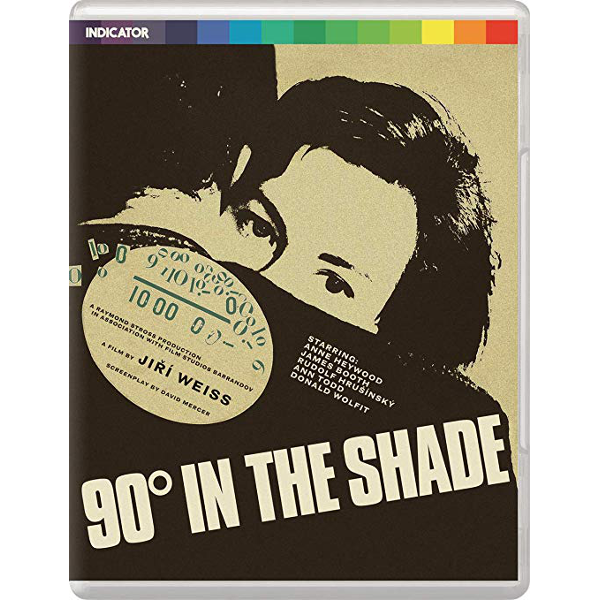 (note: a Czech friend who long ago helped me with research for Ikarie XB-1 advised me not to even TRY spelling Czech with full diacritical remarks. I encourage him to keep laughing at my efforts.)

Billy Wilder and Raymond Chandler once wrote that a murder pact is a one-way ride to the cemetery, but in real life nothing as glamorous as murder is required to produce the same result. The unusual Czech-Brit coproduction 90° in the Shade was filmed in Prague in two separate versions. The English language cut is longer than the Czech language version Tricet jedna ve stínu. Producer Raymond Stross was married to actress Anne Heywood, and helped fashion shows like The Night Fighters and The Fox to showcase her talent; for a time Heywood was on the quality list of ‘sexy’ screen sirens.

Stross also lined up James Booth, who had just broken through with a showy supporting part in Cy Endfield’s Zulu, and would continue as a solid character actor, as in Peter Yates’ Robbery.

The big surprise is Donald Wolfit, the famed BIG actor mainly known in America as an imperious British officer in Lawrence of Arabia and as the inspiration for Albert Finney’s character in Peter Yates’ The Dresser. Fantasy fans unfortunately remember Wolfit’s outrageous overplaying, in the horror picture Blood of the Vampire and the sci-fi opus Satellite in the Sky. In 90° Wolfit seems a totally different person, playing a garrulous but inoffensive shopworker.

90° in the Shade takes place in a hot summer in Prague, where trouble brews in a deli that’s but one outlet in a chain of shops. The manager Vorell (James Booth) is caught short when a company auditor shows up to do an inventory. Vorell has been playing games with his stock of expensive liquor, which almost never sells. To stall the inventory-taking, he invents a fake power outage. He then spends the night driving all over Prague with his shop assistant (and mistress) Alena (Anne Heywood), trying to buy up replacement stock. The other employees, including the pleasant but outspoken Bazant (Donald Wolfit) know nothing of the deception, but Alena has shared Vorell’s secret. But she doesn’t know that her married lover has financed vacations (and a car) by playing other games in the stock room.

The auditor Kurka (Rudolf Hrusínský) begins as a potential villain. He seems small-minded, unforgiving and more than a little interested in Alena, who he has watched sunbathing at the enormous public pool not far from work. Pudgy and unattractive, Kurka is plagued with a harpy for a wife (Ann Todd of Breaking the Sound Barrier) and seems alienated from his family as well. Yet, as Vorell’s dishonesty with the company and Alena is clarified, the stodgy Kurka reveals a sensitive and caring side. It’s just that everyone he knows lets him down, and belittles his belief in the rules.

This Noir potboiler has some sexy scenes of Alena and Vorell in bed, as she wonders if his dishonesty is limited only to his inventory-keeping. When events take a wrong turn, Vorell’s actions are predictable — he plays innocent and hopes the blame will fall elsewhere. Alena takes the psychic strain while Vorell suddenly plays the family man at home. Kurka knows something is up, but is unwilling to let his guard down when Alena tries to talk to him. Kurka’s superior asks him not to go to the police just because it’s a big bother. After Kurka puts the punitive wheels in motion, it’s too late to decide that he suspected the wrong person.

Although geographically far removed from the noir style, 90° in the Shade plays as if James M. Cain decided to impose a naturalistic twist on Lubitsch’s The Shop Around the Corner. This is definitely not a comedy, and the insights to human character don’t paint a pretty picture. Vorell and Alena rush around town in the summer heat, buying up a small fortune in other shops’ cognac. But all the effort goes for naught when Bazant drops a bottle — and Alena discovers that Vorell’s criminality is much deeper than he told her. Flashbacks show us why Alena thought him a worthy lover, but now she feels like she’s just been one more unearned perk that Vorell couldn’t afford and cheated to possess. The show expresses Alena’s personal devastation in a way that makes us understand her terrible actions.

The acting is fine throughout. We’re told that Hrusínský’s subtle acting was more method-y than Booth and Heywood’s theatrical approach, but the contrast certainly works. Kurka is a social outsider to be patronized and kidded, and when the time comes for essential communication between him and Alena, the gulf between his needy nervousness and her humiliated distress is just too wide. Director Weiss doesn’t go in for show-off effects. His pre- Prague Spring production is a classic of understatement, with an understanding vision of people under stress.

Powerhouse Indicator’s Blu-ray of 90° in the Shade is a welcome surprise — older references on the web come mostly from people who want to see it but cannot. Powerhouse has given the 91-minute English-language version a new 2K restoration from the original negative, and the 83-minute Czech version is a High Definition remaster. The movie has a look I’ve seen on other B&W Czech films of this era — very light, with grey blacks. In this case it may have been exaggerated to stress the supposed high temperature of the story.

I have a feeling that the authoritative, fascinating disc extras are due to a special interest in the title. Michael Brooke’s feature commentary is so thoroughly researched that we’d think he had lived with the filmmakers. His commentary yields an abundance of cultural observations about working life in mid-’60s Prague, where manager Vorell’s ability to afford a car of his own should have been a red flag to his bosses and co-workers. Powerhouse’s Anthony Nield has written about this show in the past as well. We’re told that the word ‘Tricet’ in the Czech title shifts the number to 30° in the Shade, to reflect the Celsius scale.

Being a typical American reviewer, I had never heard of Jirí Weiss. Powerhouse offers up four short anti-Nazi films made by the director when he was an artist in exile — about the German takeover of Czechoslovakia, Czech pilots in the RAF, and the enormous contribution of Russian women to the war effort. The best is a dramatic film about the Norwegian resistance. It looks so authentic, we wonder where it was filmed.

The fat insert booklet offered with first edition discs has an article on and by Jirí Weiss, and a Nield article explaining those wartime short subjects. The films is often referred to as Ninety Degrees in the Shade but the title on-film uses the 90° configuration.

A 2017 Prague Reporter article on the film’s revival in Czechoslovakia says that Prague’s famed public swimming pools on the Vltava at ‘Obcanská plovárna,’ were devastated by floods in 2002 and no longer exist. The article also has a viewable trailer (of the English-language version).